“Yes, kink belongs at Pride,” reads the headline of writer Lauren Rowello’s Tuesday WaPo piece. “And I want my kids to see it.”

Keep kink in Pride for our kids’ sakes! My latest for the Washington Post. #Pride2021 #kinkpositivity https://t.co/mWHveu1EKR

Rowello, a “gendervague“ person who is married to a transgender woman, described how the couple attended a pride parade where their children were confused to see “a few dozen kinksters who danced down the street, laughing together as they twirled their whips and batons, some leading companions by leashes.”

The term gendervague appears to refer to a person whose gender identity is “inextricably related” to being autistic.

“The man paused to be spanked playfully by a partner with a flog,” Rowello wrote. “‘What are they doing?’ my curious kid asked as our toddler cheered them on.” (RELATED: ‘Drag Queens In Training’: NYC Department Of Education Children’s Show Features 12 Minutes Of ‘Lil Miss Hot Mess’ Reading And Dancing)

The Washington Post writer said that though the children “were too young to understand the nuance of the situation,” Rowello told them that “these folks were members of our community celebrating who they are and what they like to do.” 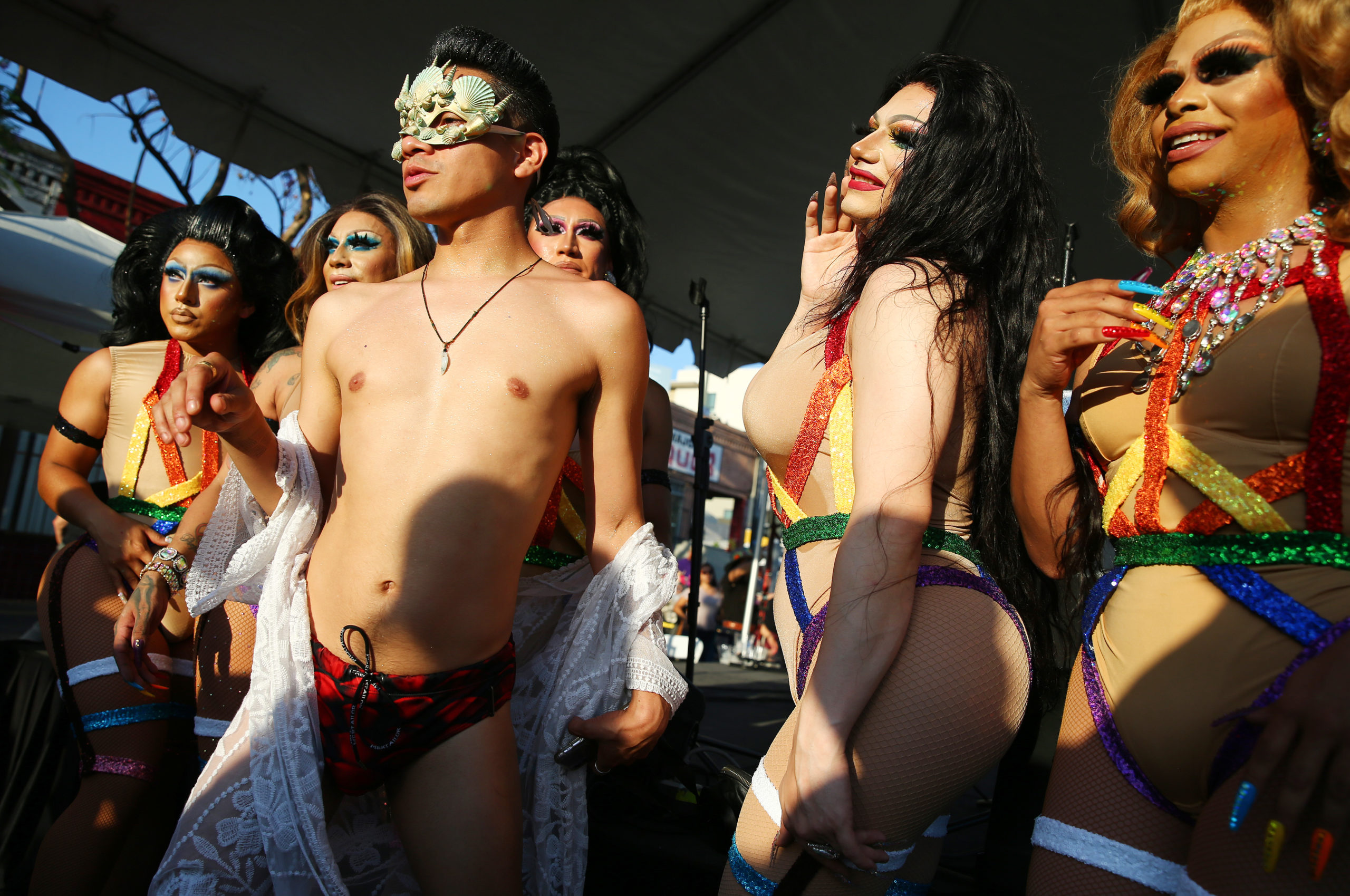 LOS ANGELES, CALIFORNIA – JUNE 27: Drag queens pose with a reveler at the Orgullo Fest (Pride Fest) in the predominantly Latino neighborhood of Boyle Heights on June 27, 2021 in Los Angeles, California. It was the first LGTBQ Latinx pride festival held in the community. The city of Los Angeles’ main pride parade was cancelled this year due to the pandemic. (Photo by Mario Tama/Getty Images)

“Children who witness kink culture are reassured that alternative experiences of sexuality and expression are valid — no matter who they become as they mature, helping them recognize that their personal experiences aren’t bad or wrong, and that they aren’t alone in their experiences,” Rowello wrote.

“Kink visibility is a reminder that any person can and should shamelessly explore what brings joy and excitement,” the writer added. “We don’t talk to our children enough about pursuing sex to fulfill carnal needs that delight and captivate us in the moment.”

“Sharing the language of kink culture with young people provides them with valuable information about safe sex practices — such as the importance of establishing boundaries, safe words and signals, affirming the importance of planning and research and the need to seek and give enthusiastic consent,” Rowello wrote.

“If your ‘principles’ prevent you from running this sickness out of your country, your principles are garbage,” tweeted “I’m Right” host Jesse Kelly. “Nations do not remain stable, healthy nations with this behavior becoming acceptable.”

“In a sane society, CPS would already be on the way,” the Daily Wire’s Ben Shapiro tweeted.

I honestly lack the vocabulary to express the moral revulsion of this article. Absolute cultural degeneracy.https://t.co/1x6vjope9O

Journalist Glenn Greenwald took particular issue with the line: “If we want our children to learn and grow from their experiences at Pride, we should hope that they’ll encounter kink when they attend.”

“This was never a goal and it sure as fuck isn’t one I share or anyone I’ve ever known has,” Greenwald tweeted. (RELATED: DC Parents Bring Children As Young As 9 Months To Adams Morgan Drag Queen Story Hour) 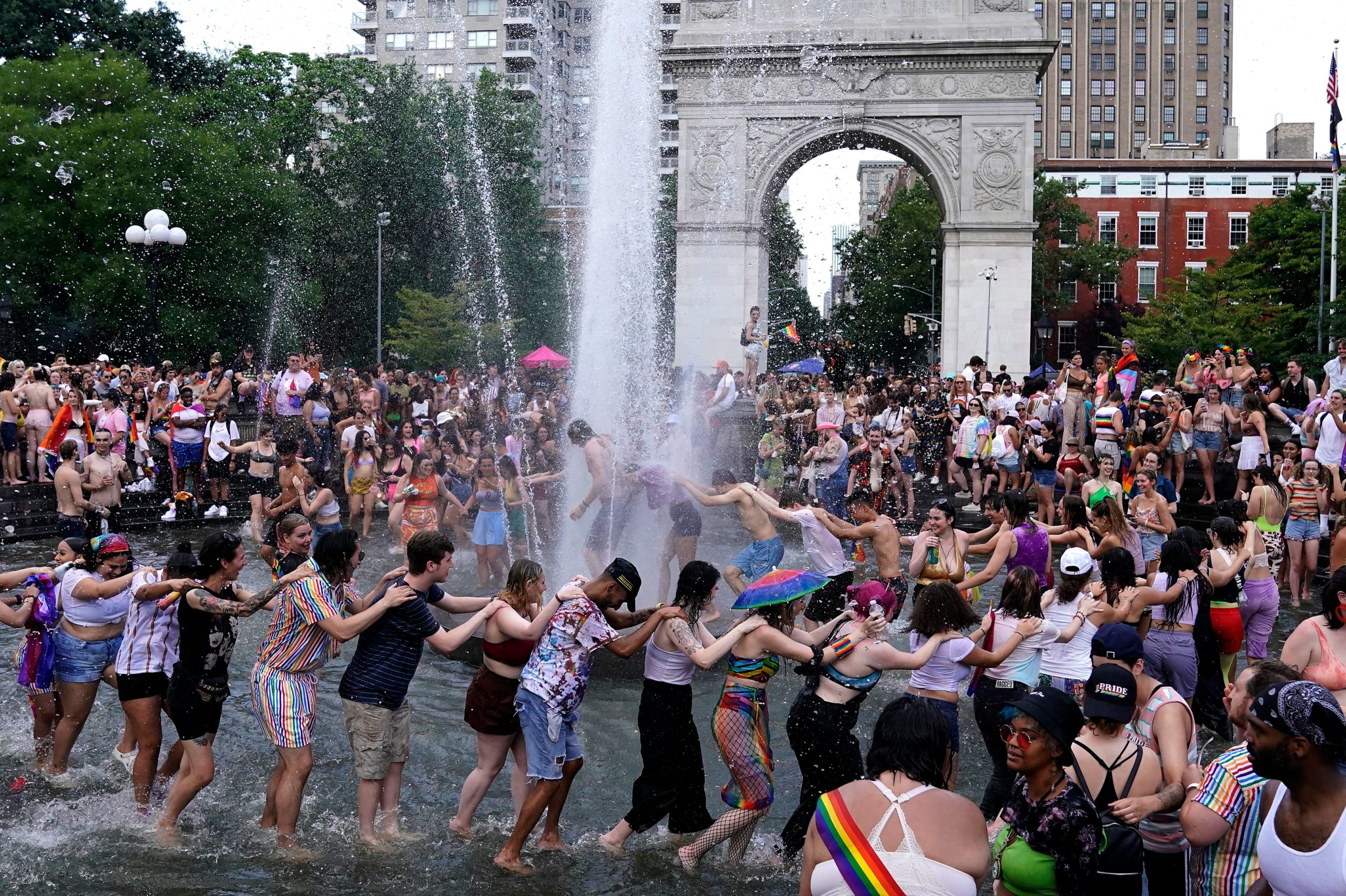 People dance in the Washington Square Fountain during the 3rd annual Queer Liberation March in New York June 27, 2021.  (Photo by TIMOTHY A. CLARY/AFP via Getty Images)

Greenwald added: “The problem is that when a highly funded social movement succeeds in all of its goals, it won’t declare victory and stop: too much money, too much activist bureaucracy and jobs at stake, so it keeps expanding to justify its own existence into unrecognizable areas.”

The title of this WaPo opinion piece is: “Yes, kink belongs at Pride. And I want my kids to see it.” https://t.co/dnGEIRoFnN

The Daily Wire’s Matt Walsh tweeted at Rowello: “You should be in prison.”

You should be in prison https://t.co/nVSAeSoXhX

Walsh also highlighted a tweet from Rowello that includes a picture of the writer’s 8-year-old child, who Rowello referred to as “they,” wearing makeup.

“My 8YO explored makeup for the first time tonight,” Rowello tweeted in May. “They tried an eyeshadow tutorial to make clouds, some flowers (not shown), and lots (and lots and lots and lots) of eyeliner stamps. They shrugged, “Maybe I’ll go on drag race when I’m older.”