Media and Democrats predicted that appointing Justice Amy Coney Barrett to the Supreme Court would result in radical right-wing, Handmaid’s Tale like rulings — but their predictions have not come to fruition.

Barrett’s appointment to the court, replacing the late Justice Ruth Bader Ginsberg, has solidified a solid 6-3 conservative majority. The new justice has so far shown “herself to be committed to upholding the rule of law and the Constitution,” Judicial Crisis Network President Carrie Severino told the Daily Caller News Foundation.

Though Democrats warned that Barrett would immediately take aim at Obamacare, the new justice joined a 7-2 majority in June rejecting a challenge to the Affordable Care Act. (RELATED: Liberal Groups Warned That Kavanaugh Would Push SCOTUS Dramatically To The Right. Their Fears Haven’t Been Met)

“A vote by any senator for Judge Amy Coney Barrett is a vote to strike down the Affordable Care Act and eliminate protections for millions of Americans with preexisting conditions,” then-Senate Minority Leader Chuck Schumer said during her confirmation. “By nominating Judge Amy Coney Barrett to the Supreme Court, President [Donald] Trump has once again put Americans’ health care in the crosshairs.”

Amy Coney Barrett will work to gut Roe v. Wade and the ACA, taking away health care coverage from millions of Americans—including those with pre-existing conditions. And make no mistake: Trump is counting on her to swing the Supreme Court in his favor when he loses this election. pic.twitter.com/cTpOHgintZ

Rather than making huge splashes in her interpretation of hot button cases as many conservatives have called on her to do, the Wall Street Journal reported, Barrett has chosen to interpret narrowly and to join with Justice Brett Kavanaugh and Chief Justice John Roberts over the more conservative justices.

“During her confirmation hearings, Justice Barrett said that she would be her own justice,” Dallas-based attorney Allyson Ho, who has argued cases before the court, told Reuters. “And so far, that’s exactly what she’s done.”

The court unanimously sided with a Catholic adoption agency in a religious freedom case regarding same sex unions, ruling 9-0 that the city of Philadelphia’s refusal to contract with Catholic Social Services (CSS) unless CSS agreed to “certify same-sex couples as foster parents” violates CSS’s free exercise of the First Amendment.

Six of the justices, including Barrett, rejected calls to push further and overturn the 1990 case Employment Division v. Smith — a Supreme Court precedent upholding laws that are generally applicable even if they place a burden on religion. Barrett wrote that she saw “no reason to decide in this case whether Smith should be overruled, much less what should replace it.”

“She came away as a careful member of the court who is not going to be throwing bombs or making sweeping pronouncements, but judging cases on an individual basis,” Barrett’s former student, University of Iowa law professor Derek Muller, told the WSJ. 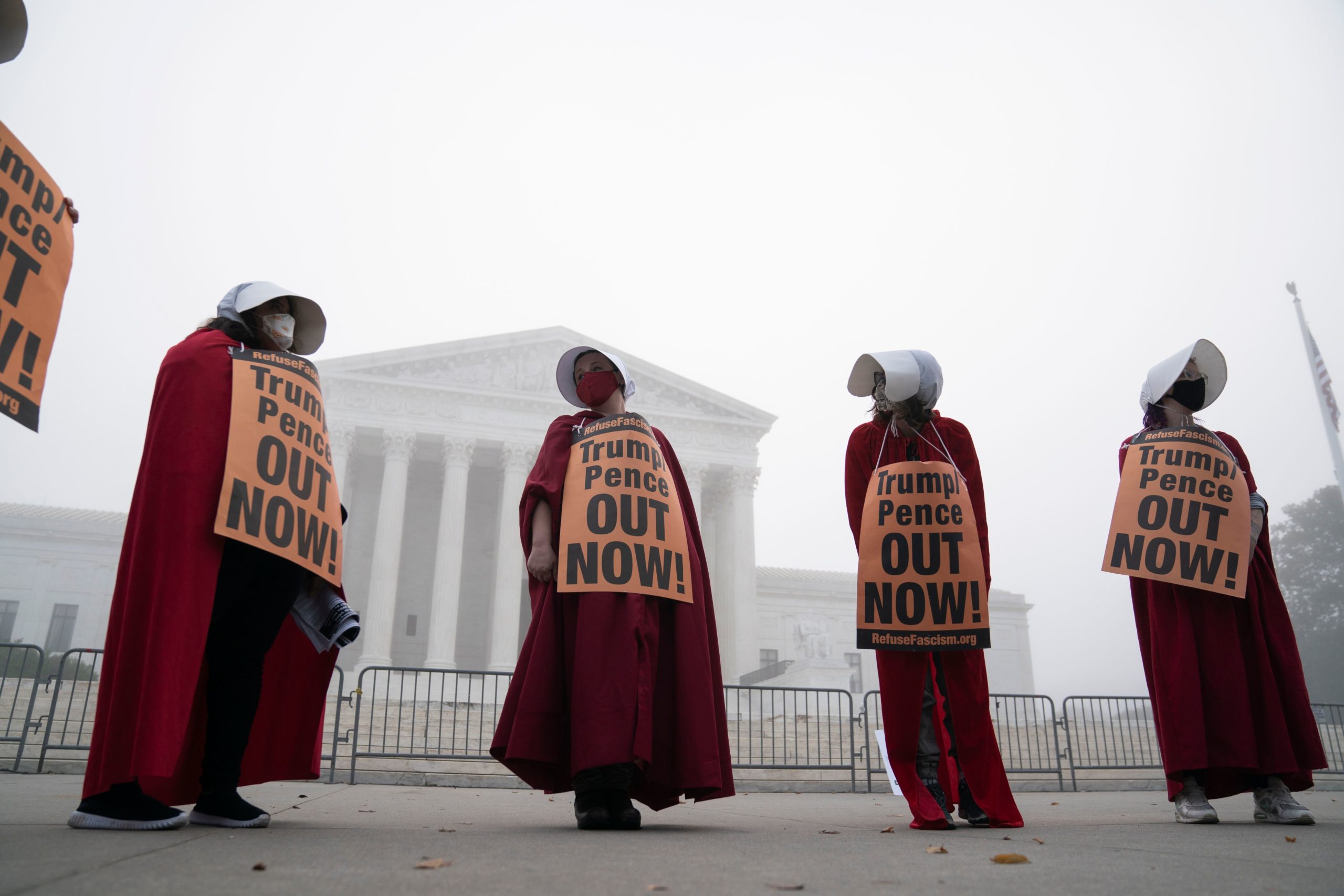 Demonstrators dressed as Handmaid’s Tale protest the nomination of Amy Coney Barrett to be a US Supreme Court Justice at the US Supreme Court in Washington, DC, on October 22, 2020. – The Senate Judiciary Committee approved Barrett’s nomination despite a boycott of the proceedings by Democratic committee members. (Photo by Alex Edelman / AFP) (Photo by ALEX EDELMAN/AFP via Getty Images)

“Throughout her first term on the Court, Justice Barrett has ruled as an independent and thoughtful jurist,” Americans United for Life (AUL) President Catherine Glenn Foster told the DCNF. “She deserves an apology from many in the media who portrayed her as a political activist rather than as a fair judge who is committed to the United States Constitution.”

During Barrett’s confirmation hearings last fall, Democrats, media outlets and activists fixated on Barrett’s adherence to Catholic principles and her large family, suggesting that she was “extreme” and unfit to serve on the Supreme Court.

Media linked Barrett to the Catholic group People of Praise, falsely reported that the group was the inspiration for Margaret Atwood’s “The Handmaid’s Tale,” and even went so far as to suggest that Barrett adopted her children for nefarious reasons.

Hi, only Senator to work at Planned Parenthood here.

Barrett’s views on Roe v. Wade are clear. So I’m making my views on her nomination clear: I’m voting no.

“The conclusion one draws is that the dogma lives loudly within you,” Democratic California Sen. Dianne Feinstein told Barrett during her 2017 confirmation hearings. “And that’s of concern.” (RELATED: Amy Coney Barrett Speaks Out On ‘Dogma’ Charge, Religious Tests For Judges)

“If her religion never made it into her court decisions, she can believe what she wants,” disgraced former congresswoman Katie Hill tweeted last fall. “But, yes, personally, I DO object to any religion that still insists women be subservient.”

Amy Coney Barrett signed an ad calling Roe v Wade “barbaric” and spoke to anti-abortion groups. Now she won’t say whether Roe was wrongly decided. Don’t be fooled: Barrett has an agenda to get on the Court to overturn reproductive rights.

The Washington Post’s Ron Charles highlighted Barrett’s comment that the ultimate goal in life is to build “the Kingdom of God ” — a comment that echoes traditional Catholic teaching on man’s purpose. (RELATED: Media Outlets Link Catholic Group Associated With Amy Coney Barrett To ‘The Handmaid’s Tale’)

Others called Barrett a “Catholic extremist with 7 children” or condemned Barrett as a “rabid fucking lunatic.”

Let’s be explicit: anti-abortion extremists made it clear that this was the goal all along. It’s why they couldn’t wait to rush Amy Coney Barrett onto the Supreme Court before the November election.

Keep your hands off of our health care. https://t.co/HL95SzqKMw 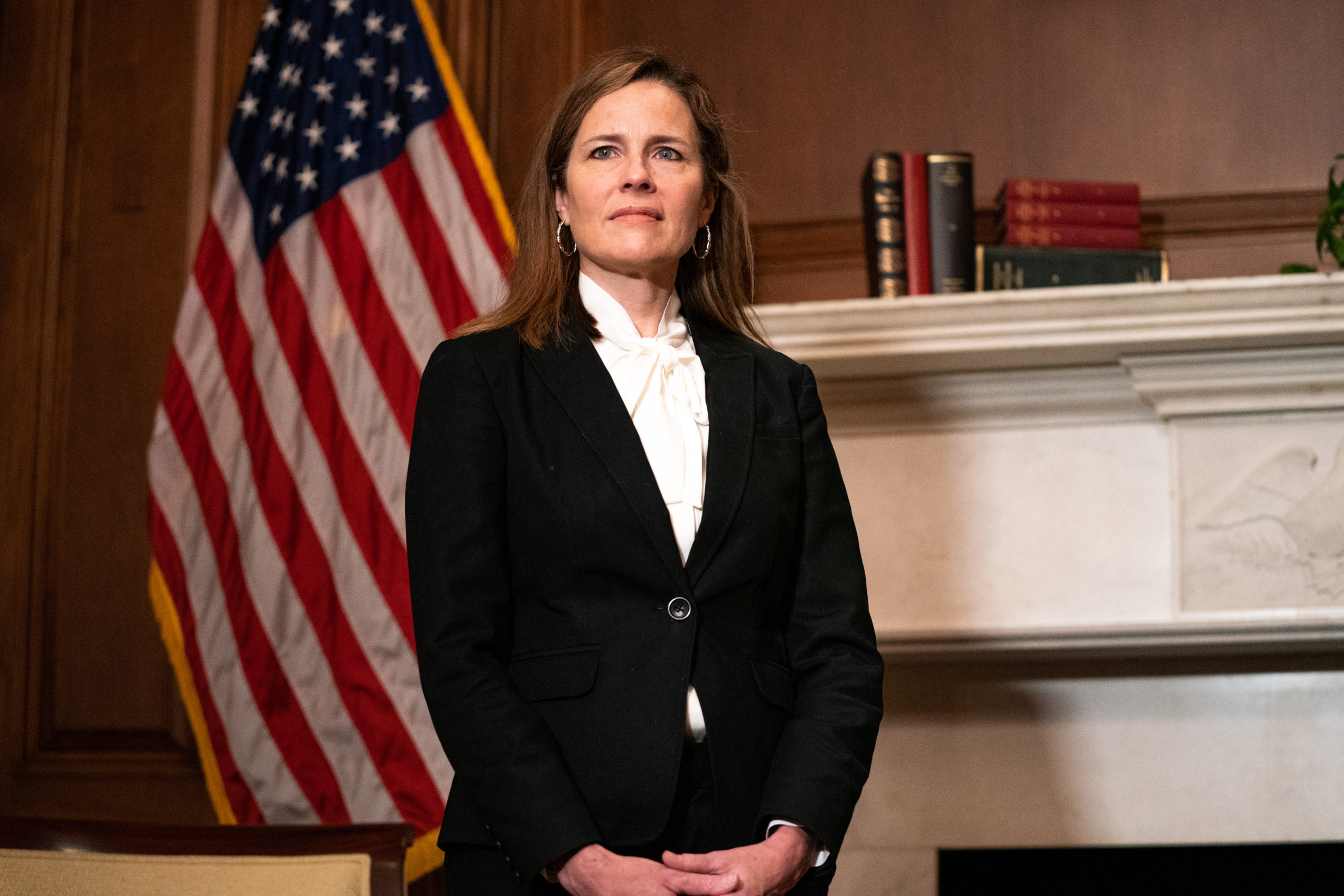 “The fear-mongering we saw from the Left about Justice Barrett during her confirmation—particularly regarding the ACA case—was disappointing but not surprising,” Severino told the DCNF.

The emotional backlash against Kavanaugh’s confirmation escalated following multiple allegations of sexual assault against the future Supreme Court justice. Christine Blasey Ford’s lawyer would later admit that putting an “asterisk” next to Kavanaugh’s name before “he takes a scalpel” to Roe v. Wade was “part of what motivated Christine” to accuse him. 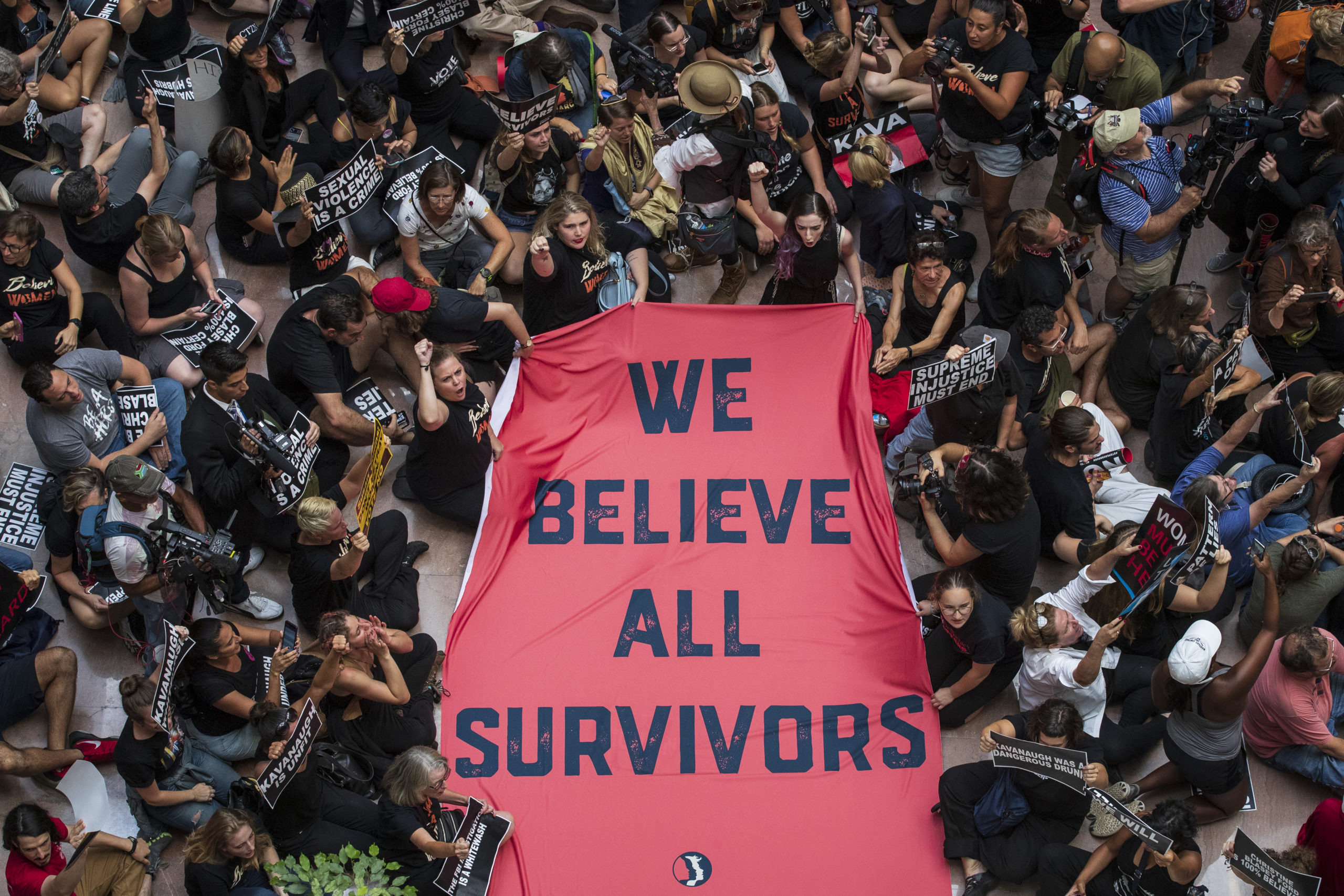 But liberal predictions that Kavanaugh would radicalize the court didn’t come to fruition after the Supreme Court struck down a law that would significantly restrict abortion access: June Medical Services v. Russo, in which an abortion provider challenged a law requiring abortion providers to have admitting privileges to a hospital within 30 miles of the facility.

Chief Justice Roberts sided with the liberal justice for a 5-4 ruling that struck down the Louisiana law. The decision was met with heavy criticism from conservatives, particularly because Roberts also voted with the liberal justices on recent DACA and LGBTQ rulings. (RELATED: Video Shows Anti-Kavanaugh Lawyer Saying Christine Blasey Ford Wanted ‘Asterisk’ By Justice’s Name)

Republican Arkansas Sen. Tom Cotton pointed out to the DCNF in a late June interview that much of the backlash and frenzy over former President Donald Trump Supreme Court picks — Neil Gorsuch, Kavanaugh, and Barrett — stem from anxiety over protecting Roe v. Wade. 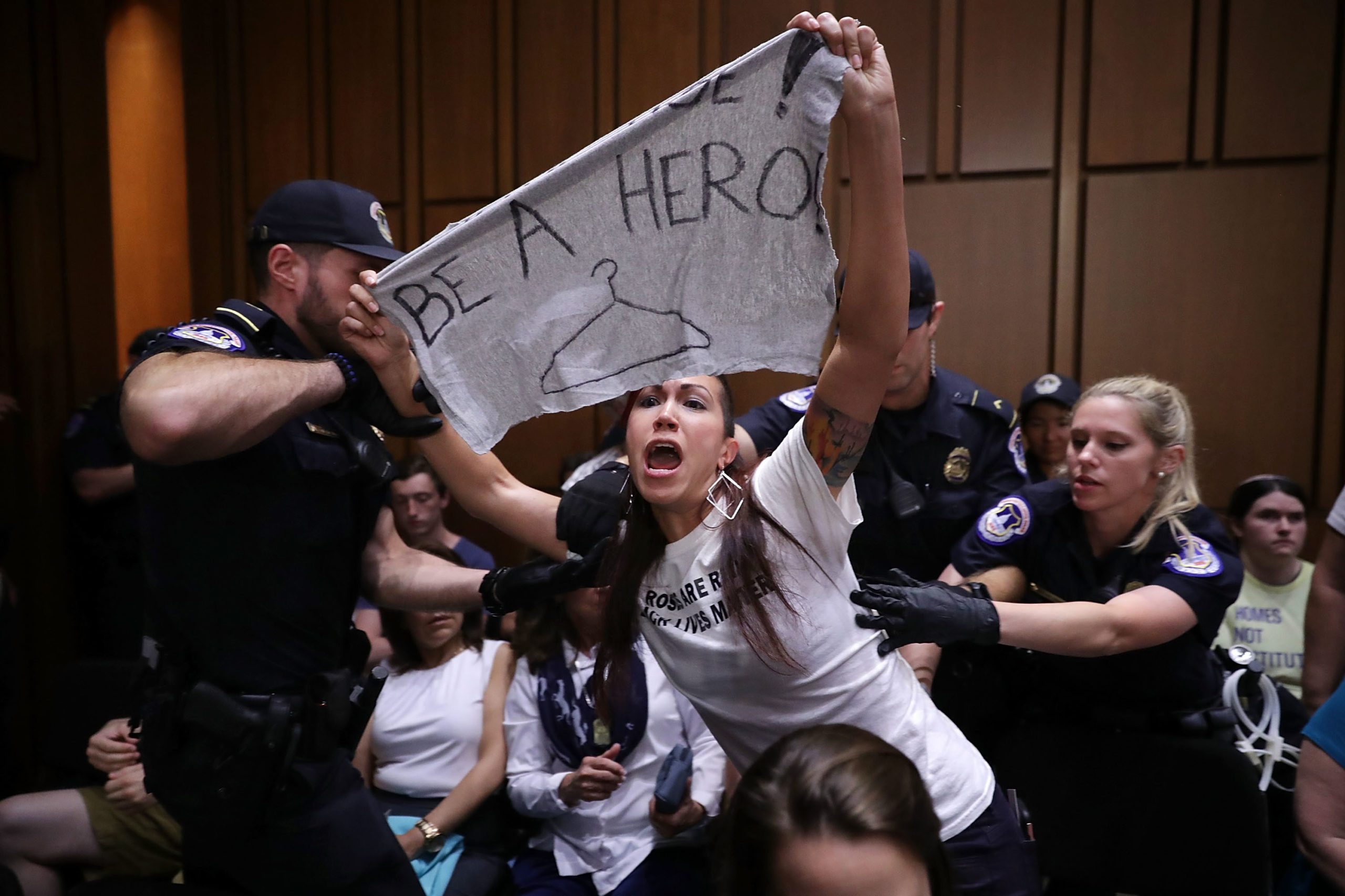 “The stakes were a little bit lower the year prior with Neil Gorsuch because he was replacing Justice Scalia,” Cotton told the DCNF, “but with Brett Kavanaugh replacing Justice Kennedy (who had been a member of the majority in Planned Parenthood v. Casey) the abortion lobby and the abortion industry pulled out all the stops.”

“What happened to Brett Kavanaugh was a disgrace,” Cotton added. “He was attacked and he was smeared without evidence, in fact, contrary to what little evidence there was. So I think you saw just how far they will go, it’s an example of how radical and extreme Democrats have become.”

Though Barrett, Kavanaugh, and Roberts have joined with the liberal justices in several important cases this term, experts predict the impending “blockbuster docket next term featuring clashes over abortion and gun rights” could prove to be the “real test.”

“One of the things about deciding the cases on the narrowest possible grounds is that it makes it easier for more people to agree, who have different world views,” ACLU Deputy Legal Director Louise Melling said during a late June discussion of the new supermajority. “That’s ultimately a good thing for the Court.”

“It’s not a good thing for the Court if they are seen as deciding everything on partisan lines, so I think there will be institutional interests that will continue to drive them to try to decide case narrowly,” he continued. “But as we’ll talk about at the end of this session, there are some pretty big cases coming up for next year that are going to be very hard to decide in ways that don’t divide along partisan lines. So, next term might be the real test.”

Foster told the DCNF that she is looking forward to the upcoming term, predicting that Barrett “will have a chance to rule in favor of constitutional protections for life across the country.” 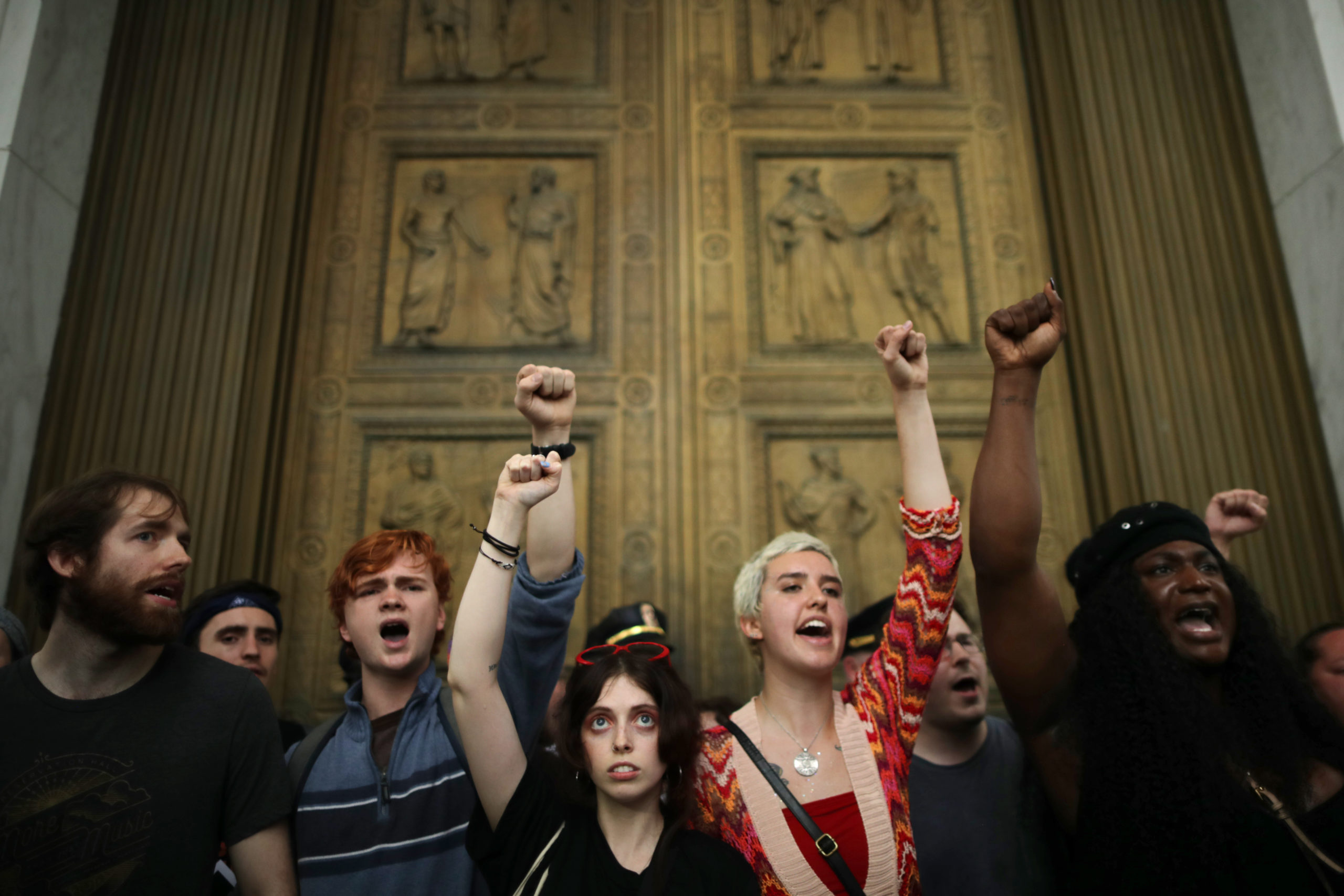 WASHINGTON, DC – OCTOBER 06: After overrunning police barricades, protesters chant as they block the doors to the U.S. Supreme Court while demonstrating against the confirmation of Associate Justice Brett Kavanaugh October 06, 2018 in Washington, DC. The protesters marched up to the doors of the court as Kavanaugh was inside taking his oath. (Photo by Chip Somodevilla/Getty Images)

The court announced in May that it will hear Dobbs vs. Jackson Women’s Health Organization beginning in October, and a decision on the case will likely come by June 2022. This will be the first major abortion case in which all three Trump justices participate.

The case deals with a 2018 Mississippi law banning abortions after 15 weeks, a law challenged by the Center for Reproductive Rights, the law firm Paul Weiss, Rifkind, Wharton & Garrison, and the Mississippi Center for Justice on behalf of the last remaining abortion clinic in Mississippi — Jackson Women’s Health Organization. After the Fifth Circuit Court of Appeals struck down the law in December 2019, the state of Mississippi asked the Supreme Court to take up the case. (RELATED: SCOTUS Rules In Favor Of Abortion Advocates In Major Pro-Life Loss)

Dobbs vs. Jackson Women’s Health Organization will touch on the landmark Roe v. Wade ruling since the Supreme Court will hear arguments on whether abortion bans prior to fetal viability are constitutional, Politico reported.

An unborn baby is considered viable at 24 weeks, though medical intervention and a stay in the newborn intensive care unit (NICU) are usually required this early. Babies born before 23 weeks have a survival rate of about 5% to 6%, and analysis by Charlotte Lozier Institute medical experts found that unborn babies can feel pain as early as 12 weeks.

Justice Roberts failed to provide the needed fifth vote in June Medical Services v. Russo during the 2019-2020 term, voting with the liberal members of the court in the close 5-4 ruling. Following days of emotional protesting when the court took up the case in March 2020, the court ruled in June 2020 that a pro-life Louisiana law violated the rights of both women and abortion providers in the state.

“The Louisiana law imposes a burden on access to abortion just as severe as that imposed by the Texas law, for the same reasons,” Roberts wrote in his opinion. “Therefore Louisiana’s law cannot stand under our precedents. (RELATED: Schumer Warns Gorsuch And Kavanaugh: ‘You Have Released The Whirlwind And You Will Pay The Price’)

His vote may not matter in the upcoming Mississippi case if Barrett joins Kavanaugh, Gorsuch, Alito and Thomas in voting next term.