Media figures and Democrats melted down Monday over a new Texas law that gives Americans the right to sue abortion clinics or individuals who help mothers obtain abortions in the state of Texas.

Texas’ Heartbeat Act, signed into law May 19, bans abortions after the unborn baby‘s heartbeat can be detected (usually by about six weeks). The law, which makes exceptions for medical emergencies but not in cases of rape or incest, gives private citizens both in and out of Texas the power to sue abortion clinics or individuals who help women obtain abortions, according to The Texas Tribune.

This may make the law more difficult to challenge in court, the publication noted. (RELATED: Texas Passes Abortion Ban Protecting ‘Every Unborn Child With A Heartbeat’)

“The law depends on what a woman’s neighbors, associates and friends know about her reproductive health and are willing to tell the authorities to grab a $10,000 bounty,” Rubin wrote. “The possibility of frivolous litigation is hard to quantify.”

MSNBC’s Joy Reid compared the new law to the Taliban and to the dystopian novel and television show, The Handmaid’s Tale. (RELATED: Media Outlets Link Catholic Group Associated With Amy Coney Barrett To ‘The Handmaid’s Tale’)

“So now Texas Republicans are putting bounties on pregnant women,” Reid tweeted. “I almost hate to ask what this benighted party will think of next. This is Talibanism. Are Texas conservatives going to be spying on women of childbearing age and turning them in for the bounties?” 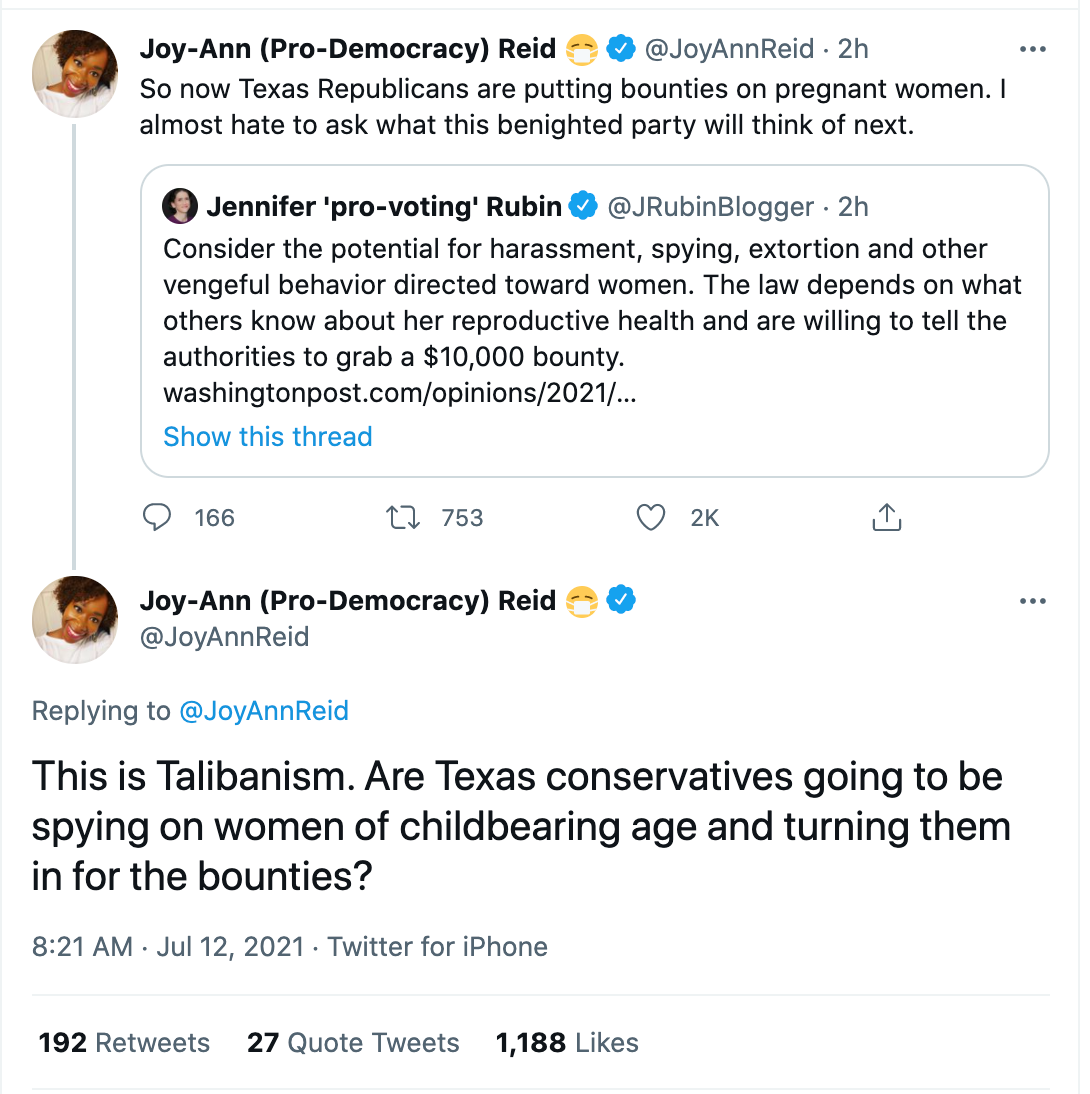 The pro-abortion advocacy group Emily’s List suggested that the law could be used “as a weapon in divorce proceedings, neighborhood feuds, and as a tool for abusive partners.”

“It’s a weapon for oppression,” the group tweeted. (RELATED: Remember When Media Freaked Out Over Amy Coney Barrett And The Right Wing Supreme Court?)

Texas’ new anti-abortion law would let people sue anyone else for helping women get abortions, including nurses, clinics, and friends.

It’s a cruel tactic meant to insulate TX from federal lawsuits. But let’s be clear: it won’t stop us from fighting back.https://t.co/Ps8oRKb4OP

“Your abortion is your business — not a politician’s, not your neighbor’s, and DEFINITELY not a complete stranger’s,” she added.

Like Reid, actress Meredith Salenger likened the ability of private citizens to sue over abortions to bounties.

“This is horrifying,” she tweeted. “It’s like putting a bounty on women and any citizen can go after them like bounty hunters and get $10,000! #TexasShame – Hey antiabortion people… worry about your own life. Don’t get an abortion if you don’t want. but stop this!”