Texas Democrats fled their state Monday for a maskless flight to Washington D.C., with a case of Miller Lites in order to deny a quorum and prevent the passage of a Republican-proposed election integrity bill.

Democratic State Rep. Julie Johnson, who represents an area of Dallas County, tweeted and later deleted a selfie of her and several colleagues on a bus to the airport.

“When it comes to protecting our right to vote, all cards are on the table,” Johnson said in the tweet. “We broke #quorum again today because the Gov & #txlege Repubs chose to bully Texans out of our constitutional rights instead of finding solutions to problems that really exist.”

Twitter users quickly noticed that there was a case of Miller Lite resting on one of the seats. 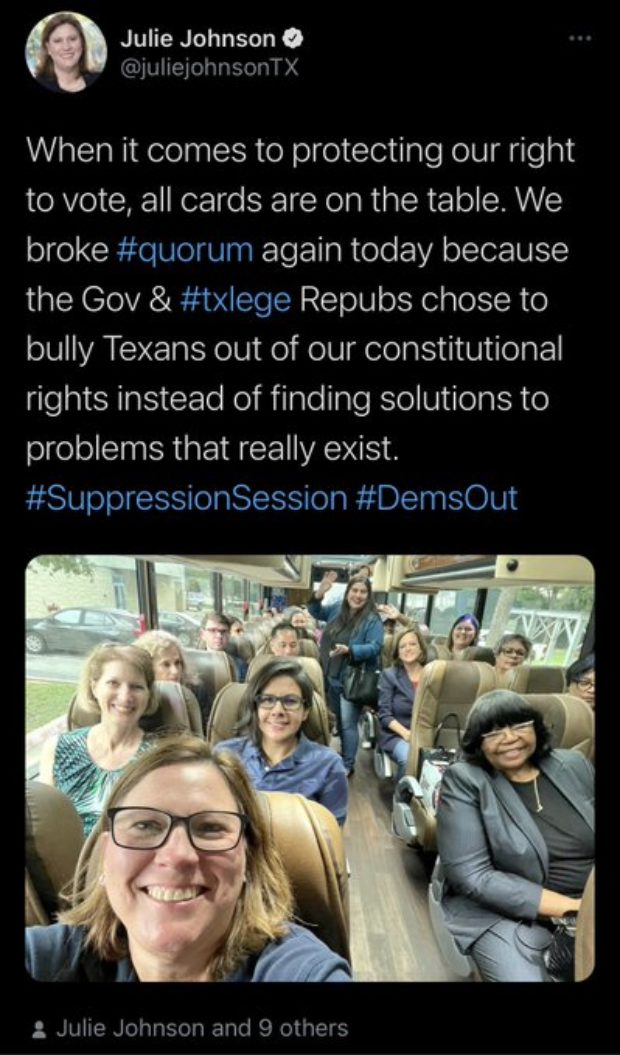 Smiling House Dems fly off to DC on a private jet with a case of Miller Lite, breaking House quorum, abandoning their constituents, while the Senate still works. It’s my hope that Senate Dems report tomorrow to do what they were elected to do. We will vote on #SB1. #txlege pic.twitter.com/5Kcc4emNFg

Images later emerged of the Democrats on their chartered flight to Dulles airport in which all of them went without masks.

Federal guidance currently requires masks on all “onboard commercial aircraft.”

Once the Democrats arrive in D.C., they reportedly plan to rally on behalf of the For The People Act, a Democrat-led proposal to nationalize America’s elections that passed the House of Representatives but has since been stalled in the Senate.

The Republican proposal Texas Democrats seek to block includes new voter ID requirements for voting by mail, prevents elections officials from sending mail-in ballot applications to voters who didn’t ask for one and bans drive-through voting. It also expands the powers available to partisan poll watchers and institutes new criminal penalties for people who improperly assist others with mail-in or in-person voting.

Abbott also ripped into the Democrats for breaking quorum, saying in a statement “as they fly across the country on cushy private planes, they leave undone issues that can help their districts & our state.”