Thousands of children and families are fleeing the Taliban as the insurgents take over more districts in Afghanistan, the Associated Press reported Tuesday.

The insurgent group has displaced over 5,600 families, mostly from the northern districts of Afghanistan where U.S.-aligned forces were concentrated among the region. The region’s ethnic minorities rapidly fled within the last 15 days, the Afghanistan Refugee and Repatriations Ministry recorded, according to the AP.

Around 50 families are living in Camp Istiqlal, a makeshift campsite near the city of Mazar-e-Sharif in plastic tents where outside temperatures reach around 110 degrees by midday, the AP reported. A young girl, Sakina, and her family walked for 10 days to reach the campsite after the Taliban took over their village and burned down their school.

“I think maybe it’s the Taliban and they have come here. I am afraid,” Sakina said of the dark nights spent at Camp Istiqlal, according to the AP. 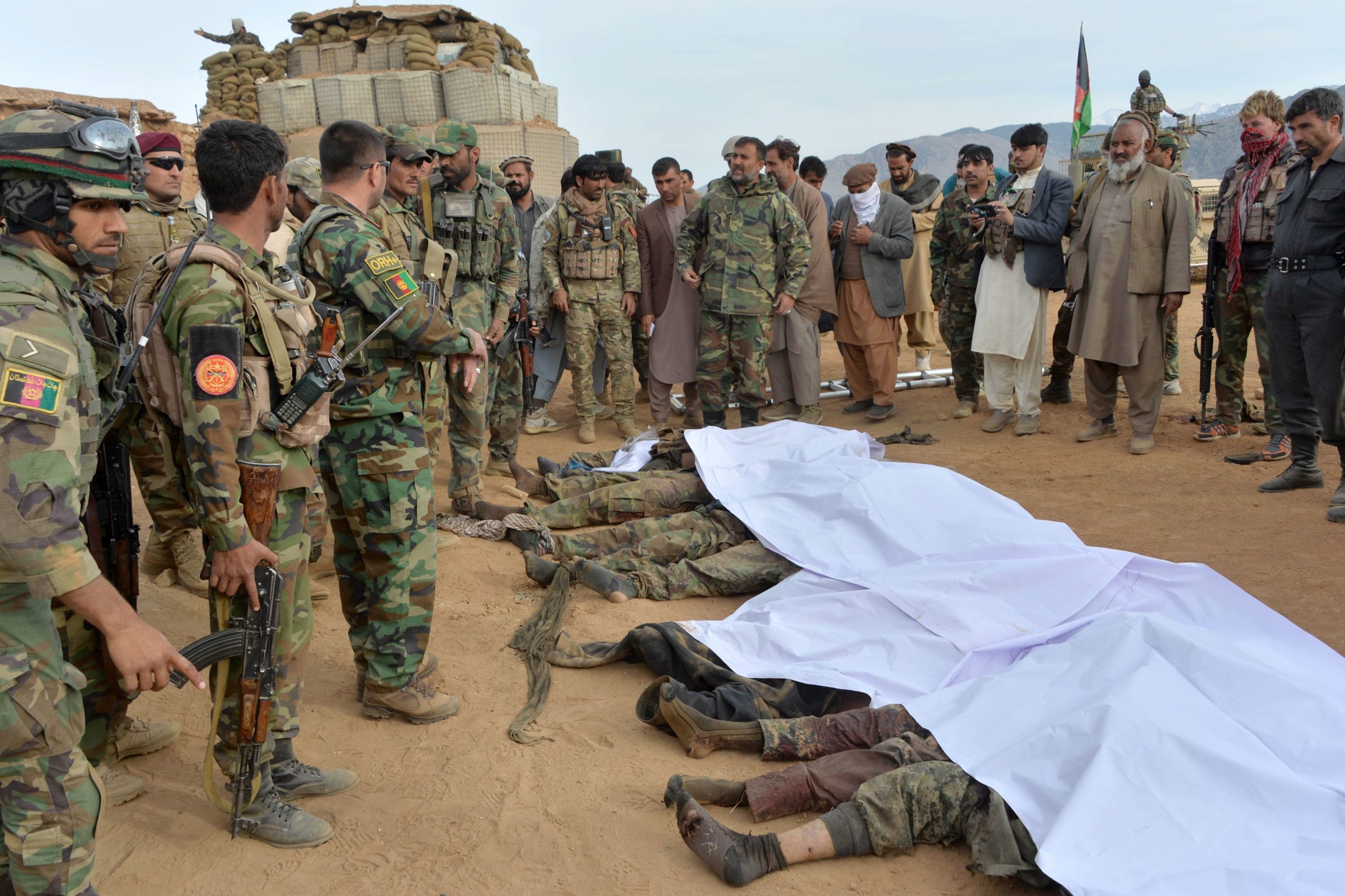 Afgan security forces gather around the bodies of Taliban militants killed during fighting and air airstrikes, in Khogyani district of Nangarhar province on February 12, 2021. (Photo by NOORULLAH SHIRZADA/AFP via Getty Images)

There aren’t any trees to provide shade for the camp and their bathroom is a hole in the ground covered by a tent, according to the AP. Most families arriving in Camp Istiqlal said Taliban commanders used harsh tactics to seize their villages despite pledging not to resort to their previous ways of severe ruling.

When the Taliban showed up at the village of Sang Shanda and tried to intimidate people into staying, Yaqub Maradi fled and several of his family members were arrested, the AP reported. Some of Maradi’s family was “held hostage to stop them from leaving,” he said.

“Maybe he [Maradi’s brother] is released today, but he cannot leave,” Maradi said while in his plastic tent in Camp Istiqlal, according to the AP. (RELATED: REPORT: Taliban Assassinates At Least 7 Afghan Pilots As US Withdraws)

Mohammad Rahimi stepped up as the leader of Camp Istiqlal after fleeing Abdulgan, the AP reported. He said the local militias were no match for the insurgents and several people died in the conflict.

The Taliban have imposed their own taxes in districts under their control including fees on shipments between insurgent controlled districts, according to the AP. The insurgents have attended international conferences and told concerned Afghans that they shouldn’t be worried because the group upholds a less severe practice of Islamic rule.

Around 90% of U.S. forces have withdrawn from Afghanistan and President Joe Biden told Afghani leaders it’s up to them to end the war, the AP reported. The top U.S. commander Gen. Scott Miller resigned from his position Tuesday.