A group of House Republicans led by Ohio Rep. Bob Gibbs and Georgia Rep. Buddy Carter sent a letter to Attorney General Merrick Garland Monday encouraging him to drop an ongoing lawsuit against the state of Georgia over a recently passed election law.

The Department of Justice announced the lawsuit last month after Georgia Republicans defied intense corporate and media pressure to pass the election law in March. Garland contends that the law is aimed at suppressing the votes of Black Americans, with Assistant Attorney General Kristen Clarke accusing Georgia lawmakers of trying to “deny or abridge the right of Black Georgians to vote.”

The new letter, first obtained by the Daily Caller, pushed back on that characterization and argued that Georgia is being targeted for political purposes.

“The Department’s complaint challenges several provisions of Senate Bill 202 that have governed elections in other states across the country for years, including many states led by Democrats, but curiously only Georgia has been sued,” it reads.

“It is obvious that the Department of Justice’s lawsuit against Georgia is politically motivated given how many blue states have voting procedures the left would consider ‘restrictive’ or ‘oppressive,'” Rep. Gibbs told the Daily Caller. “Yet those states are not being targeted by an increasingly politicized DOJ.” 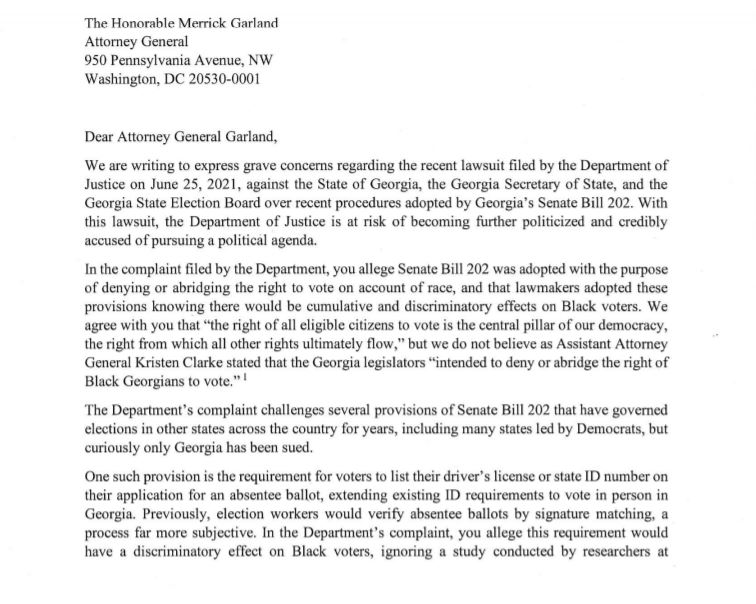 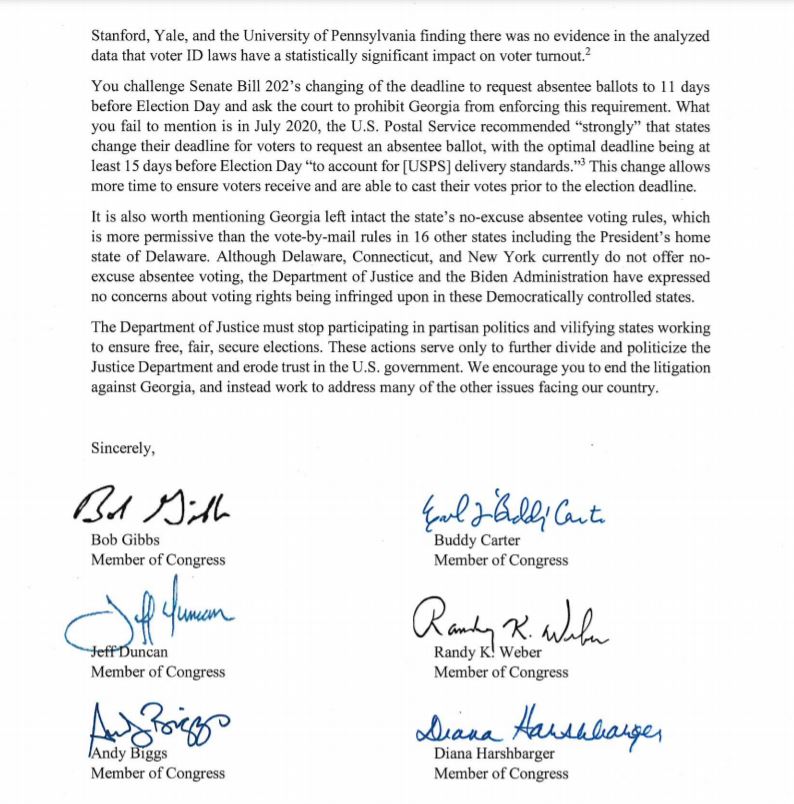 Among the provisions in the Georgia law are an expansion of early voting hours, a new voter ID requirement for absentee ballot applications and a ban on campaign workers providing snacks and water to voters while they wait in line. (RELATED: ANALYSIS: The Left’s Predictable Playbook For Canceling Georgia)

In April, the Georgia Secretary of State’s Office reported that less than 10,000 registered voters in Georgia do not have a state ID associated with their registration, and the Republicans’ letter cites a study from researchers at Stanford, Yale and the University of Pennsylvania which found in 2017 that it could not be concluded from the available data that voter ID laws suppress minority voter turnout.

“The mainstream media spent weeks intentionally misleading the public on the contents of Georgia’s election reforms and President Biden made up lies about it, letting a false narrative set in,” Gibbs added. “This false narrative is giving political cover for the DOJ to file this lawsuit, which is almost surely going to fail after the Supreme Court’s recent ruling on Arizona’s election reforms.”

The letter also highlighted parallels between Georgia’s provisions and those that exist in many blue states.

“It is also worth mentioning Georgia left intact the state’s no-excuse absentee voting rules, which is more permissive than the vote-by-mail rules in 16 other states including the President’s home state of Delaware… the Department of Justice and the Biden Administration have expressed no concerns about voting rights being infringed upon in these Democratically controlled states,” the letter said.

“Power hungry Washington Democrats will stop at nothing to federalize our elections. When the legislative attempt failed, they weaponized the Department of Justice to attack states that don’t ascribe to their woke, socialist agenda,” Rep. Carter told the Daily Caller. “If Joe Biden actually cared about voting rights, he’d be suing Delaware, New York, Massachusetts, and Connecticut which have more restrictive voting laws than Georgia.”

A number of corporate entities threatened to cut off business with Georgia over the law, including Major League Baseball, which moved its all-star game to Colorado. Colorado, led by a Democratic governor, has highly similar voting laws to Georgia. (RELATED: Will Smith Pulling Movie Production Out Of Georgia Over Election Integrity Law)