A reporter for CBS News announced Thursday that she had quit her job, warning that “access to abortion is disappearing” and calling for “a lot of coverage” and “attention” to this “pivotal moment for abortion rights.”

“Personal news: I quit my job at CBS News,” Former CBS abortion reporter Kate Smith tweeted Thursday afternoon. “Covering a beat like reproductive rights at such a legendary institution has been an amazing experience. Thank you to the people that made it possible: My talented colleagues & the courageous people that trusted me to share their stories.”

Smith, who has frequently been criticized for displaying overt pro-abortion sentiment in her reporting, went on to say she could now express her opinions on abortion since she was no longer a reporter. (RELATED: Major Abortion Groups Assemble, File Lawsuit Over ‘Unthinkable’ Texas Law Allowing Americans To Sue Abortion Clinics, Doctors) 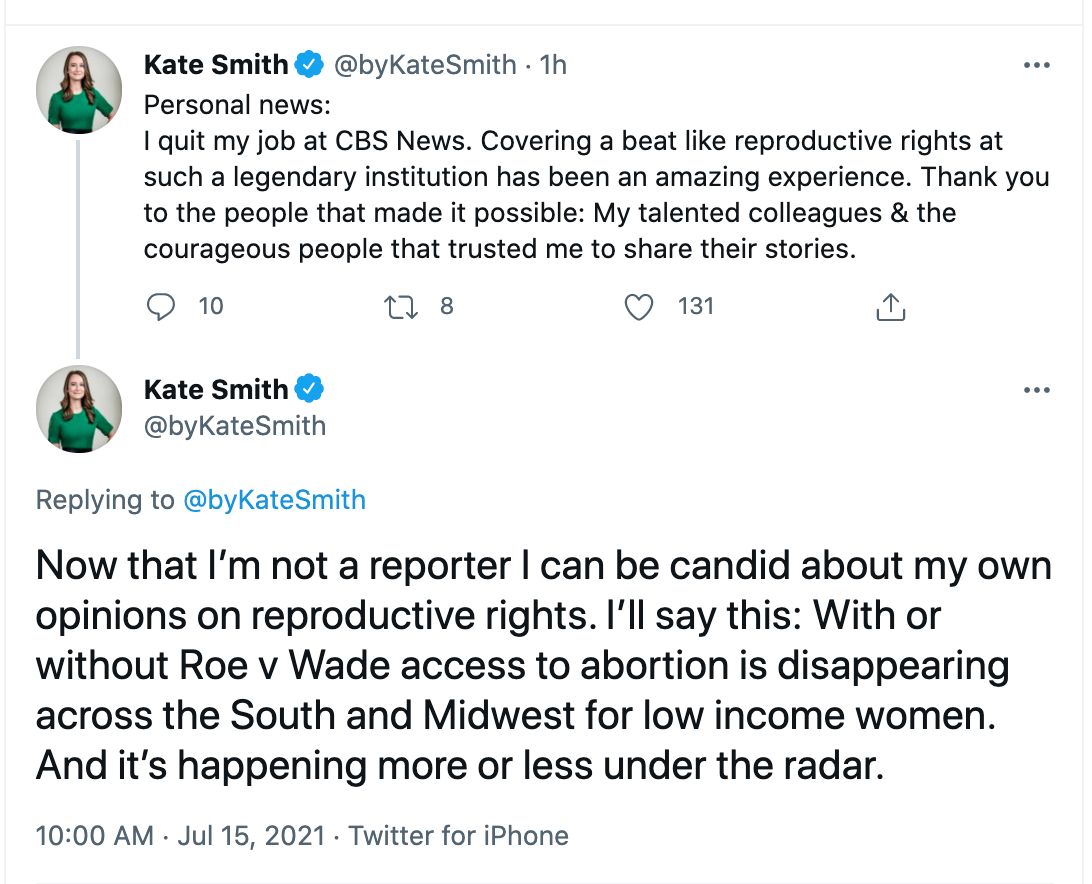 “Now that I’m not a reporter I can be candid about my own opinions on reproductive rights,” she continued. “I’ll say this: With or without Roe v Wade access to abortion is disappearing across the South and Midwest for low income women. And it’s happening more or less under the radar. It’s a pivotal moment for abortion rights, and one that deserves a lot of coverage and our attention.”

“Editors, I know there’s reader and viewer fatigue when it seems like the millionth six-week ban,” she added, before offering her “TV-friendly” clothing to other reporters covering abortion. “But it still major news and ought to be covered.”

Neither Smith nor her former employer CBS immediately responded to requests for comment from the Daily Caller News Foundation. (RELATED: ‘This Is Talibanism’: Media Melts Down Over Law Giving Americans Power To Sue Abortion Clinics, Doctors)

“Kate Smith is not a reporter at all,” wrote the National Review’s Alexandra DeSanctis in April 2020. “She is an advocate for abortion rights who exploits her perch at CBS to disguise as fact the opinions of the country’s most radical abortion-rights activists. She is Planned Parenthood’s ambassador to CBS, posing as a reporter and constructing articles that more closely resemble press releases for the nation’s most powerful abortion-rights advocacy groups.”

“She has traded her objectivity for access to these organizations, offering them the kid-glove treatment so they will permit her to be the first to publicize their PR campaigns, interview their leaders, and scoop their briefs in court cases,” DeSanctis added.

Smith pushed back Thursday on critiques that she showed her pro-abortion stances in her writing. Ryan Scott Bomberger, the founder of the pro-life Radiance Foundation whose mother was raped but chose not to abort him, told Smith that her views are “clearly stated” in her “completely biased coverage.”

“Everyone knows you’re pro-abortion,” he tweeted. “It’s not a secret.”

“It’s stupid trolls like you that make covering this beat so difficult for reporters,” she responded. “Congrats.” 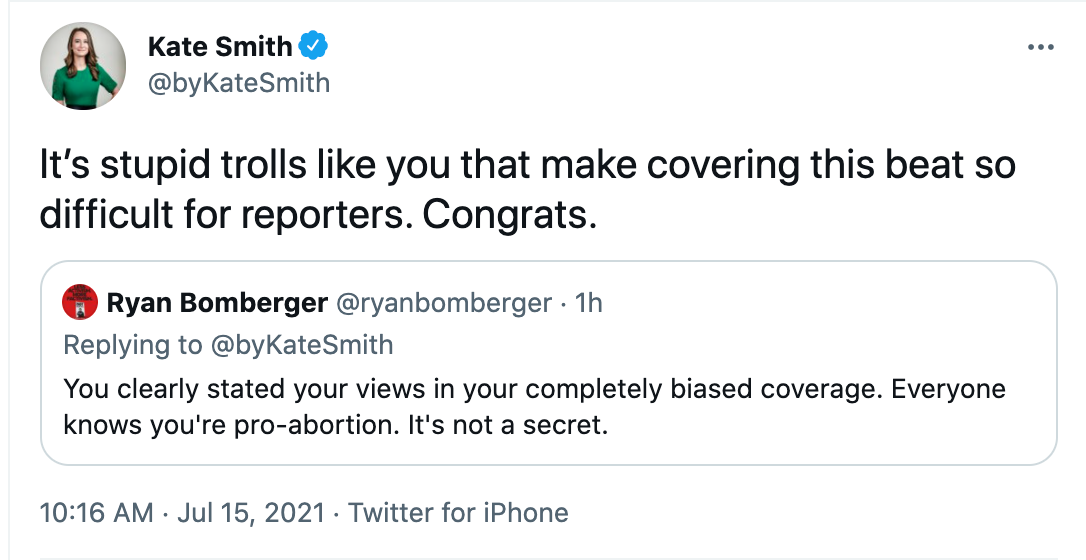