The city of Chicago saw a violent weekend with 56 shootings, including 11 fatalities, ABC 7 reported Monday.

The recent spike in violence has led to Democratic Chicago Mayor Lori Lightfoot announcing Saturday a federal strike force that will be in the city this week to support the Bureau of Alcohol, Tobacco, Firearms and Explosives, according to ABC 7. Democratic President Joe Biden promised Lightfoot to help the city crackdown on gun trafficking in early July.

“What the President conveyed to Mayor Lightfoot is that he will continue to work with her, in partnership, and work with cities around the country to address the rise of cri- — of violence and, specifically, the rise of gun violence was — is predominantly the driver in Chicago,” said White House Press Secretary Jen Psaki at a July 8 press briefing. 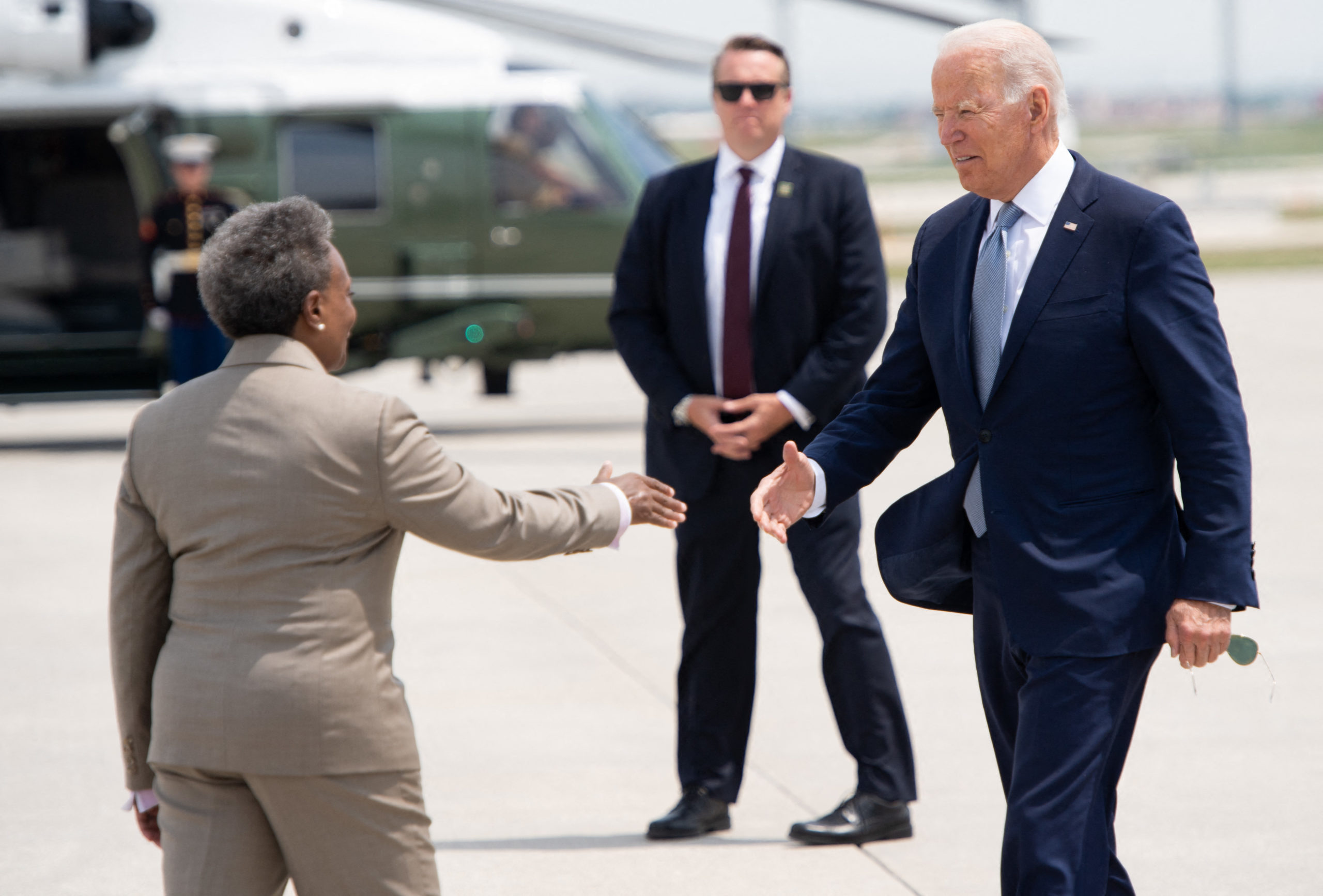 US President Joe Biden greets Chicago Mayor Lori Lightfoot as he disembarks from Air Force One upon arrival at O’Hare International Airport in Chicago, Illinois, July 7, 2021. (Photo by SAUL LOEB/AFP via Getty Images)

Many of the recent shootings include children and teenagers.

An 8-year-old boy and a 28-year-old man were wounded when someone in a black SUV fired shots early Sunday, according to ABC 7. The boy was sent to the hospital and is in good condition, and the man was treated and released on scene.

Six people were shot outside a party Saturday night in Austin, including a 12-year-old girl and four teenagers who are in fair condition, according to ABC 7. The group was on the sidewalk when someone in a dark-colored SUV fired shots.

“My hope is that this million-dollar reward fund incentivizes people to step up, to speak out and to help us to reclaim our streets from the shooters and the violence.” https://t.co/fG61YJyehi

73-year-old Keith Cooper was beaten by two men when they tried to steal his vehicle as he was running errands. The two carjackers repeatedly punched Cooper in the head, leading him to suffer from cardiac arrest at the University of Chicago Medical Center.

Lightfoot’s office and the Chicago Police Department didn’t immediately respond to a request for comment from the Daily Caller News Foundation about the recent uptick in violence. (RELATED: ‘Things Are Getting Much, Much Worse’: College Student Rips Mayor Lightfoot After Classmate Dies)

Psaki attributed the country’s rising crime to gun violence in June. “I’m not going to get ahead of his comments or remarks later this week, but it is an area where the president feels a great deal of the crime we’re seeing as a result of gun violence,” Psaki said.