The debate surrounding mandatory coronavirus vaccinations has raged across the nation for months, with several companies strongly encouraging the vaccine but many stopping short of an official mandate. Things could soon change, however, once the Food and Drug Administration (FDA) grants full approval to vaccines, according to public health experts.

“I think once the vaccines go through full FDA approval, everything should be on the table, and I think that everything will be on the table at the level of municipalities, states, employers, venues, government agencies,” former COVID-19 response coordinator for the Biden administration Andy Slavitt said, according to NBC News.

Slavitt said that if the FDA grants full approval for vaccines, federal agencies should require employees to get vaccinated, according to the report.

“I think every government agency ought to rethink what’s appropriate,” he reportedly said. “There are a number of people in surveys, by the way, who say precisely these words, ‘I’m not going to take it, unless it’s required.'”

But the debate around the legality remains ongoing.

“The way federal rules are written, if a drug or vaccine gets emergency use authorization, you cannot be required to get that particular product,” epidemiologist and professor Brian Labus said, according to KSNV. “Until we have the full FDA approval of the vaccines, we can’t make them mandatory.”

The statute has not been interpreted by the courts, and could likely be interpreted to mean that mandates are not permitted under the first clause of the provision or that individuals could refuse the mandate and face undetermined “consequences.” 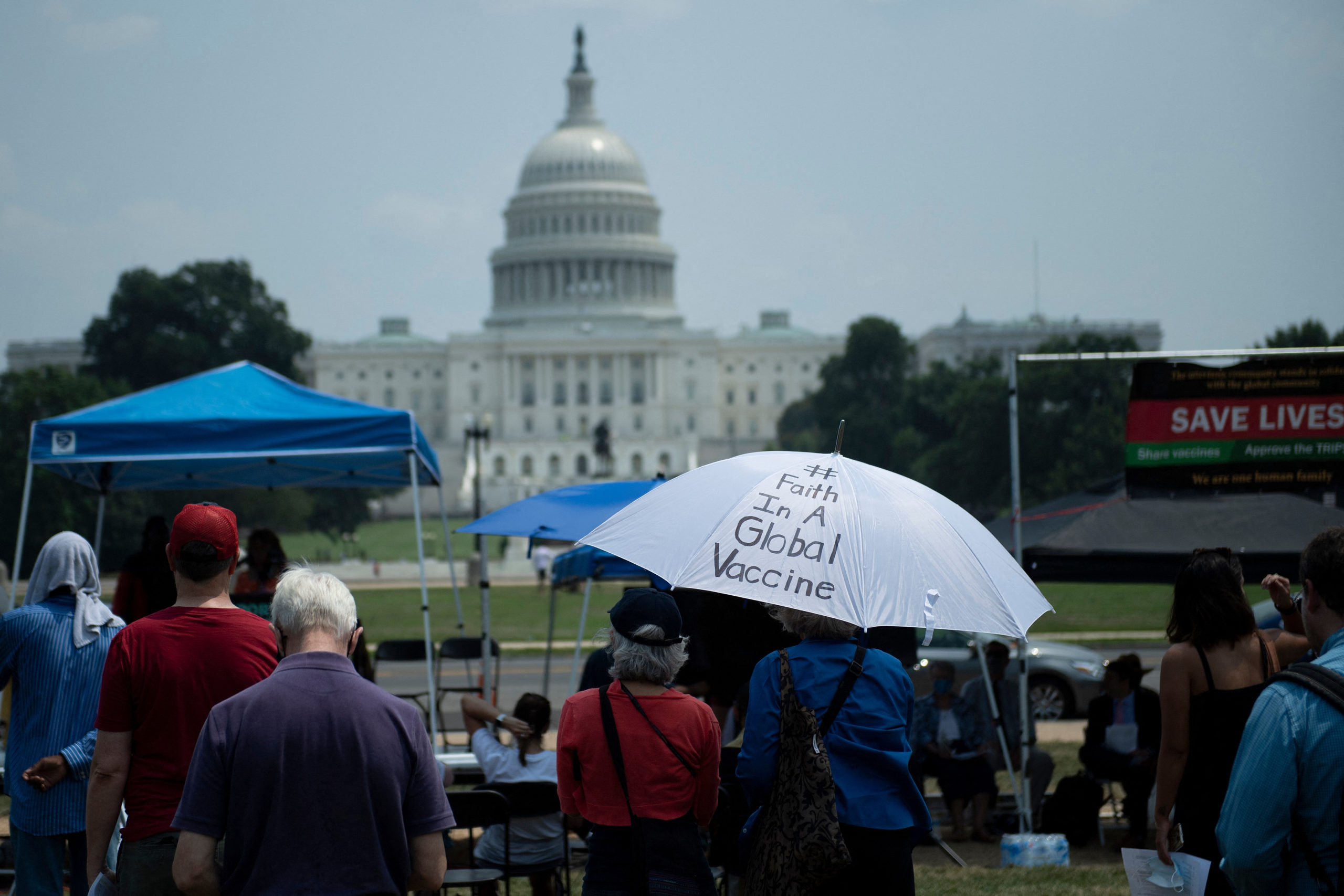 People hold a prayer vigil for the more than 4 million lives lost to Covid-19, on the National Mall near the US Capitol (rear), July 20, 2021, in Washington, DC. – (BRENDAN SMIALOWSKI/AFP via Getty Images)

While vaccines are not mandatory nationwide yet, there have been several ways to get around a mandatory vaccine. For example, a vaccine passport has increasingly been thought of as a way to track who has received the jab. In Los Angeles County, individuals who received the vaccine can sign up via text to receive information about their vaccine, which could be used to board planes and get into events, according to CNBC.

The digital ‘passport’ is welcomed by certain industries, such as airlines, which are trying to make a comeback after a sluggish 2020.

“The world is leaning towards a requirement for something to be able to illustrate that you’ve had your test or vaccine in order to be able to allow for travel,” Senior Vice President at the International Air Transport Association Nick Careen said, according to CNBC. “We cannot do this manually for the entire planet. Ultimately we need to get digitization.”

Other companies are offering incentives to employees to receive the vaccine, such as grocery store chain Aldi, which compensated employees with two hours of pay for each vaccine dose they received, according to CNN. (RELATED: There Will Be No Federal Mandate For Vaccine Passports, White House Says)

A study among CEOs of large companies found 72% were in favor of imposing a vaccine mandate in some capacity, according to CNN.

So far, several states have passed legislation or are considering measures that would prevent businesses and state and local governments from restricting non-vaccinated Americans. Montana banned vaccine passports and prohibits state agencies and businesses from requiring citizens to show proof of vaccination before providing a service. Texas and Florida also passed similar legislation.

Despite statewide measures to stop vaccine mandates, the matter will likely have to be decided in court.

A federal judge in Indiana declined Sunday to issue a preliminary injunction against Indiana University’s vaccine requirement for students and employees. Eight students claimed that the mandate violated their constitutional rights and state law. The mandate will stay in place until the case is decided. Those who opt out with religious and medical exemptions must wear face masks and take frequent COVID tests.

Other schools have already instituted vaccine mandates, such as Rutgers University which stipulates students must get the vaccine in order to return to in-person instruction.

Overall public sentiment is split along party lines. A CBS News-YouGov poll from June found 79% of Democrats believe a private business should be allowed to mandate the vaccine while only 39% of Republicans agreed.