Members of an “anti-racist” Facebook group, including a member of the Loudoun County school board, secretly planned to get a gym teacher fired by disrupting “school activities,” according to screenshots obtained by Daily Caller.

The group, “Anti-Racist Parents of Loudoun County,” targeted Leesburg Elementary School gym teacher Tanner Cross after he had publicly opposed a proposed policy regarding transgender students, these Facebook conversations shared with Daily Caller show. A court decision ordering Cross’s reinstatement after he sued with the assistance of the Alliance Defending Freedom (ADF) is currently being appealed by the Loudoun County school board.

An “action item” regarding Cross was posted in the group on June 1. In March, a post in this group calling for the creation of a list of parents opposed to the use of critical race theory in Loudoun County public schools with the intention to “expose these people publicly” came to light and triggered a recall campaign aimed at six members of the Loudoun County school board. (RELATED: Teachers, CRT Advocate Discuss How To Sneak Teaching About ‘White Privilege’ Past ‘Trump Country’ Parents) 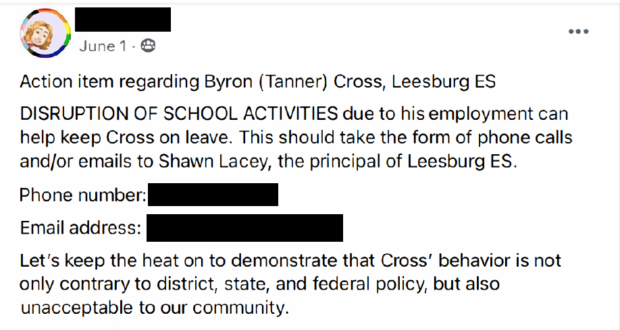 (In this June 1 post, members of “Anti-Racist Parents of Loudoun County” were urged to disrupt school operations to keep Tanner Cross on leave)

“Action item regarding Byron (Tanner) Cross, Leesburg ES,” the post began. “DISRUPTION OF SCHOOL ACTIVITIES due to his employment can help keep Cross on leave. This should take the form of phone calls and/or emails to Shawn Lacey, the principal of Leesburg ES.”

“Let’s keep the heat on to demonstrate that Cross’ behavior is not only contrary to district, state, and federal policy, but also unacceptable to our community,” the post said.

An earlier post had targeted Cross after he publicly spoke out against policy 8040 (with an accompanying regulation), which addresses the rights of transgender students, during the May 25 school board meeting.

On May 31, Beth Barts, a member of the Loudoun County school board, posted to the group but cited a different policy that prohibited “[d]emeaning or otherwise harmful actions” across a range of characteristics that included gender identity and gender expression, saying, “I want to remind the community that we already passed a policy referring to gender expression. We passed this policy months ago.” 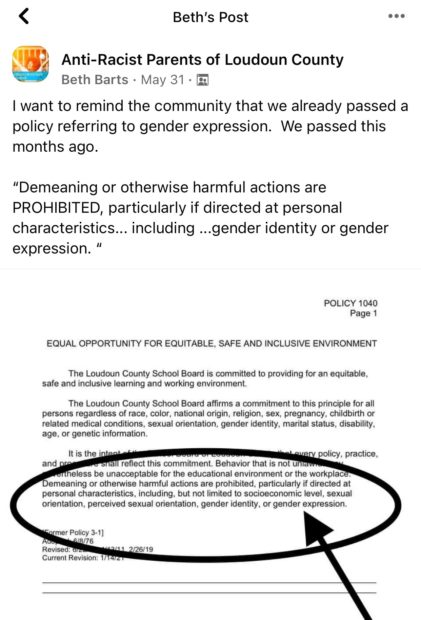 Barts sent Loudoun County Public Schools superintendent Scott Ziegler an email on May 26 concerning the statement by Cross during the school board meeting. The Daily Caller obtained a number of emails sent to Loudoun County Public Schools officials regarding Cross. At least a dozen of those emails were from members of the secret Facebook group, according to a partial list of members obtained by the Daily Caller. (RELATED: Anti-CRT Activist Says She Was Targeted In Harassment Campaign) 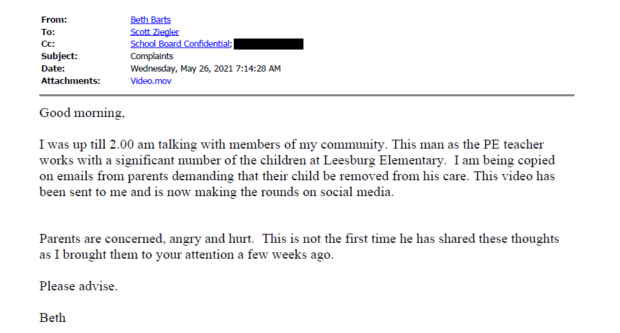 Prior to the case involving Tanner Cross, Kiara Jennings, the chairwoman of the Minority Students Achievement Advisory Committee (MSAAC), called for the firing of teachers opposed to critical race theory in March. That committee also said that opposition “can and will be silenced” on social media. In June, a draft policy circulated that was seen as targeting the First Amendment rights of teachers and staff who opposed either critical race theory or new policies regarding transgender students.

The ADF did not immediately respond to the Daily Caller’s request for comment.