In a viral public confrontation, a transgender council member confronted the owner of a Washington Star Wars shop over a sign that reads “If you are born with a dick, you are not a chick.”

“Everybody loves it,” Sucher can be heard telling Meskis in the video. “They take pictures of it. They post it. 9/10 customers love it.”

“No, what you’re spouting is bullshit,” Sucher tells the transgender council member, who responds, “No it’s not. Trans women are women, sir, that sign is bullshit.”

“If you are born with a dick, you are not a chick”

An elderly business owner in Aberdeen, WA was confronted by trans councilwoman Tiesa Meskis (@valasule) over a sign she found offensive. She & an antifa group have announced a direct action outside the shop on 7 Aug at 10 am. pic.twitter.com/2Ukbjs2jAN

The video shows Sucher and Meskis continue to argue before Sucher tells Meskis, “You know what, nobody confronts your ass. That’s the problem. If they say, what the fuck is going on…Do you know how many people you have embarrassed in city hall? They have to tolerate this shit?”

“Every time some bull shit like this happens, my sales go up because people are wanting this,” Sucher told the transgender council member. (RELATED: Liberal Activists Rebrand Sex Changes As ‘Gender-Affirming Medical Care’ To Bully State Officials Into Allowing The Mutilation Of Children)

“Really? We’re going to show them this side of you,” Meskis says, apparently referring to the video, “Hopefully we can wake you up. Let’s wake you up to the truth sir.”

If you think this shop owner is a legend pleas share this 👇🏼😂 pic.twitter.com/UXGg6q71YD

“I don’t care what they do, but don’t come in here and complain to me about stuff. I have free speech,” Sucher told KING 5 on Thursday. (RELATED: EXCLUSIVE: DeSantis Says He Would Ban Trans Surgeries For Minors)

“I don’t give a [expletive] about feelings anymore,” Sucher told the publication. “I went to Vietnam to fight for all this [expletive]. Do you think I care about some [expletive] feeling? Absolutely not!”

Meskis told the publication that though Sucher has a right to say what he wants, Meskis wanted to tell him that his comments were hurtful.

“We are people,” Meskis told King 5. “We are who we are and we all want to be accepted in our community.”

Meskis plans to demonstrate outside the store on Saturday morning with supporters, according to KING5.

Neither Meskis nor Sucher immediately responded to requests for comment from the Daily Caller News Foundation, but Sucher & Sons Star Wars Shop is quickly garnering hundreds of positive Google reviews praising Sucher and his store.

The five star reviews contained comments such as “The owner is a legend, pretty neat store,” “Just to counter all the haters, don’t like him stay out of his shop,” “Based. World would be a better place if we all had a grandpa like him,” “This is the way,” “Love the shop and the owner. Thank you for your service to the country. We support you :),” and “Stand strong and thank you for your service!”

Multiple reviewers asked for Sucher to set up an online store or Shopify account so that they could support him. 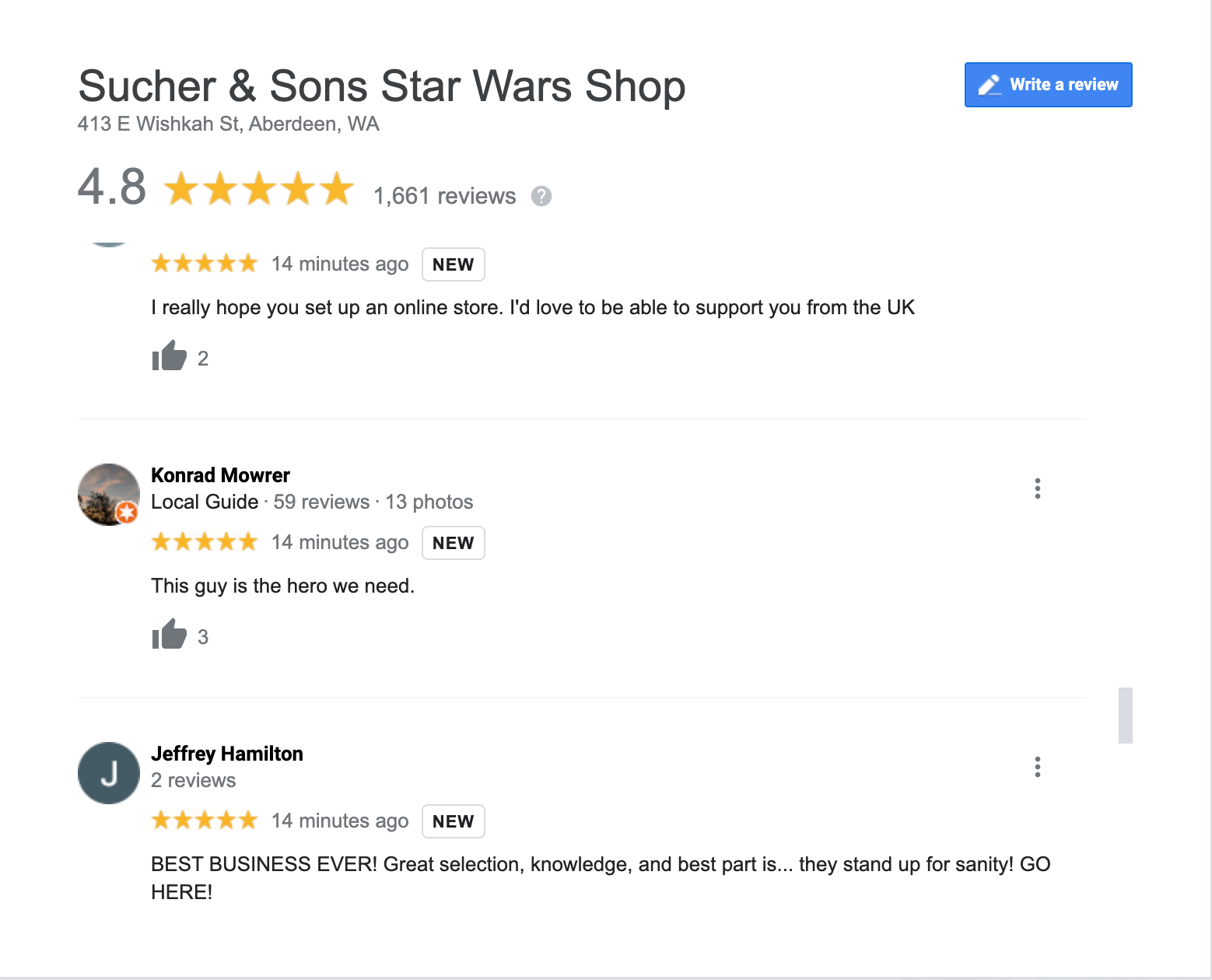 As of Friday morning, the store has 4.8/5 star reviews, though some reviewers expressed anger at Sucher and his political views.

“Shameful and embarrassing store owner,” a one star reviewer wrote Thursday. “He is filled with hatred, just like all the recent 5-star reviews on this page. The only thing that deserves a 5-star rating is the amount of cringe you hateful people bring. Disgusting.”

“Saved up $1000 to go spend here today,” another reviewer wrote Thursday evening. “Been saving for months. But they’re not getting a penny now. I’ve been just online shopping and probably found better deals, anyway. I understand the disagreement and that parts fine. But I would never, with a straight face, ask somebody if they had a male privates. I get he’s uncomfortable and so am I. But don’t ask ppl about their private parts, man. Cmon now. I won’t be associated with it.”