Team USA’s athletes wrapped up the 2020 Tokyo Olympic Games with a patriotic flourish of red, white and blue — proving, once again, that they missed the memo that the American flag was an offensive symbol.

The U.S. women’s volleyball team collapsed in a tangle of exhausted limbs and tears as they clinched one final victory and nabbed the gold for the first time ever. (RELATED: Bobby Finke Comes From Behind To Snag First Gold For The US In Men’s 1500m In 37 Years)

Coach Karch Kiraly couldn’t keep it together during his post-match interview. “Not only are they badasses, but they are now GOLD MEDALISTS!” he said.

“Not only are they badasses, but they are now GOLD MEDALISTS!”

The A-Team is America’s team.@AprilRossBeach and @AlixKlineman celebrate gold with the playing of the National Anthem. #TokyoOlympics x @TeamUSA pic.twitter.com/Cgo8cfMgvY

Hurdler Sydney McLaughlin, who set a new world record in the 400m hurdles at the Olympic trials, broke her own record to win gold in Tokyo.

“Let me start off by saying, what and honor it is to be able to represent not only my country, but also the kingdom of God,” McLaughlin captioned the photo of herself draped in an American flag. “Just because I may not win every race, or receive every one of my heart’s desires, does not mean God had failed. His will is PERFECT. And He has prepared me for a moment such as this. That I may use the gifts He has given me to point all the attention back to Him.”

McLaughlin was also part of the women’s 4x400m relay team, which included teammates Athing Mu, Dalilah Muhammad and Allyson Felix, that won her an 11th Olympic medal, making her the most decorated track and field athlete in history. 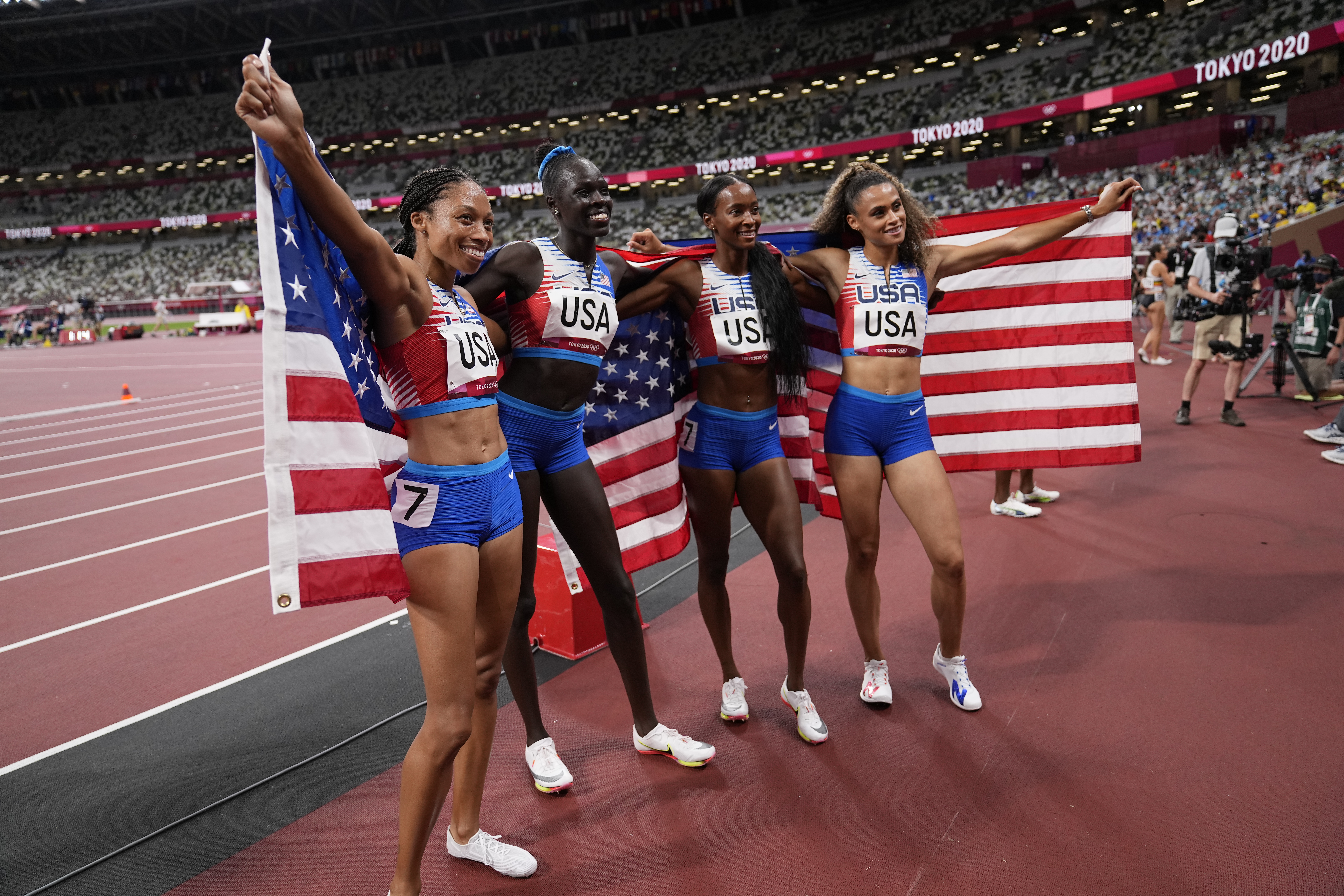 TOKYO, JAPAN – AUGUST 7: The team from the United States celebrates after winning the gold medal in the women’s 4 x 400-meter relay at the 2020 Summer Olympics, on August 7, 2021, in Tokyo, Japan. David J. Phillip-Pool/Getty Images 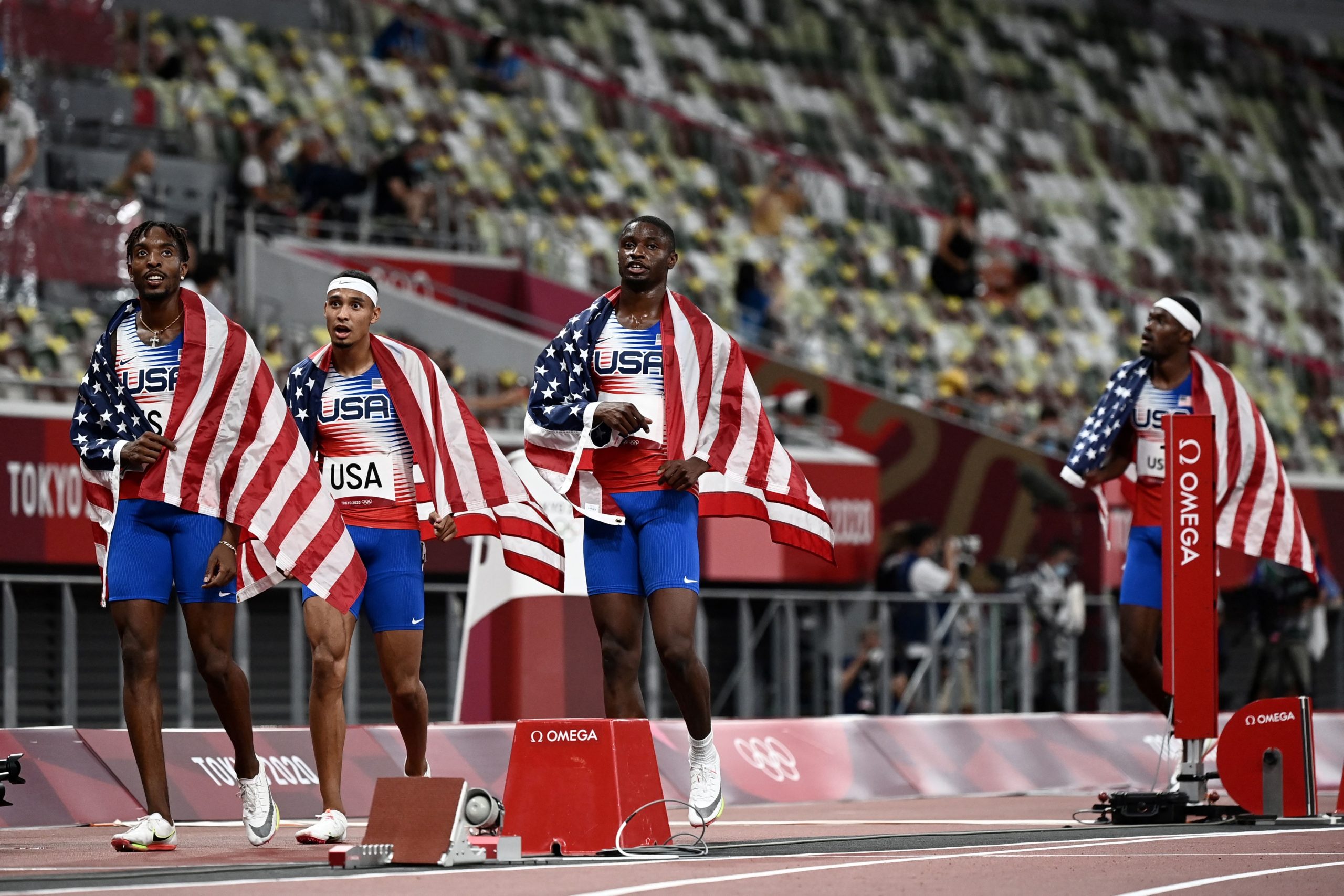 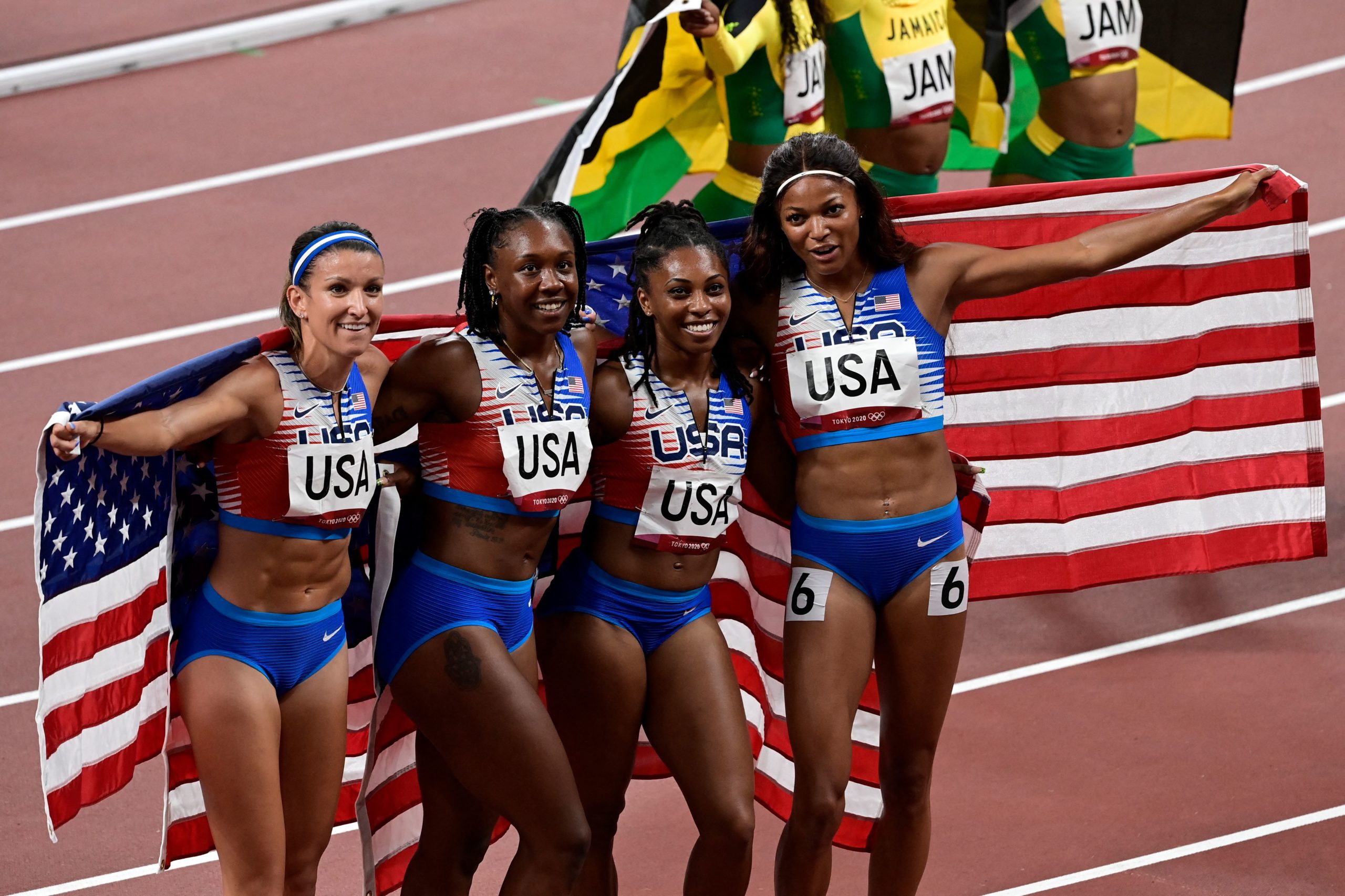 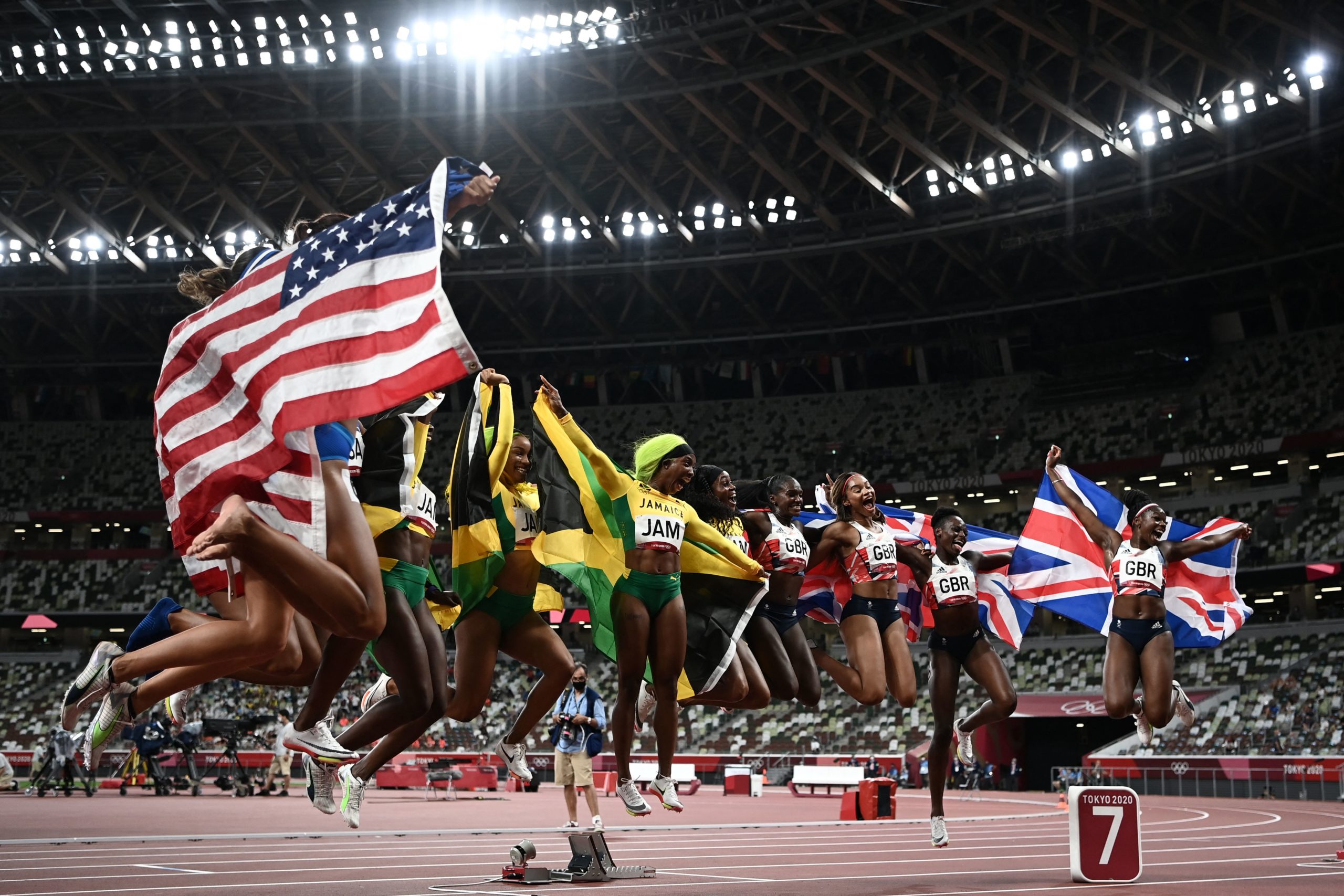 (L-R) Team USA, team Jamaica and Team GB celebrate after the women’s 4x100m relay final during the Tokyo 2020 Olympic Games at the Olympic Stadium in Tokyo on August 6, 2021. JEWEL SAMAD/AFP via Getty Images

Women’s water polo brought home another gold for the red, white and blue. 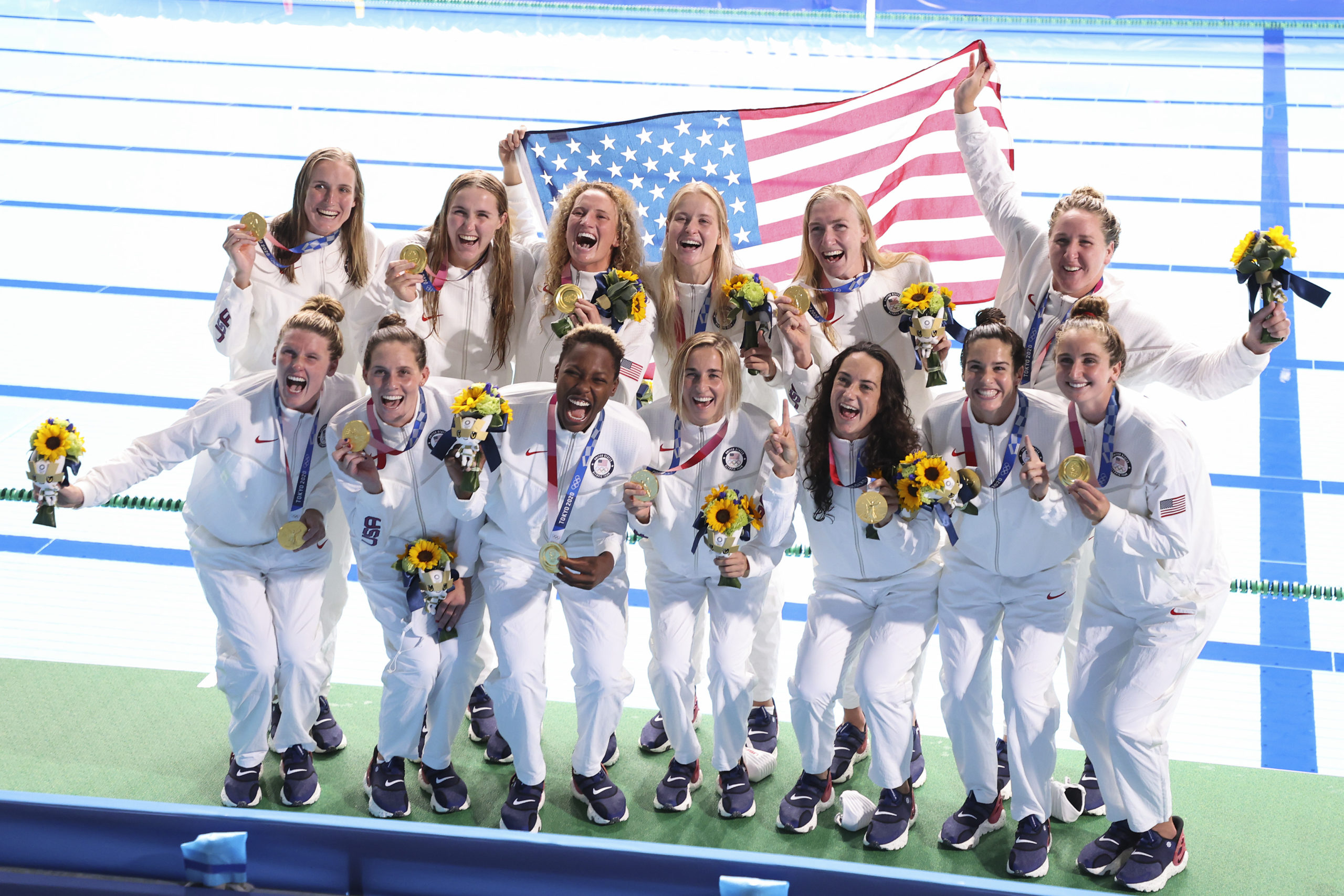 The women’s basketball team chalked up another gold — the seventh straight for Team USA. (RELATED: American Olympians Didn’t Get The NYT Memo That Flags Are Only For Trumpers)

The United States won its seventh straight gold medal in women’s basketball, beating Japan 90-75 at #Tokyo2020 . The Americans are on a 55-game Olympic winning streak dating back to the bronze medal game of the 1992 Barcelona Games. https://t.co/rjuE98Y1Dw 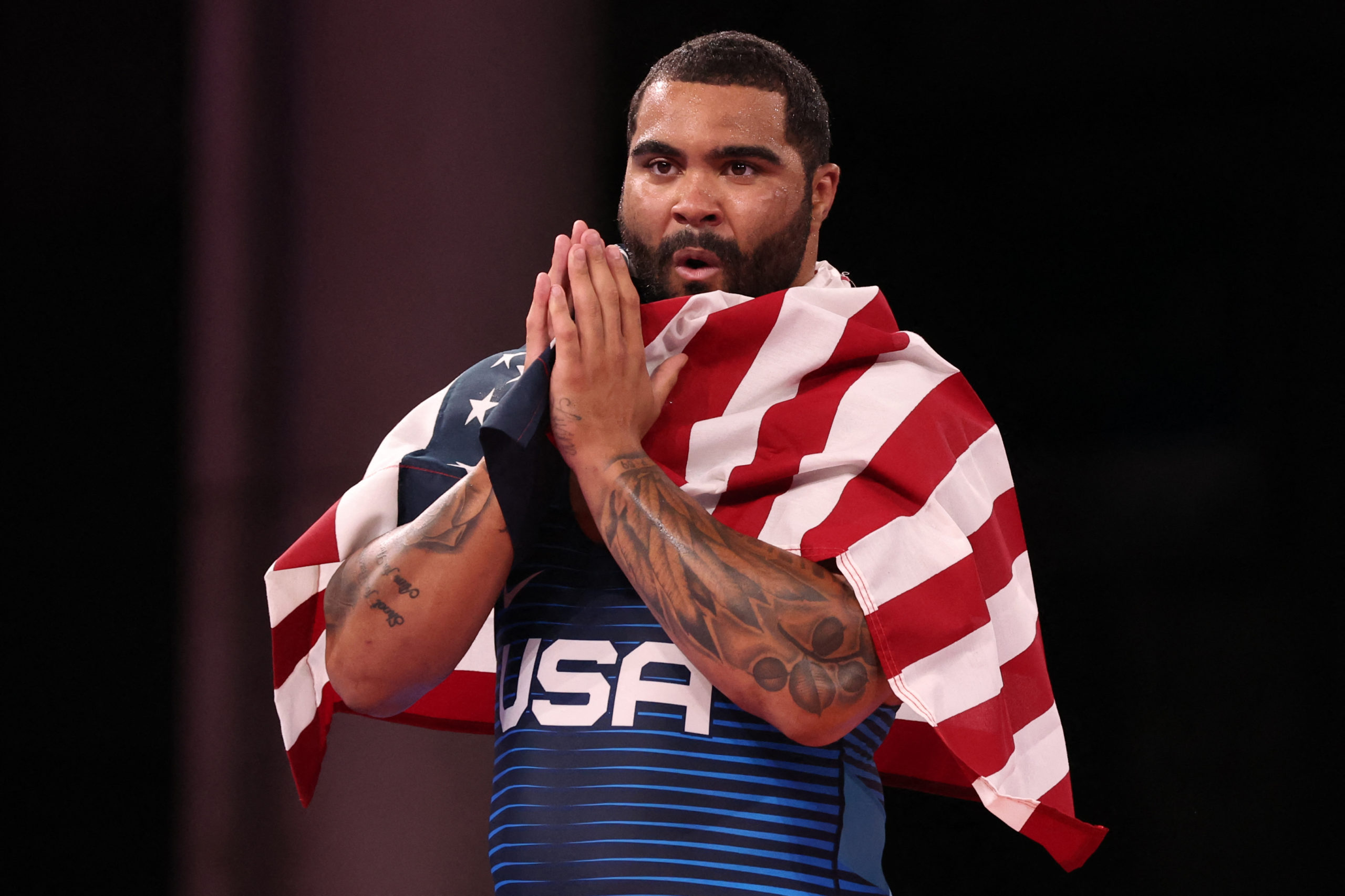 And no one could forget the contagious joy on display when Tamyra Mensah-Stock became the first woman to win wrestling gold for the U.S. “I love representing the U.S. I freakin love living there. I love it and I’m so happy I get to represent U.S.A!” she said, adding that she would try not to cry on the podium. “No promises!” she added.

“I love representing the US. I freakin love living there. I love it and I’m so happy I get to represent U.S.A!”
pic.twitter.com/xgmXGhJgic

After countless moments of glory, dozens of medals and memories to last a lifetime, @teamusa has one more thing to say:

Team USA finished the Tokyo Olympics with 113 overall medals to China’s 88, including 39 golds — the most of any country. pic.twitter.com/1Dl7Wdwbg6

The United States will finish the Olympics with the most gold medals of any team for the 3rd straight Summer games.

The United States will finish the Olympics with the most total medals for the 7th straight Summer games. pic.twitter.com/XToRVzla2C

The U.S. has finished at the top of the medal count for seven straight summer games.