Some officials have said China’s human rights abuses and mishandling of coronavirus merit a boycott of the 2022 Beijing Winter Olympics, but a full protest of the games could have political and financial repercussions, experts told the Daily Caller News Foundation.

Former Ambassador to the United Nations Nikki Haley called for a boycott in a Fox News op-ed citing China’s numerous human rights abuses, specifically the treatment of the Uyghurs, and argued that the U.S. attendance at the 2022 games would be a propaganda victory for the People’s Republic of China (PRC).

“I think that you have to think back to the 1936 Olympics in Berlin, it gave the Nazis a huge propaganda victory. But if today the Olympics were in Cuba and North Korea, we wouldn’t be participating,” Haley told the DCNF. (RELATED: EXCLUSIVE: Nikki Haley: Attending Beijing Olympics After Tokyo Would Give ‘Propaganda Victory’ To China)

Anyone who says we should participate in the 2022 Beijing Olympics is not remembering the atrocities that have happened in history.

Mitt Romney proposed the idea of either diplomatic or financial boycott in a New York Times op-ed, arguing that pulling diplomatic delegations and U.S. sponsorships would be more damaging than barring athletes, who spend considerable time training for the game.

A bipartisan group of senators wrote a letter to the International Olympic Committee (IOC) asking to delay the 2022 Games and relocate them to a different city.

The House Foreign Affairs Committee introduced a resolution asking the IOC to relocate games. The lawmakers have threatened to boycott the Olympics if the IOC disagrees. 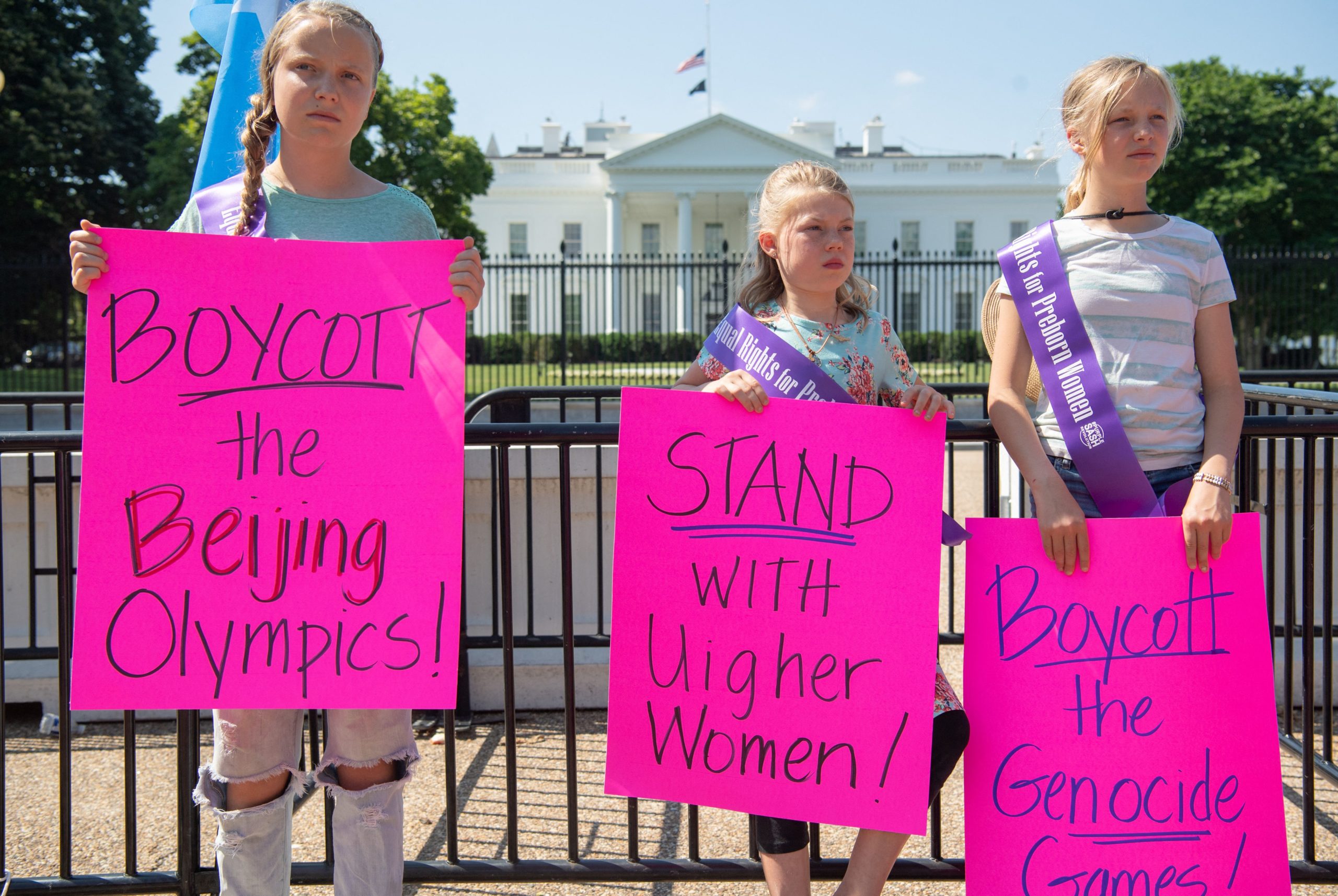 Young demonstrators with the group Stanton Public Policy Center’s Purple Sash Revolution hold a rally in support of Uighur women and call to boycott the 2022 Olympic Games in Beijing during a protest at Lafayette Park outside the White House in Washington, DC, May 27, 2021. (Photo by SAUL LOEB/AFP via Getty Images)

The calls of a boycott, specifically a diplomatic boycott, have grown considerably since former Secretary of State Mike Pompeo called the treatment of the Uyghurs a genocide in January. Still, the political and financial backlash from China could make the decision more difficult for the U.S. and other potentially protesting countries, sources told the DCNF.

Echoes Of The Cold War

The U.S. boycotted the 1980 Moscow Summer Olympics after the Soviet Union refused to pull its troops out of Afghanistan, according to the U.S. State Department archive.

Then-President Jimmy Carter threatened to pull the passports of any athlete who traveled to Moscow, according to the State Department.

The 1980 boycott had mixed results, and was seen at the time as punishing athletes rather than the Soviet Union, Andrew Bremberg, CEO of the Victims of Communism Memorial Foundation and former ambassador of the United States to the European Office of the United Nations in Geneva, told the DCNF.

Bremberg, whose foundation has not called for a boycott but asked the IOC to move the games, does not think a full protest is likely, but told the DCNF that he sees a diplomatic boycott as the most probable outcome.

“A diplomatic boycott would involve the U.S. pulling any diplomatic delegation from attending the 2022 games and convincing other countries to do the same while encouraging U.S. broadcasters to highlight the human rights abuses seen throughout China and telling advisers to clarify that they are sponsoring the Olympics, not the PRC,” Bremberg said.

Tim Carpenter, a senior fellow in defense and foreign studies at the Cato Institute, said he would not be surprised to see some form of a diplomatic boycott, but its “size and strength will be determined if other countries join and are willing to antagonize China.”

“There are some countries, particularly smaller ones, that do not want to antagonize Beijing by doing that. They don’t feel it’s worth it to do that,” Carpenter told the DCNF.

There have also been calls for a financial boycott, including pulling sponsors, advertisements and planned investments in China. This option is much more unlikely, as big corporations would not be willing to jeopardize their relationship with China, according to Carpenter. (RELATED: Biden Said He Would ‘Strongly Support’ The MLB Boycott Of Georgia, What Is He Going To Do About Beijing Olympics?)

“The retaliation could take a number of forms like refusing to buy U.S. debt, just literally suspending purchases, breaking off trade talks — and even take strategic forms in terms of increasing the pressure on Taiwan, creating more incidents in the South China Sea or the Senkaku Islands in the East China Sea,” Carpenter said.

U.S. corporations with a financial state in China have been hesitant to condemn the country’s human rights abuses and have instead focused on maximizing profits.

Disney, for example, filmed “Mulan” in Xinjiang, China, the region where the Uyghurs are imprisoned, but threatened to cut business ties with Georgia after it passed an anti-abortion law, the DCNF reported.

Nike CEO Joe Donahoe told CNBC on Thursday that the company plans to invest heavily in China in the future and emphasized the importance of the Chinese market.

“I find it difficult for any country to attempt a boycott of China in any way just given China’s position in the global market,” Conrad Wiacek, head of sports analysis at the consulting firm Global Data, told the DCNF.

Wiacek explained that China has a strong position in the global market, and countries in the Middle East, Africa, and South America are dependent on China for trade and foreign aid.

When comparing the potential 2022 boycott to the one in 1980, Wiacek points out that the world is much more globalized and interconnected than 40 years ago, and said there are more productive ways of exerting pressure on China.

A financial boycott also doesn’t make much sense for the large international companies, who rely heavily on the Chinese target market and the International Olympic Committee, especially ahead of the Games in Paris in 2024, Los Angeles in 2028, and Brisbane in 2032, Wiacek said.

“You need to think about the long game, what do the next 10 years look like rather than the next 18 months? Would the IOC welcome any of those brands back?” Wiacek said.

Sebastian Hughes contributed to this story.