A federal judge ruled Friday that the Biden administration could continue to enforce its new eviction moratorium, but cast doubt on its legality.

District of Columbia District Court Judge Dabney Friedrich ruled that the moratorium, which prohibits landlords from evicting low-income tenants who cannot afford their rent, could be enforced since a Supreme Court majority technically ruled it was constitutional. A Supreme Court majority had written that a previous version of the moratorium was legal, but that Congress would need to approve future moratoria.

“The Court’s hands are tied,” Friedrich wrote in her decision. “The Supreme Court did not issue a controlling opinion in this case, and circuit precedent provides that the votes of dissenting Justices may not be combined with that of a concurring Justice to create binding law.”

Justice Brett Kavanaugh, writing for a 5-4 majority, said in June that the eviction moratorium could stay in place. While he hinted the federal government couldn’t extend it by dictate, Friedrich said it was unclear which justices on the court agreed with his view and therefore she was unable to strike the moratorium down.

Friedrich’s ruling protects more than 12 million Americans who said they had little to no confidence in being able to make their next rent payment, according to a recent Census Bureau survey. (RELATED: ‘Almost Certainly Illegal’: Washington Post Editorial Board Slams Biden Eviction Moratorium)

“This motion was denied on technical, procedural grounds, but the court confirmed its opinion that the CDC is unlikely to succeed on the merits,” National Association of Realtors spokesperson Patrick Newton told the Daily Caller News Foundation following the ruling.

“We now plan to return in short order to the D.C. Circuit Court and then again to the Supreme Court if necessary,” he continued. “We are confident in our position that this unlawful eviction ban will soon come to an end.”

The White House said it was pleased by Friedrich’s ruling, but was aware future proceedings would be likely.

Last week, under the direction of President Joe Biden, the Centers for Disease Control and Prevention (CDC) extended the moratorium until Oct. 3 after it had expired on July 31. The new directive was tailored to apply only to regions with “substantial and high levels” of coronavirus transmission, or roughly 90% of all U.S. counties. 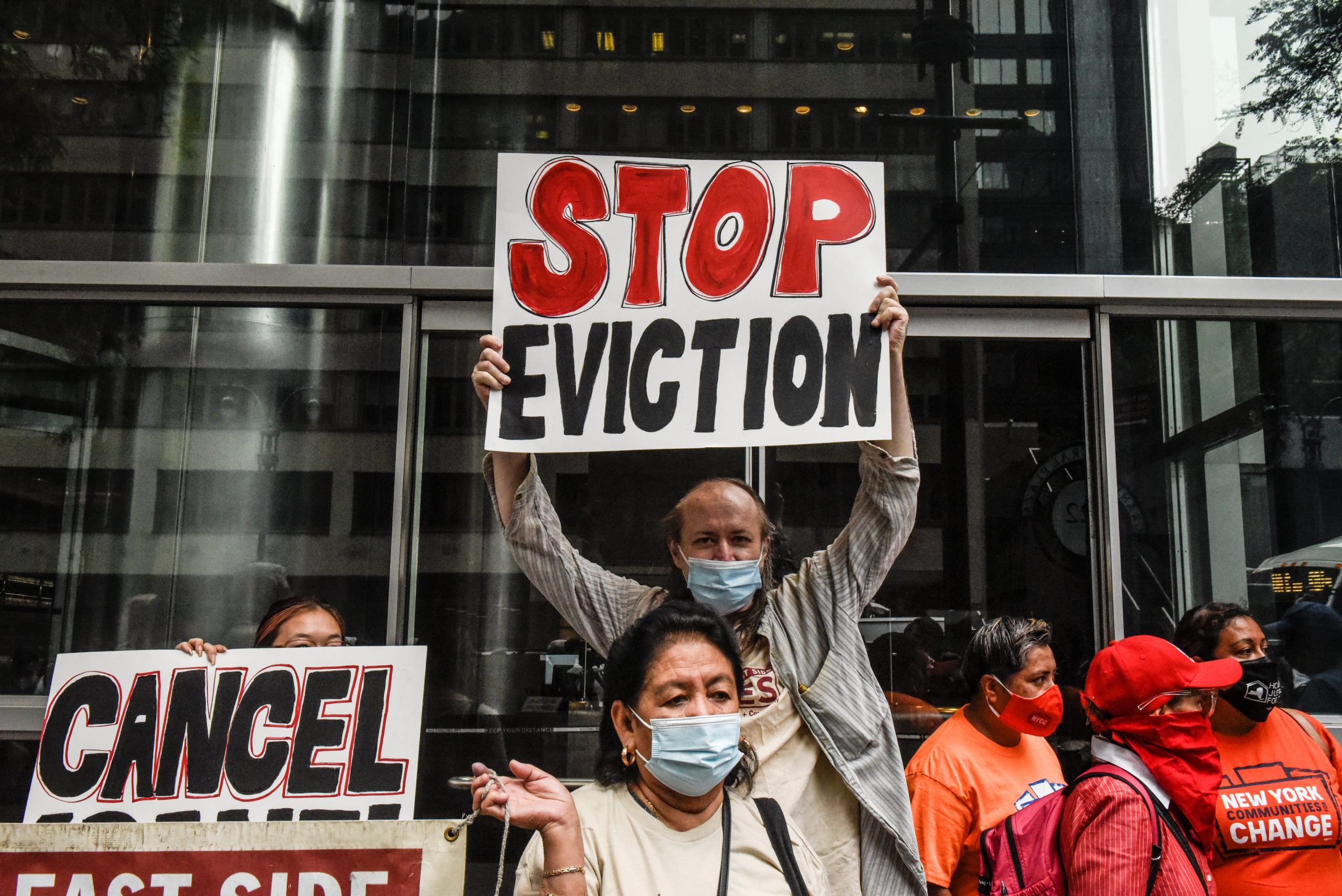 People participate in a protest for a new eviction moratorium on Aug. 4 in New York City. (Stephanie Keith/Getty Images)

The White House had originally asked Congress to renew the moratorium via legislation citing Kavanaugh’s brief. But the president ultimately succumbed to pressure from progressives who argued the suggested bill would never get Senate approval.

The Alabama and Georgia chapters of the NAR, which had sued the CDC over the moratorium, asked Friedrich to immediately halt the extension last week and pointed to Kavanaugh’s brief. The Biden administration argued Kavanaugh’s statement didn’t hold sway since it wasn’t an order or opinion, but that the court should instead reference an appeals court ruling upholding the original moratorium.

The landlord groups then responded, arguing that the White House itself had acknowledged the precariousness of the new moratorium. Biden told reporters that while he couldn’t guarantee the new moratorium would be upheld in court, he was confident the slow legal process would give Americans additional time to avoid eviction.

“It is startling that the government is openly acknowledging its manipulation of the judicial process for the purpose of delay,” the groups wrote in their Aug. 6 brief. (RELATED: ‘Not The Answer’: Landlords Slam Biden’s Eviction Moratorium Extension, Ask Federal Court To Intervene)

Landlords who rent property as a part-time, small operation have lost tens of thousands of dollars, according to multiple media reports. A New York City landlord, who rents rooms in her home, said tenants spit on and cursed at her and are delinquent on more than $23,000 in rental payments, The New York Times reported.

“Around half of all housing providers are mom-and-pop operations, and they also struggle,” Newton previously told the Daily Caller News Foundation. “Without rental income, they cannot pay their own bills or maintain their properties.”

The National Apartment Association filed a lawsuit to recover damages caused by the eviction moratorium over the course of the pandemic. The organization alleged that U.S. landlords are owed roughly $57 billion in unpaid rent due to the moratorium.

The eviction moratorium was first implemented by the Coronavirus Aid, Relief, and Economic Security Act in March 2020, providing relief for about 25% of the 43.8 million rental units in the U.S. The CDC extended the moratorium multiple times since September 2020 after the original expired.