Former Acting Director of National Intelligence Ric Grenell said President Joe Biden’s 90-day COVID origins investigation is an insult to the career intelligence officials who have been probing the virus’s origins for well over a year and will continue to do so as new information comes in.

“The 90-day review that Joe Biden has asked for is sadly because he hasn’t looked at the information in a while,” Grenell told the Daily Caller News Foundation. “It says more about his lack of daily interaction with briefers than anything else.”

“Every single day there are massive amounts of people on the China team, on the health team and on the State Department team who work in the IC who are watching for every little piece of information,” Grenell said. “If they get any movement, it’s immediately told in the president’s daily briefing. The president would be briefed on it.”

Biden ordered the 90-day review shortly after reports surfaced that he had shut down a State Department effort launched during the late stages of the Trump administration that had sought to prove the virus originated from a Wuhan lab.

“The intelligence community doesn’t hold back. They give information immediately. And they brief in real-time,” he added. “There is no need for a 90-day review.”

Grenell said the COVID origins investigation has been a priority for the intelligence community for over 15 months. He pointed to a statement issued by the Office of the Director of National Intelligence in late April 2020 saying that all 17 intelligence agencies had reached a consensus that COVID-19 broke out into the human population either through a Wuhan lab accident or via a natural spillover.

“If there was any update to that statement it would be briefed to the president and to the thousands of people who get the president’s daily briefing,” Grenell said.

He added that he has spoken to career intelligence officials who are simultaneously insulted and amused that Biden made a spectacle in May ordering them to do their job. 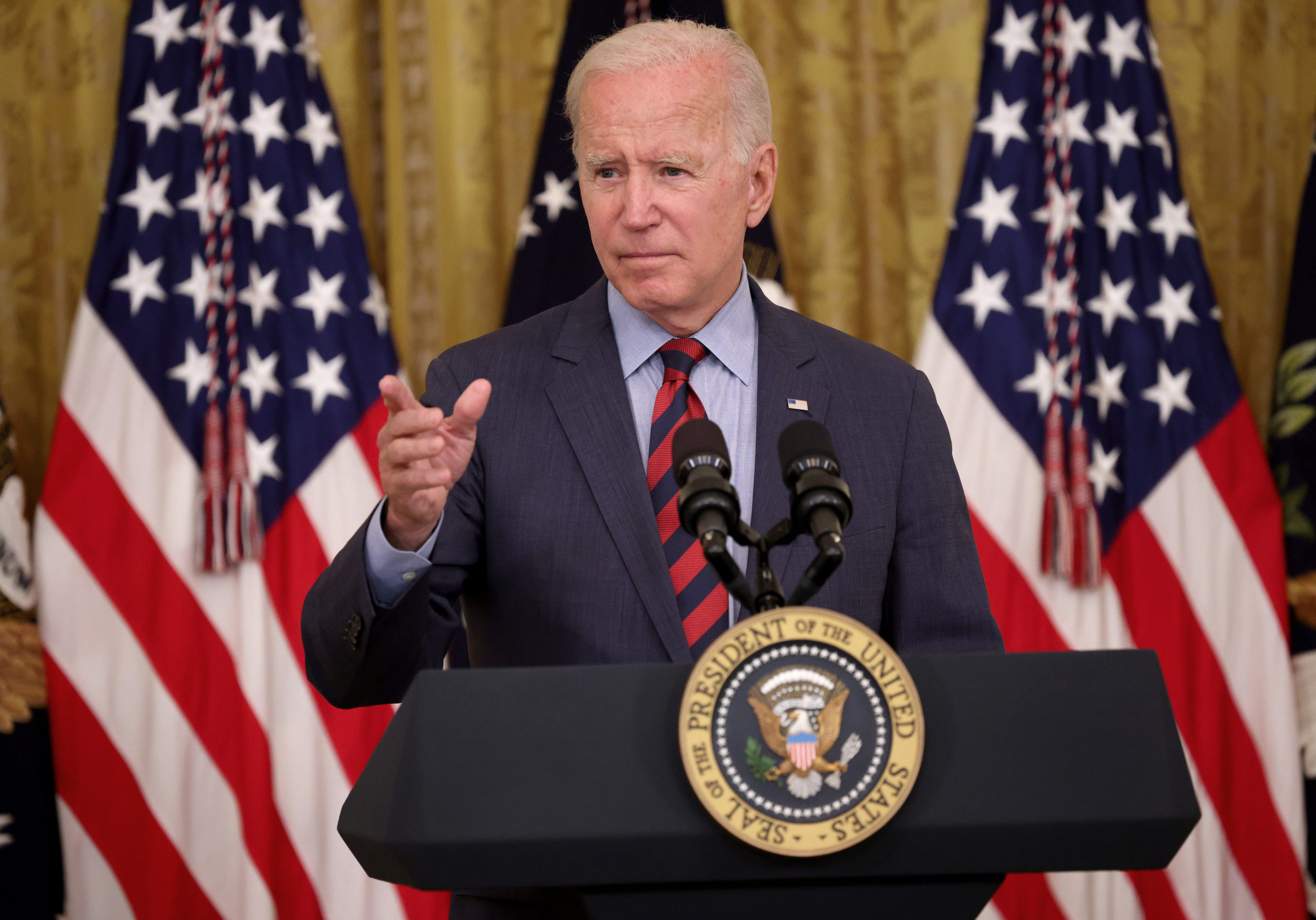 President Joe Biden takes questions during an event in the East Room of the White House where he addressed the importance of people getting a COVID-19 vaccination August 3, 2021, in Washington, DC. (Win McNamee/Getty Images)

“It’s not like they hold the information back,” Grenell said. “A review is silly because as soon as they look at the information it goes through the process. If it’s substantiated, then it gets put into the president’s daily briefing. So he would know immediately, not after 90 days.”

Grenell also took issue with a CNN report on Wednesday that quoted anonymous sources saying a report on the 90-day probe, which is expected to wrap up in late August, isn’t expected to offer any “earth shattering” revelations on the virus’s origins.

Sources told CNN that the intelligence community remains split on the two origin theories they had on the table back in April 2020, despite reports that intelligence agencies had recently obtained access to a trove of previously-hidden Wuhan Institute of Virology virus sample data. (RELATED: REPORT: US Intel Gains Access To ‘Treasure Trove’ Of Hidden Data On Wuhan Lab Viruses)

“The fact of the matter is, the intelligence community has been briefing for 90 days, every day, multiple times a day,” Grenell said. “They’re not holding anything for a report.”

Former State Department official David Asher, a vocal proponent of the lab leak theory who led the department’s probe into the origins of the virus during the Trump administration, said he was shocked the intelligence community remains split on the matter.

“I do see some massive deficiencies that appear obvious in this whole process,” Asher said.

“It’s sort of pathetic, frankly. If they can’t come up with clear answers with the resources they brought to bear, then, what the hell is really going on?” Asher said. “Is it really that hard to penetrate and collect evidence on basically a public laboratory that has hundreds of foreign contacts around the world including a massive relationship with EcoHealth Alliance in the United States?”

China has actively suppressed information since the earliest stages of the COVID-19 outbreak, efforts that have hampered the international community’s ability to discover the origins of the virus.

China first allowed outside investigators with the World Health Organization into the country to probe COVID’s origins in January, over a year after the initial outbreak. But the WHO’s investigation was mired in allegations of conflicts of interest and Chinese interference.

The WHO’s lead researcher on the COVID origins team, Dr. Peter Ben Embarek, revealed Thursday that investigators were pressured by Chinese authorities to not make any mention of the lab leak theory in its initial report.

Embarek said Chinese officials only agreed to allow the WHO to briefly mention in the report that the lab leak theory was “highly unlikely” on the condition they not recommend any further investigation into the hypothesis.

The Dutch scientist also said further investigation into the Wuhan Centers for Disease Control is warranted, noting that the lab, which was studying bat coronaviruses, moved in early December 2019, right around the time of the first known COVID-19 cases.

“It’s interesting that the lab relocated on the 2nd of December 2019: That’s the period where it all started,” Embarek said on Denmark state television TV 2, according to the Wall Street Journal. “We know that when you move a lab, it disturbs everything…That entire procedure is always a disruptive element in the daily work routine of a lab.”

Asher also said that China’s lead bat-based coronavirus researcher, Dr. Shi Zhengli of the Wuhan Institute of Virology, blatantly lied during a June interview with The New York Times when she said her experiments on bat viruses were conducted in Biosafety Level 2 labs, a safety level equivalent to that of a dentist’s office, because there was no evidence that bat viruses in China could directly infect humans.

Asher said he was shocked when first reading Shi’s claim in The Times, noting that she was the lead Wuhan Institute of Virology researcher that was called down to a Chinese mine in 2012 in which three miners died after contracting bat coronaviruses.

“She knew she was lying,” Asher said.

“It doesn’t appear to me that federal law enforcement is fully integrated,” Asher said of the intelligence community’s origins probe. “This should be a crime scene investigation. We have a crime. We have a clear motive for a coverup.”