President Joe Biden’s administration announced Friday that if school districts are unable to use state funding for defying Republican Florida Gov. Ron DeSantis’ mask ban mandate, they can use federal relief money instead.

U.S. Education Secretary Miguel Cardona highlighted the news in a letter to DeSantis and Florida Education Commissioner Richard Corcoran, according to Politico. Cardona chastised DeSantis, who previously issued an order banning mask mandates for schools and has threatened to withhold employee’s salaries.

“I am deeply concerned about Florida’s July 30 Executive Order prohibiting school districts from adopting universal masking policies consistent with CDC guidance,” Cardona wrote in the letter. “Moreover, on August 9, the Governor’s spokesperson released a statement specifying that in cases where school districts adopt masking policies consistent with CDC guidance, ‘the State Board of Education could move to withhold the salary of the district superintendent or school board members.’ The Governor’s Office appeared to further clarify that penalties could take the forms of fines on a school district.”

“As mentioned in my call to Commissioner Corcoran on August 4, we are eager to partner with FL DOE [Florida Department of Education] on any efforts to further our shared goals of protecting the health and safety of students and educator,” the letter continued. “If FL DOE does not wish to pursue such an approach, the Department will continue to work directly with the school districts and educators that serve Florida’s students.” 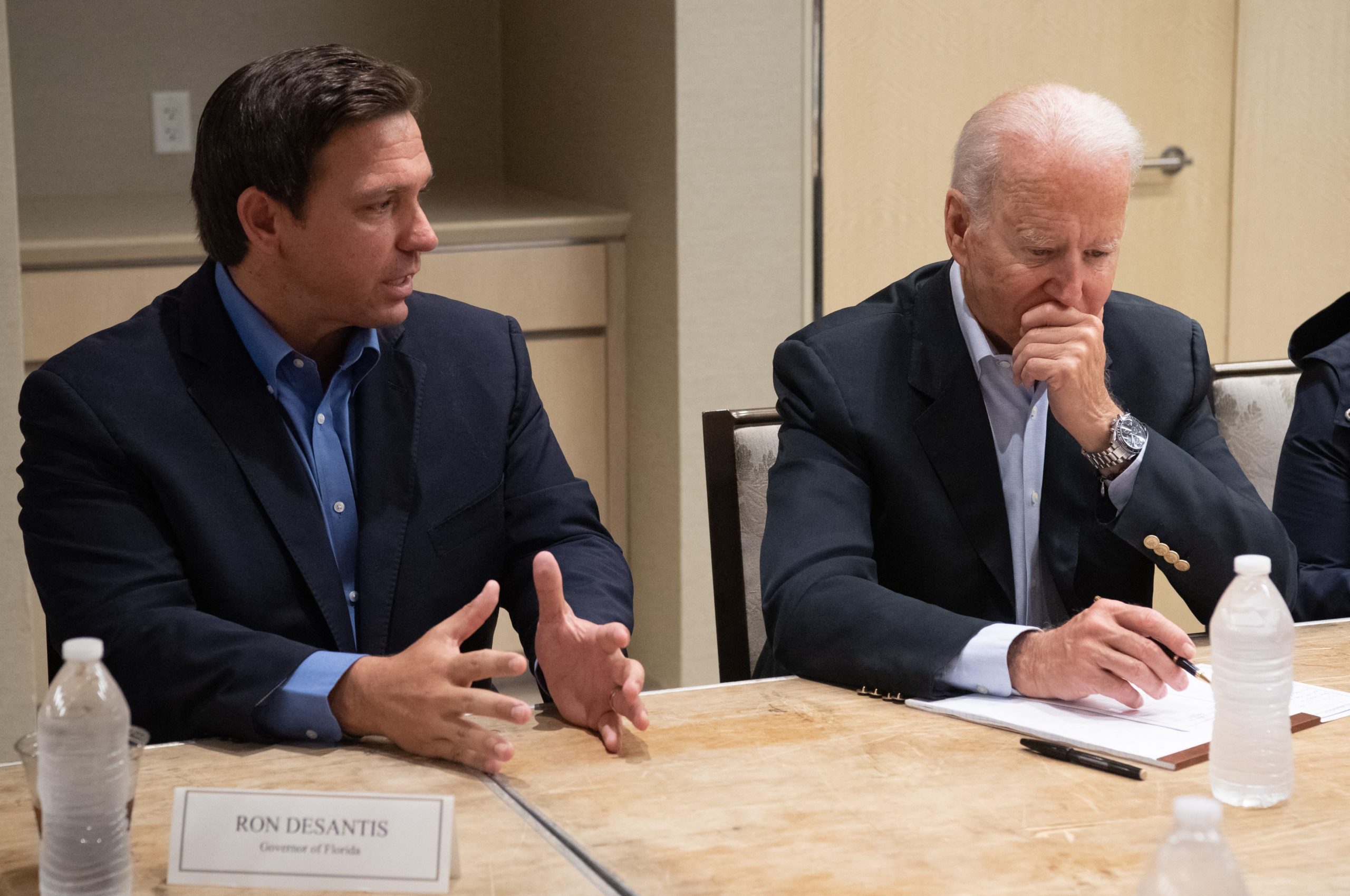 US President Joe Biden alongside Florida Governor Ron DeSantis (L) speaks about the collapse of the 12-story Champlain Towers South condo building in Surfside, during a briefing in Miami Beach, Florida, July 1, 2021. (Photo by SAUL LOEB/AFP via Getty Images)

Christina Pushaw, a spokeswoman for DeSantis, condemned the Biden administration for trying to spend money on employees “who don’t believe that parents have a right to choose what’s best for their children.” Pushaw suggested the funds “should be used” on “Florida’s students,” Politico reported.

The White House has repeatedly addressed the fight between DeSantis and school boards across Florida. White House press secretary Jen Psaki – and Biden himself shortly afterwards – told reporters earlier in August that governor’s such as DeSantis should “get out of the way” of the administration’s efforts at combating the coronavirus.

“The people are trying to do the right thing. Use your power to save lives,” Psaki pleaded. (RELATED: ‘Governor Who? That’s My Response’: Biden Laughs Off Question About Ron DeSantis, COVID-19 Restrictions)

DeSantis responded by telling Biden to “do your job” and declaring that until the border is secure, he doesn’t “wanna hear a blip about COVID from” Biden. The issue has sparked reports of a back-and-forth “war” with DeSantis and the White House, although the latter pushed back on that characterization during the August 11 press briefing.

“Our war is not on DeSantis, it’s on the virus, which we’re trying to kneecap. And he does not seem to want to participate in that effort to kneecap the virus, hence our concern,” the press secretary said.