According to a Fox News Media memo, the network said it “evacuated three former freelance associates, as well as an Afghan colleague from a regional media company,” and their families. 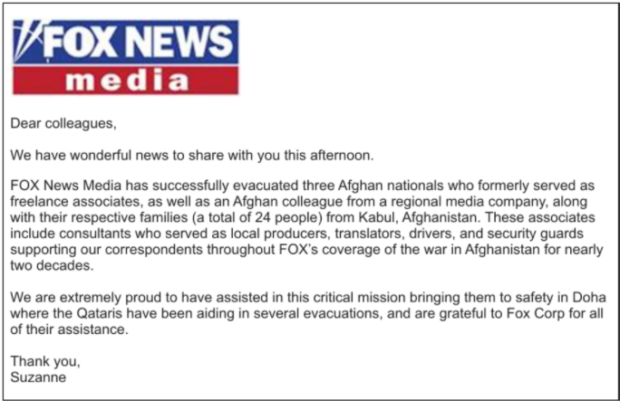 “These associates include consultants who served as local producers, translators, drivers, and security guards supporting our correspondents throughout FOX’s coverage of the war in Afghanistan for nearly two decades,” Fox News Media chief executive Suzanne Scott wrote in the memo.

Scott said the network is “extremely proud to have assisted in this critical mission bringing them home to safety in Doha where the Qataris have been aiding in several evacuations, and are grateful to Fox Corp for all of their assistance.” (RELATED: Troops Deliver Afghan Baby On Board Evacuation Flight)

The White House announced Sunday that approximately 30,000 people have been evacuated since the end of July.

President Joe Biden told ABC News’ George Stephanopoulos the U.S. is looking to evacuate between 50,000 and 65,000 Afghans. “The commitment holds to get everyone out that, in fact, we can get out and everyone that should come out. And that’s the objective. That’s what we’re doing now, that’s the path we’re on. And I think we’ll get there,” Biden said.