Meghan McCain ripped Vice for suggesting that many U.S. Marines are neo-Nazis following the death of at least 11 Marines in explosions in Kabul, Afghanistan.

“Go fuck yourselves,” the former co-host of “The View” tweeted Thursday to her hundreds of thousands of followers. (RELATED: Taliban Fighters Enter Kabul After Afghan President Flees)

McCain’s tweet included a retweet of a post from Vice that read, “While many vets are being outed as far-right extremists, one branch keeps popping up when it comes to neo-Nazis: The United States Marine Corps.” It included a link to a Vice article under the headline, “Why Are So Many Marines Neo-Nazis?” (RELATED: ‘Dragged’: Meghan McCain Blasts ‘Every Single Person In Biden Administration’ Over Fall Of Kabul)

The outlet has since deleted the tweet, but was screenshotted and can be viewed below. 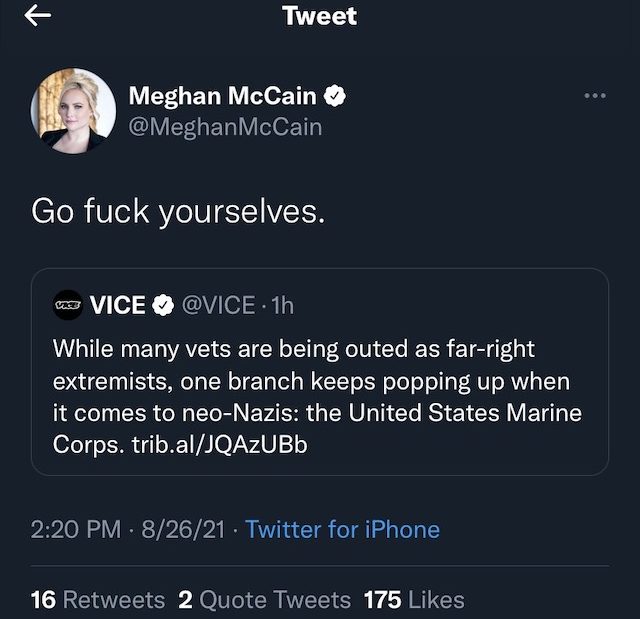 Earlier on Thursday, suicide bombers in the city set off explosions at the Hamid Karzai International Airport and at a nearby hotel, Pentagon official Gen. Kenneth McKenzie told reporters. (RELATED: Conservative Political Commentators Blame Biden Admin For ‘Travesty’ After Explosion In Kabul)

President Joe Biden’s deadline of Aug. 31 looms for the U.S. to withdraw from the country and evacuate American citizens.