Arizona Attorney General Mark Brnovich slammed the Biden administration’s “radical agenda” after it threatened to take action over the Arizona ban on mask mandates in schools.

Brnovich said Arizona is prepared to defend itself from any federal overreach that interferes with the state’s sovereignty, in a letter to Education Secretary Miguel Cardona obtained by the Daily Caller News Foundation. The attorney general warned that the state would take the Biden administration to court if it infringed upon the state’s constitutional rights.

“My office will not tolerate any effort from the federal government to undermine or interfere with Arizona’s sovereignty,” Brnovich wrote. “We stand ready to defend against any overreach.” (RELATED: Biden Administration Opens Civil Rights Investigations Into States Banning School Mask Mandates)

On Tuesday, the Department of Education opened civil rights investigations into five states — Iowa, Oklahoma, South Carolina, Tennessee and Utah — that banned mask mandates in schools. The agency noted that it didn’t open probes into other states with bans in place before courts blocked them, but said it would “continue to closely monitor those states and is prepared to take action.”

President Joe Biden ordered the Department of Education to assess its options one week before Cardona announced the investigations. The president accused elected officials of turning mask mandates into “political disputes for their own political gain” in a speech on Aug. 18. 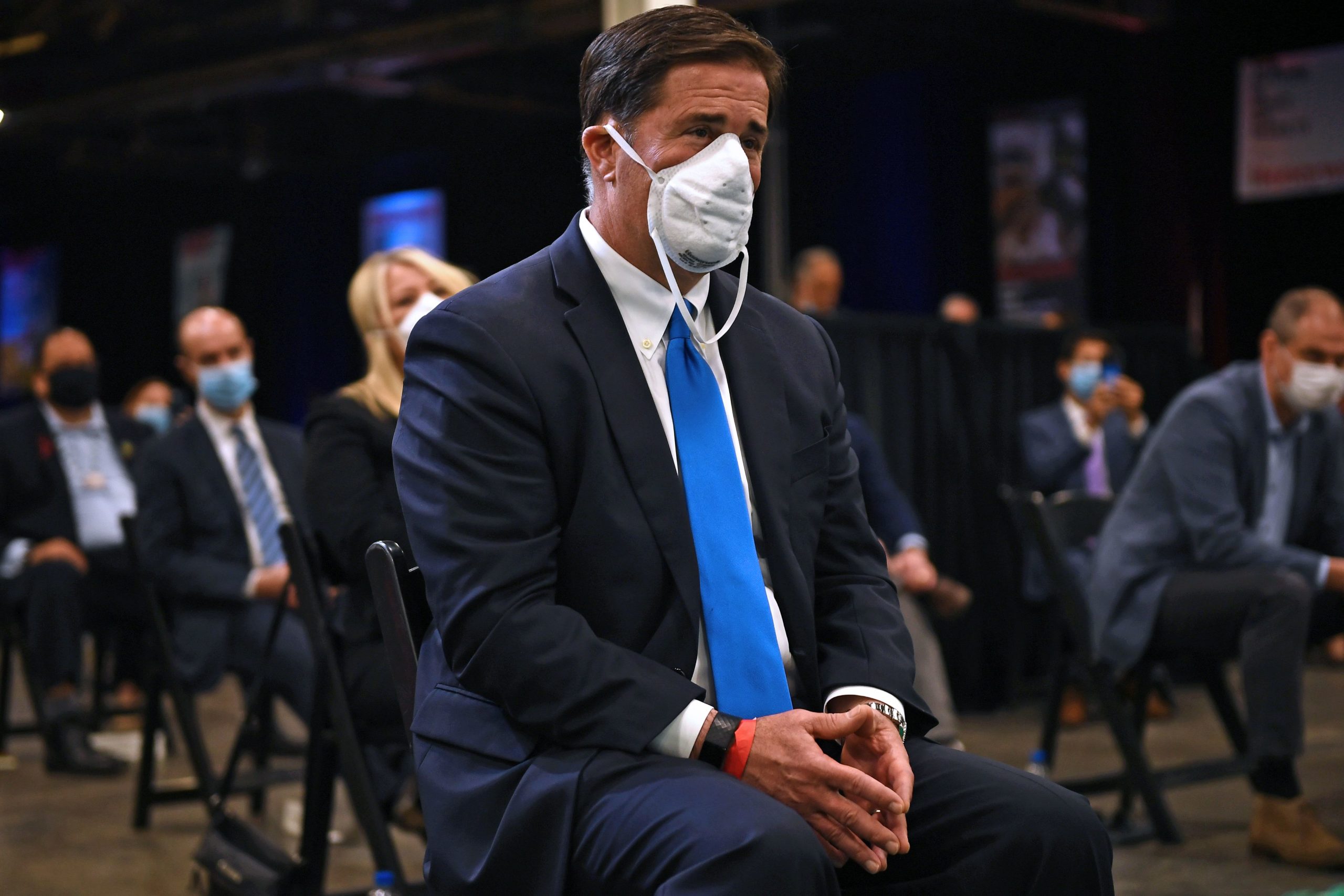 Arizona Gov. Doug Ducey wears a mask as he listens to former President Donald Trump speak in May 2020. (Brendan Smialowski/AFP via Getty Images)

Arizona Gov. Doug Ducey vowed in July to prohibit mask mandates in schools, arguing that Centers for Disease Control and Prevention recommendations was misguided. He argued that vaccinations were the most effective way to combat the pandemic, not masks.

“The CDC today is recommending that we wear masks in school and indoors, regardless of our vaccination status,” Ducey said in a statement. “This is just another example of the Biden-Harris administration’s inability to effectively confront the COVID-19 pandemic.”

However, an Arizona state court judge ruled in favor of a Phoenix school district that implemented a mask mandate for all students last month, the Arizona Republic reported. The judge didn’t dismiss the case, and Brnovich wrote to Cardona, “our office looks forward to defending the State of Arizona … against a blatantly political attempt” to undermine it.

“The past 18 months have given countless Americans a greater appreciation of our Founding Fathers and the structure they chose to balance power within our constitutional republic,” Brnovich wrote to Cardona. “They understood the wisdom of instituting a horizontal balance of power between the three branches of government, while also guarding the vertical balance of power between the federal and state governments.”

“It is true that over many generations, this crucial balance has been tested as the federal government has grown beyond its original intent,” he continued.