Afghan refugees are subject to security and health screening performed by Department of Homeland Security officials before they’re evacuated to the U.S. or a third country for additional processing, a Biden administration senior official said.

Afghans must clear biometric and biographic vetting including iris scans, palm and voice prints and photographs before they’re evacuated from the country, CNN reported. The refugees are also tested for COVID-19 and offered vaccinations before they’re released, the senior official said in a background press call on Aug. 24.

“That [security screening] process involves biometric and biographic security screenings conducted by our intelligence, law enforcement, and counterterrorism professionals who are working quite literally around the clock to vet all of these Afghans before they’re allowed into the United States,” the Biden administration senior official said on the call. 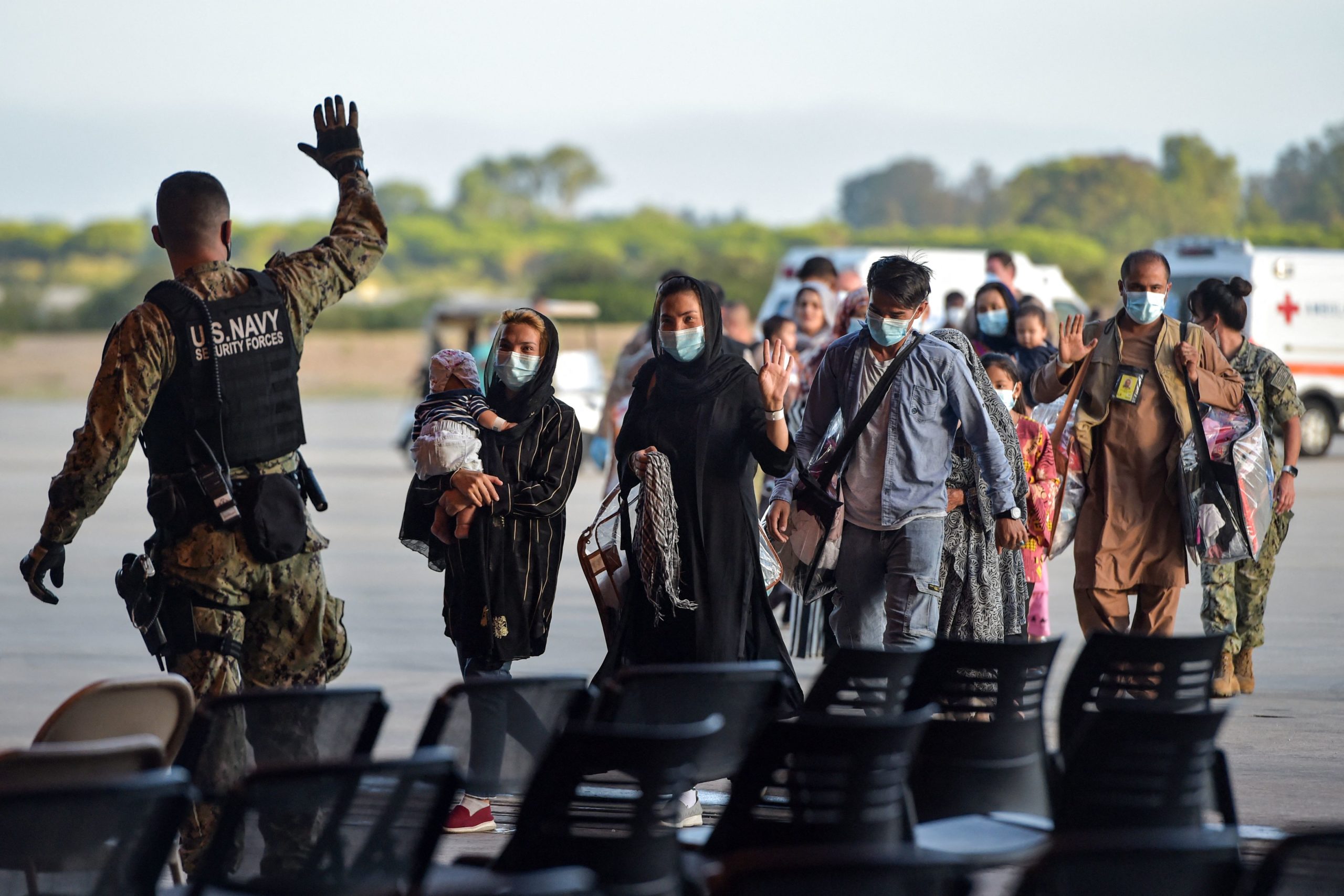 Refugees receive instructions from a US navy soldier as they disembark from a US air force aircraft after an evacuation flight from Kabul at the Rota naval base in Rota, southern Spain, on August 31, 2021. (Photo by CRISTINA QUICLER/AFP via Getty Images)

The DHS screens refugees before they’re allowed to travel to the U.S. where officials will assist them with their immigration proceedings or match them with nonprofits that help with resettlement efforts, according to the senior official.

“There are not security vulnerabilities; what there are are bureaucratic inefficiencies in the security process—which mostly have to do with interagency coordination and which databases are used—that has slowed the process down to a crawl at various points in the last decade,” Human Rights First President and CEO Michael Breen said during a press call, Bloomberg Government reported.

Afghans may come to the U.S. on visas, as visa applicants, as legal permanent residents or under humanitarian parole as vulnerable individuals who haven’t applied for a visa, Bloomberg Government reported.

The Afghan Special Immigrant Visa (SIV) program started in 2009, though the Taliban’s seizure of the country has led to tens of thousands of allies seeking refuge in the U.S. through the program, Reuters reported. (RELATED: At Least 30 Afghan Children Have Come To The US Alone)

“Everyone is being vetted at some point, at least once or twice,” a Biden administration official told CNN. Afghans are vetted before they’re allowed to work with U.S. officials and again before they’re issued visas to travel to America.

State Department spokesman Ned Price said, “when it comes to SIVs, again, all of those who have received instructions to come to the airport have already completed certain stages of the security vetting process,” during a press briefing on Wednesday. “So that initial vet on these individuals has been completed. In many cases, they’re then taken to a third country, where they will undergo more rigorous vetting if it hasn’t yet been completed.”

The State Department allocated an additional 8,000 SIVs for Afghan allies on July 30, according to the agency. SIVs are available to Afghans who worked with or for the U.S. government or for an international organization that worked with U.S. officials as translators for at least one year from Oct. 7, 2001, and Dec. 31, 2023.

“Applicants must also have experienced or be experiencing an ongoing serious threat as a consequence of their employment,” according to the State Department. Applicants are also required to submit a letter of recommendation from a senior supervisor and may bring their spouses and any unmarried children younger than 21 if they’re granted an SIV and allowed to come to the U.S.

Vulnerable Afghans who don’t qualify for the SIV program can apply for refugee status in the U.S., CNN reported.

The Biden administration planned to evacuate between 50,000 and 65,000 Afghan refugees to the U.S. as American forces withdrew from the country and hasn’t disclosed how many refugees were evacuated or what their immigration status is, according to Reuters.

At least 20,000 Afghan refugees were staying at eight military bases in the U.S. as of Wednesday, Chairman of the Joint Chiefs of Staff Gen. Mark Milley said. More than 120,000 people have been evacuated from the country and an unknown number of Afghans and Americans were left behind, White House Press Secretary Jen Psaki said during a Monday press conference.

The DHS did not respond to the Daily Caller News Foundation’s request for comment.