It’s a common practice for firearm manufacturers to create an item with mass appeal first, and then follow up with line extensions. Such is the case with SIG Sauer’s wildly successful Tread series, which debuted in 2018. And while 5.56 NATO-chambered AR-15-type firearms have the broadest appeal, there’s a segment of the AR community that desires—or needs—the upscaled performance delivered by the larger 7.62 NATO round. As such, for 2020, the company added the .30-cal. 716i to the Tread lineup.

Like its .223-cal. counterparts, the 716i is a semi-automatic rifle that operates using direct gas impingement. Paired with the carbine-length gas system is an H2 buffer. The combination results in reliable functioning, minimal muzzle rise and tolerable recoil.

Immediately catching the eye are cutouts in the 716i’s bolt carrier. Circumventing the rear are six, evenly spaced recesses measuring 1″ by 1/4″. Not only will these nooks reduce weight, but they could capture debris, too.

Larger cutouts are found on the front right and the front left. The latter is 3″ in length and 7/16″ wide, saving meaningful weight. Still, according to an AWS Postal Scale, the BCG weighs right at one pound, and it’s a major contributor to the carbine’s 8-lb., 2-oz. overall weight. Other features of the carrier group include a staked bolt key, eight-lug bolt (with an M16-style extractor) and dual, plunger-type ejectors. The latter launched spent cases well to the right and rear of the shooter in a relatively small radius, making cleanup of the valuable brass fast and easy. 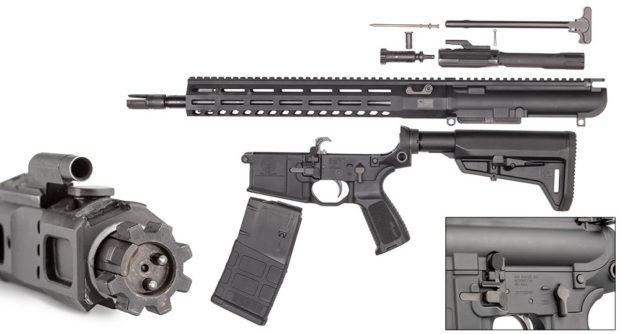 During testing, the direct-impingement SIG 716i Tread’s dual, plunger-type ejectors (l.) launched empty cases into a nice, neat little pile to the right and rear of the shooter. Bilateral controls include (r.) 90-degree safety levers and magazine-release buttons.

Chambered in 7.62 NATO (.308 Win.), the 716i features a compact, 16″ ferritic nitrocarburizing (FNC) steel barrel with 1:10″-twist rifling. This twist rate will adequately stabilize all but the very heaviest, most streamlined bullets. As for the barrel’s abbreviated length, while a boon for maneuverability and portability, shooters should expect velocities to fall short of published numbers, which are typically generated with 24″ barrels. The hearty tube’s muzzle is threaded in the common 5/8×24 TPI pattern, and it ends with a three-prong flash hider.

There are several other noteworthy features of the aluminum alloy upper receiver. First, there’s the practical ejection port cover, shell deflector and forward assist—essentials for self-defense and hunting. Affixed to the front of the receiver is a 15″ free-floating handguard, also crafted from aluminum. Since the 716i is devoid of sights, the 22½” of uninterrupted Picatinny rail atop the upper provides space for attaching an optic. The CNC-machined handguard has cutouts to facilitate cooling and improve aesthetics, as well as five sets of seven M-Lok mounting points for adding accessories.

Like the upper receiver, the lower is made from aluminum, and there is minimal play between the sections thanks to a rubber tensioning insert and quality machining. The magazine well is beveled to facilitate faster changes of the AR-10-style magazines; one black Magpul PMAG 20 LR/SR Gen M3 magazine accompanies the rifle. There are bilateral attachment points on the lower for a single-point sling.

To the rear of the lower is a polymer pistol grip with ribs on the frontstrap and backstrap to increase purchase. This is enhanced by aggressive texturing on the sides. At the bottom there’s a removable cap, which grants access to storage space for spare batteries, ammunition, tools, etc. In an effort to cater to all shooters, the 716i’s fire controls include bilateral magazine-release buttons and two-position safeties, however, there is only a left-side bolt catch.

The carbine has a polished, hard-coated, single-stage trigger. According to a Lyman Digital Trigger Pull Gauge, the test rifle’s trigger broke at an average of 6 lbs., 2 ozs. Despite its relatively heavy pull weight, creep and overtravel were virtually nonexistent, and the reset was quite short.

Rounding out the 716i’s attributes is a six-position, telescoping Magpul SL-K buttstock. In its extended position, the overall length of the rifle is 37 1/2″, and the length of pull is 14 7⁄8″. When collapsed, those numbers are 34 3⁄8″ and 11 3/4, respectively. Given that range, the carbine can fit most shooters, even with changes in apparel and/or protective gear. 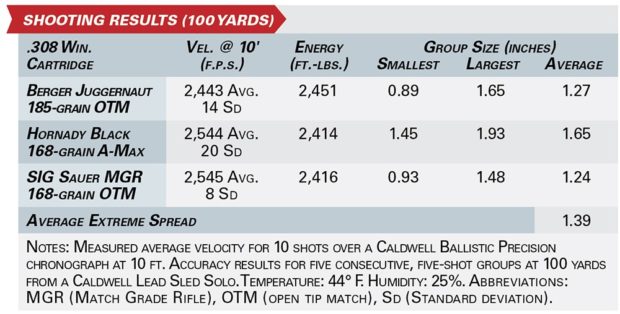 To test the 716i, we topped our sample with a Leupold VX-3i 4.5-14X 40 mm scope and assembled a variety of .308 Win. loads to evaluate accuracy and proper functioning. The rifle fared very well: SIG’s 168-grain open-tip match load grouped best, producing a five-shot, five-group average of 1.24″ at 100 yards, contributing to an excellent three-load average extreme spread of only 1.39″. Still, there’s little doubt to the evaluators that accuracy could be further improved through a lighter trigger pull and/or experimentation with a range of bullet weights and types. During all testing, there were no failures to feed, fire, extract or eject.

In the process of firing nearly 200 rounds, recoil wasn’t an issue, and that’s not due to the hard rubber pad on the buttstock; instead, it’s the result of a well-balanced operating system and the gun’s heft, which is its foremost complaint in reviews by actual owners. In actuality, a lightweight .308 Win. quickly becomes unpleasant to shoot, and we think SIG got it just right. Given its impressive performance relative to its reasonable price, those shooters interested in stepping up to an AR-10 will find the SIG Sauer 716i Tread to be a top choice for doing so.