California gubernatorial candidate Larry Elder’s campaign hit back at the Los Angeles Times on Friday, accusing the publication of using a photo to suggest he was hitting a supporter.

A white woman in a gorilla mask threw an egg at Elder’s head Wednesday in an attack that he says would have been called a hate crime if he were a Democrat and not a Republican. The attack quickly circulated on social media and was widely reported. (RELATED: ANALYSIS: Will Larry Elder Be California’s Governor? Not If Hollywood Can Help It)

The LA Times headlined its report on the incident “LAPD is investigating altercation involving Larry Elder at Venice homeless encampment” accompanied by a photo showing Elder with his hand apparently on the face of a woman.

Want to know how evil the U.S. mainstream media is? Read this. pic.twitter.com/t6PnQeo5Sw

The publication has since updated the story’s photo to a picture showing Elder, shielded by several people, walking away from the woman in the gorilla mask. (RELATED: ‘A Very Angry, Ugly Scene’: Larry Elder Says If He Was A Democrat, Egg Attack Would Have Been Called A Hate Crime)

The original headline and photograph combination suggests Elder was an instigator in the altercation mentioned in the story’s headline, Elder’s campaign told the Daily Caller News Foundation.

“This is completely absurd,” communications director Ying Ma told the DCNF. “Larry went to give a supporter a hug and the LAT used a photo taken at an angle that made it appear as if he was hitting her.” 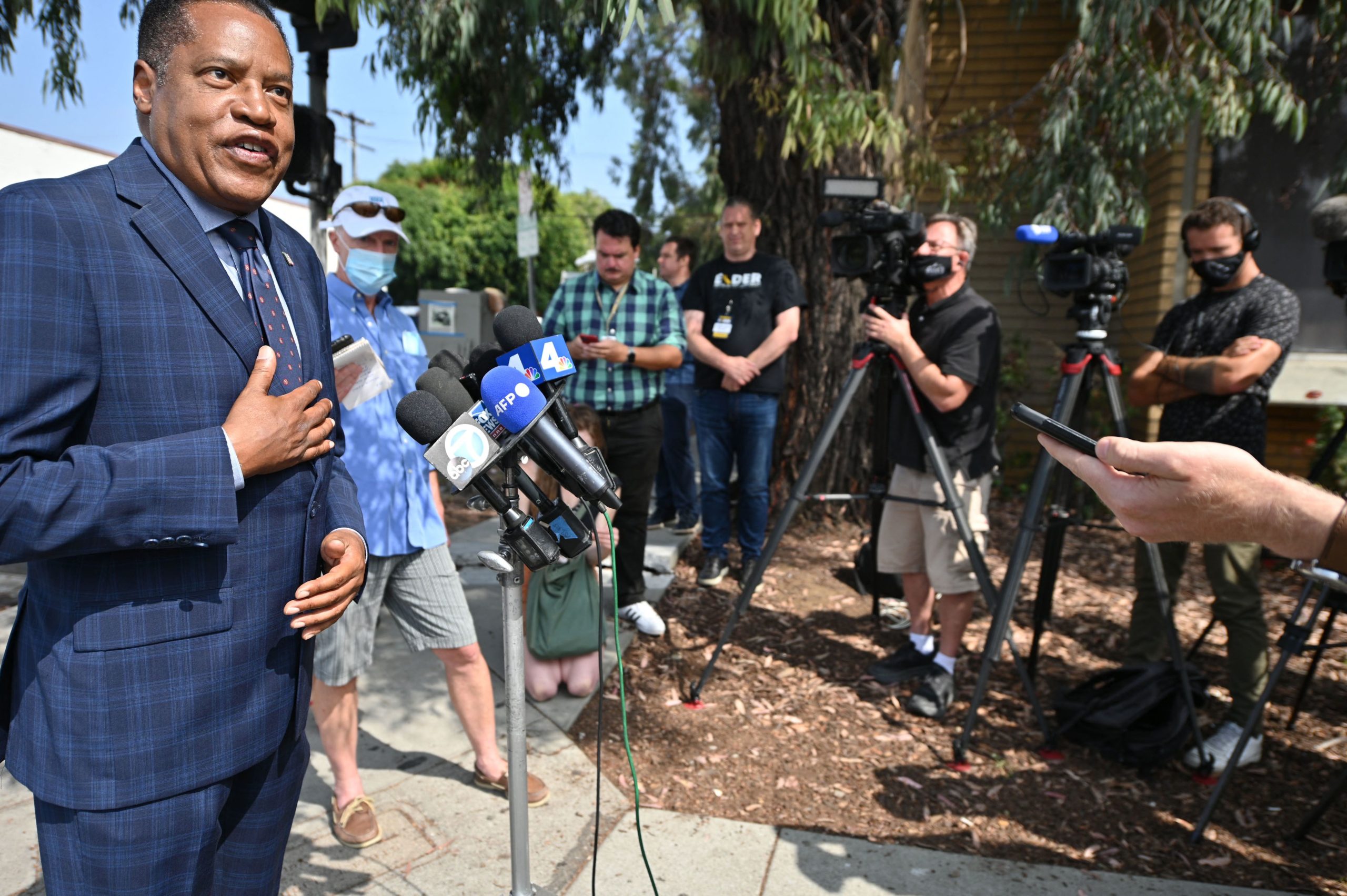 Conservative talk show host and gubernatorial recall candidate Larry Elder speaks to the media after casting his ballot September 8, 2021 in the special recall election, outside a polling location in Los Angeles, California. (Photo by ROBYN BECK/AFP via Getty Images)

“Perhaps you should ask them,” she responded, when asked why the LA Times would use the misleading photo.

The LA Times has not responded to a number of requests for comment from the DCNF. (RELATED: As Virginia Governor’s Race Draws To A Close, McAuliffe Will Not Name One Abortion Restriction He Supports)

The woman whose face Elder is touching in the LA Times photograph expressed outrage at the publication in a Friday tweet, calling the photo “deceiving.”

Yesterday @larryelder was my guest. We were attacked by a group yelling racial slurs, a white woman in a gorilla mask threw eggs. Yet @latimes finds a deceiving pic of us about to hug to confuse the story- a HATE CRIME was committed against a black man running for Governor of CA pic.twitter.com/RJxm2rmDiw

“Yesterday @larryelder was my guest,” she tweeted. “We were attacked by a group yelling racial slurs, a white woman in a gorilla mask threw eggs. Yet @latimes finds a deceiving pic of us about to hug to confuse the story- a HATE CRIME was committed against a black man running for Governor of CA.”