I took my daughter to visit Flags of Valor in St. Louis, Missouri — and to pay a visit to an old friend.

Flags of Valor is a massive flag display honoring every American service member who has fallen since 9/11 in the Global War on Terror. For the 20th anniversary of the 9/11 attacks, that display covered “Art Hill,” the hill directly in front of the St. Louis Art Museum in Forest Park. (RELATED: Tribute To 9/11 Victims To Resume For 20th Anniversary After Being Paused Due To Pandemic)

Flags of Valor display pays tribute to those killed in War on Terror https://t.co/NwIrO18KbS

I went to visit Flags of Valor alone several years earlier, but this time I took my 17-year-old daughter with me. The display alone was breathtaking.

I walked to the center of the display, between the long rows of flags — each adorned with a photo of the fallen service member and a dog tag stamped with their name and the date they were killed.

Standing in the middle of the field, I turned around. And in every direction, everything I could see — as far as I could see — was a sea of red, white and blue.

When the breeze lifted the flags, the constant clink of dog tags hitting the metal flag poles was the only sound that could be heard. Even as others walked through the display, no one spoke above a whisper.

Before we left, I took my daughter to see one specific flag — the one honoring a fallen combat medic from Sour Lake, Texas: Staff Sergeant Leston Michael Winters. 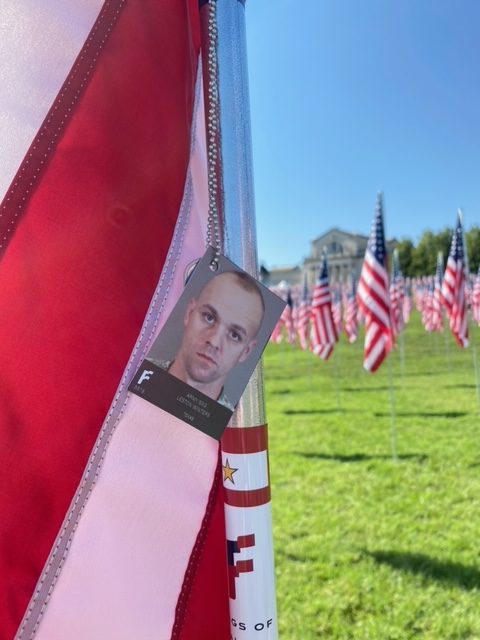 I worked with Winters just over a decade ago at General Leonard Wood Army Community Hospital at Fort Leonard Wood, Missouri. He was a medic working in the emergency room and I was an X-ray tech working across the hall in radiology.

Winters was truly, as they say in the Soldier’s Creed, “an expert” and “a professional.” I never saw him without a smile — unless someone was standing in the way of his next cigarette.

And one weekend, after my daughter was bitten by a spider at a family picnic, Winters was the medic assigned to her room in the emergency room.

Even though we were friends, he barely acknowledged my presence the entire time we were in the emergency room. She was his whole focus and mission. He told her that she didn’t have to be scared, and she believed him. He made her feel safe.

He paid the ultimate price for her. For me. For every one of us.