Led by activists from ShutDownDC, protesters gathered at a Maryland park before marching about half a mile down the street to the Kavanaugh family home, located in Chevy Case, one of the wealthiest areas in the country.

Multiple police vehicles were stationed outside the house, a number of policemen stood around the lawn, and police patrolled the surrounding area. A local Maryland outlet had previously reported that a heavy police presence and traffic should be expected in the area.

The Daily Caller News Foundation did not see any signs that the Kavanaugh family was home, though multiple lights in the house were on. Aside from the protest, the neighborhood was very quiet, and the DCNF observed one man walking by the Kavanaugh home who thanked the police for their presence. (RELATED: Video Shows Anti-Kavanaugh Lawyer Saying Christine Blasey Ford Wanted ‘Asterisk’ By Justice’s Name)

From their front porch, neighborhood children watched the protesters call on Kavanaugh to resign and discuss their own personal abortion stories, fears that Roe v. Wade would be overturned, and more.

“There are no bad abortions because the right to pick and choose how to plan your family is a human right,” one activist shouted to the crowd to applause, adding, “Abortion is responsible!”

The protesters voiced concerns that women would soon lose access to abortion and one activist emphasized that “it is possible to perform a safe, self managed abortion at home,” apparently referring to the use of abortion drugs. 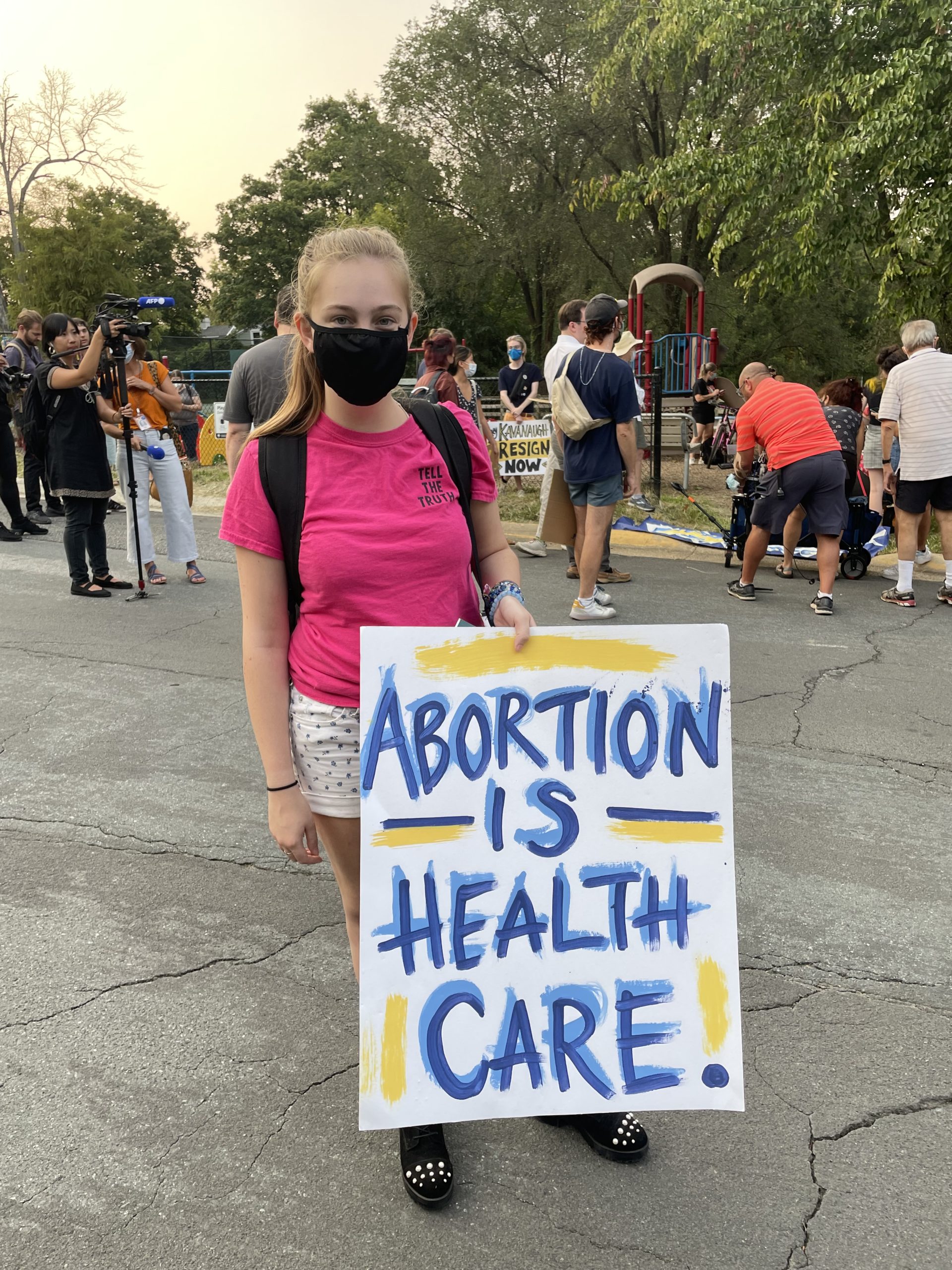 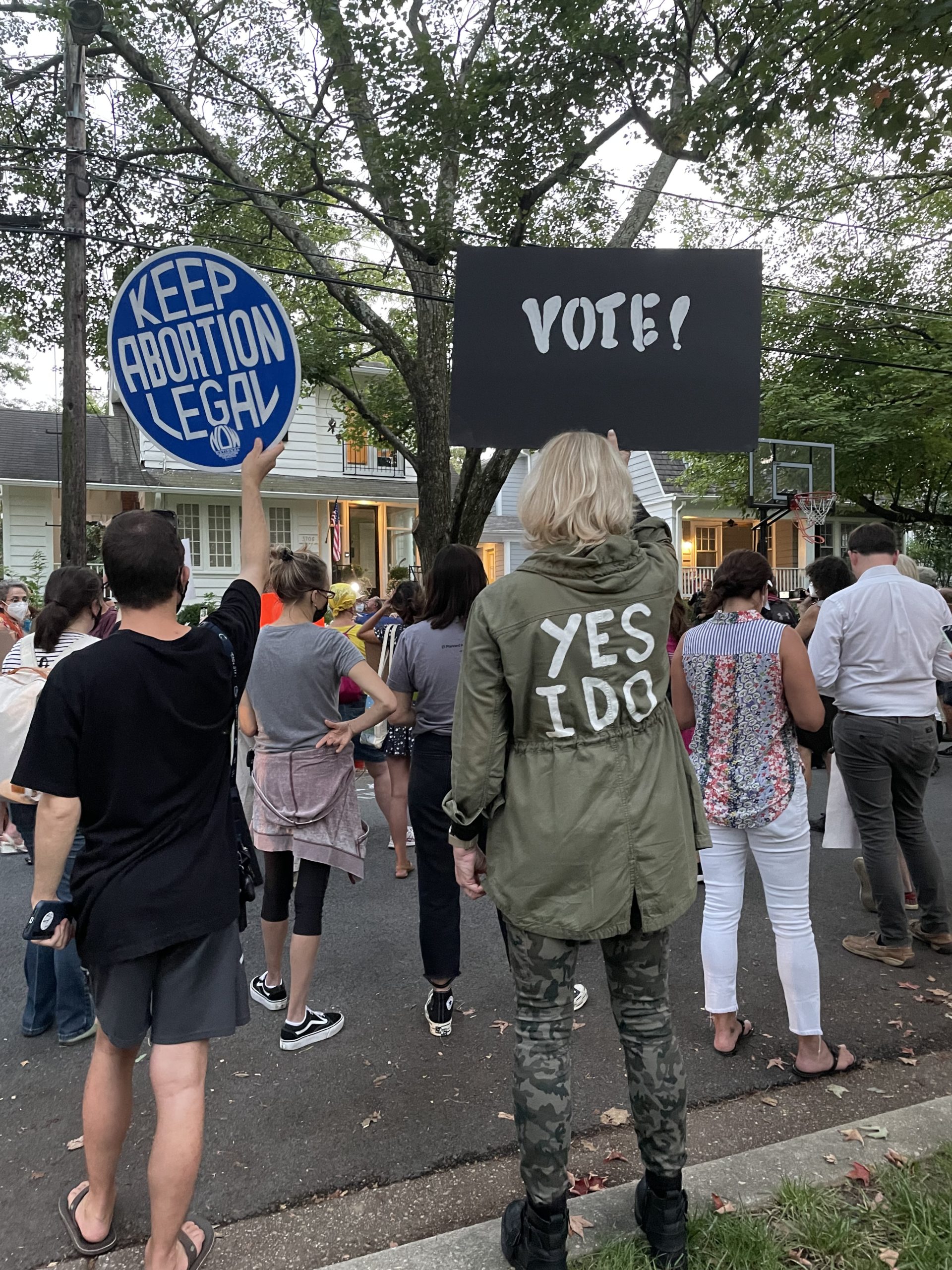 Protestors stand outside the Kavanaugh home. Photo by the Daily Caller News Foundation. 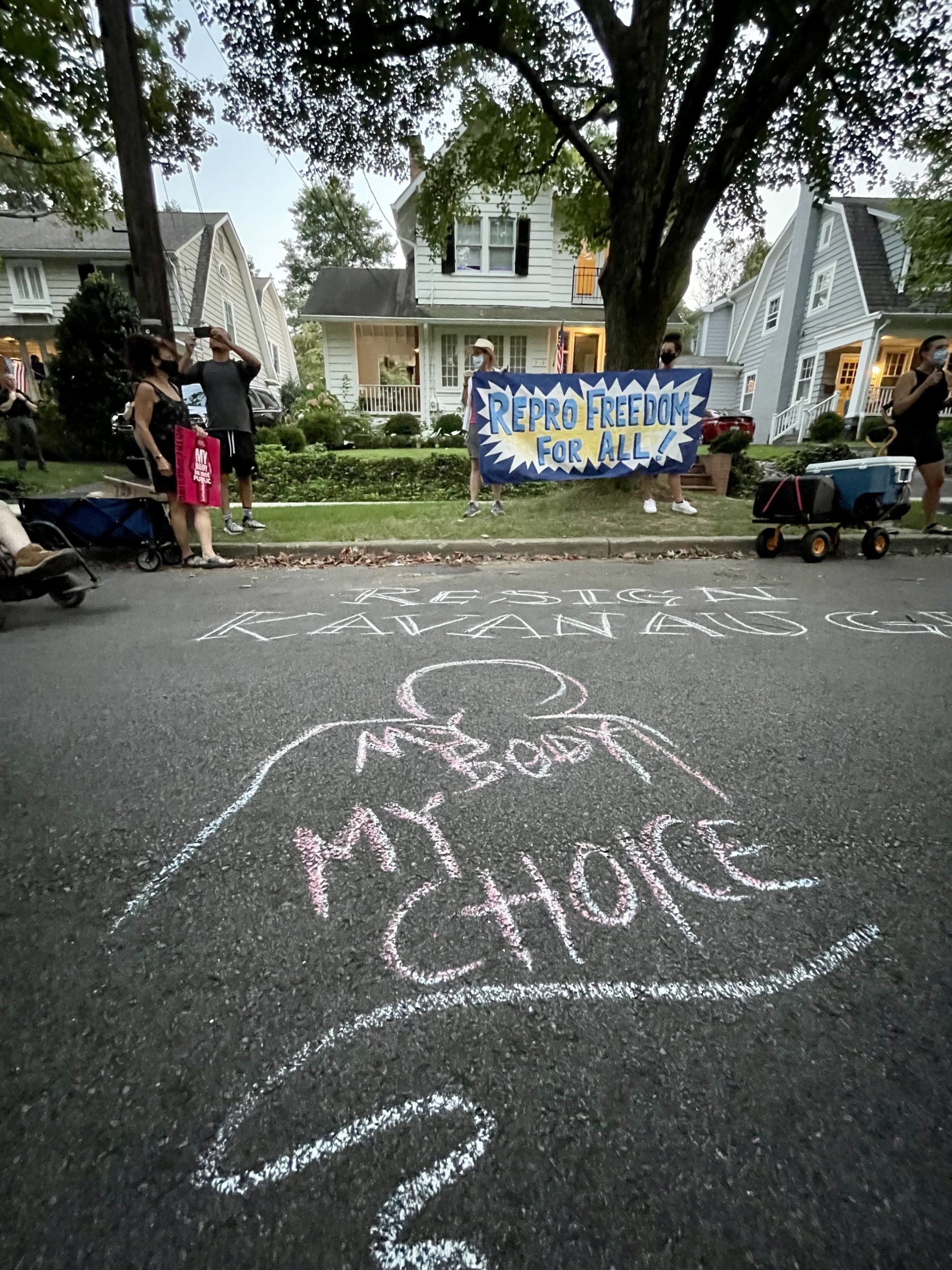 Protestors wrote “Resign Kavanaugh” and “My Body My Choice” in chalk in front of the Supreme Court justice’s house. Police washed the chalk writing away with water after the protest. Photo by the Daily Caller News Foundation.

Democratic candidate for Montgomery County council Kristin Mink told the small crowd that as part of her “family making journey,” she aborted one of her children early on in the pregnancy.

“Like thousands of others, I took to the streets to protest this nomination,” she said. “And I thought there might be a chance that we might have just a small handful of Republican senators who might be brave enough to put party second. That obviously, as we saw, was not the case.”

“We knew that this was going to be the canary in the coal mine that would lead to the downfall of so many other rights,” Mink added of Kavanaugh’s confirmation. “We’ve seen so many things, not that just have already happened, but are on the dockets coming up.”

The emotional backlash against Kavanaugh’s confirmation escalated following multiple allegations of sexual assault against the future Supreme Court justice. Accuser Christine Blasey Ford’s lawyer would later admit that putting an “asterisk” next to Kavanaugh’s name before “he takes a scalpel” to Roe v. Wade was “part of what motivated Christine” to accuse him.