The U.S. ended its combat mission in Afghanistan in August, and the federal government is now preparing to relocate thousands of Afghan refugees in a number of swing states.

President Joe Biden is planning to ask Congress for funding to bring around 95,000 people from Afghanistan to the U.S. in total, The Hill reported. A senior administration official said the funding would be used to help bring 65,000 people by the end of September, and an additional 30,000 people over the course of one year.

The Department of Defense (DOD) has been preparing for up to 30,000 Special Immigrant Visa (SIV) applicants to be housed at U.S. Army bases such as Fort McCoy in Wisconsin and Fort Bliss in Texas. The Department of Homeland Security (DHS) is responsible for security and health screenings in order to vet the incoming refugees.

Swing states where Biden beat former President Donald Trump by less than three percentage points are expected to receive at least 1,000 people each, among the first group of refugees being resettled in September, according to State Department numbers.

The State Department has also outlined several resettlement options for Afghan refugees coming to the U.S. under the SIV program. The department posted a list of 19 cities from which applicants can indicate a preference, either settling near people they know or letting an agency find a location based on the immigrant’s personal information.

Although no particular geographic restrictions have been placed on where SIV applicants can relocate, the State Department notes on its website that refugees should consider that the cost-of-living in some regions of the U.S. can be much higher than other parts of the country.

The department warned that resettlement benefits “may not comfortably cover the cost of living” in regions like the Washington, D.C., metropolitan area and parts of California, where the cost-of-living is significant and job opportunities are often scarce compared to other regions. 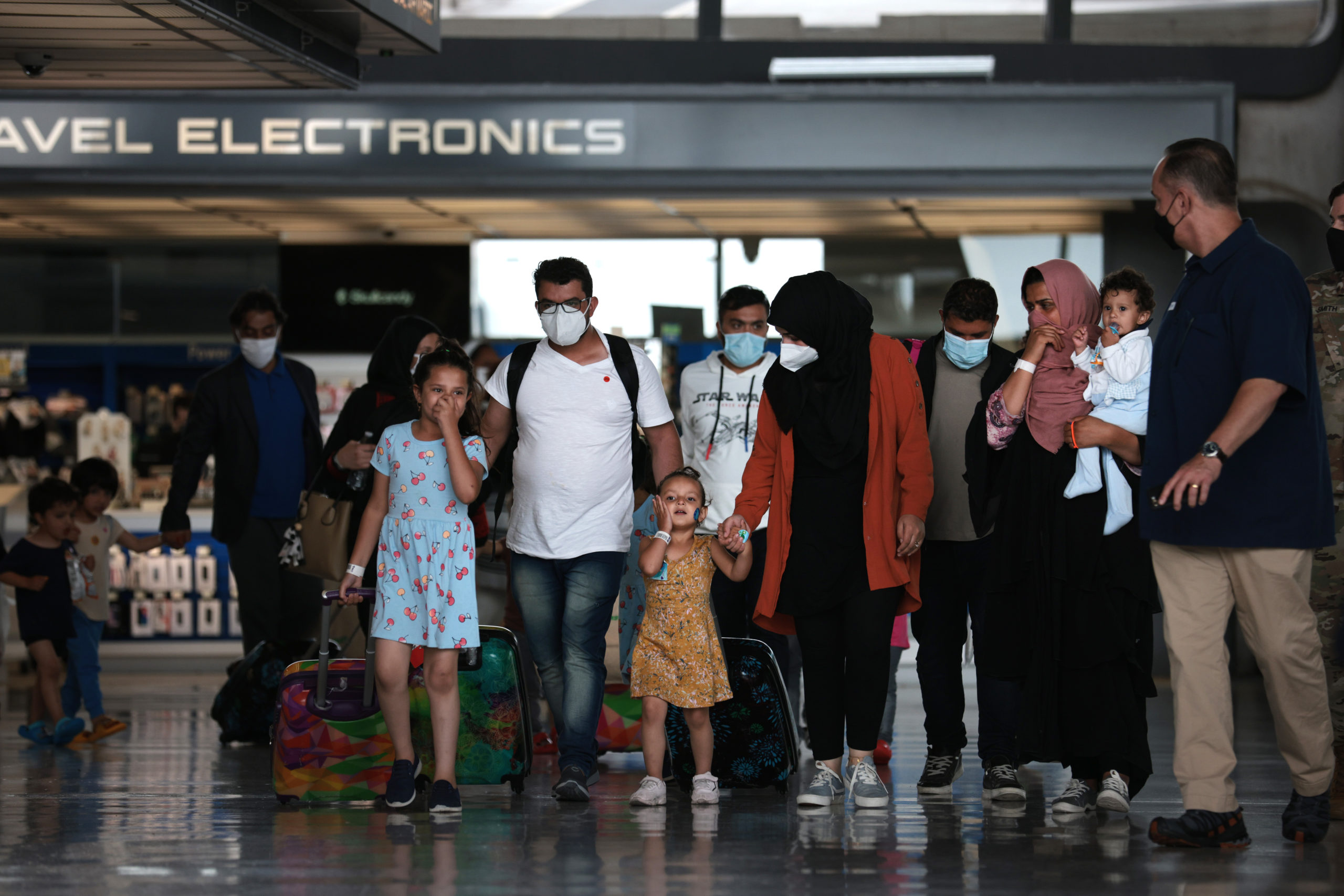 Refugees are led through the departure terminal to a bus at Dulles International Airport after being evacuated from Kabul following the Taliban takeover of Afghanistan on August 31, 2021 in Dulles, Virginia (Anna Moneymaker/Getty Images)

Instead, the department advises refugees to consider “the need for a reasonable cost of living, housing availability, employment opportunities and strong resettlement services and support” when making a decision on where to relocate.

Six of the 19 cities included in the State Department’s list are located in swing states where Biden beat Trump by less than three percentage points: Phoenix, Atlanta, Raleigh-Durham, Las Vegas, Philadelphia and Pittsburgh.

Ohio has typically been considered a swing state, although Trump comfortably won the state in 2020, and Cleveland is included in the list as well. Although Texas is not considered a swing state, Democrats are attempting to flip the state and the Republican margin of victory has been declining. Three cities in Texas — Houston, Dallas-Forth Worth and Austin — are included in the list.

The State Department’s notice for SIV applicants indicates the Biden administration wants to relocate refugees in places with a suitable cost-of-living and ample job opportunities. Democrat-led states like New York and California have among the highest costs-of-living in the country, making places like New York City or Los Angeles less desirable for refugees. (RELATED: Afghan Women Forced Into Marriages With Men Eligible For Evacuation)

But some have expressed skepticism about the Biden administration’s plan to resettle the bulk of refugees in swing states. Fox News host and Daily Caller co-founder Tucker Carlson suggested in a Sept. 1 broadcast that Democrats are using refugee resettlement as a means to consolidate voting blocs for future elections.

“You may notice that these communities include an awful lot of swing districts in swing states all over the United States. It’s not just Virginia,” he said after bringing up the State Department list. “Three of these communities are in Texas, a state the Democratic party has tried to flip for years now.”

“Does Pennsylvania need more people? Probably not, Lot of unemployment between Pittsburgh and Philadelphia,” he continued. “But Pennsylvania is also a state that Donald Trump won in 2016. Maybe they should go there.”