In the waning days of the COVID-19 pandemic, vaccine hesitancy and avoidance has emerged as a predominantly right-wing phenomenon, but it wasn’t always that way.

As pharmaceutical companies prepared their COVID-19 vaccines in late 2020, Democrats claimed that the vaccines could not be trusted due to alleged political interference in the Food and Drug Administration’s (FDA) approval process. Then-candidates Joe Biden and Kamala Harris, and New York Gov. Andrew Cuomo, as well as media figures like MSNBC’s Joy Reid, suggested that Trump would rush vaccines through the approval process to create a political win, even if they were not safe for Americans to receive.

“If Donald Trump tells me to take it, I’m not taking it,” Harris said during the Oct. 7, 2020 vice presidential debate.

Cuomo told ABC’s George Stephanopoulos in October 2020 that the Centers for Disease Control and Prevention (CDC) and FDA didn’t “have any credibility,” so Americans should be skeptical about a vaccine. (RELATED: ANALYSIS: The Left Said It Wouldn’t Trust The Trump Vaccine. Now They’re Shaming The Unvaccinated)

The 2020 election was the second one in a row to feature a left-wing candidate sparking unwarranted fears about vaccines. Green Party candidate Jill Stein, who received 1.1% of the popular vote in 2016, declared that issues relating to “vaccination schedule” and “toxic substances like mercury” had not all been “completely resolved.”

“People do not trust a Food and Drug Administration, or even the CDC for that matter, where corporate influence and the pharmaceutical industry has a lot of influence,” she told The Washington Post.

Stein’s position is embraced by some others on the far left. Actor Jim Carrey, a self-described socialist, slammed vaccines as “poisoning kids with mercury” following California’s decision to tighten vaccine requirements due to a 2015 measles outbreak traced to Disneyland. The disease spread to 17 other states, infecting 125 people.

Southern California was a repeated hot spot for whooping cough in the 2010s, and doctors blamed the area’s low vaccination rates. The state reported over 10,000 cases in 2014. Los Angeles County had more than 10% of the infections, with the large numbers driven by low vaccination rates of children in some of the area’s most prestigious schools, according to an analysis conducted by The Hollywood Reporter (THR). Multiple preschools had whooping cough vaccination rates of less than 50%, THR found, with the least vaccinated clustered in neighborhoods like Beverly Hills and Malibu.

The U.S. as a whole has repeatedly broken measles records. The country set a 20 year measles case record in 2014 with 667 infections. Seventy percent of the people who contracted the disease went unvaccinated. Five years later, the U.S. broke the thousand-case mark for the first time since 1992, with 1,282 infections. 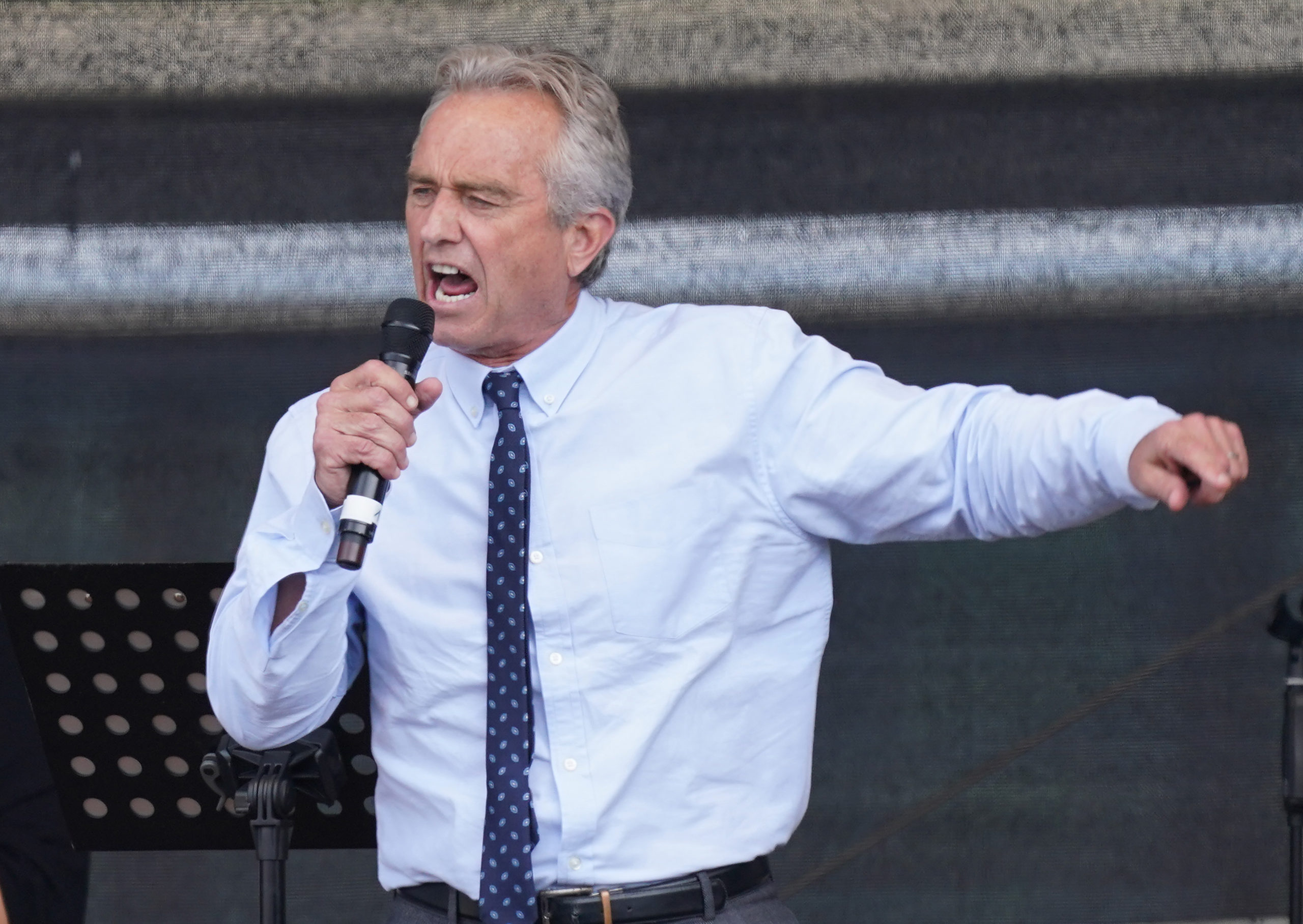 BERLIN, GERMANY – AUGUST 29: Robert F. Kennedy Jr., nephew of former U.S. President John F. Kennedy, speaks to people from a wide spectrum gathered under the Victory Column in the city center to hear speeches during a protest against coronavirus-related restrictions and government policy on August 29, 2020 in Berlin, Germany. City authorities had banned the planned protest, citing the flouting of social distancing by participants in a similar march that drew at least 17,000 people a few weeks ago, but a court overturned the ban. (Photo by Sean Gallup/Getty Images)

Now, during the COVID-19 pandemic, the demographics have shifted. Seventy-six percent of eligible Los Angeles County residents have received at least one shot of COVID-19 vaccine, while 71% of the county’s voters voted against recalling Gov. Gavin Newsom.

Here’s a *very* rough approximation of the religious composition of the unvaccinated.

Although leading Republican politicians, including Trump, Florida Gov. Ron DeSantis, and Kentucky Sen. Mitch McConnell, have encouraged their supporters to get vaccinated, counties that voted for Biden in 2020 had vaccination rates 13 percentage points higher than counties that voted for Trump, a Kaiser Family Foundation analysis found.