Clinton helped his friend raise more than $425k at the Skaneateles, New York event, where tickets ranged from $1,000 per person to $100,000 for a host. McAuliffe reportedly owes much of his previous political success to his friend’s public support, and the two speak regularly and consider one another family. (RELATED: ‘Would You Mind Taking A Crack At It?’ Photos Show Alleged Epstein Victim Massaging Bill Clinton)

The Virginia Democrat isn’t the only politician leaning on the former president for political bolstering. Back in August 2020, Democrats elevated Clinton to speak at the 2020 Democratic National Convention, and in March, Clinton co-hosted a virtual event on women’s empowerment with Vice President Kamala Harris.

The 42nd president of the U.S. has a reputation for political and personal charm and has been scandalously linked to many young women, including former lounge singer and Arkansas state employee Gennifer Flowers, who said that they carried on a 12-year relationship. He denied this relationship and other accusations of sexual assault.

“I think you can expect more of these stories as long as they’re down there handing out money,” then-Arkansas Gov. Clinton said of Flowers’ claims in 1992 as he campaigned for president.  (RELATED: ‘I Want The Same Equal Treatment’: Biden Accuser Tara Reade Tears Into Media, Women’s Groups, Democratic Politicians) 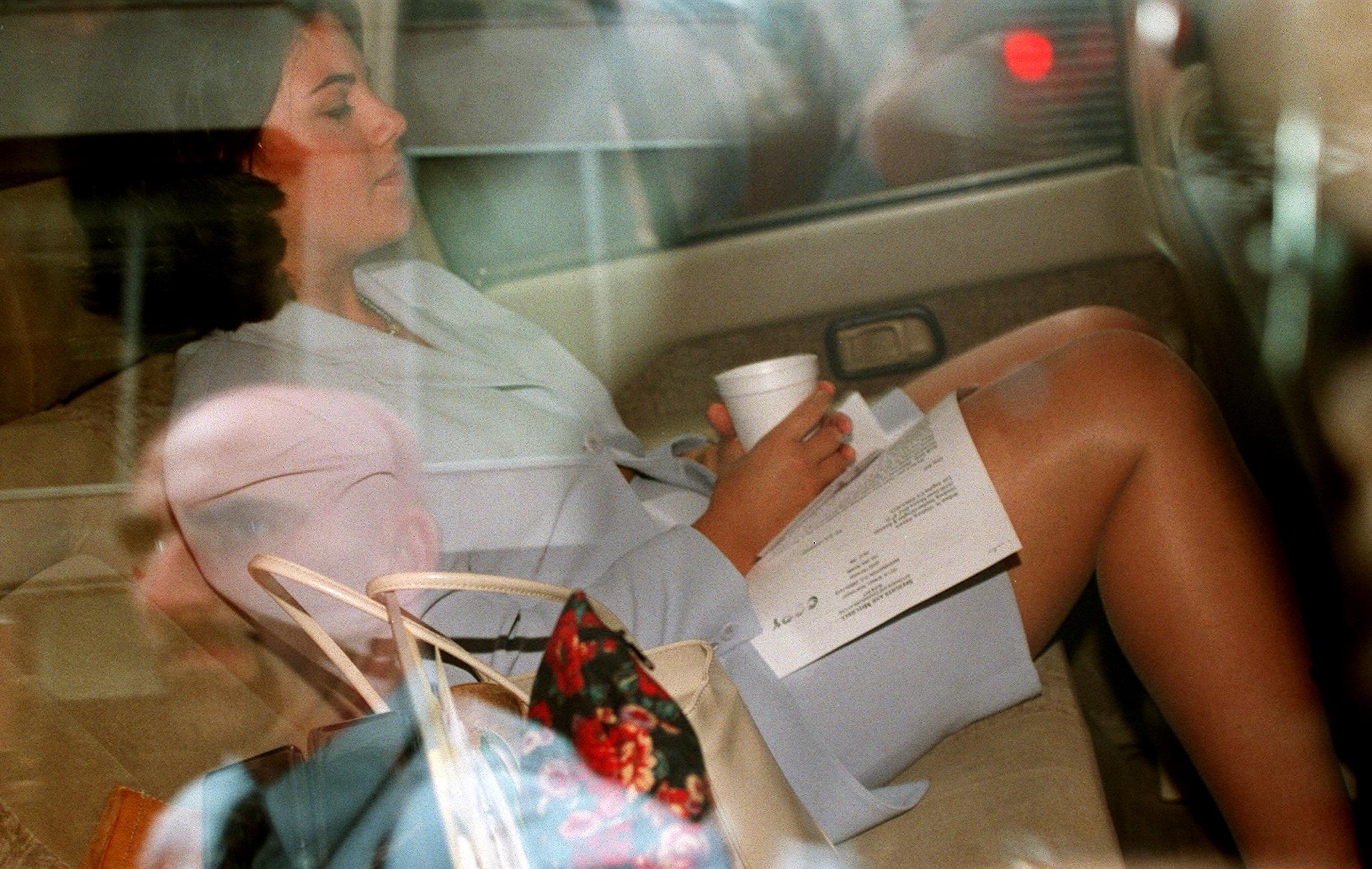 Former White House intern Monica Lewinsky is photographed through a window of a car 28 July outside of her attorneys’ office in Washington, DC. (TIM SLOAN/AFP via Getty Images)

”I did not have sexual relations with that woman,” he infamously lied regarding his relationship with former White House intern Monica Lewinsky. He later admitted to the affair and was impeached for perjury and obstruction of justice.

Clinton stands accused of crimes far more serious than unfaithfulness to his wife, however.

Aside from suspicions about his relationship with convicted sex offender Jeffrey Epstein, (flight logs show that Clinton took at least 26 trips aboard Epstein’s plane, the Lolita Express) Clinton has been accused of sexually harassing Paula Jones, of raping Juanita Broaddrick, of sexually assaulting Kathleen Willey, and of repeatedly sexually assaulting Leslie Millwee.

Clinton did not respond to requests for comment regarding this story. He continues to drift in and out of media reports and Democratic fundraisers and events, apparently unscathed by the slew of allegations against him.

“Can you believe we still must watch Bill Clinton parade around Martha’s Vineyard, live a normal life, and campaign for other Democrats?” accuser Millwee said in an interview with the Daily Caller News Foundation. “What’s absolutely amazing is that candidates still want him to participate! Is there no shame or honor left in America?” 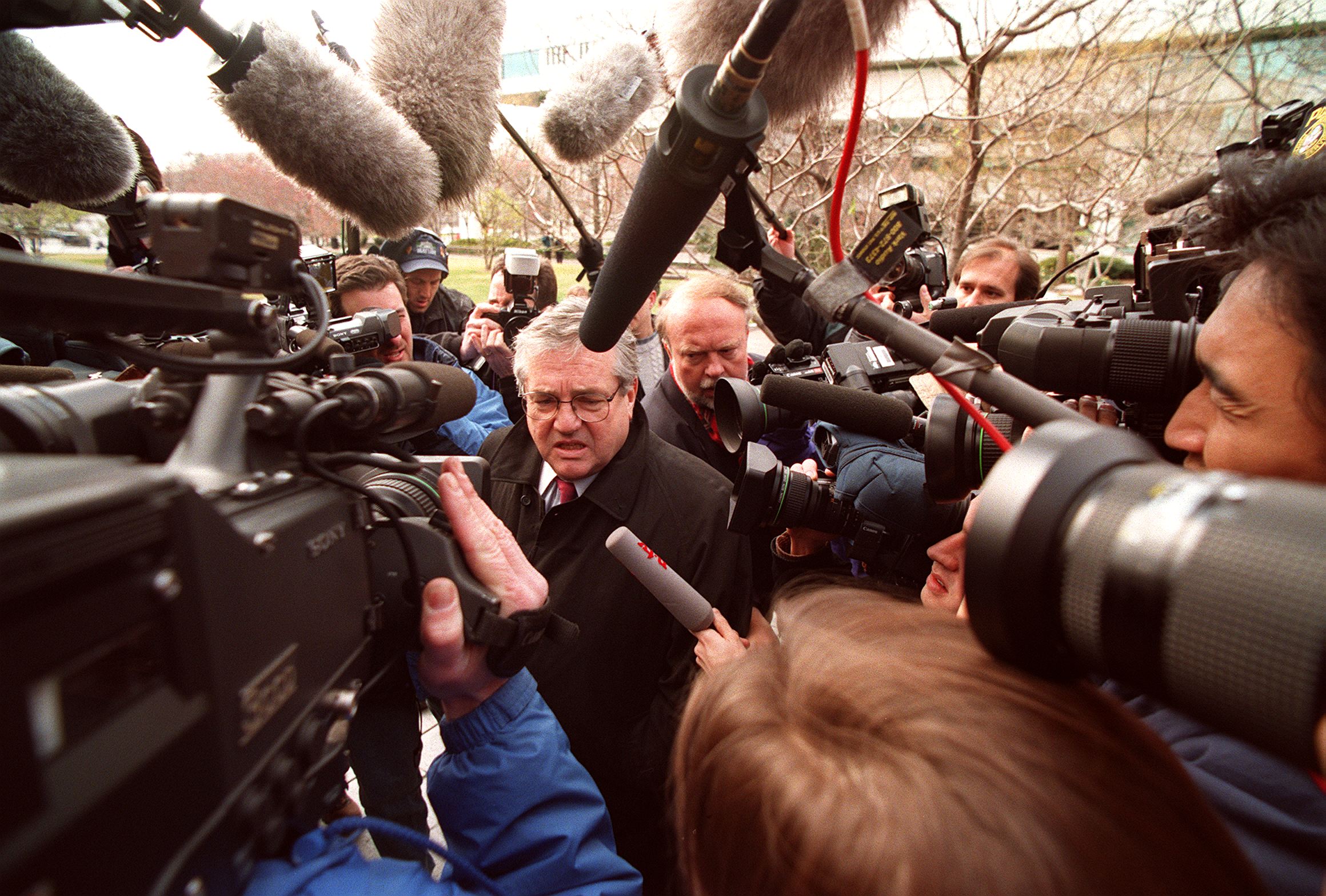 Robert Bennett (C), US President Bill Clinton’s personal attorney, makes his way through a crowd of photographers as he arrives at the US District Courthouse 05 March in Washington, DC. (JOYCE NALTCHAYAN/AFP via Getty Images)

Millwee, who alleges that Clinton repeatedly sexually assaulted her in 1980 when she worked at a Arkansas TV station, told the DCNF that Democratic acceptance of Clinton “magnifies the absurd double standard and two-tiered justice system we have in this country.”

“It progressively gets worse,” she added, “with even those considered middle-of-the-road dare not speak out against the silence on the left, MSM and their lies and misinformation.” (RELATED: #METOO ‘Never Acknowledged We Exist’: Clinton Accusers Condemn Harris, Clinton Co-Hosting Women’s Empowerment Event)

When Clinton was scheduled to co-host the women’s empowerment event with Harris in March, the DCNF reached out to a number of prominent women’s groups, including Planned Parenthood, Emily’s List, the Women’s March, Time’s Up Now, the Center for Reproductive Rights, the National Abortion Rights Action League (NARAL), and the American Civil Liberties Union.

None of these organizations voiced concerns about Clinton’s upcoming appearance and none responded to requests for comment from the DCNF, though they clamored to support Christine Blasey Ford in September 2018 when she accused Kavanaugh of sexually assaulting her in high school. 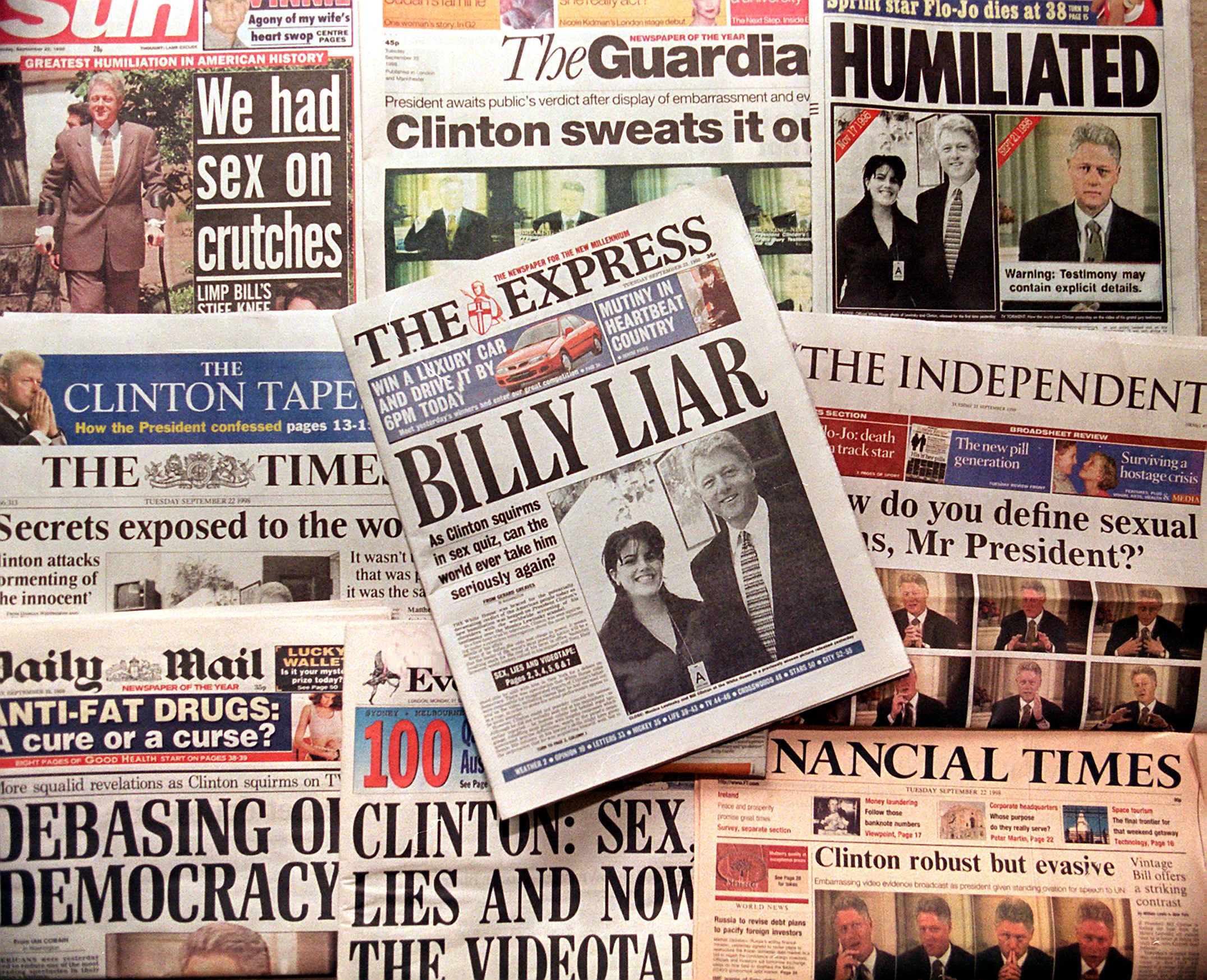 Most of the organizations also remained silent when President Joe Biden and former Democratic New York Gov. Andrew Cuomo faced sexual misconduct allegations. Both Biden and Cuomo have denied inappropriate conduct, though Cuomo was ultimately forced to resign over the allegations.

#MeToo accusers like Tara Reade have called out the hypocrisy and double standards at play, pointing to the wave of encouragement, backing and support that Blasey Ford received from progressive organizations and the Democratic Party.

“I’m sorry that I’m politically inconvenient but my perpetrator was Joe Biden,” Reade told the DCNF in April 2020. “And people need to deal with it.”

Reade believes Democrats protect the likes of Clinton, Cuomo, and Biden by controlling messaging about their scandals through the media, she told the DCNF.

Reade pointed to the treatment accusers Jones and Broaddrick have received for coming forward with their accusations — particularly at the hands of former Secretary of State Hillary Clinton, who has busied herself for decades with stamping out rumors of her husband’s extra-marital affairs and allegations of sexual assault.

“Like me,” Reade said, “the establishment media marginalized us and silenced us.” (RELATED: TIME’S UP Waged War On Kavanaugh But Covered For Cuomo and Biden)

Organizations specifically created to aid and empower women, such as Time’s Up and Ultra Violet, did not respond to requests for comment for this story. Time’s Up was recently found to have covered for both Cuomo and Biden after waging war against Kavanaugh on behalf of accuser Christine Blasey Ford.

“The hypocrisy of the Democratic Party embracing the MeToo movement is indicative of how calculating and ugly this corruption is by casting their tentacles into Times Up and Women’s March and any pro woman movement while supporting and enabling monsters,” Reade told the DCNF.

Though the allegations against Clinton have been widely reported and Republicans, such as former President Donald Trump, are quick to reference them as easy political points, Clinton appears to have escaped any serious kind of #MeToo reckoning.

As more and more women came forward in 2017 with allegations of sexual assault and harassment against powerful men, including Trump, Clinton’s conduct again came under scrutiny. Democratic New York Sen. Kirsten Gillibrand, who holds Clinton’s wife’s former seat in the Senate, said at the time that she thought Clinton should have resigned.

“Yes, I think that is the appropriate response,” she said in 2017 of the Lewinsky affair.

“I think we got it wrong,” wrote liberal blogger Matthew Yglesias in a November 2017 Vox.com piece titled, “Bill Clinton should have resigned.”

Writer Caitlin Flanagan called for the Democratic Party to “make its own reckoning of the way it protected Bill Clinton,” Michelle Goldberg wrote in The New York Times, “I Believe Juanita,” and former Clinton administration official David Rothkopf said Lewinsky “deserves an apology from many of us she has never received.”

MSNBC host Chris Hayes tweeted: “As gross and cynical and hypocrtical as the right’s ‘what about Bill Clinton’ stuff is, it’s also true that Democrats and the center left are overdue for a real reckoning with the allegations against him.”

During a June 2018 interview on the #MeToo movement, the former president said he did not think the #METOO movement would have changed his response to the Lewinsky scandal, saying, “I don’t think it would be an issue because people would be using the facts instead of the imagined facts.”

He also admitted he had never privately apologized to the former White House intern and disagreed with the idea that he had not faced any kind of reckoning.

“Nobody believes that I got out of that for free,” he said of the Lewinsky affair. “I left the White House with $16 million in debt.”

“I like the #MeToo movement,” he added. “It’s way overdue. It doesn’t mean I agree with everything, I still have some questions about some of the decisions that have been made.” 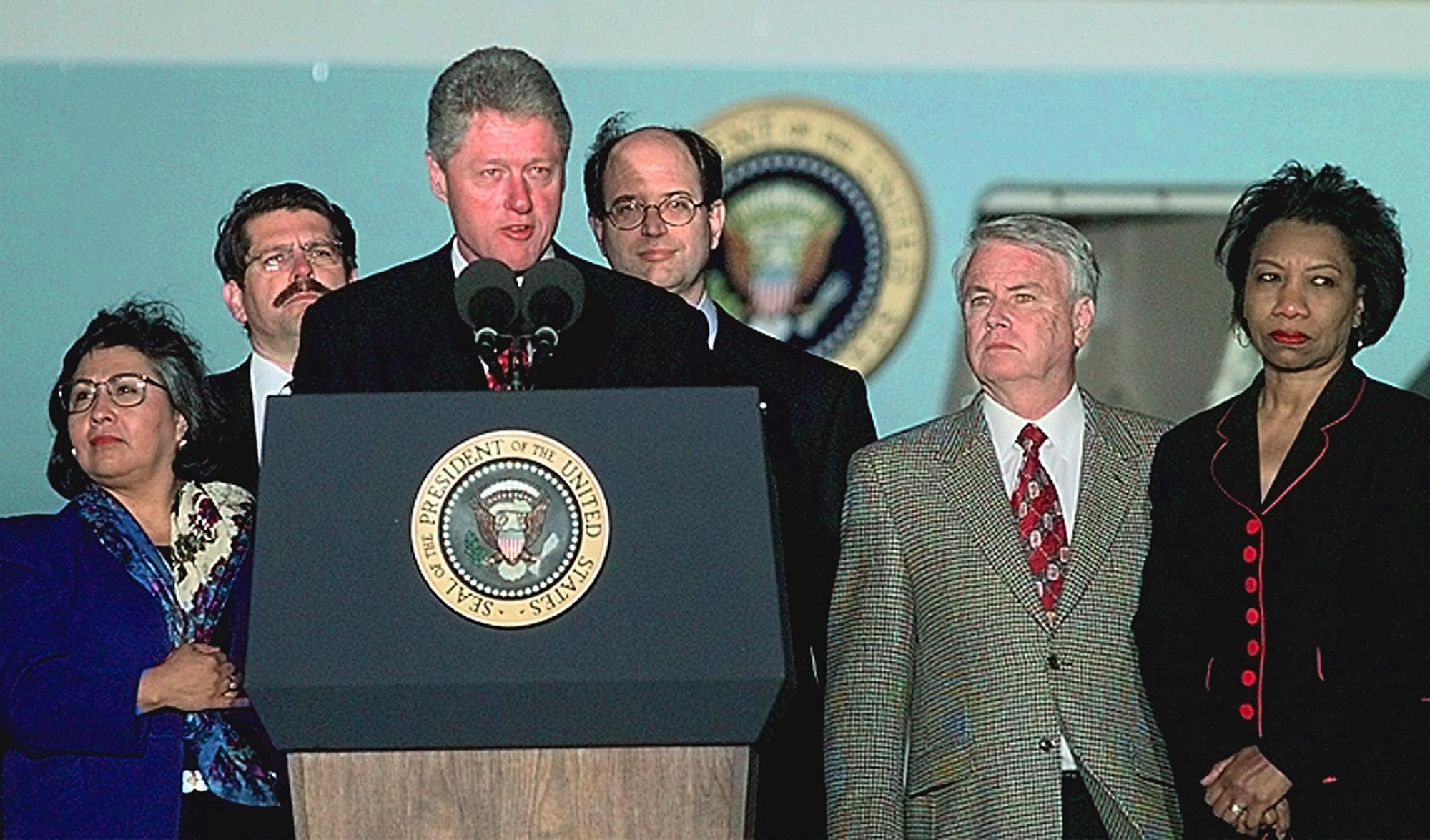 US President Bill Clinton makes a statement 28 February in Los Angeles in front of Air Force One on disaster relief related to the El Nino damage in southern California. (OYCE NALTCHAYAN/AFP via Getty Images)

Several of his accusers told the DCNF they cannot fathom why he is still considered politically advantageous for Democrats to fundraise or spend time with. (RELATED: England To Honor Prince Andrew On His Birthday Despite Epstein Associations, Outrage)

“Listen, I think the whole world wants to know why, especially Prince Andrew,” laughed accuser Juanita Broaddrick during a September phone interview. “It’s amazing. He doesn’t seem to go under at all. Why he’s not been cancelled, I have no idea.”

Broaddrick, who has accused Clinton of raping her in a hotel room when she worked for his campaign, speculated that Clinton’s friends, colleagues, or former staffers may remain silent out of embarrassment or shame.

“People are realizing this, but do they just not want to face that they supported and kept a serial sexual predator in the Oval Office?” she asked. “I don’t know.” 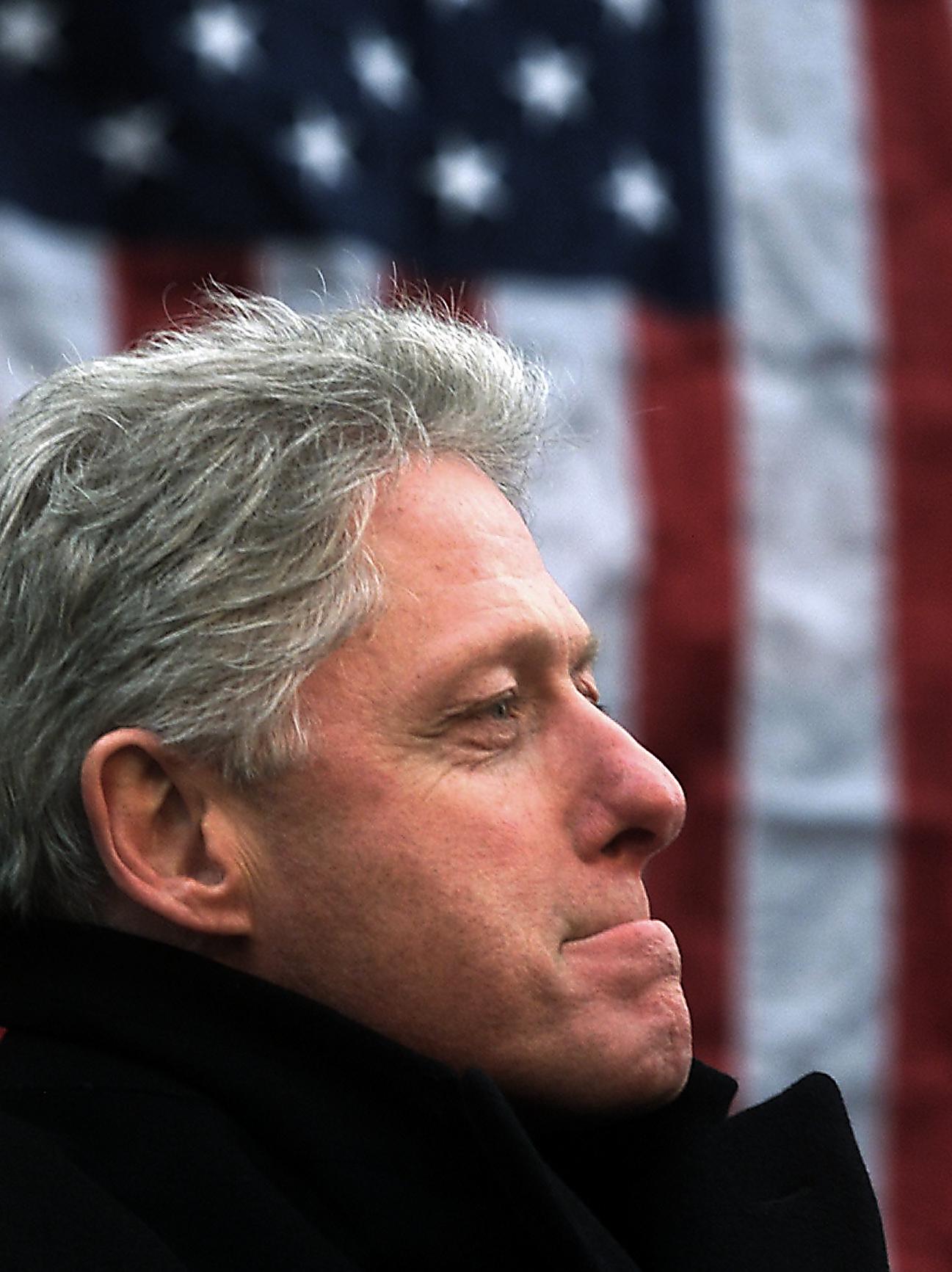 Millwee pointed to the many allegations against the former president, noting that Bill Cosby was convicted and imprisoned for similar allegations. (RELATED: ‘You Better Get Some Ice For That’: Here’s What To Know About Bill Clinton And #METOO Allegations)

“Nearly every media outlet ignores or actively covers up for both Clintons,” she said. “Why? Dirt on others? Money? Political posturing? I wish I had a reasonable and substantial answer why anyone would ignore this man’s behaviors and crimes, or ever consider him an attribute to attract voters.”

“Like many of the other victims, I’d love my day in court or at least be able to present the facts about what happened to me,” she said. “I throw down the gauntlet to those in the MSM. Who is willing to participating in bringing this rapist and sexual assaulter/abuser to justice?”