The New York Times has been a driving force behind establishment media narratives since its inception 170 years ago.

However, the outlet’s reporting on issues ranging from pre-World War II Europe to the Trump administration has included false information that it has been forced to correct or retract.

These are 10 of the biggest whoppers published by the NYT.

1. No Famine In Stalin’s Ukraine

NYT Moscow bureau chief Walter Duranty was a key player in covering up the Soviet Union Holodomor genocide during his tenure between 1922 and 1936.

Duranty claimed grain production in Ukraine, the breadbasket of the Soviet Union, allowed the country to fuel its industrial development. But the outlet’s coverage of Ukraine in the 1930’s dismissed growing concerns about mass starvation and the Holodomor genocide, which historians estimate killed nearly 4 million people and attribute to Soviet Union leader Joseph Stalin’s collectivization policies. (RELATED: How 1 Freelance Reporter Nailed The New York Times For Covering Up Soviet Genocide) 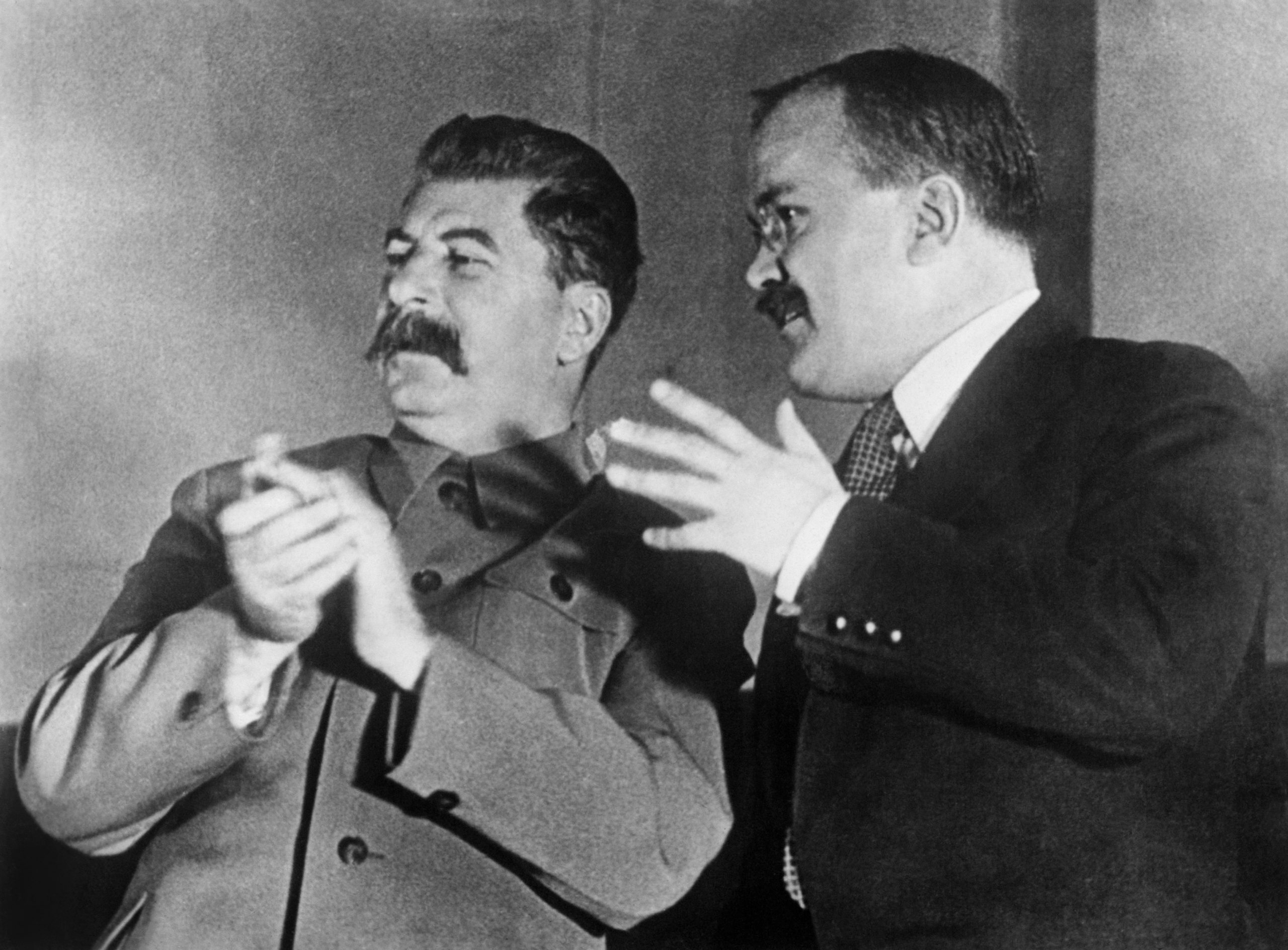 Duranty won the Pulitzer Prize in 1932 for his reporting on the Soviet Union’s Five-Year Plans. The first and second plans from 1928 to 1937 were behind the failed agricultural policies that led to famine in Ukraine. The Pulitzer Prize Board decided not to revoke his prize following an investigation in 2003, but noted his reporting “falls seriously short” of modern standards.

The NYT later distanced itself from Duranty — but not his Pulitzer Prize — and criticized “his consistent underestimation of Stalin’s brutality” in a statement in 2003. The outlet said Duranty took Soviet propaganda “at face value” and its coverage had been “completely misleading.”

The NYT’s coverage of Nazi Germany in the decade before World War II has been criticized for its glowing portrayals of Adolf Hitler and minimization of the regime’s atrocities, journalist Ashley Rindsberg wrote in “The Gray Lady Blinked.”

NYT Berlin bureau chief Guido Enderis was known for his “loudmouthed defense of Nazism” and his reporting even prompted a colleague to ask the paper’s Jewish publisher, Arthur Hays Sulzberger, whether the NYT should “do something about its Nazi correspondent,” according to Tablet Magazine.

Enderis published often under his byline about Nazi Germany during his tenure, such as an article in 1933 that called Nazi propagandist Joseph Goebbels an “outstanding go-getter for his party.”

NYT reporter Judith Miller, who won a 2001 Pulitzer for her series on Middle Eastern terrorism, wrote a number of articles as early as 2002 claiming — based on unnamed, but highly-placed sources — that Iraqi leader Saddam Hussein “already had or was acquiring an arsenal of weapons of mass destruction (WMDs),” using opposition politician Ahmed Chalabi as one of her sources.

The outlet’s reporting on Hussein has been considered a driving force behind the Bush administration’s decision to go to war in Iraq. 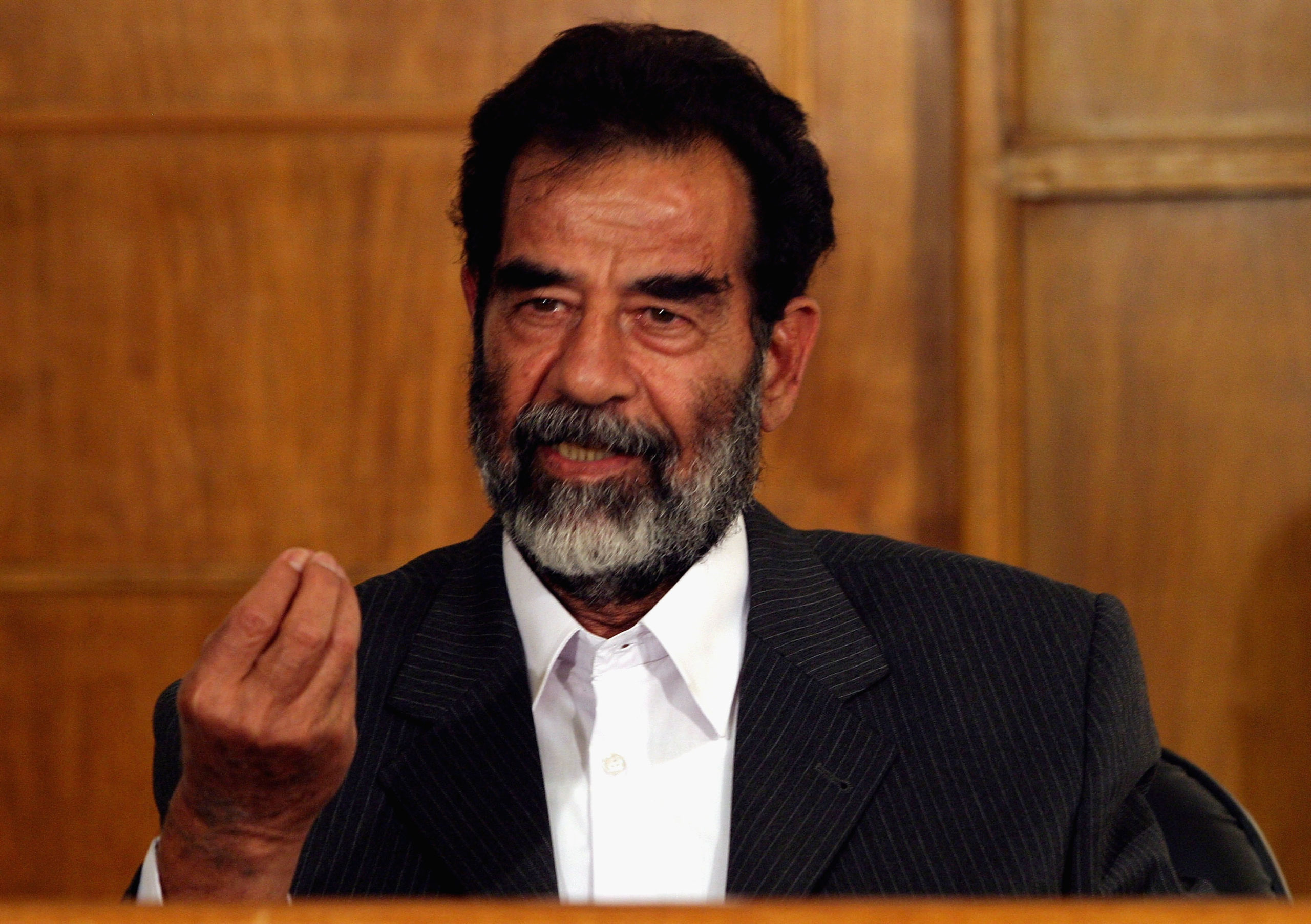 Former Iraqi President Saddam Hussein gestures as he responds to a as a list of charges that he and 11 other high level defendants are facing in an Iraqi courtroom July 1, 2004 in Baghdad, Iraq (Karen Ballard/Pool – Getty Images)

But there has been little evidence since the Iraq War that Hussein was developing WMDs and the outlet published a critique of its own reporting in 2004. The NYT editorial board admitted its coverage of the issue had been flawed and relied too much on suspect intelligence sources.

“We have found a number of instances of coverage that was not as rigorous as it should have been. In some cases, information that was controversial then, and seems questionable now, was insufficiently qualified or allowed to stand unchallenged,” the editors wrote.

Former NYT reporter Jayson Blair’s history of fabrication and plagiarism was first discovered in April 2003. His coverage of the coordinated sniper attacks in the Washington, D.C., metro area in October of 2002 included false information, unnamed sources and plagiarism.

In an Oct. 30, 2002 article, Blair reported that a dispute between police had impeded the interrogation of D.C. sniper suspect John Muhammad, who he claimed was about to confess, citing unnamed officials. But the claim was quickly denied by all parties involved, including lawyers who Blair falsely claimed had witnessed the investigation.

Blair reported on an alleged videotape of a second D.C. sniper suspect, Lee Malvo, being questioned by police in a March 3, 2003 article. He once again cited unnamed officials, but it was revealed that no such tape existed and other details in the article had also been fabricated.

The NYT conducted an internal review and published an “unprecedented” front-page story May 11, 2003, noting that they reviewed 73 articles Blair wrote between October 2002 and May 2003 and concluded that several contained “falsification, plagiarism and similar problems.” The outlet described the matter as “a low point in the 152-year history of the newspaper.” Blair resigned from his position that month.

The NYT and other corporate media outlets pushed a narrative in 2020 claiming that former President Donald Trump ordered police to clear out protesters near Lafayette Park in Washington, D.C., during a Black Lives Matter demonstration in order to let him pose for a photo-op. 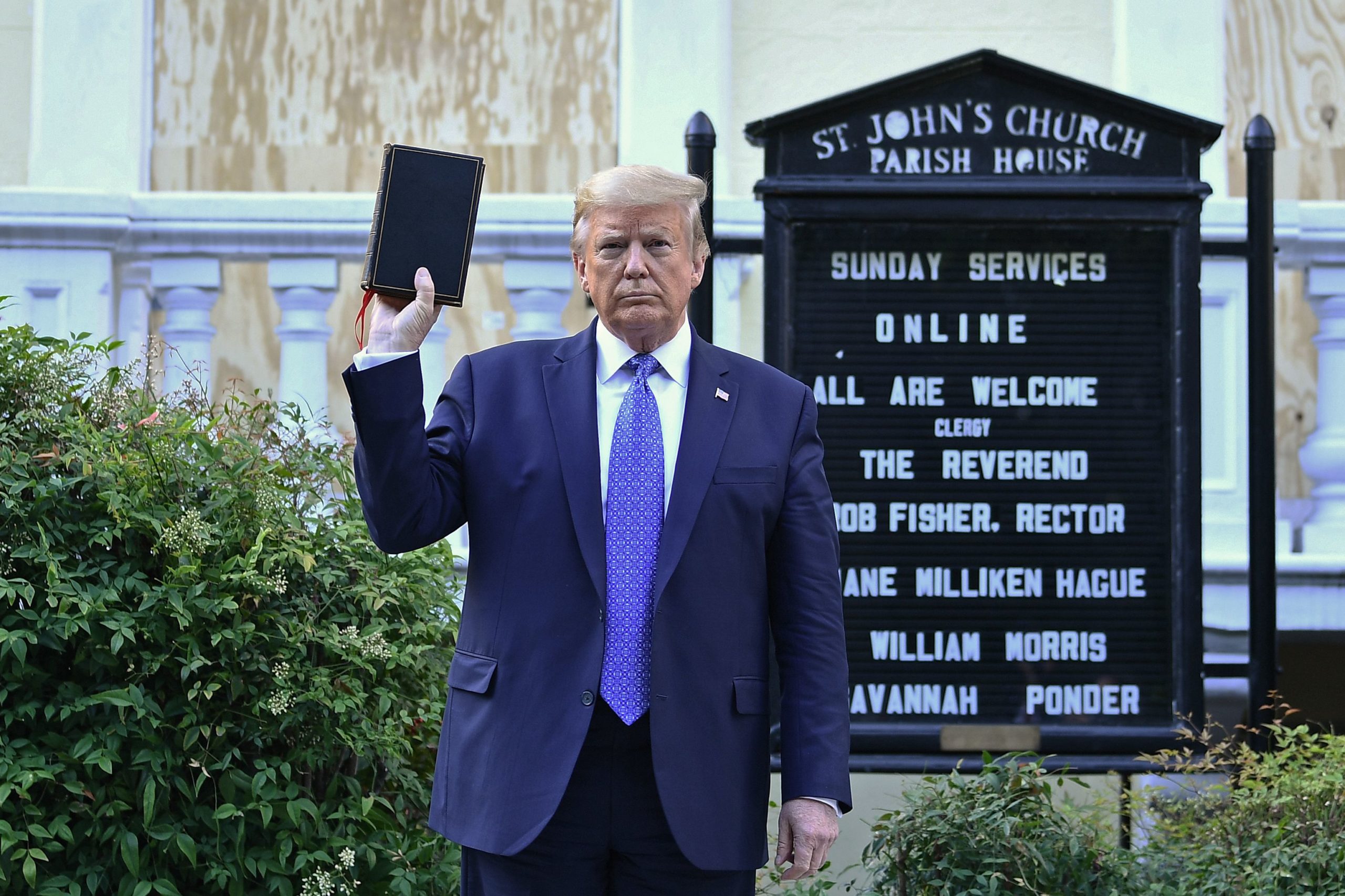 President Donald Trump holds up a Bible outside of St John’s Episcopal church across Lafayette Park in Washington, DC on June 1, 2020 (Brendan Smialowski/AFP via Getty Images)

In its coverage of the matter, the NYT cited an “official familiar with the events” who said Trump’s advisers “hatched a plan” to have him visit the nearby St. John’s Church. “It was because the president, who spent part of the weekend in a secure bunker as protests roiled, wanted to have his picture taken holding a Bible at a battered church just beyond the gates,” the outlet reported.

But a June report by Interior Department inspector Mark Greenblatt concluded that Trump was not involved in the decision to clear the protesters. The report noted that Park Police were given permission to and carried out the clearing around two days before the president had planned to visit the church. (RELATED: Eight Anti-Trump Narratives The Media Finally Had To Admit Were False All Along)

6. A Random Canadian Man Was An ISIS Executioner

The NYT released an award-winning narrative podcast series titled “Caliphate” in 2018 about the Islamic State terrorist group and its operations. The series, created by the outlet’s star terrorism reporter Rukmini Callimachi, included a confessional interview of a Canadian man of Pakistani origin who claimed to have been an ISIS executioner.

The man, who called himself Abu Huzayfah, was arrested after the podcasts aired by the RCMP in Canada on Sept. 25, 2018. Authorities discovered his real name was Shehroze Chaudhry and his account of supposed terrorist activities was fabricated.

In an internal review, the NYT determined the highly successful podcast series did not meet the paper’s standards and was the result of widespread institutional failings such as a lack of senior editorial oversight. The outlet ultimately retracted the podcast in December of 2020 and continued restructuring efforts into 2021.

A June 2020 NYT report claimed Trump had received intelligence that a Russian military spy unit was paying Taliban forces a “bounty” to attack U.S. service members in Afghanistan. The report suggested there was a consensus in the intelligence community regarding the veracity of the information. 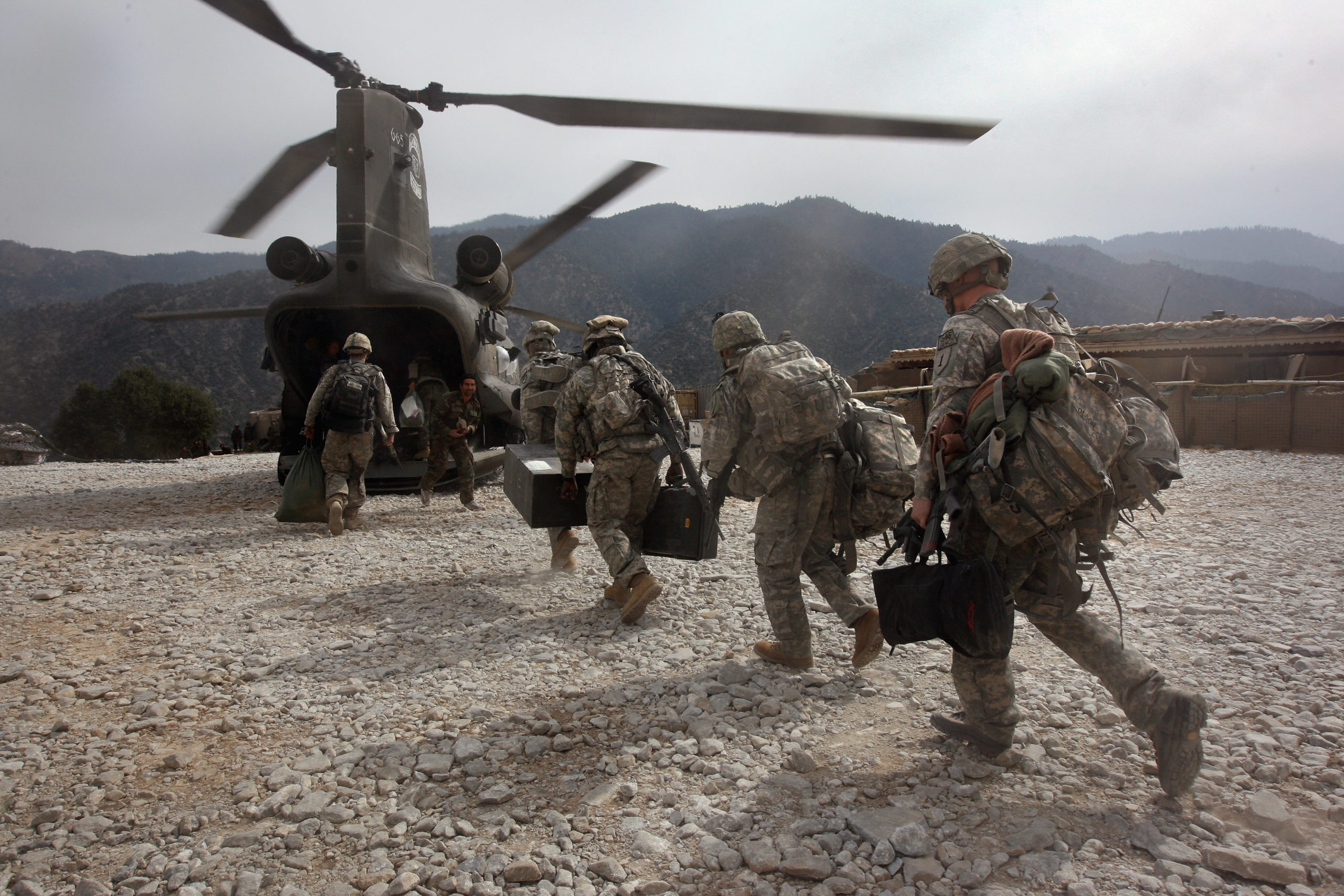 U.S. soldiers board an Army Chinook transport helicopter after it brought fresh soldiers and supplies to the Korengal Outpost on October 27, 2008 in the Korengal Valley, Afghanistan (John Moore/Getty Images)

Trump dismissed the reporting, which cited unnamed “officials briefed on the matter” as its sources. Top U.S. officials later corroborated the former president’s claims that there was no evidence he was briefed about the bounties. Then-Defense Secretary Mark Esper similarly denied getting briefed about the situation, NPR reported.

The veracity of the intelligence was also called into question after Gen. Frank McKenzie, commander of the U.S. Central Command, told NBC News that the information “had not been proved to a level of certainty.” The Biden administration noted months later in April it has only “low to medium” confidence that Russia placed the bounties.

The NYT published a follow-up report several days later, replacing its definitive statements about Trump being directly briefed about the alleged bounties with more nuanced reporting on White House briefings and U.S. intelligence related to Russia. Although the thrust of the original Times story had been disproven, they did not issue a correction.

The NYT published an article Jan. 8 that originally claimed Capitol Police officer Brian Sicknick died after he “was struck with a fire extinguisher” amid the chaos of the Jan. 6 riot at the U.S. Capitol. The article cited “two law enforcement officials,” although the Capitol Police did not note this in their statement and only said Sicknick “was injured while physically engaging with protestors.”

It was later revealed that Sicknick died from natural causes, suffering from two strokes following the Capitol riot. Medical examiner Francisco Diaz said an autopsy showed no evidence Sicknick suffered from any internal or external injuries, nor that he had an allergic reaction to chemical irritants that were dispersed during the riot, The Washington Post reported. 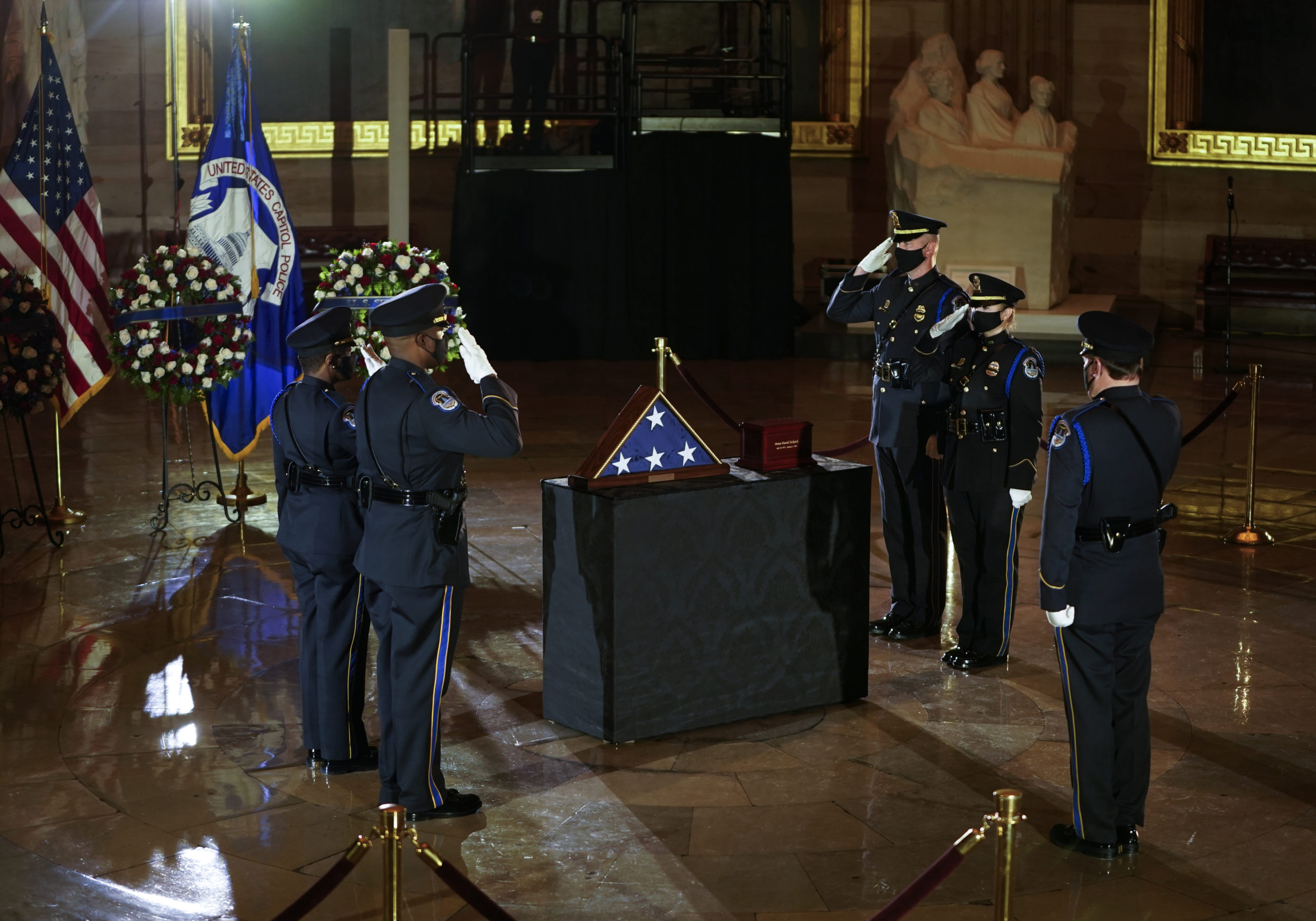 Capitol Police officers change who is guarding the remains before a ceremony memorializing U.S. Capitol Police Officer Brian D. Sicknick, 42, as he lies in honor in the Rotunda of the Capitol on Wednesday, February 3, 2021 in Washington DC (Demetrius Freeman- Pool/Getty Images)

The NYT quietly updated its article in February to note “new information has emerged” regarding the officer’s death, though the outlet did not explicitly correct the article’s original claim and no editor’s note was included in the follow-up piece.

The NYT editorial board published, and later corrected, an editorial in June 2017 that linked an ad for one of former Republican Alaska Gov. Sarah Palin’s political action committees (PAC) to the 2011 shooting of former Democratic Arizona Rep. Gabby Giffords.

Jared Lee Loughner opened fire in a supermarket parking lot in January 2011, killing six people and injuring 15 others, including Giffords. The NYT editorial board wrote that “the link to political incitement was clear” because Palin’s PAC had circulated a map of targeted electoral districts for future elections, which included Arizona’s eighth congressional district.

Multiple fact checks, including by PolitiFact and The Washington Post, labeled the claim as “false” and concluded there was no evidence to suggest the map of targeted electoral districts circulated by the PAC inspired Loughner to carry out the shooting. Palin filed a lawsuit one week later alleging that the “fabricated story” amounted to defamation.

The NYT issued a correction admitting that the original editorial “incorrectly stated” there was a link between the Palin’s PAC and the shooting of Giffords when, “in fact, no such link was established.”

We’re sorry about this and we appreciate that our readers called us on the mistake. We’ve corrected the editorial. https://t.co/t1FZ3iEYQJ pic.twitter.com/k7WW5uJIQO

The NYT published an article in February of 2020 that blamed Republicans like Sen. Tom Cotton of Arkansas for “lending credence to what has been largely considered a fringe theory,” after lawmakers raised the possibility that COVID-19 originated in a biochemical lab in Wuhan, China.

The article noted at the time that health experts “generally dismiss” the theory that COVID-19 leaked from the Wuhan Institute of Virology and said Cotton’s comments about the lab leak theory “echoed the anti-Communist thinking of the Cold War era.” The article later blamed “right-wing media outlets” for giving “conspiracy theories a boost.”

But the lab leak theory gained prominence earlier this year as more research into the matter was published. Even White House chief medical adviser Anthony Fauci told PolitiFact in May he was “not convinced” when asked if he was “still confident that [COVID-19] developed naturally.”

More than a year after its initial article, the NYT reported in May that a growing number of scientists are calling for an open investigation into the origins of COVID-19. The article noted that evidence in either direction “leaves theories of natural spillover and laboratory leak both viable.”