Republicans vowed for weeks to oppose a debt ceiling increase and urged Democrats to put the provision in their filibuster-proof $3.5 trillion reconciliation bill. But Democrats have thus far refused to do so, and with their bill’s failure Monday, Congress now has just three days to pass a new funding bill to avoid a government shutdown set to begin Friday at midnight.

Speaking on the Senate floor ahead of the 48-50 vote, Majority Leader Chuck Schumer lambasted Republicans and alleged that they were throwing the country “toward unnecessarily, avoidable disaster.” Schumer changed his vote to “no” at the last second, allowing him to bring the funding bill back up at a later date.

“If Republicans follow through w/their plans to vote ‘no,’ they will be on record to deliberately sabotaging our country’s ability to pay the bills & likely causing the first ever default in American history,” he said. “By blocking an extension of the debt limit, Republicans will solidify themselves for a long time as the party of default.” (RELATED: Congress Barrels Toward Debt Ceiling Catastrophe As Dems, GOP Dig In) 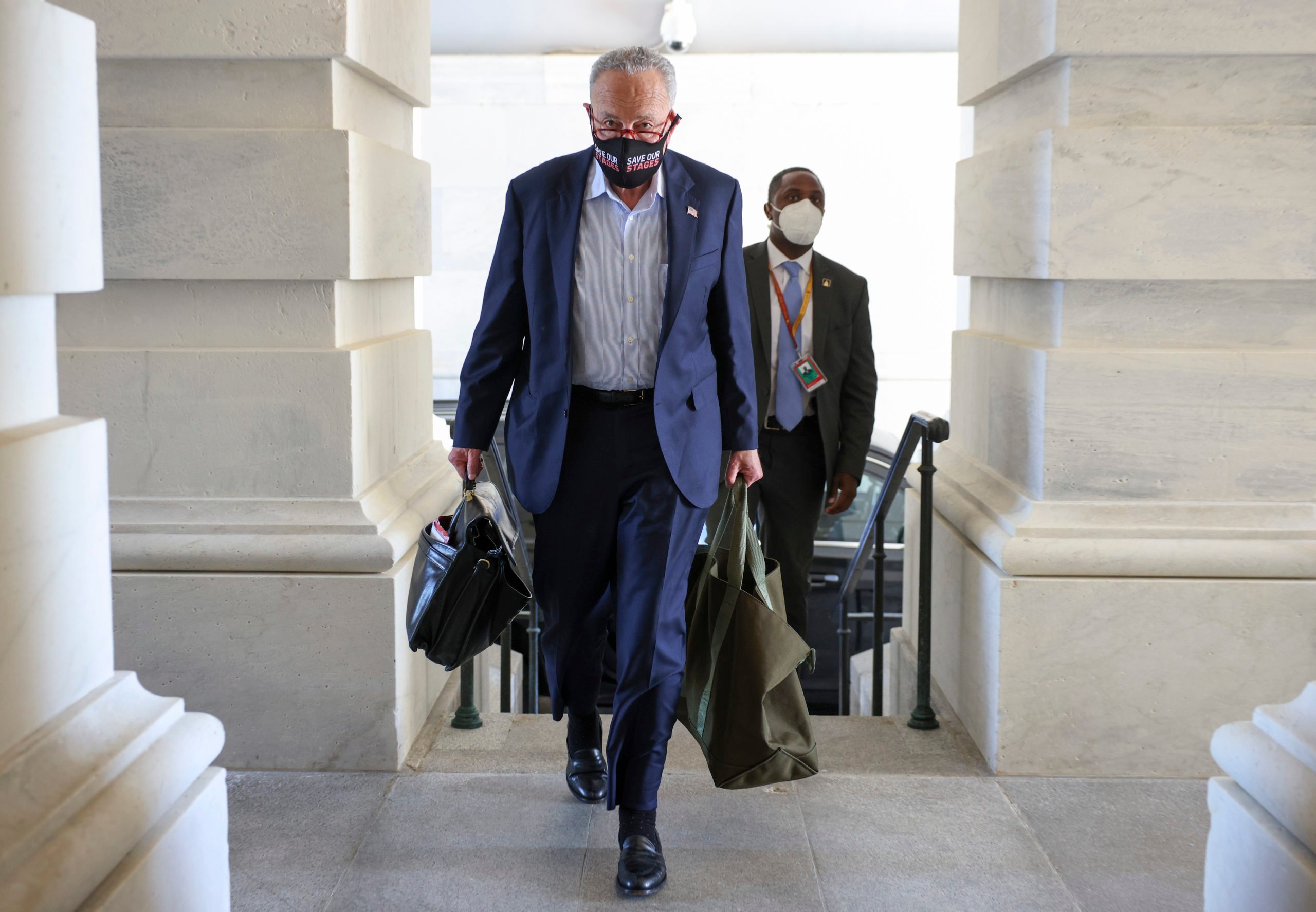 Majority Leader Chuck Schumer arrives at the Capitol on Monday. He and House Speaker Nancy Pelosi are trying to guide a funding bill, budget and infrastructure package through a bitterly divided Congress before Friday, when a shutdown is set to go into effect. (Kevin Dietsch/Getty Images)

Minority Leader Mitch McConnell, however, put the blame on Democrats, saying that they knew what the end result would be and that they could easily pass a government funding bill with overwhelming bipartisan support and avoid a shutdown.

“We will support a clean, continuing resolution that will prevent a government shutdown, get disaster relief to Louisiana, help properly vetted Afghan refugees who put themselves on the line for America and support the Iron Dome assistance for our ally Israel,” McConnell said. “We will not provide Republican votes for raising the debt limit.” (RELATED: ‘Our Most Reliable Ally’: Iron Dome Funding Sails Through The House)

Republicans’ objections stem from the Democrats’ budget itself. If they have the power to and are planning on pushing it through Congress without GOP input, they argue, then they should be responsible for raising the limit on their own. Most estimates say it must be raised before mid to late October in order to avoid a default.

“Bipartisanship is not a light switch, a light switch that Democrats can flip on when they need to borrow money, and switch off when the want to spend money,” McConnell added. “The debt suspension that expired in August covered all the debt that had been accumulated to that point. This is an argument about the future.”

While McConnell and Alabama Sen. Richard Shelby, the top Republican on the Senate Appropriations Committee, released their own funding bill last week, Democrats rejected a procedural move to substitute it for their own bill. Now, the House and Senate must each pass a new funding bill before Friday, adding to a historically high-stakes week where Democrats hope to pass both their budget and the infrastructure bill.