President Joe Biden’s wide-ranging vaccine mandate will affect tens of millions of U.S. workers, but experts, labor unions and business groups are divided on what impact the rule will have.

While experts disagree on whether the federal mandate, which applies to the majority of the U.S. workforce, may lead to mass resignations, the rule will at the very least disrupt workplaces nationwide, Erik Eisenmann, a partner at the national law firm Husch Blackwell, told the Daily Caller News Foundation.

“I think one of the effects that you will see over the next month, as more and more businesses roll out mandates is that there’s going to be a shrinking population that are still objecting,” Eisenmann said in an interview. “I’m probably bearish on the idea that you’re going to have mass resignations that are going to be disruptive.”

“I think the primary disruption is going to be the employee relations issue in the meantime and how that’s going to affect workplace morale,” he continued. (RELATED: ANALYSIS: Biden’s Vaccine Mandate Hurts Working Class America The Most) 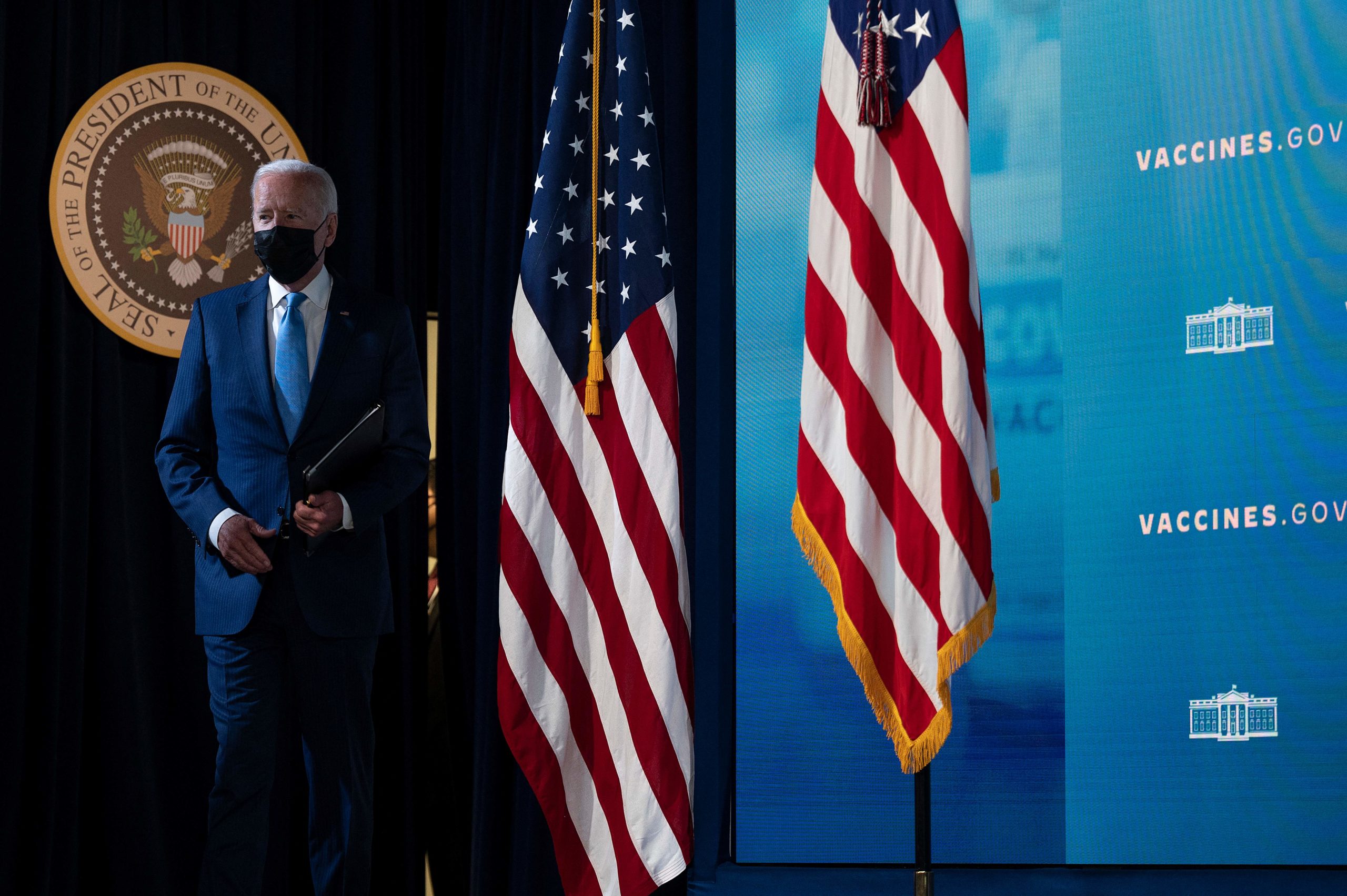 President Joe Biden arrives to deliver remarks on the COVID-19 response and the vaccination program on Aug. 23 at the White House. (Jim Watson/AFP via Getty Images)

On Sept. 9, Biden authorized the Occupational Safety and Health Administration (OSHA) to craft a rule requiring businesses with more than 100 employees to mandate workers to either get a COVID-19 vaccine or submit weekly tests proving they aren’t infected with the virus. It is unclear if the rule, which hasn’t yet been published, will include a requirement that employers pay for the weekly tests.

More than 80 million Americans, or over half of the U.S. working population, work for a business that has more than 100 employees, according to Bureau of Labor Statistics data.

Eisenmann, who primarily represents employers on labor and employment issues, added that Biden’s order may have the effect of helping businesses who wanted to issue a vaccine mandate, but didn’t, fearing workers would leave for a different job. Because of its breadth, the rule evens the playing field and limits the options for workers seeking to quit, he said.

Several labor unions, however, have forcefully condemned vaccine mandates, which they said stripped workers of their civil liberties. Many have warned of major consequences including potential mass resignations.

“Any staffing shortage, especially during a pandemic, is a threat to the health and safety of both students and personnel,” Mark Cannizzaro, president of New York City’s largest union representing school administrators and principals, said in a statement Thursday.

“It is dangerous and irresponsible for the city to move forward with its plan to allow schools and centers to operate so severely understaffed,” he continued. “As a result, we are calling on the city to delay the deadline for the mandate to allow the city to develop a reasonable contingency plan.”

In July, Mayor Bill de Blasio issued a vaccine mandate for all 400,000 public employees. Several unions quickly criticized the mandate and the New York Police Department’s largest union even threatened to sue. (RELATED: ‘See You In Court’: Republican States Say They Are Reviewing All Legal Options On Biden Vaccine Mandate)

“Mandates are not acceptable. People should have a choice,” New York City Fire Department Emergency Medical Service Union President Oren Barzilay told the DCNF. “There are still many unknowns about this vaccine. The government is simply doubling down so they don’t lose face with their agenda.”

Barzilay added that many members of his union were prepared to quit if there was no testing option to the New York City mandate. 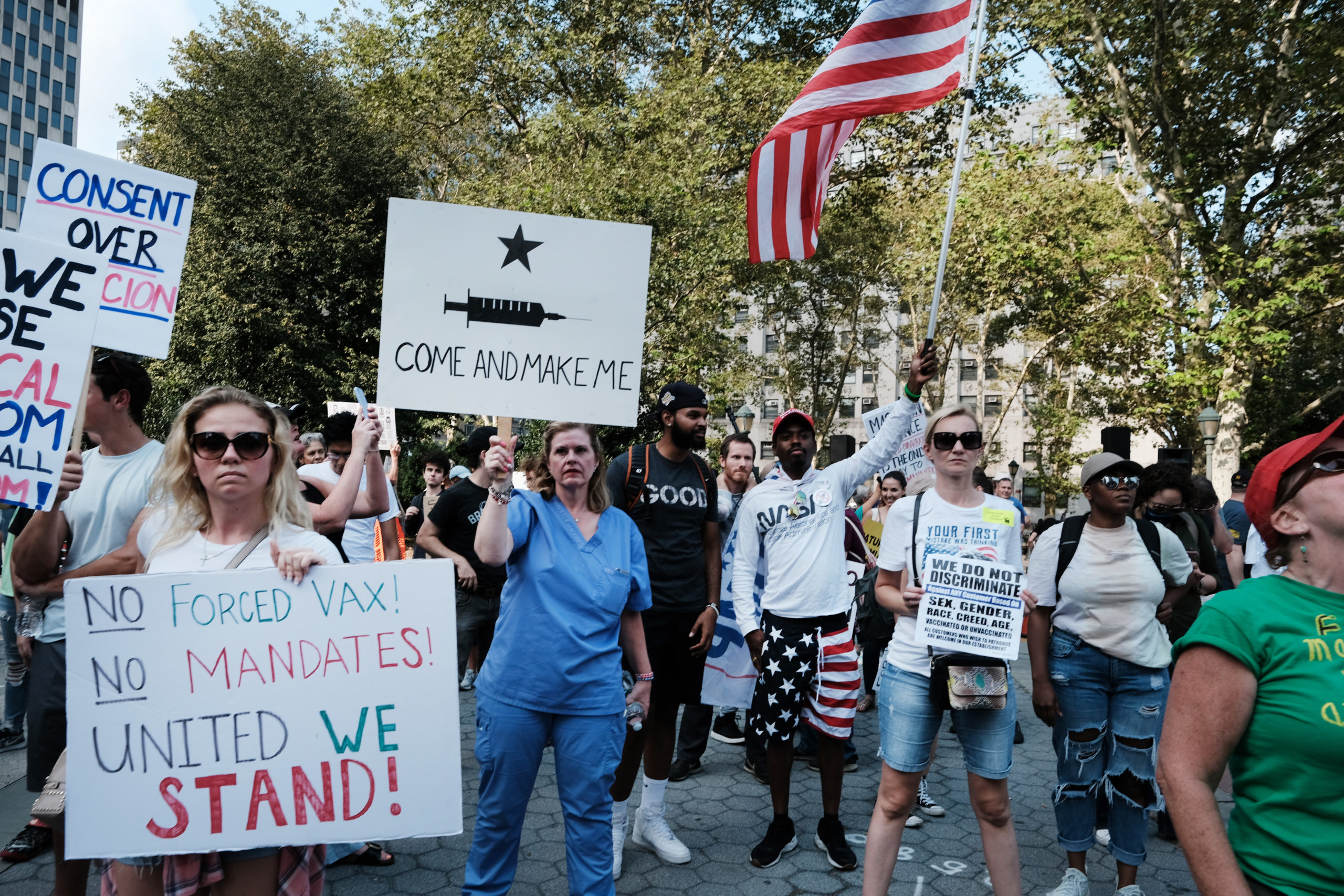 People participate in a rally and march against COVID-19 vaccine mandates on Sept. 13 in New York City. (Spencer Platt/Getty Images)

In San Diego, roughly 45% of police officers said they would prefer to be fired than comply with a city mandate to receive a vaccine, according to a San Diego Police Officers Association internal survey, the ABC affiliate KGTV reported. The Portland police union said it opposed a vaccine mandate, citing potential resignations.

But the American Federation of Labor and Congress of Industrial Organizations (AFL-CIO), a federation of 55 unions and 12.5 million total members, applauded the national mandate announced by Biden.

“The resurgence of COVID-19 requires swift and immediate action, and we commend President Biden for taking additional steps to help put an end to this crisis,” AFL-CIO President Liz Shuler said in a statement on Sept. 10. “Everyone should be vaccinated—as one step in stopping the pandemic.”

Many labor unions nationwide have also reached agreements with officials on the terms for local mandates.

Others, like the American Postal Workers Union (APWU), wouldn’t speculate on the national mandate until they examined the published OSHA rule. (RELATED: The States That Have Fought Back Against Biden’s Vaccine Mandate)

The union wouldn’t speculate about mass resignations, but noted that the U.S. Postal Service has been hiring, which could offset any departures, APWU spokesperson Jamie Horowitz said in a brief phone interview. 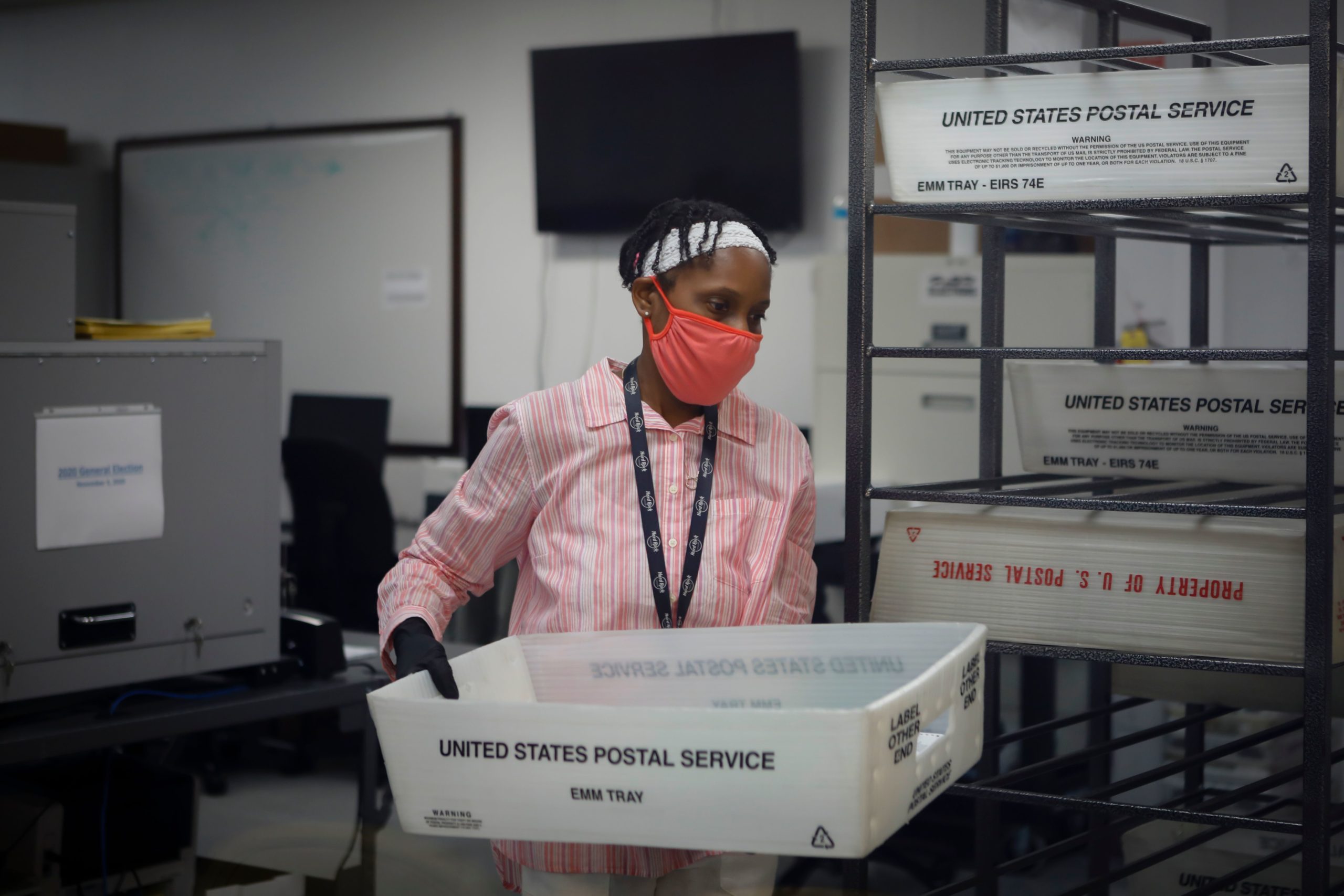 A postal worker carries a bin with election ballots in Miami, Florida on Oct. 19, 2020. (Eva Marie Uzcategui/AFP via Getty Images)

‘A decision we applaud’

“President Biden calls his plan a ‘path out of the pandemic’ but this mandate on business is a path to confusion, vastly higher costs, new liabilities, and general workplace chaos for businesses,” Small Business & Entrepreneurship Council President Karen Kerrigan said. “The restrictive one-size-fits all requirement will hamstring the flexibility business owners need – and are using – to adapt to the ever-changing nature of the pandemic and its variants.”

The National Federation of Independent Business (NFIB), the leading small business group in the country, wrote a letter to Labor Secretary Marty Walsh slamming the mandate and arguing it is likely illegal. The group said that a mandate should be implemented by Congress, not the White House.

The Job Creators Network, another association of small businesses, characterized the mandate as an “onerous regulation” and implored the administration to reverse it. The group vowed to sue the Biden administration over the mandate. 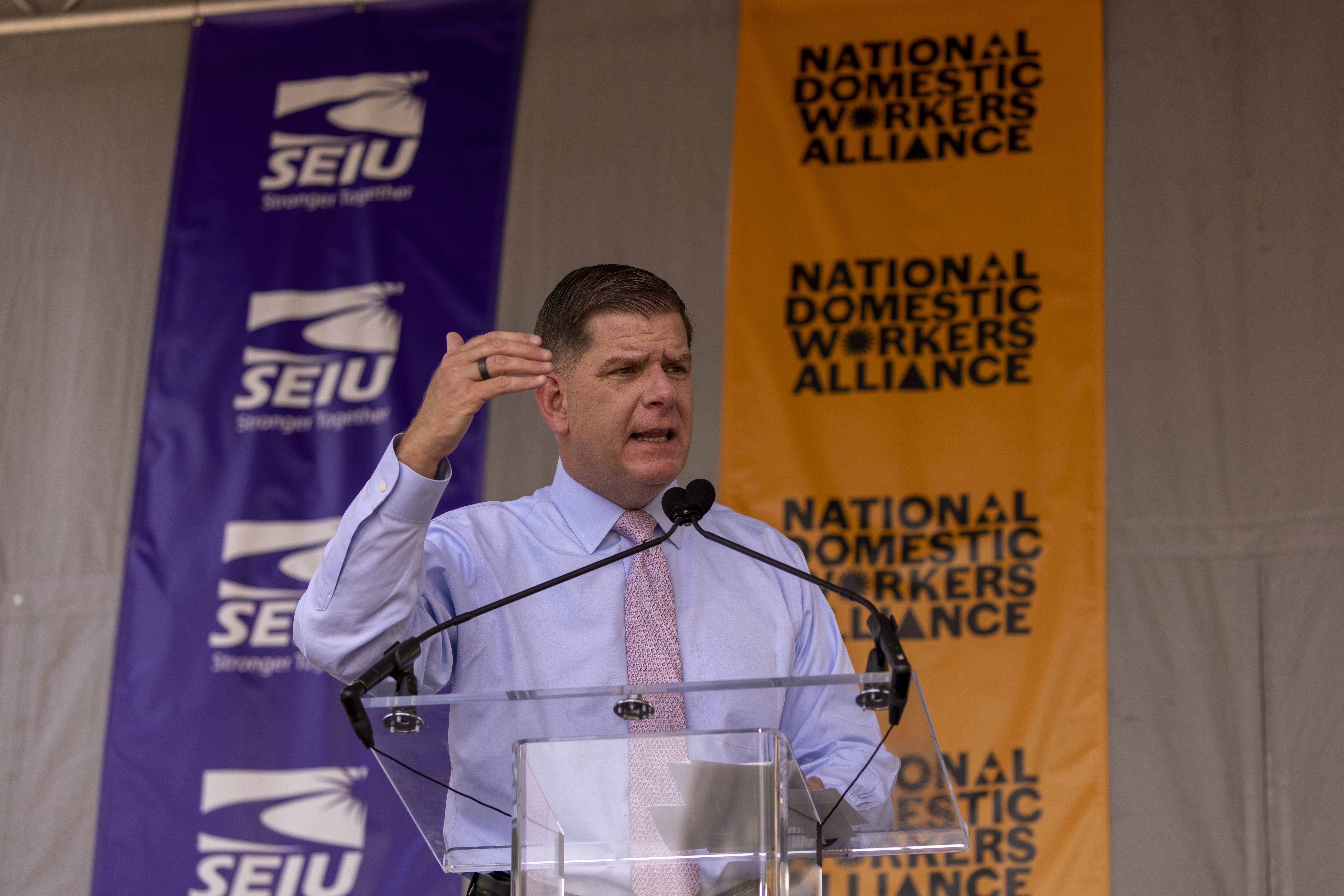 However, the Business Roundtable, a large coalition of Fortune 500 executives, applauded Biden’s mandate. The group – which includes Amazon CEO Andy Jassy, Google CEO Sundar Pichai and Apple CEO Tim Cook among others – said many of its members had already implemented the mandate.

“Business Roundtable welcomes the Biden Administration’s continued vigilance in the fight against COVID,” Business Roundtable President & CEO Joshua Bolten said in a statement. “America’s business leaders know how critical vaccination and testing are in defeating the pandemic, which is why so many have invested resources in encouraging and incentivizing their customers and employees to get vaccinated, including providing paid time off.”

“Over the past several weeks many companies have decided to implement a vaccine mandate for some or all of their employees, a decision we applaud,” Bolten continued.

The Chamber of Commerce, the largest business group in the U.S., said it would help its members follow the mandate. (RELATED: Medical Experts Are Unsure Why Biden Thinks 98% Of Americans Need To Be Vaccinated)

“The Chamber will carefully review the details of the executive orders and associated regulations and will work to ensure that employers have the resources, guidance, and flexibility necessary to ensure the safety of their employees and customers and comply with public health requirements,” a U.S. Chamber spokesperson told the Daily Caller News Foundation in a statement. 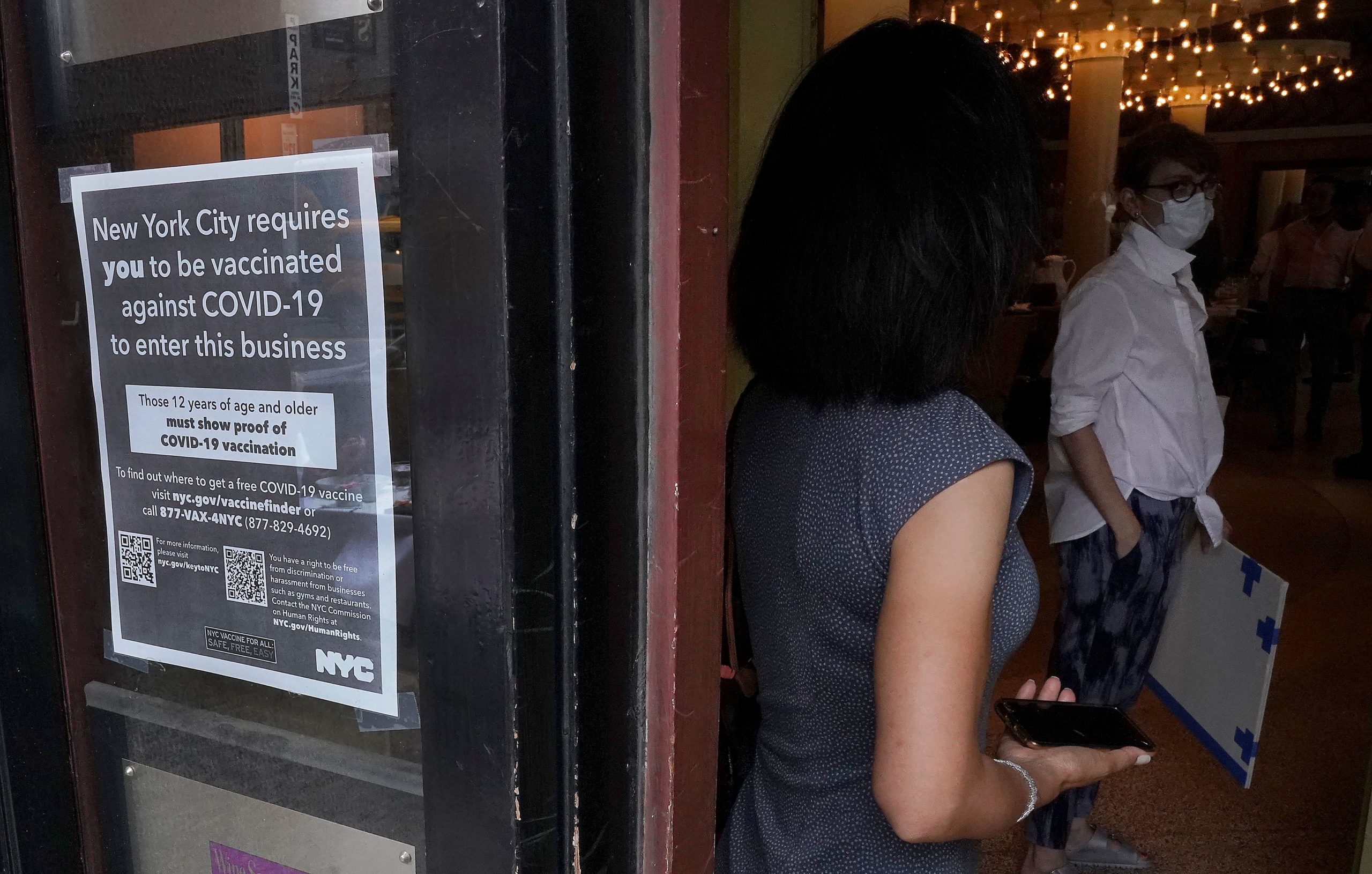 A woman waits to go in a restaurant in New York City on Aug. 17. (Timothy A. Clary/AFP via Getty Images)

A 50-50 shot at surviving a legal challenge

Employers’ main concern moving forward is navigating the peculiarities of the mandate when it goes into effect, according to Eisenmann, the labor lawyer. He questioned if OSHA would have the means to ensure businesses thoroughly investigate all employee exemption requests, for example.

“When the order gets issued, which I expect will occur in the next couple of weeks, I anticipate some lawsuits seeking injunctive relief to prevent it from going into effect,” Eisenmann told the DCNF.

“My best guess is that there’s probably about a 50% likelihood that that emergency temporary standard would survive a legal challenge and about 50% chance that it would be enjoined,” he continued. “OSHA would then have to go back to the drawing board.”

Arizona became the first state to sue the Biden administration over the mandate on Sept. 14, arguing the rule was unconstitutional since it favored illegal immigrants over American citizens. More than half of all states have threatened to sue once OSHA publishes the rule.