Nikole Hannah-Jones advocated that people should fight the “serious” threat of “fake hysteria” over critical race theory, arguing that the best way to stand up is to “just teach it” in the classrooms.

Nikole Hannah-Jones, Pulitzer Prize-winning author of the “1619 Project” and New York Times narrative journalist, was hosted virtually by Penn State University on Tuesday in a talk titled, “1619 and the Legacy that Built a Nation.” The prominent journalist dedicated much of her speech to the subject of critical race theory being taught in schools, especially since her 1619 Project is intrinsically linked to it.

In her introduction, Hannah-Jones explained why she wrote the 1619 Project, then joked that “the project of course now, is banned in America.” (RELATED: Nikole Hannah-Jones Says Her Privately Funded School Program Won’t Teach Critical Race Theory)

The New York Times journalist said she “knew that there was going to be pushback” because the argument of the 1619 Project is to “consider slavery not freedom as our origin.” She said that her goal was to show how aspects of “modern” American society “trace back kind of its history and roots in the legacy of slavery” and that “slavery can be seen in our capitalism, our democracy, our diet, everything.”

After the project launched nearly two years ago, Hannah-Jones said, “the most common pushback is that the project was to teach people to hate America and destroy America,” which she says is not true. Although proclaiming that “it’s not a journalist’s job to be patriotic,” she said that “clearly” the 1619 Project was “the most patriotic thing I have ever written, accidentally.”

Hannah-Jones also said that she believes attempts to ban the teaching of the 1619 Project and Critical Race Theory in schools were just proof that  “the 1619 Project is being used as part of an effort to stoke white resentment” following last year’s “global protests” or “so-called racial reckoning.”

“People saw it as a good political tool to create a wedge between Americans who were starting to really reflect on structural inequalities.”

She then suggested that “the protests last year were not just about police violence but about a 400-year legacy,” alluding to the impact she believed the 1619 Project played in the “racial reckoning.” In the past, Hannah-Jones tweeted that it was “an honor” a New York Post op-ed declared the demonstrations after the death of George Floyd “the 1619 Riots.”

Hannah-Jones then laid out what she believed were the motives behind people who opposed the 1619 Project and critical race theory. According to the Pulitzer Prize winner, “we can trace the rise in anti-1619 sentiment,” “the fake hysteria around critical race theory,” and “the rise of using critical race theory and the 1619 project as a propaganda tool to right around the time of the election” and when “the electoral results” were announced. “It serves a convenient part of a narrative that white Americans are losing something, that they are losing demographic primacy, that not only are these people trying to replace you demographically but that they are trying to take your history. They’re trying to take your glory and this is all part, I think, of that political moment that we’re in.”

Soon after, Hannah-Jones compared today’s social and political climate to the Redemption period, when former Confederate Democrat “redeemers” instilled racist Jim Crow laws throughout the American South following the failure of “Reconstruction” in the aftermath of the Civil War. “I think we are on the verge of another redemption period which, of course, followed the election of the first black president with the election of a white nationalist president.”

Hannah-Jones said she is “quite frightened” and that “it’s a scary time if you study history”  She chided Republicans because of their “intensive attacks on the right to vote, the “insurrection on the Capitol, efforts to overturn elections that were won by multiracial coalitions of voters, attempts to delegitimize the black vote and the threat of violence in order to keep electoral power despite being a minority which Republicans are, the minority party.”

Hannah-Jones followed up by claiming that “after the racial reckoning, this multiracial coalition has sent a very resounding message to this country, and then those votes [were] delegitimized.” She concluded by saying that Republicans were engaging in efforts “to overturn the next election, and to ensure the rule of the minority party.”

“Just teach it,” Hannah-Jones said during the audience Q&A portion of the event when asked what she thought is the best way to stand up for the 1619 Project and CRT in the classroom, as many parents across the country feel threatened by her message.

“Because these attacks are serious” and “these times require courage,” she added.

“Our democracy is at a dangerous tipping point and we’re going to have to push back and have courage because the opposition” is “trying to restrict what our children learn,” she said. Besides attacks on the 1619 Project, she claims that “folks are trying to restrict” the “teaching of an accurate history” and “the truth about our country” by falsely labeling it “critical race theory, which it is clearly not.” 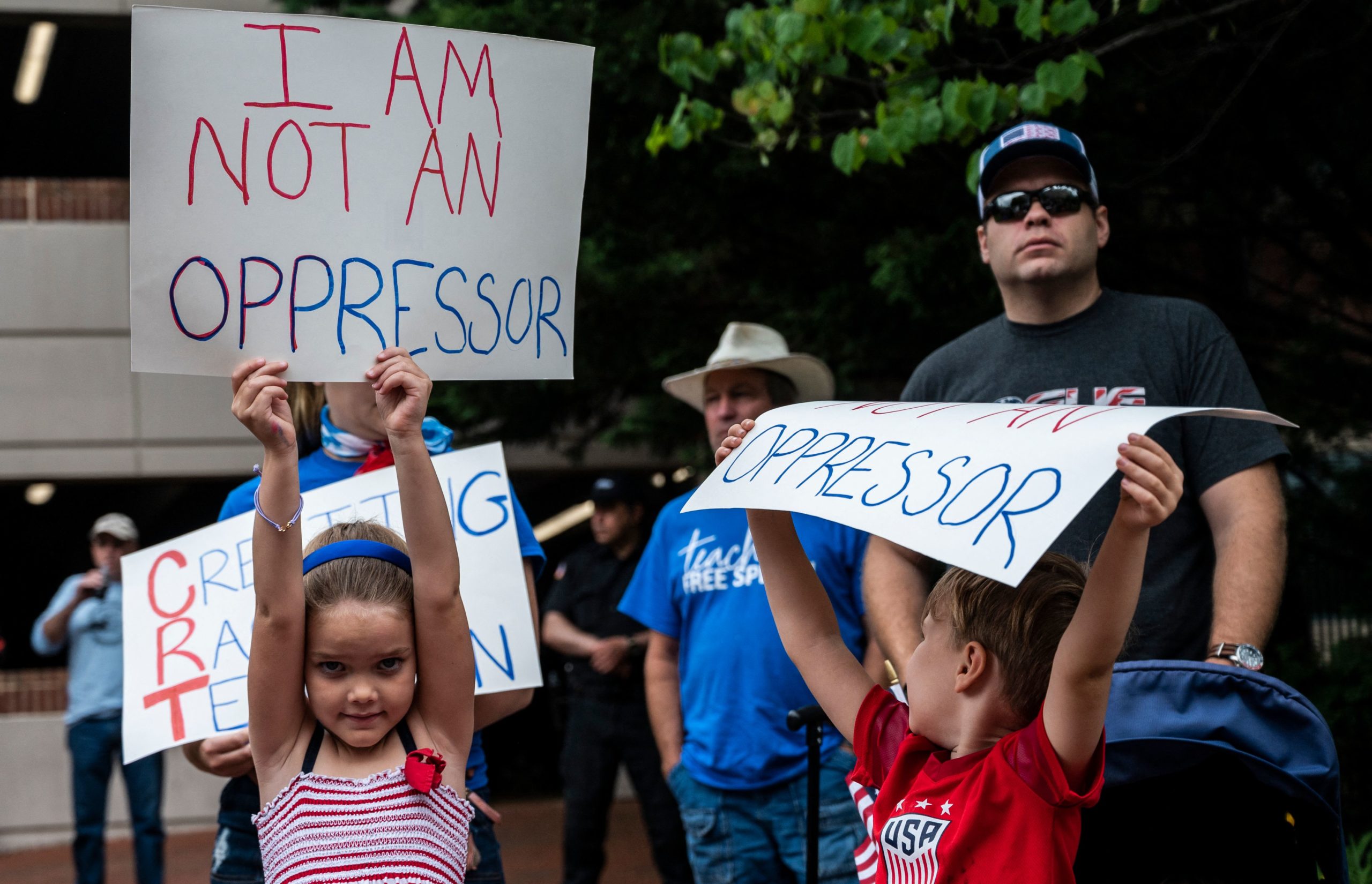 People hold up signs during a rally against “critical race theory” (CRT) being taught in schools at the Loudoun County Government center in Leesburg, Virginia on June 12, 2021. (Photo by ANDREW CABALLERO-REYNOLDS/AFP via Getty Images)

According to the acclaimed author, those opposed to critical race theory being taught in the classrooms are winning the battle because “they’re extremely organized,” “getting laws passed,” “overtaking school boards,” and “have apps where you can report your teacher if you think your teacher is teaching something that makes your kid uncomfortable.”

She then called those in favor of critical race theory “the side pushing back” and said they don’t “seem to be organized at all.” “If this is important to you, we have to have some courage.”

Hannah-Jones then shared her new “mantra”: “We all have to pick the institution and defend it because we are in dangerous times.”

“So if this is important to you, then you have to keep teaching it. When you’re challenged, you have to defend why you’re teaching it, and you have to be willing; I don’t want to say to put your career on the line, but what is the fight that you’re willing to have right now in this moment when we’re seeing attacks on free speech, reproductive rights [and] voting rights? What’s the skin we’re all willing to put in the game?

The webinar featuring Nikole Hannah-Jones was funded by Penn State’s University Park Student Initiated Fee. It was co-sponsored by the Penn State Center for Spiritual and Ethical Development and the Bellisario College of Communications. This event followed the formation of a new “Center for Racial Justice” at Penn State’s main campus, “which aims to foster research addressing critical human and social problems” while addressing “the work of the Select Penn State Presidential Commission on Racism, Bias, and Community Safety.”