A tourist has been jailed after being “dangerously close” to a grizzly bear at Yellowstone National Park.

25 year-old Samantha Dehring, an Illinois native, was visiting the park in May 2021 when she noticed a grizzly accompanied by her three cubs. While surrounding visitors backed away and reentered their vehicles, Dehring stayed, reported KTVQ News.

Witnesses took pictures and recorded videos of the incident which were distributed among media outlets and social media, leading to Dehring’s identification. (RELATED: Tourist Survives Grizzly Bear Attack In Alaska) 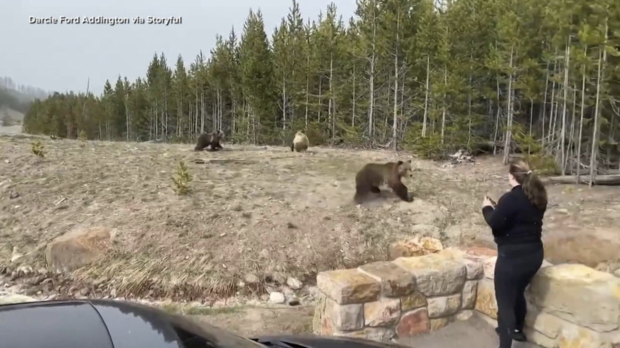 An Illinois woman, pictured near bear and her cubs , is facing federal charges for approaching wildlife at Yellowstone National Park.

Federal Judge Mark L. Carman, the judge in charge of her sentencing hearing, stated he understood Dehring’s distress after she said she had suffered emotionally as a result of social media attacks and has had to delete all of her social media accounts since the incident, KTVQ News reported.

Dehring will serve four days in the Gallatin County Detention Center and will pay a $1,000 in fine as well as another $1,000 to the Yellowstone Forever wildlife protection fund, according to the Associated Press.