The U.S. would almost certainly get involved in the conflict between China and Taiwan if the former invaded, due to the strategic necessity of a democratic, independent Taiwan, experts told the Daily Caller News Foundation.

“If push comes to shove … the basic American geostrategic considerations will require the United States to help Taiwan defend itself,” Steve Tsang, director of the School of Oriental and African Studies (SOAS) China Institute, told the DCNF.

“The entire post-war Indo-Pacific strategy would have completely collapsed,” if China took control of the island, Tsang said. “And can you imagine any U.S. government, whichever party, willing to accept that?”

A Chinese-controlled Taiwan would lead allies in the region to either make the best deal they could with China or potentially pursue nuclear weapons as a deterrent, David Sacks, a research fellow at the Council on Foreign Relations, told the DCNF. “If the U.S. were to stand on the sidelines, it would all but end the U.S. alliance system in Asia.”

“With the intensity of American discomfort with China now, it’s pretty hard to see a Congress containing the executive branch,” Tsang added. An August poll from the Chicago Council of Global Affairs showed a majority of Americans supported sending troops to defend Taiwan, should the island be invaded by China.

While experts agreed an invasion was not going to happen in the coming months, they said it will be a different story years down the line. (RELATED: Biden And Xi Jinping Agree To Hold Virtual Summit Before End Of Year)

“Xi Jinping’s goal, his headline objective, is achieving the rejuvenation of the Chinese nation. And he has said that that has to be done by the 100th anniversary of the People’s Republic of China,” Sacks said. While that deadline isn’t until 2049, he said the world needs “to prepare for a worst-case scenario.” 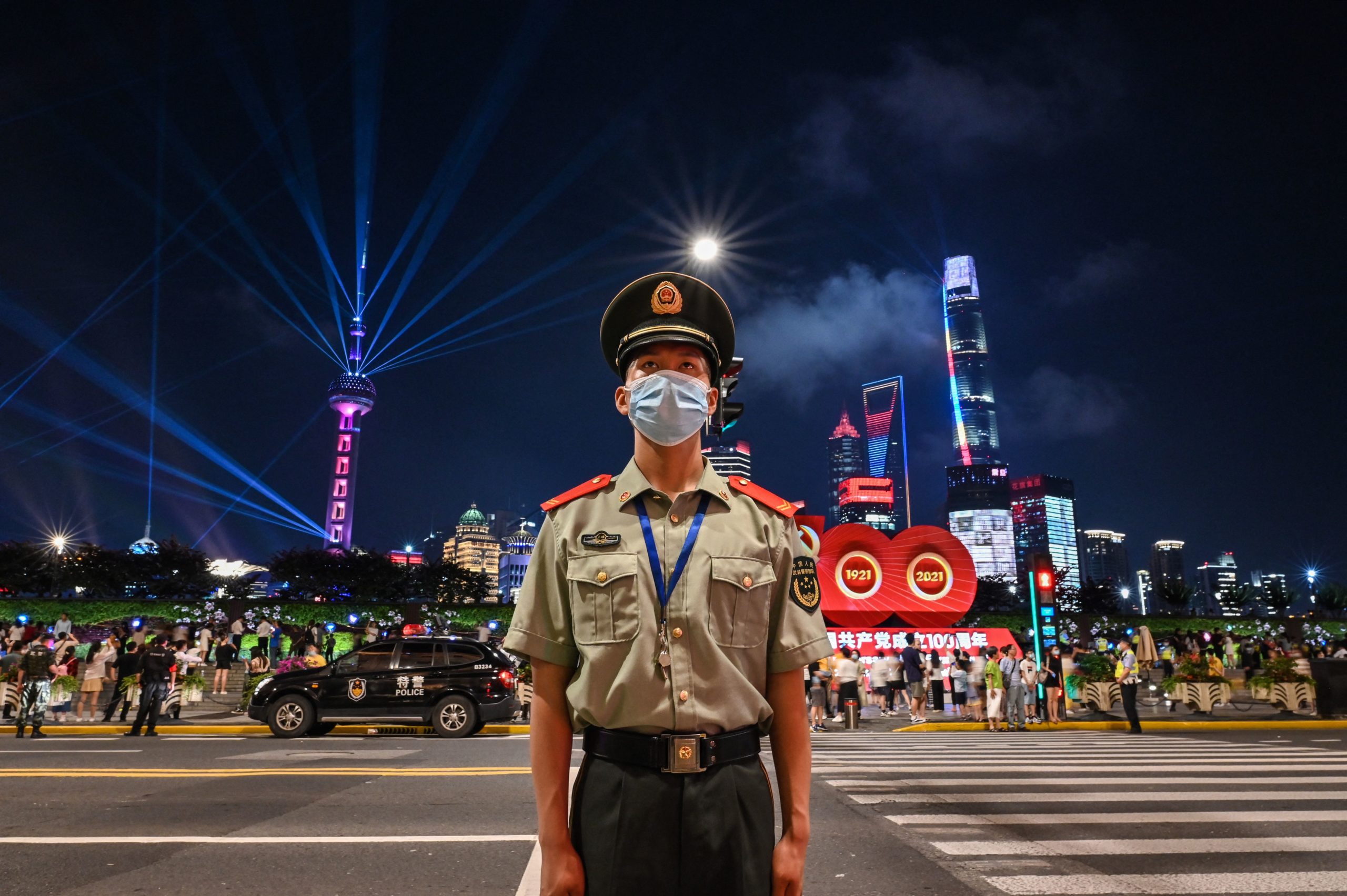 A Chinese paramilitary police stands guard while a light show is seen from the Bund in Shanghai on June 30, 2021, on the eve of the 100th anniversary of the Chinese Communist Party. (Photo by HECTOR RETAMAL/AFP via Getty Images)

“The Chinese did not always cross the midline of the Taiwan strait,” Cheng said, noting that it was only in the past few years China dared to do so. The 110-mile wide strait separates Taiwan from mainland China.

“When you have this many aircraft, and they are different types of aircraft, what that suggests is that the Chinese are sending multiple different aircraft from different bases,” he added. “That means significant coordination.”

“They are training now, in the night, as well, so they’re showing they can conduct missions over Taiwan, you know, 24 hours a day, 365 days a year,” Sacks said, adding China was practically “daring” Taiwan to retaliate with force, so it can “escalate” and then “punish Taiwan.”

The increased deployment of military aircraft creates more opportunities for mistakes and could lead to “unintended incidents” that intensify the situation, Tsang said. Sacks agreed, adding that Taiwan and China would be ill-equipped to peacefully resolve any accident that happened to occur.

Tsang said he believes the U.S. withdrawal from Afghanistan could be a reason China feels more empowered to ramp up its incursions. “For the next few years, we will still be living in the post-Afghanistan world,” he said.

“You will have a Chinese government that will go back and look at the records of the Americans from Mogadishu, to Iraq, to Syria, to Libya, to Afghanistan” he added. “Why would the Chinese government believe that the Americans will do whatever it takes and take very, very substantial casualties on behalf of a far away territory, which most Americans cannot find in a map?”

He acknowledged President Joe Biden made the right decision to leave Afghanistan but argued China will look at the collapse of the country and doubt the U.S.’s commitment to Taiwan.

“Joe Biden’s foreign policy makes our allies doubt our commitments and shows weakness to our enemies,” former Ambassador to the UN Nikki Haley told the DCNF. “Right now, Taiwan is ground zero for China’s goal of world domination. China needs to know that we stand with the people of Taiwan.”

Sacks argued that while the U.S. needs to draw lessons from Afghanistan, Taiwan’s status as a “well functioning multi-party democracy where corruption is not a major issue,” makes the U.S.’ commitment to the country stronger. 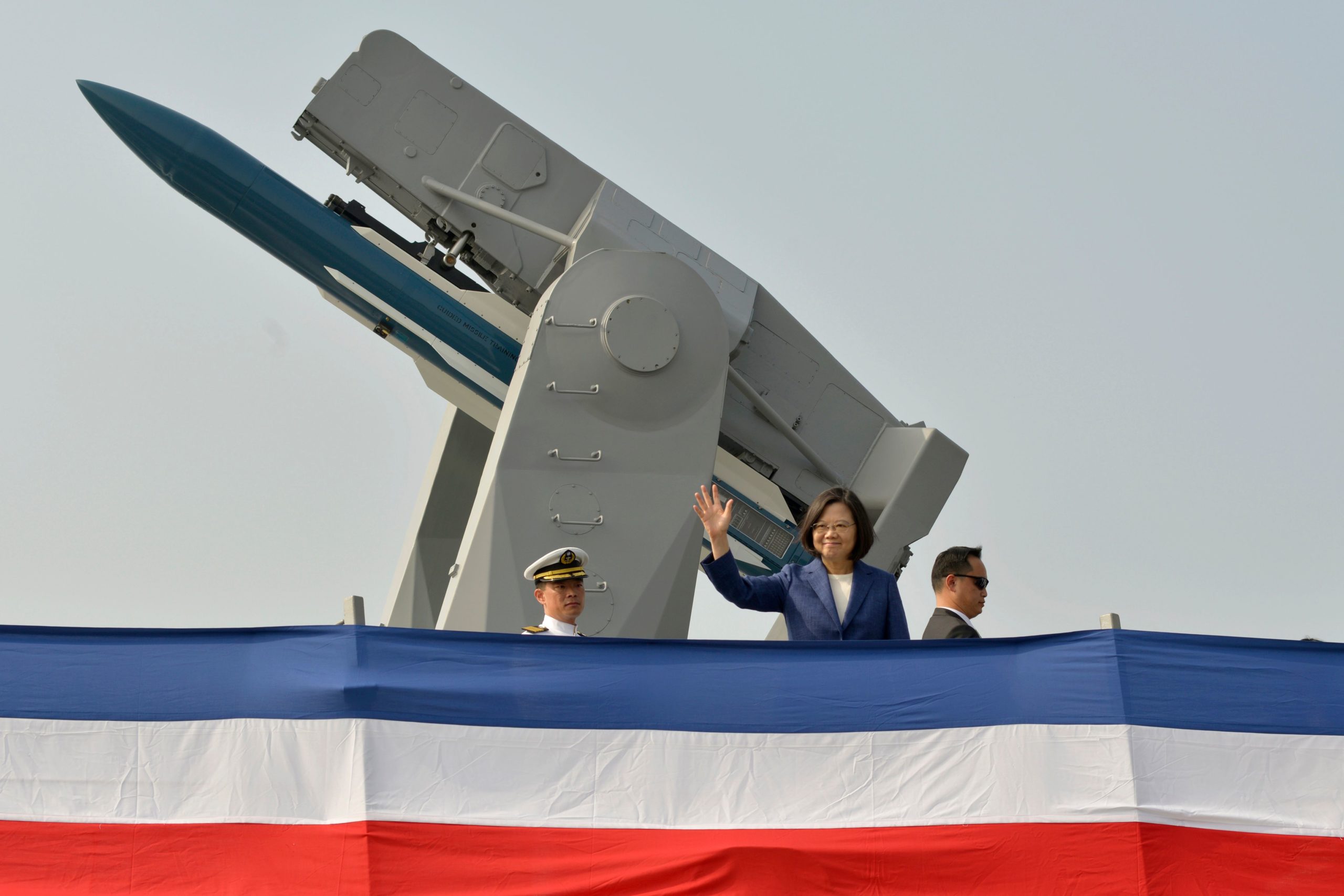 Taiwan’s President Tsai Ing-wen (C) waves to assembled guests from the deck of the ‘Ming Chuan’ frigate during a ceremony to commission two Perry-class guided missile frigates from the US into the Taiwan Navy, in the southern port of Kaohsiung on November 8, 2018. (Photo by CHRIS STOWERS/AFP via Getty Images)

While the U.S. may come to Taiwan’s aid, Tsang said major efforts need to be made to avoid a Chinese invasion in the first place. He said that the U.S. should build alliances with democracies willing to “cut off their economic ties with China, at enormous cost to themselves.”

“It means, for Europe and for North America, we will cancel Christmas,” Tsang said. “There will be no Christmas because if we stop our trade with China, our shops will be run bare for a lot of things,” but it “will be economically utterly and totally devastating to China.”

Tsang cited Australia backing out of its submarine deal with France to enter a new deal, AUKUS, with the U.S. and the United Kingdom as an example, arguing the end result could have been “achieved without pissing the French off.”

From Sacks’ perspective, military deterrence is the most crucial aspect of preventing an invasion. “I do believe that deterrence is eroding and so, therefore, it’s important for the United States to do more in terms of shifting forces to Asia, prepositioning forces and logistics in Japan, doing more to coordinate with Japan, Australia and others,” he said.

“Deterrence is not just about having the capability, but it’s about having the will,” Sacks added. “And I think that the United States should also be increasingly explicit privately to the Chinese, to begin with, that we are prepared to come to Taiwan’s defense in response to Chinese aggression.”

Cheng told the DCNF strong American leadership will be needed to mobilize the public in the event of a war with China, but was unsure Biden had the ability to do so when it would lead to “casualties on a scale much larger than we have seen in Afghanistan or even Iraq.”

“The incident at Kabul airport which killed 13 Americans would pale by comparison,” Cheng said. “That requires real leadership.”