President Joe Biden’s approval numbers have been steadily slipping in recent months, but his especially poor performance among independent voters in recent polls seems to be like a dead canary in the coal mine for the president.

In a Quinnipiac University poll released Tuesday, just 37% of total respondents said they approve of Biden’s job performance, a one-point decrease from an earlier poll on Oct. 6. But the president’s approval numbers among independents were even worse, with just 28% of independent voters saying they approve of his performance compared to 32% earlier in October.

A Grinnell College poll on Wednesday conducted by the polling firm Selzer & Company found similar results among both the general population and independents. Just 37% of all respondents said they approve of the job Biden is doing, and majorities expressed disapproval when it came to his handling of immigration and the economy.

The Selzer poll is almost identical to yesterday’s Quinnipiac poll. Which is to say, they’re both terrible for Joe Biden.

“Right now, the math is simple: a majority of Americans believe the economy will be doing worse in 12 months than it is today, and that pessimism is keeping President Biden’s approval ratings in the basement,” said Grinnell College pollster Peter Hanson.

If a presidential election were held today, both Biden and former President Donald Trump would receive 40% of the vote each among all likely voters polled by Grinnell College and Selzer & Company. But the polling data indicated Biden’s support among independents has completely collapsed. (RELATED: Joe Biden Better Hope These Polls Aren’t Wrong)

Among those polled, 45% of independent likely voters would support Trump in a hypothetical presidential contest compared to 28% who would support Biden.

“In 2020 exit polling, President Biden won independent voters by a 54% to 41% margin,” said Selzer & Company president J. Ann Selzer. “If the election were held today, our poll shows former President Trump winning that group 45% to 28%. It is a massive shift in a demographic that helped carry Biden to victory less than two years ago.”

“President Biden won independent voters by a 54% to 41% margin,” said J. Ann Selzer of Selzer & Company. “If the election were held today, our poll shows former President Trump winning that group 45% to 28%.” pic.twitter.com/LbHyj0aRPx

The 2020 results among independents might also have been a reflection of that group’s disapproval of Trump rather than expressed support for Biden. Exit polls show that Biden’s net favorability among independents was six points in November 2020 whereas Trump’s was -18 points. (RELATED: Joe Biden Is Becoming What The Media Accused Trump Of Being)

With Trump no longer in the picture, independents seem to be a lot less impressed with Biden’s record as he completes 10 months in office this week. In an NBC News poll conducted in late August, just 32% of lean independents and 38% of solid independents said Biden has accomplished a “great” or “fair deal” in office.

Washington Post columnist Henry Olsen wrote in an Oct. 4 opinion article that Biden’s considerable dip among independents is nothing short of an “epic disaster.” He noted that Republicans “are standing by” and ready to take over “a crumbling presidency” ahead of 2022 and 2024. 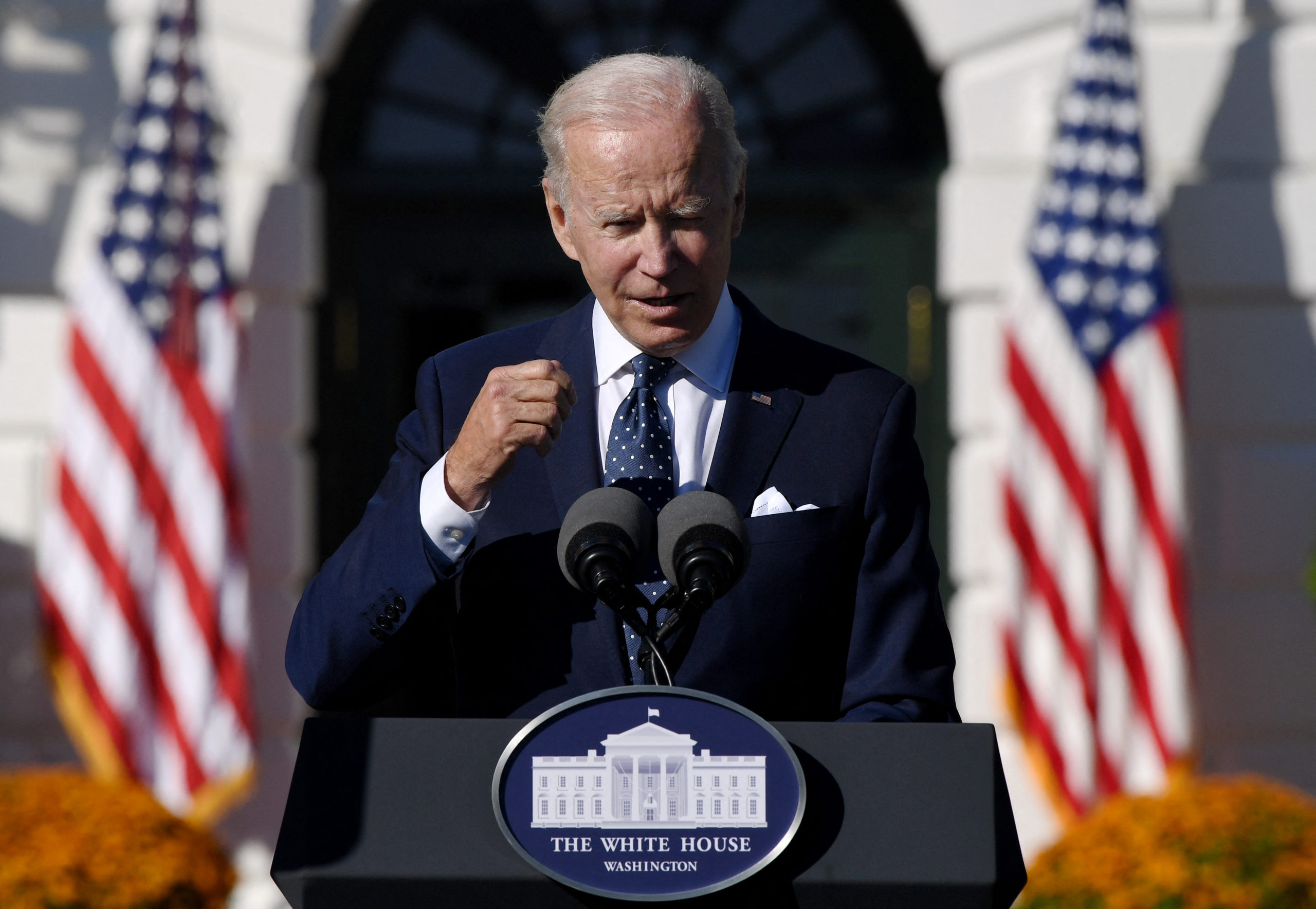 President Joe Biden speaks during an event at the White House in Washington, DC on October 18, 2021 (Olivier Douliery/AFP via Getty Images)

“Biden’s abysmal standing with independents spells disaster for Democrats in the midterm elections if it does not substantially improve,” Olsen wrote.

The biggest wave elections of the past 30 years reveal that independents can be a crucial indicator of how the political parties will favor during the midterms, CNN’s Harry Enten wrote in an Oct. 8 analysis.

Between 1992 and 1994, independents swung from favoring Democrats by eight points to voting for Republicans by 14 points, leading Republicans to control the House for the first time in over 40 years.

Biden’s approval numbers could continue to tank in the coming months as the U.S. faces issues like inflation and supply chain bottlenecks. But his poor performance among independents, in particular, could spell disaster not just for the Democratic Party in 2022 but for the president himself in 2024.