The commonwealth attorney for Loudoun County, Virginia, tried to jail a father who was charged with two misdemeanors after he uncovered that his daughter was sexually assaulted, despite campaigning to end “mass incarceration” in the area.

Commonwealth Attorney Buta Biberaj appeared in court to prosecute Scott Smith — the man whose daughter was sexually assaulted in a Loudoun County public high school bathroom — for misdemeanors. A spokeswoman for the Smith family told the Daily Caller that Biberaj attempted to lock Smith up for the misdemeanors of disorderly conduct and resisting arrest.

After facing charges of assault at one high school in Loudoun County Public Schools (LCPS), the teen was moved to a different high school under the supervision of Biberaj. Biberaj has since defended her decision stating that the teen “had no history of having done this prior to this offense that was alleged,” according to Fox 5.

Biberaj’s former assistant city attorney (ACA) accused her of “failing the people of Loudoun” to the Loudoun County Board of Supervisors, according to emails reviewed by the Daily Caller.

“The six months I worked there under Ms. Biberaj, [keeping the citizens of Loudoun safe] was not the focus,” the former ACA said. “I could give you so many examples of how that office is failing the people of Loudoun.” 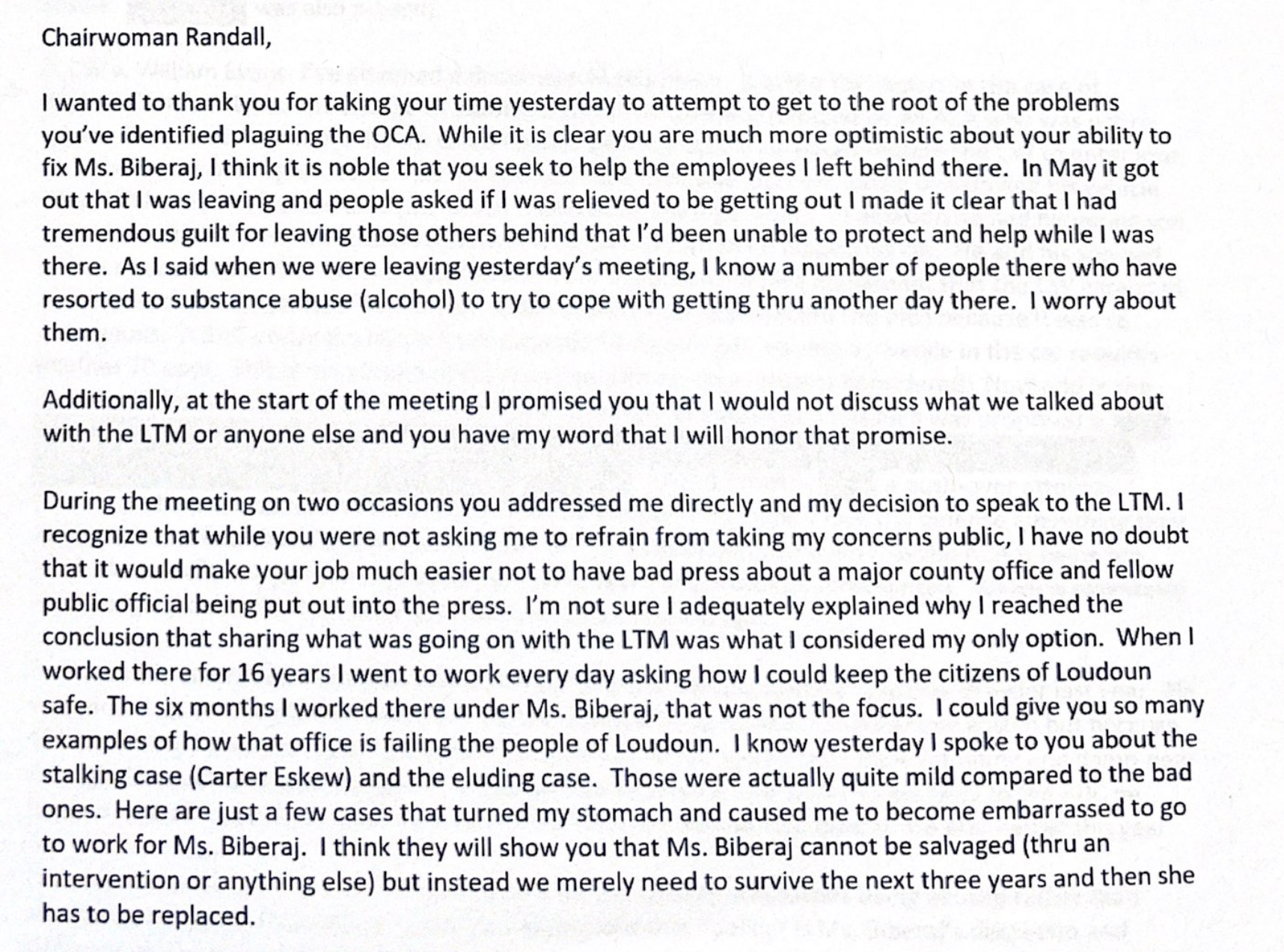 The ACA also claimed that Biberaj faced high turnover rates among her employees, with as many as 15 employees leaving within 10 months. Biberaj is facing a recall effort as well.

Biberaj has ties to far-left organizations. Per the Daily Caller’s reporting, Biberaj was elected to her position with a cash infusion from a George Soros-funded PAC. She is also a signatory member of the Virginia Progressive Prosecutors for Justice. The organization’s members pledge not to enforce any laws that they dub “anti-abortion.”

The commonwealth attorney is a friend of several of the Loudoun County school district’s board members, including Superintendent Scott Ziegler. She also remains a member of a Facebook group that compiled a list of parents they suspect of disagreeing with the district’s “anti-racist” curriculum. The Facebook group, formerly called “Anti-Racist Parents of Loudoun County,” promised to “infiltrate” concerned parents organizations and “expose these people publicly,” according to The Daily Wire.

While parents and students in Loudoun County protest the district’s handling of sexual assault and accuse the district of a cover-up, Biberaj went to the Virginia State Police insisting they investigate online threats made against her.

A Sheriff’s Office spokesman told Loudoun Now that the messages sent to Biberaj are “vulgar and disturbing,” but they “do not meet the elements of a crime under the Virginia Code.”

Buta Biberaj did not respond to the Daily Caller’s request for comment.