Legacy media’s chief concern in the wake of a juvenile rape case that has further embroiled Loudoun county schools is not the victim, nor the alleged cover up, nor even Attorney General Marrick Garland’s promise to use the FBI to spy on parents, but rather the degree to which the story may serve as a counterweight against efforts to allow biological boys into spaces previously reserved for girls.

The Daily Wire broke the news that a girl in a Loudoun County, Virginia, high school was sexually assaulted in a girl’s bathroom by a 15-year-old that identified as “gender fluid.” The Loudoun County school board has been accused of covering up the assault at the same time that efforts were underway to pass “Policy 8040,” a school policy that allows students to use bathrooms and locker rooms that align with their perceived gender identity.

According to the Loudoun County Sheriff’s Office, detectives and a school resource officer were informed of the situation on May 28.

During a juvenile court hearing, the assault victim testified that she had two consensual interactions with her abuser in the high school bathrooms. Liberal media outlets, such as the HuffPost and the New York Times, stated that “Policy 8040” had yet to pass at the time of the assault. This led the HuffPost to conclude that the “Loudoun County case appears to have absolutely nothing to do with bathroom policies based on gender identity.”

“First of all, Loudoun County does have transgender-inclusive bathroom policies in schools,” the HuffPost reads. “But they weren’t in place when the assault happened on May 28. The school board did not even approve it until Aug. 11.”

New York Times columnist Michelle Goldberg made similar claims that the girl was not a victim of transgender bathroom policies, instead, she was a “victim of relationship violence.”

“It had nothing at all to do, however, with trans bathroom policies. Instead, like many women and girls, she was a victim of relationship violence,” Goldberg wrote.

Before “Policy 8040” was officially passed, the district had a separate policy that encouraged teachers to affirm students’ gender identity in any way possible. At the time of the assault, standards were already in place for teachers to reaffirm the preferred gender identity of student.

Elicia Brand, a spokeswoman for the Smith family, whose daughter was raped, told the Daily Caller that it’s “unclear” and “concerning” why the two consensual incidents were allowed to take place. The family, like other members of Loudoun County, are fearful that such policies that encourage teachers not to question a student’s gender may lead to consensual sex on school property as well. Brand said the school board should focus less on politics and more on what parents care about — student safety and education. 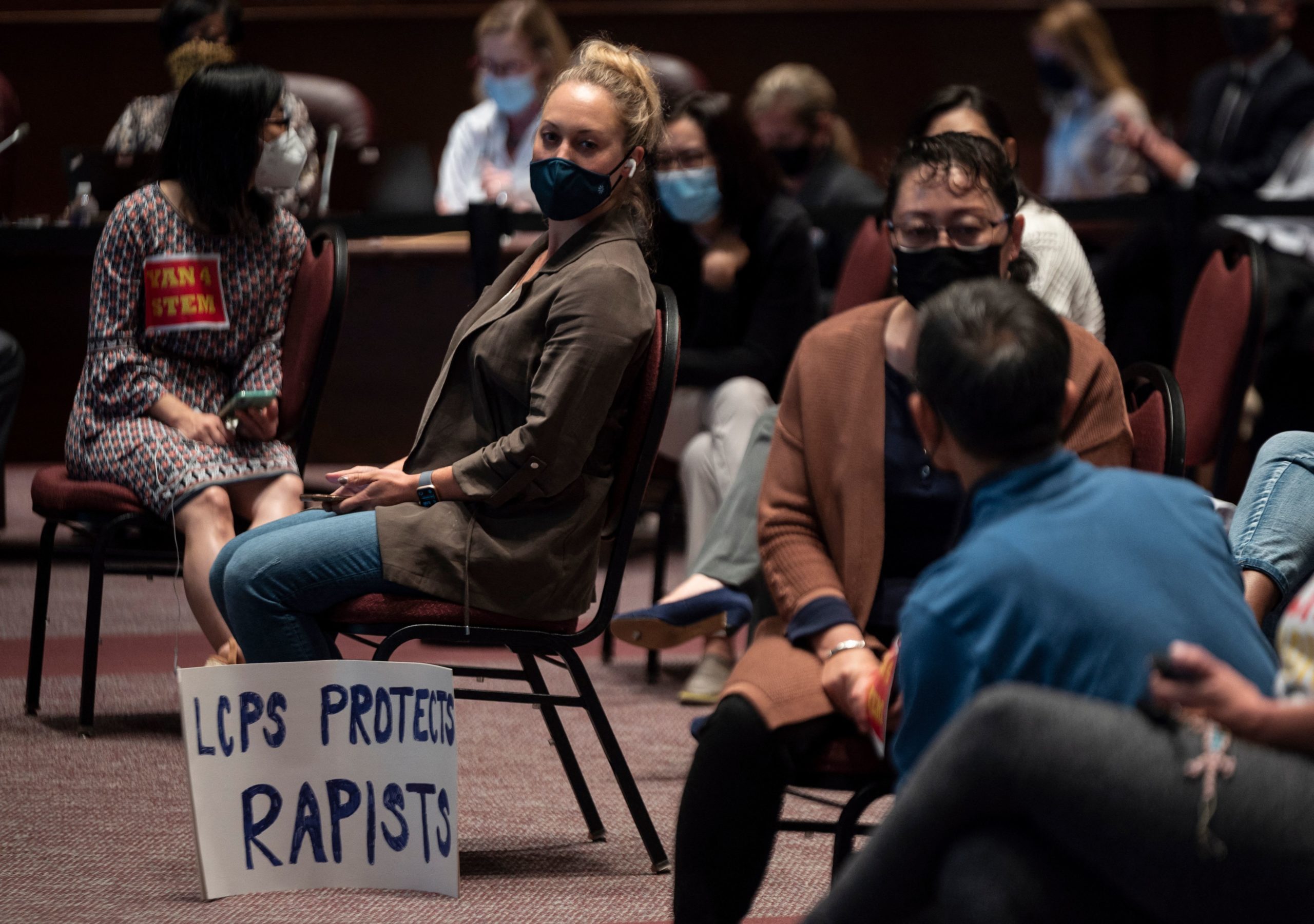 A woman sits with her sign during a Loudoun County Public Schools (LCPS) board meeting in Ashburn, Virginia on October 12, 2021. (Photo by ANDREW CABALLERO-REYNOLDS/AFP via Getty Images)

The teen accused of sexual assault was found guilty in a Loudoun County juvenile court on Oct. 26.

Goldberg, the HuffPost and the Washington Post have also pointed to comments from Commonwealth Attorney Buta Biberaj as justification for claims that the bathroom policy was not problematic.

“Biberaj told HuffPost that based on the facts that came out at the trial, gender identity was never an issue in the case,” the Huffington Post’s Amanda Terkel wrote.

However, Biberaj — like the Loudoun County school board — has ties to far-left organizations and was instrumental in moving the teen found guilty of assault from one LCPS high school to another. Brand told the Daily Caller that Biberaj tried to put Mr. Smith in jail for misdemeanors, despite her campaign pledge to end mass incarceration. (RELATED: Loudoun County Attorney Tried To Prosecute ‘Domestic Terrorist’ Parent, Despite Pledging To End Mass Incarceration)

“These articles are taking a horrific act against a student and turning it political,” said Brand.