Republican Ohio Rep. Jim Jordan ripped Democratic California Rep. Adam Schiff in a chapter of his new book on impeachment and described the day Republicans “stormed” the bunker in the Capitol, according to excerpts obtained exclusively by the Daily Caller.

The book, titled “Do What You Said You Would Do: Fighting for Freedom in the Swamp”, is set to release on Nov. 23. In chapter 11, Jordan focuses on the impeachment trial of former President Donald Trump and goes into details about the day House Republicans walked into the bunker where Schiff and House Democrats were present in order to hear the testimony and question witnesses.

“The day our colleagues ‘stormed’ the bunker to participate in the process was a moment of real significance. They didn’t really ‘storm’ it as the press has reported. They simply walked in forcefully when the door was opened. They did so because they were frustrated. Less than one-sixth of the House serves on the three committees that were conducting the deposition portion of the inquiry. Our colleagues wanted to hear the testimony, question witnesses, and represent their constituents,” Jordan explained in his book.

Jordan said both Florida Rep. Matt Gaetz and Louisiana Rep. Steve Scalise led the dozens of House Republicans down to the Intelligence Committee bunker where Schiff told them to leave.

“So, on October 23, 2019, dozens of Republican House members walked into the Intel Committee bunker to do just that. They were led by two great members of Congress, Steve Scalise and Matt Gaetz. They arrived in the room just as we were about to start the deposition. Adam Schiff asked them to leave. Several spoke up and said rather loudly, ‘We’re here to do our jobs,'” Jordan wrote. (RELATED: Group Of House Republicans Demand Pelosi ‘Immediately’ Begin Impeachment Proceedings Against Biden) 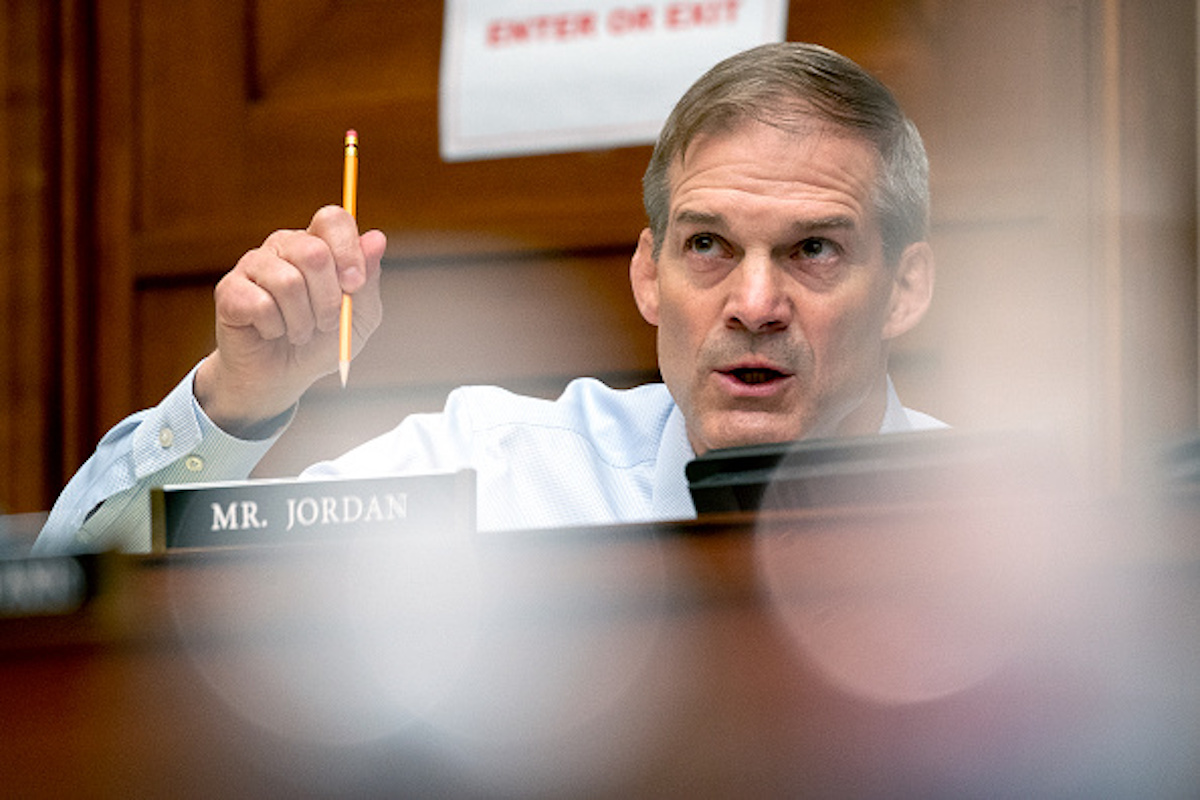 Representative Jim Jordan (R-OH) speaks during a House Select Subcommittee on the Coronavirus Crisis hearing in the Rayburn House Office Building on Capitol Hill on May 19, 2021 in Washington DC. (Photo by Stefani Reynolds-Pool/Getty Images)

“When Schiff realized they were serious, he got up and walked out. In other words, he took his ball and went home. As he walked out the door, he asked me to come down the hall to his office to discuss the situation. Mark Meadows and Scott Perry joined me. Two things from this short meeting stuck with me,” Jordan continued. (RELATED: House Votes To Send Articles Of Impeachment To The Senate, Approve Impeachment Managers)

Jordan then mentioned a moment when former North Carolina Congressman and White House Chief of Staff Mark Meadows called one of the Democratic staff attorneys a “smartass,” saying they laughed about it later and that Meadows apologized directly after. Jordan also said Schiff tried to threaten him and told him that he was responsible for the members entering the bunker. After Schiff’s remarks, Jordan said he huddled with his fellow members of Congress and told them “about Schiff’s ethics threat,” to which they said they would not be leaving.

“The first was Mark calling one of the Democrat staff attorneys a ‘smartass.’ We had a good laugh about it later, and Mark did apologize right away. The second was Schiff telling me that I was responsible for telling the members to leave, and that if they didn’t leave, there could be ethics charges filed against them. I responded, ‘I’m not the chairman. You are. I’m glad they’re here. If you want them to leave, you tell them.’ I did eventually go back and huddle with our members, and I told them about Schiff’s ethics threat. They all said, ‘Let him try to go after us. We’re not leaving,'” he added.

Jordan served as the House Oversight Committee Ranking Member and was asked by Republican leadership to serve on the House Intelligence Committee so he could participate in questioning during Trump’s impeachment.