Britney Spears lashed out at her mom Lynne Spears and her family over her conservatorship in a since-deleted post.

“The moment I smile and I realize I haven’t in a very long time,” the 39-year-old pop singer captioned her post Tuesday on Instagram before it was deleted. (RELATED: Celebrities Speak Out In Defense Of Britney Spears Following Her Plea To End Conservatorship)

“My mom gets so concerned and says, ‘you’re acting weird…whats wrong with you?'” she added. “I say, ‘Hi, my name is Britney Spears…nice to finally meet you.’ Before I go any further, forgive me in advance, it’s been 13 years and I’m a little rusty.” (RELATED: Britney Spears’ Mom ‘Inserted Herself’ Into Daughter’s Life To Get Vegas Marriage Annulled, Lawyer Says) 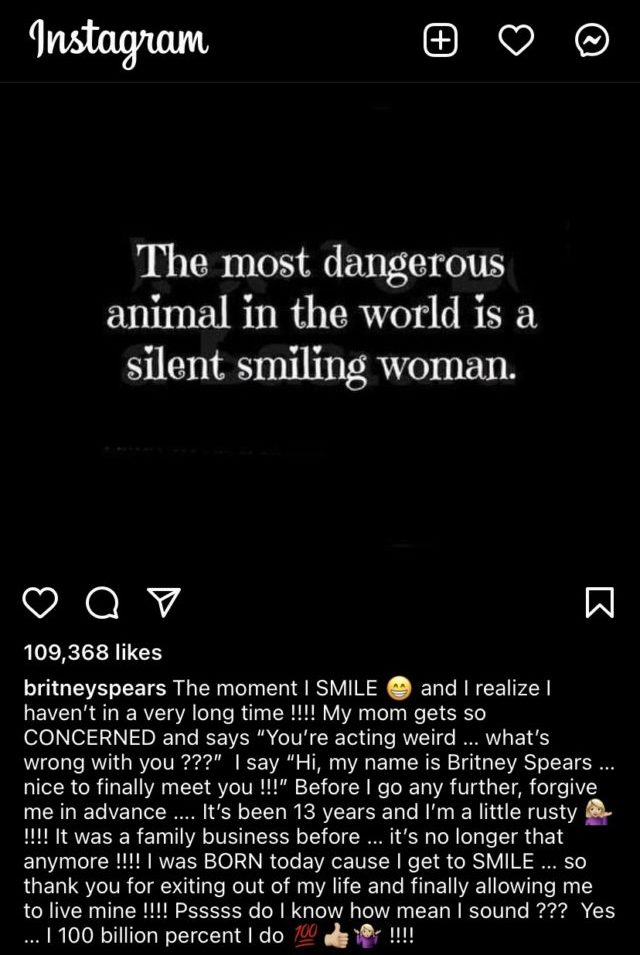 “It was a family business before…it’s no longer that anymore,” Spears continued. “I was born today cause I get to smile…so thank you for exiting out of my life and finally allowing me to live mine.”

It was unclear which family member the “Toxic” hitmaker’s above comment was directed toward. She closed out her now-deleted post by explaining how she knows “100 billion percent” how “mean” the comments “sound.”

The pop star also reportedly went further in a different post that was deleted, calling out her mom over her conservatorship and accused her of coming up with it, Newsweek reported.

“Pssss my dad may have started the conservatorship 13 years ago … but what people don’t know is is that my mom is the one who gave him the idea !!!!,” the “Gimme More” hitmaker reportedly shared on social media.

“I will never get those years back …. she secretly ruined my life … and yes I will call her and Lou Taylor out on it … so take your whole ‘I have NO IDEA what’s going on’ attitude and go f*** yourself !!!!” she reportedly added, naming her former manager, Louise Taylor.

“You know exactly what you did … my dad is not smart enough to ever think of a conservatorship … but tonight I will smile knowing I have a new life ahead of me !!!!” Spears reportedly concluded.

Page Six has since reported Britney’s mom reportedly asked that the singer’s estate pay for her legal fees in the conservatorship battle. Lynne reportedly filed a petition requesting more than $660,000 to pay her attorney’s fees and incurred costs, according to documents obtained by the outlet.

A judge removed her father, Jamie Spears, from his role of conservator of her $60 million estate after 13 years and suspended him immediately from serving in the role.

Britney has been under conservatorship since 2008 that oversaw her and her estate after she went through a public spell of mental health issues.