Expanding U.S. nuclear power — an energy source that many environmentalists and lawmakers oppose — could be the most reliable way to achieve a carbon-free electricity grid, according to experts.

Nuclear energy is considered a renewable energy source because it produces zero emissions through fission, the process of splitting uranium atoms, according to the Department of Energy. Currently, nuclear accounts for about 9% of total U.S. energy consumption, slightly less than all other renewable energy sources combined and coal, government data showed.

“If there is meant to be a serious conversation about changing the way we generate electricity in the United States, particularly with a focus on carbon emissions, nuclear has to be a part of the conversation,” American Institute for Economic Research senior faculty Ryan Yonk told the Daily Caller News Foundation.

President Joe Biden said in April that the U.S. would have a completely carbon-free electric grid by 2035. Reducing total economy-wide emissions 50% by 2030 and 100% by 2050 are among his other goals. 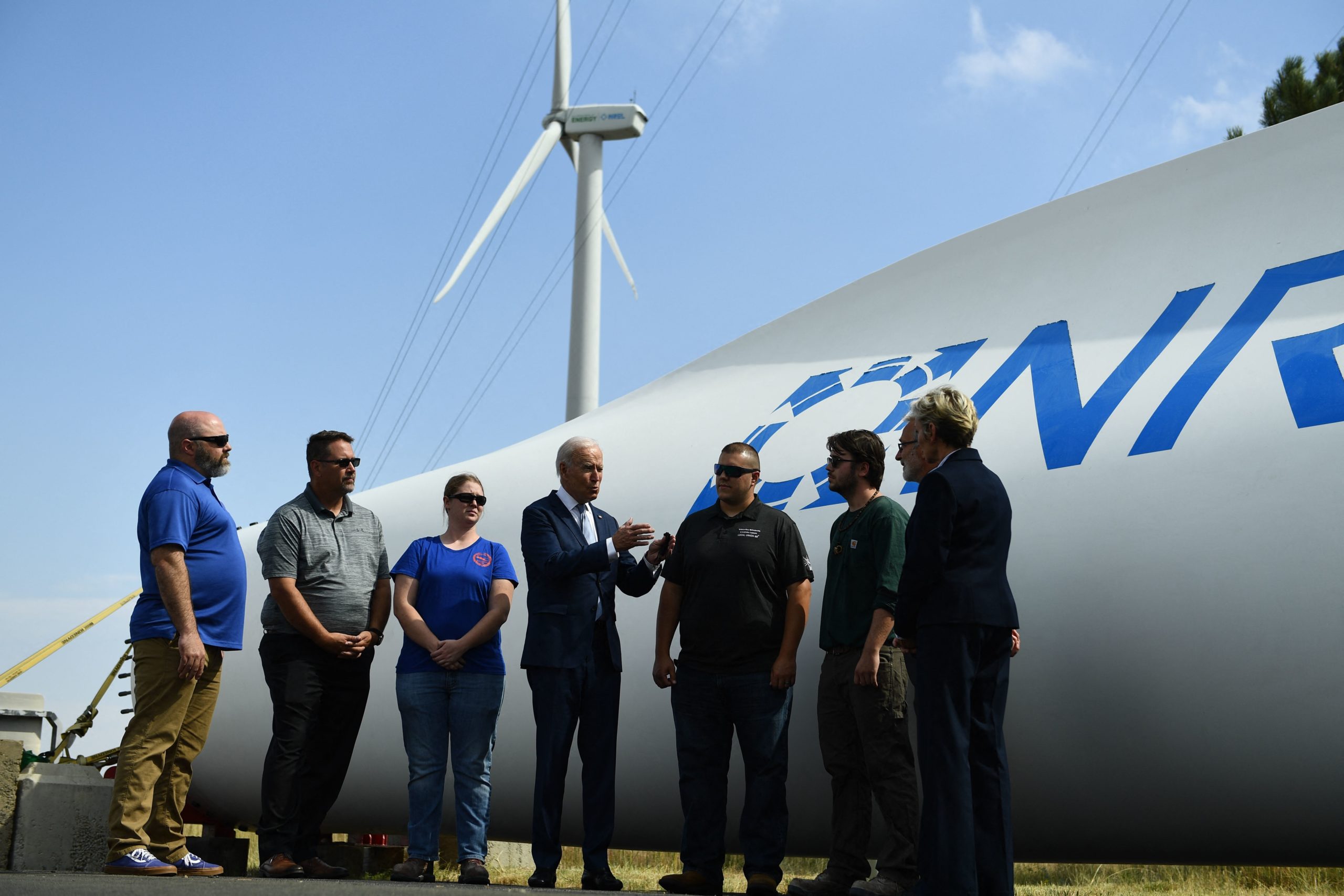 However, the Biden administration has prioritized developing wind and solar energy over nuclear since taking office. Experts have criticized wind and solar as intermittent and unreliable sources of energy.

There are still burdensome regulations preventing development of future nuclear reactors nationwide. More than a dozen states have strict rules restricting such development, according to the National Conference of State Legislatures. (RELATED: John Kerry Brushes Off Question About Slave Labor In China, Says ‘That’s Not My Lane’)

Just a handful of nuclear plants have been constructed in the U.S. over the last two decades. In 2012, a plan to build a nuclear plant was approved, marking the first approval in more than 30 years and, in 2016, a Tennessee reactor became the first to come online in 20 years, the Energy Information Administration said.

‘Both expensive and dangerous’

Dating back to the 1970s, environmental activists have opposed relying upon nuclear. In October, the Center for Biological Diversity and five other prominent environmental groups penned a letter to the White House, Senate and House, urging them not to include funding for nuclear in the budget reconciliation package making its way through Congress.

“Nuclear energy has no place in a safe, clean, sustainable future,” the international environmental group Greenpeace said on its website. “Nuclear energy is both expensive and dangerous, and just because nuclear pollution is invisible doesn’t mean it’s clean.”

Greenpeace argued that nuclear energy poses the risk of a catastrophic meltdown similar to Fukushima and Chernobyl. The group also said there is no clean or safe way to clean up radioactive waste which is created during the fission process. 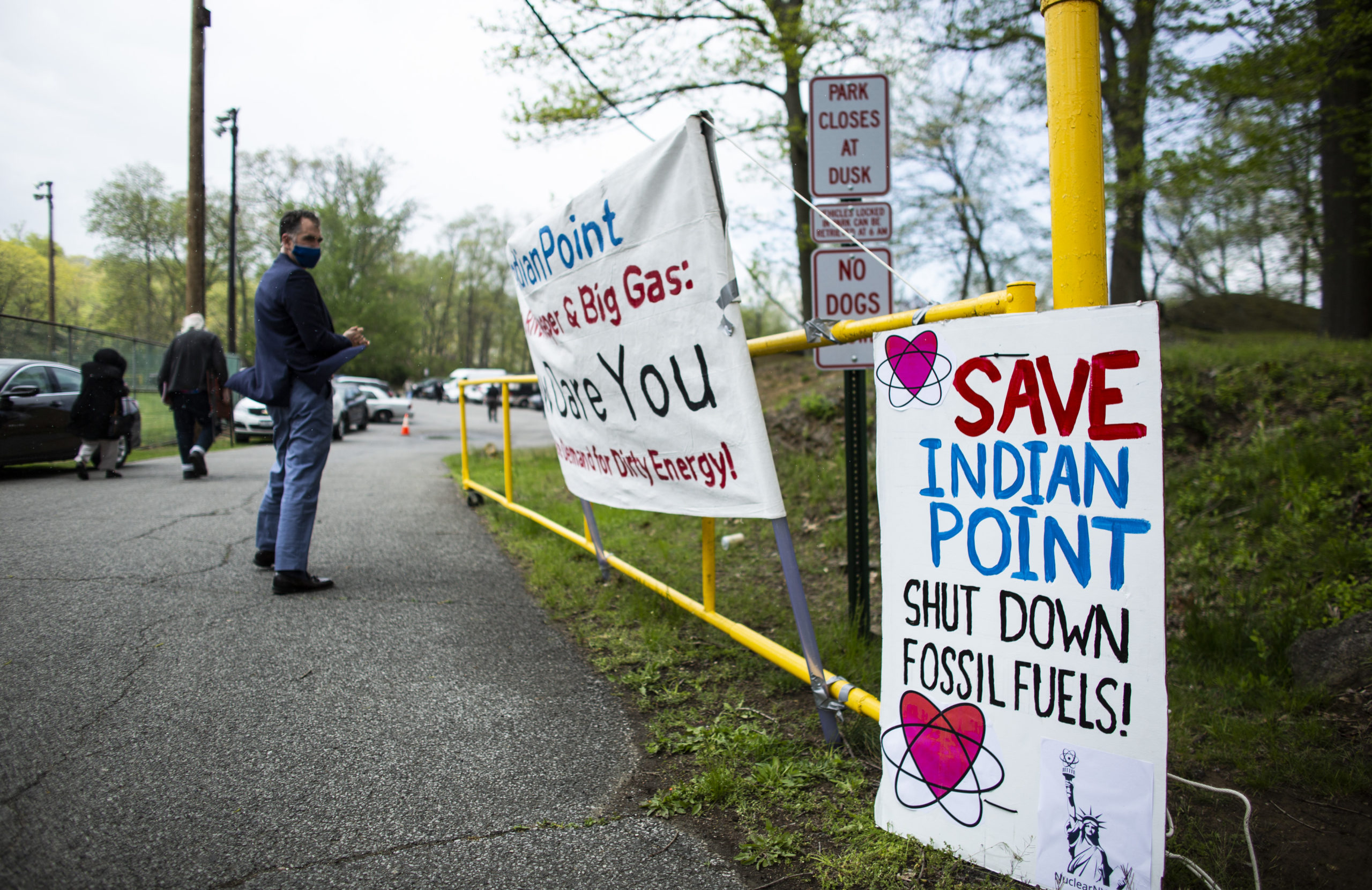 People leave after a ceremony to thank workers of the nuclear plant Indian Point on April 30 in Buchanan, New York. (Kena Betancur/Getty Images)

The total used nuclear fuel used over the last 60 years, though, could fit on a football field at a depth of less than 10 yards, according to the Energy Department. In addition, emerging technology may offer a path forward for recycling spent nuclear waste.

“I think this is a slow process, right, and I don’t know that there’s any one deal or a meeting that entirely turns the corner, but we’re headed down a road,” Craig Piercy, executive director and CEO at the American Nuclear Society (ANS), told the DCNF in an interview. “The sooner that we realize it and plan for it, the better off we’re going to be in terms of our energy reliability and resiliency.”

“Nuclear is a big part of achieving that long term objective,” he added. (RELATED: ‘People Died’: Democratic Congressman Says It Hit 180 Degrees In Portland This Summer Due To Climate Change)

Piercy — whose organization represents 10,000 nuclear engineers, scientists, and technologists — believes more people will begin to believe more in nuclear as a viable alternative to fossil fuels. He noted that the Union of Concerned Scientists, an environmental group, recently changed their tune on the issue.

Meanwhile, the Senate Energy and Natural Resources Committee held a hearing examining nuclear power on Nov. 4. Experts from the Idaho National Laboratory (INL), American Electric Power and Council of Radionuclides and Radiopharmaceuticals testified in favor of nuclear as a reliable energy source. 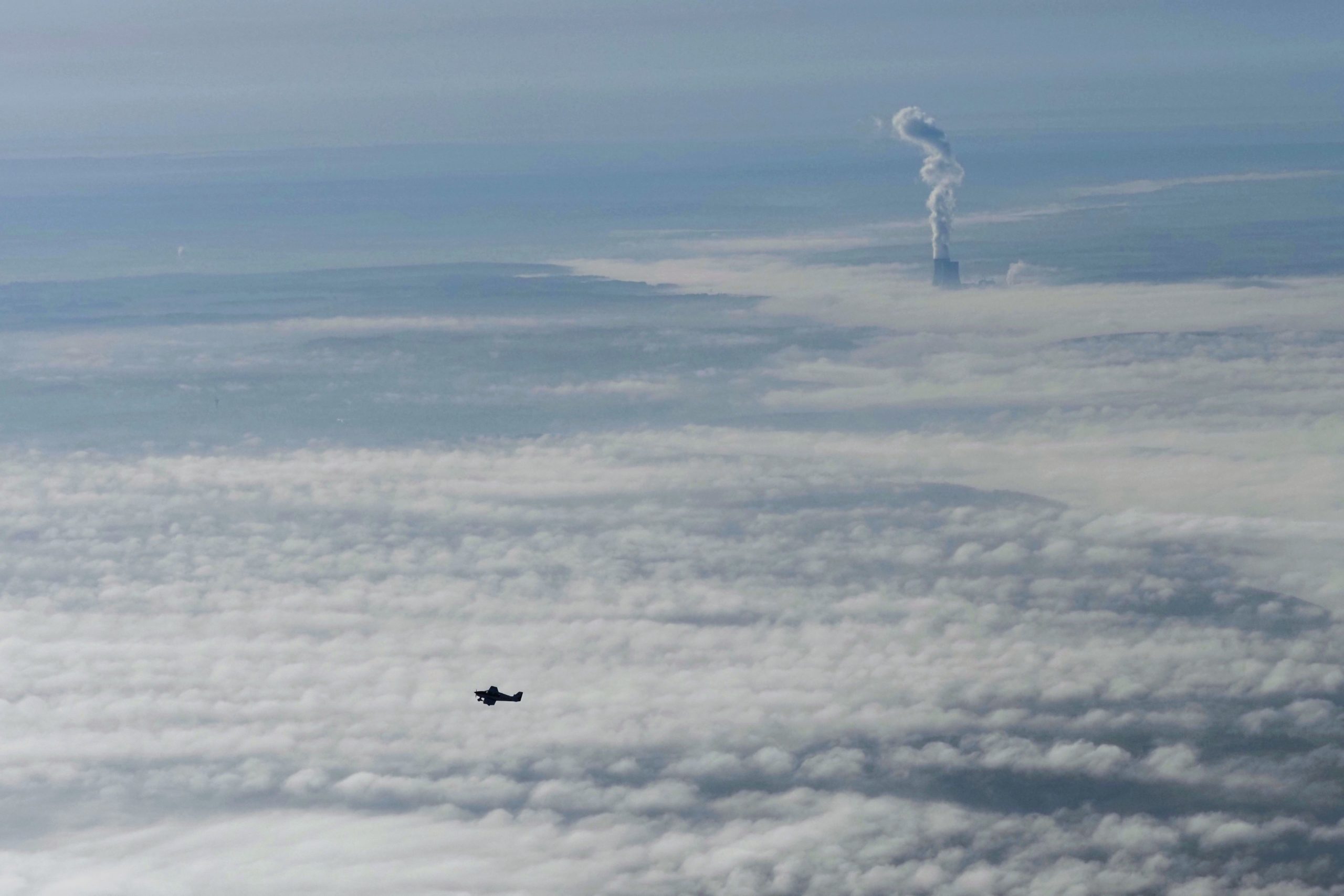 The cooling towers of a nuclear plant are seen on Nov. 10 in Chatellerault, France. (Guillaume Souvant/AFP via Getty Images)

“As developing economies begin to shift to more energy-intensive industries, the U.S. must be on the cutting edge of developing the technologies required to decarbonize industry,” Chairman Joe Manchin stated during his opening remarks.

“This shift is an enormous opportunity to deploy new technologies domestically and abroad to promote job growth here in the U.S. as the demand increases for nuclear technologies that reduce emissions and deliver industrial products,” the West Virginia Democrat continued.

While some remain skeptical of nuclear power, France may provide a powerful case study of what a transition to such an energy source could look like. The European nation aggressively developed its nuclear infrastructure in the 1970s and 1980s.

“Among all the advanced economies, France has the lowest carbon emissions, thanks to the nuclear power industry,” International Energy Agency Executive Director Fatih Birol told the Financial Times in July.

France has emitted the least amount of carbon dioxide relative to gross domestic product compared to all G20 nations over the last decade, according to World Bank data. The French also have the least emissions per capita relative to most competing world powers. 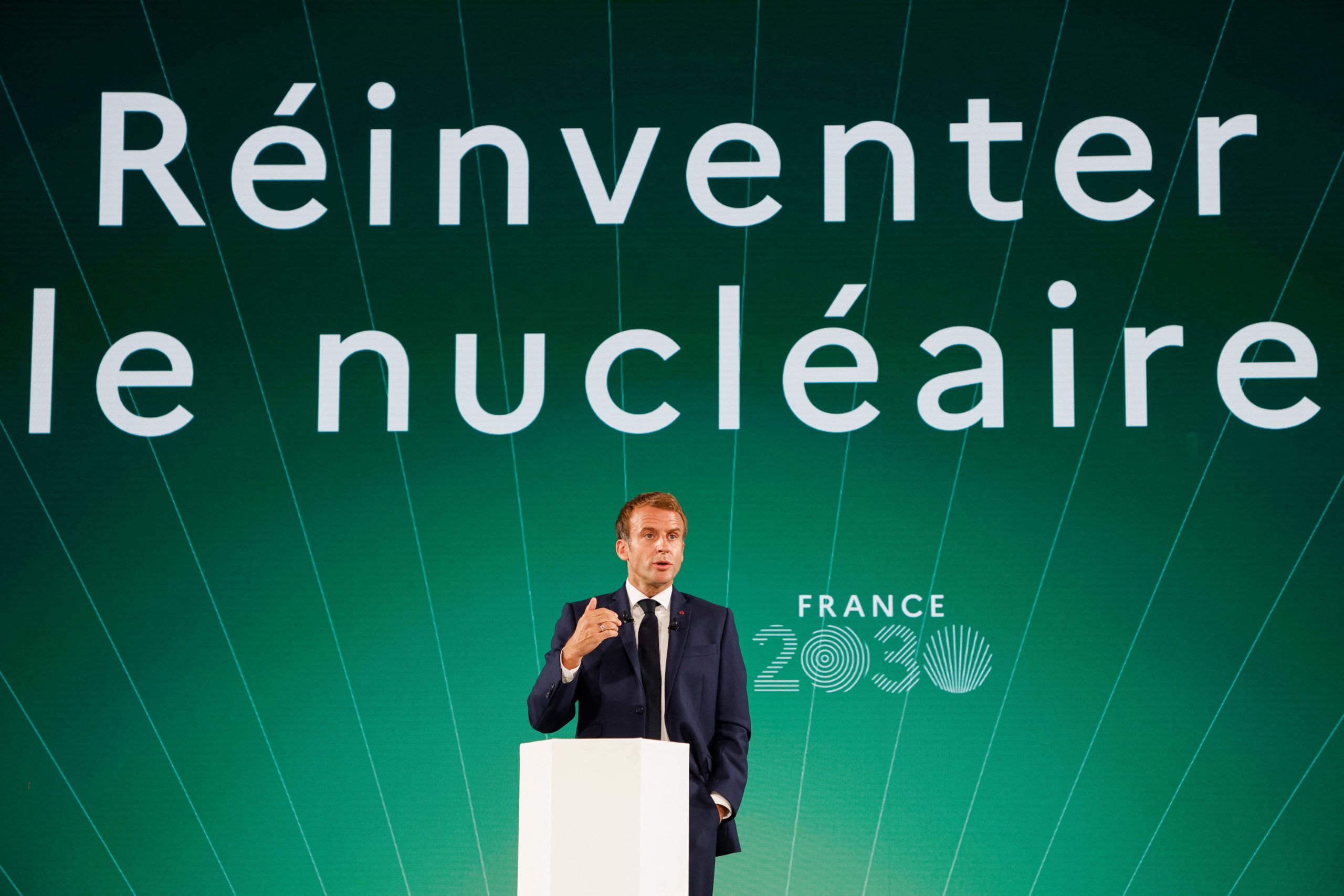 French President Emmanuel Macron speaks during a presentation of the “France 2030” investment plan in Paris, on Oct. 12. (Ludovic Marin/Pool/AFP via Getty Images)

“There are a lot of good lessons to be learned from the French experience,” Piercy told the DCNF, noting that France made its decision to invest in nuclear for national security reasons.

“It’s about energy, but it’s also about our security,” he continued. “It’s about the resilience of our economy and I think that there’s a big opportunity there.”

France has become a net exporter of electricity because of its nuclear infrastructure, according to the World Nuclear Association. (RELATED: Rolls-Royce To Develop ‘Low Cost, Low Carbon’ Nuclear Reactor For Britain)

French President Emmanuel Macron recently doubled down on nuclear, announcing additional funding for the sector as part of a $35 billion investment for renewable energy more broadly, according to Fortune Magazine. France would put the funds toward developing new mini modular reactors which are less expensive than traditional nuclear plants.

“To produce energy, especially electricity, we are in luck,” Macron remarked in a nationally televised speech in October, Fortune reported. “The country’s nuclear power installation is already in place.”