While the ceremonious event has been an annual White House fixture for decades, legal scholars are concerned that the blanket presidential pardoning of turkeys may be outside the scope of the president’s enumerated powers, posing possible constitutional violations.

“These laws are too enumerable and too incomprehensible that there is a possibility that somebody could make a plausible case that the presidential turkey pardon runs afoul of the law,” said attorney Mike Chase, author of the popular Twitter account @CrimeADay.

According to Article II, Section 2, Clause 1 of the United States Constitution, the president “shall have Power to grant Reprieves and Pardons for Offences against the United States, except in Cases of Impeachment.”

“One of the issues with the presidential pardon is that there is actually never any kind of declaration about the scope of the pardon issued to the turkey. There can obviously be blanket pardons, but at the same time, I would think that it’s unlikely that a turkey is committing a federal offense as a general matter. Given the relatively stationary life of a turkey, most are probably committing state crimes at best, and it would be outside the president’s constitutional authority to be issuing a pardon for any kind of state conduct that a turkey was engaging in,” Chase continued.

Chase told the Daily Caller that, “while there are no federal statutes to which I am aware of that refers to an offense committed by an animal, there are some statutes that don’t specify who the doer of the crime is. So I don’t think under criminal law there is capacity on behalf of a turkey, but there are certainly plenty of prohibitive acts that a turkey could engage in that would constitute a federal crime.”

“Also, I would look to FAA regulations which create enumerable crimes for flight and flying in restricted airspace. Turkeys don’t fly very well, but they may be able to fly a little bit, so maybe there’s that. But there’s all kinds of federal property they can trespass on, and while they’re there, I know they’re not super agreeable creatures, so they could definitely assault people on federal land too, which is just an additional federal crime,” said the attorney. 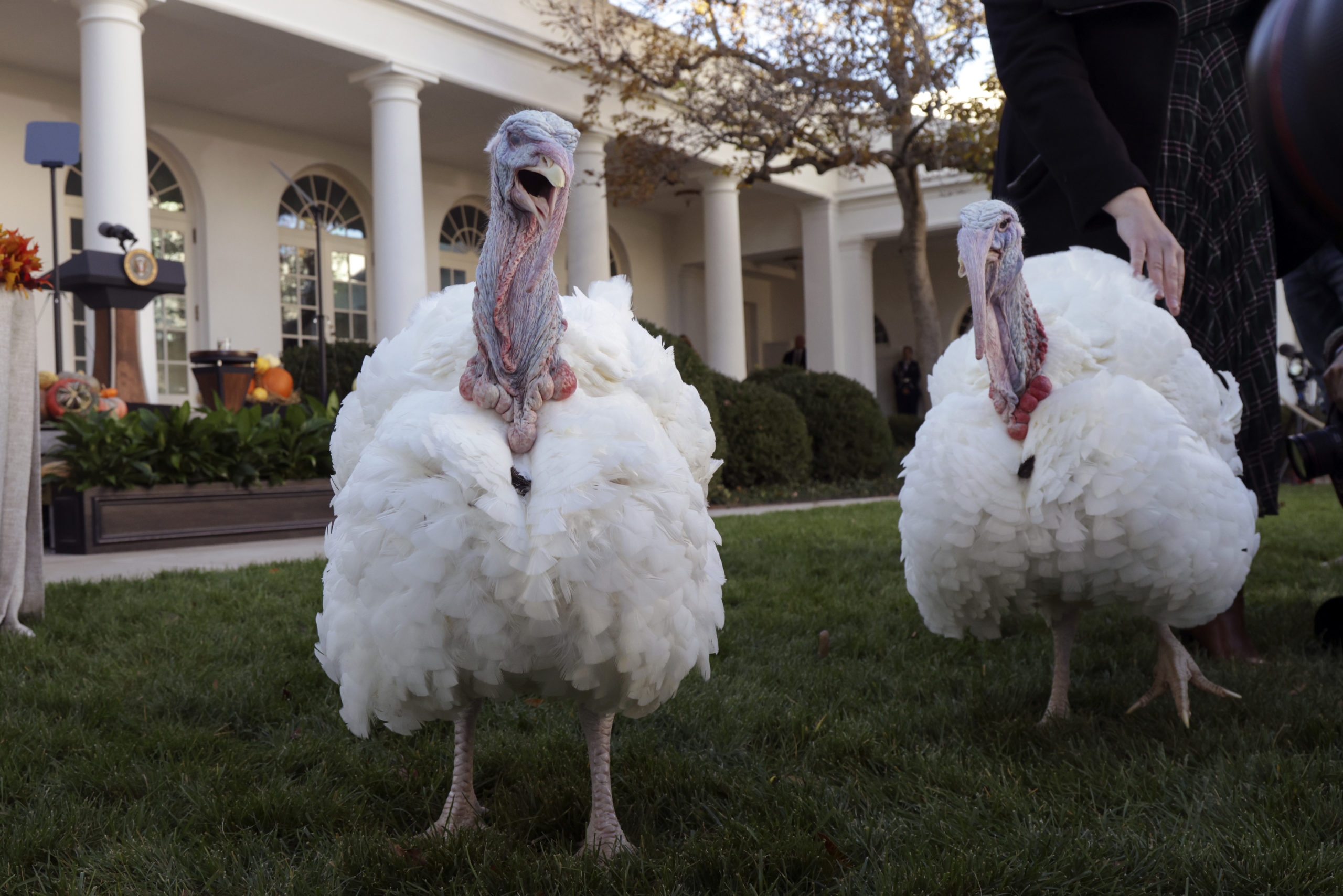 Turkeys, Peanut Butter and Jelly, wait for U.S. President Joe Biden during the 74th annual Thanksgiving turkey pardoning in the Rose Garden of the White House on November 19, 2021. (Photo by Alex Wong/Getty Images)

Although Chase was concerned that “turkeys might be in a jurisprudential limbo because they may be capable of committing offenses against the United States, but they may not get the benefit of the Bill of Rights,” the Eighth Amendment protects against “cruel and unusual punishment.”

“The good news for the turkeys is that because of both the ambiguity of the founders and our federal lawmakers, they may both be federal offenders and protected by Eighth Amendment guarantees. I would certainly say that the Eight Amendment restrains the federal government from imposing cruel and unusual punishment, whether a private party can impose cruel and unusual punishment on a turkey; I think our entire food industry allows that.”

In a January 2021 exposé, PETA obtained video evidence of the abysmal conditions at Virginia Tech’s Gobbler’s Rest, home to Peas, Carrots, Bread, and Butter, four turkeys pardoned by former President Donald Trump in 2018 and 2019. A veterinarian who reviewed the footage told PETA that these conditions present “numerous, cumulative, and chronic stressors that severely compromise the physical and psychological well-being of these turkeys.”

“A pardon is supposed to be complete,” Brian Kalt, Professor of Constitutional Law at Michigan State University, told the Daily Caller. “So if these pardoned turkeys are living in squalid conditions, then the question becomes, is this part of a criminal sentence? If so, then the pardon must not have been effective, or the pardon was ignored, which would be a problem.”

Kalt told the Daily Caller that “if the turkeys are living in squalid conditions and it doesn’t have to do with any sort of criminal penalty, then I don’t think the Eighth Amendment would apply. But you have other constitutional rights that require certain types of treatment such as due process claims, civil claims for false imprisonment, battery, but constitutionally, it doesn’t really add up, especially if they had been pardoned.”

PETA spokesperson and campaign specialist Ashley Byrne laughed when considering Eighth Amendment protection for turkeys, saying, “if we’re taking issue with the pardon, maybe we should be looking at the Constitution.”

On the constitutionality of the presidential turkey pardon, Byrne told the Daily Caller that “presidential pardons are for those accused or convicted of federal crimes and so the mockery of pardoning turkeys who have done nothing wrong and who are then sent to live in a tiny barren enclosure is abusive and disrespectful to these sensitive, intelligent individuals who feel pain and love and fear just like people do.”

Moreover, Byrne believes “the presidential turkey pardon is really a publicity stunt to promote the factory farming industry” and is “really something that should have gone a long time ago.” (RELATED: OPINION: Annual Turkey Pardoning A White House Tradition) 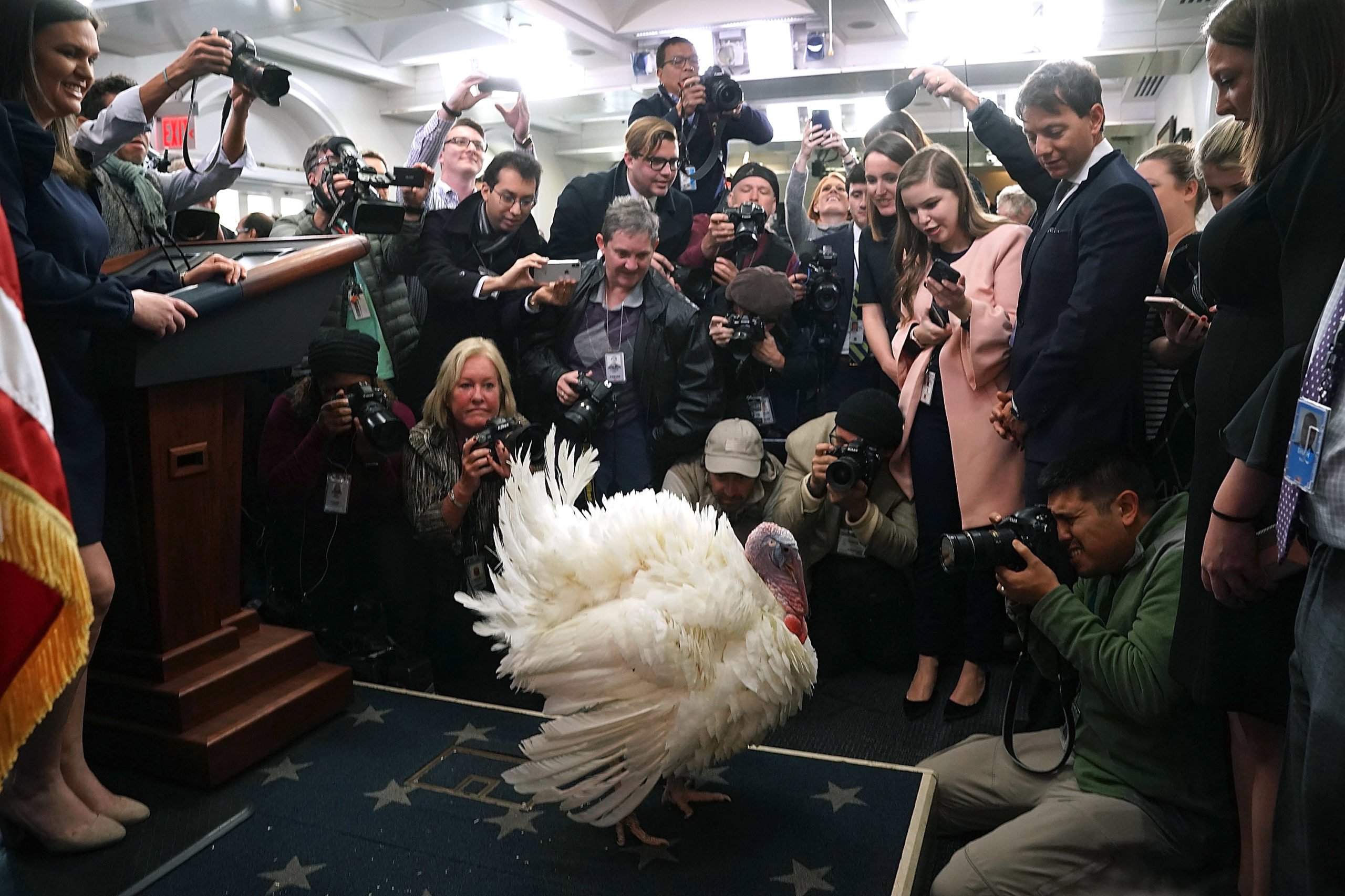 Wishbone the turkey is put on display for members of the news media with White House Press Secretary Sarah Huckabee Sanders (L) in the Brady Press Briefing Room at the White House November 21, 2017 in Washington, DC. (Photo by Chip Somodevilla/Getty Images)

“The turkey pardon is promoting an industry that is absolutely not in keeping with American values. Americans pride themselves on respecting freedom, dignity, and moral and ethical behavior, and the factory farming industry just spits in the face of these values. I would certainly say that it’s un-American,” added the PETA representative.

Chase was also skeptical of industrial agriculture organizations like the National Turkey Federation, finding it “interesting that the turkey lobby is the one that is providing a turkey that’s ultimately getting pardoned, raising issues beyond just conflicts of interest.”

“There may be questions whether or not the turkeys are in-kind campaign contributions because, although they’re acting within their presidential capacity to issue pardons, we’ve seen a lot of dialogue about this sort of quid-pro-quo for pardons and so if there is quid-pro-quo for turkey pardons, then I think that raises tricky issues,” concluded Chase.