House Democrats passed President Joe Biden’s nearly $2 trillion spending package Nov. 19 after months of high-stakes negotiations, but it faces an even rockier path through the 50-50 Senate before becoming law.

Though the bill faces another vote-a-rama, which allows Republicans the opportunity to force unlimited, politically tricky votes on various amendments, this may prove to be far from the biggest hurdle. Senators from Joe Manchin of West Virginia, the most conservative Democrat in the chamber, to Bernie Sanders of Vermont, an independent who caucuses with Democrats, are already on-record opposing various provisions and are preparing to rework the House-passed bill.

After the bill passed the House on near party lines Nov. 19, leadership touted many of the provisions at risk of omission, saying that the differences between House and Senate Democrats were minimal.

“Ninety percent of the bill was written together — House, Senate, White House,” House Speaker Nancy Pelosi said at a press conference shortly after the bill passed, adding that while “some minor changes” may occur, they would be “nothing major in my opinion.”

But Pelosi’s optimism may not pan out, as Senate Democrats zero in on policies from paid family leave to state and local tax (SALT) deductions. Other provisions from raising taxes on wealthy Americans and corporations to overhauling IRS monitoring of personal bank accounts, have already been scrapped due to opposition from centrist Democrats like Manchin and Arizona Sen. Kyrsten Sinema.

Below are several policies that may fall victim to Senate Democrats, despite their House colleagues’ best efforts to make them law. (RELATED: House Sends Biden’s Mammoth Spending Package To Senate With Provisions That Democratic Senators Oppose) 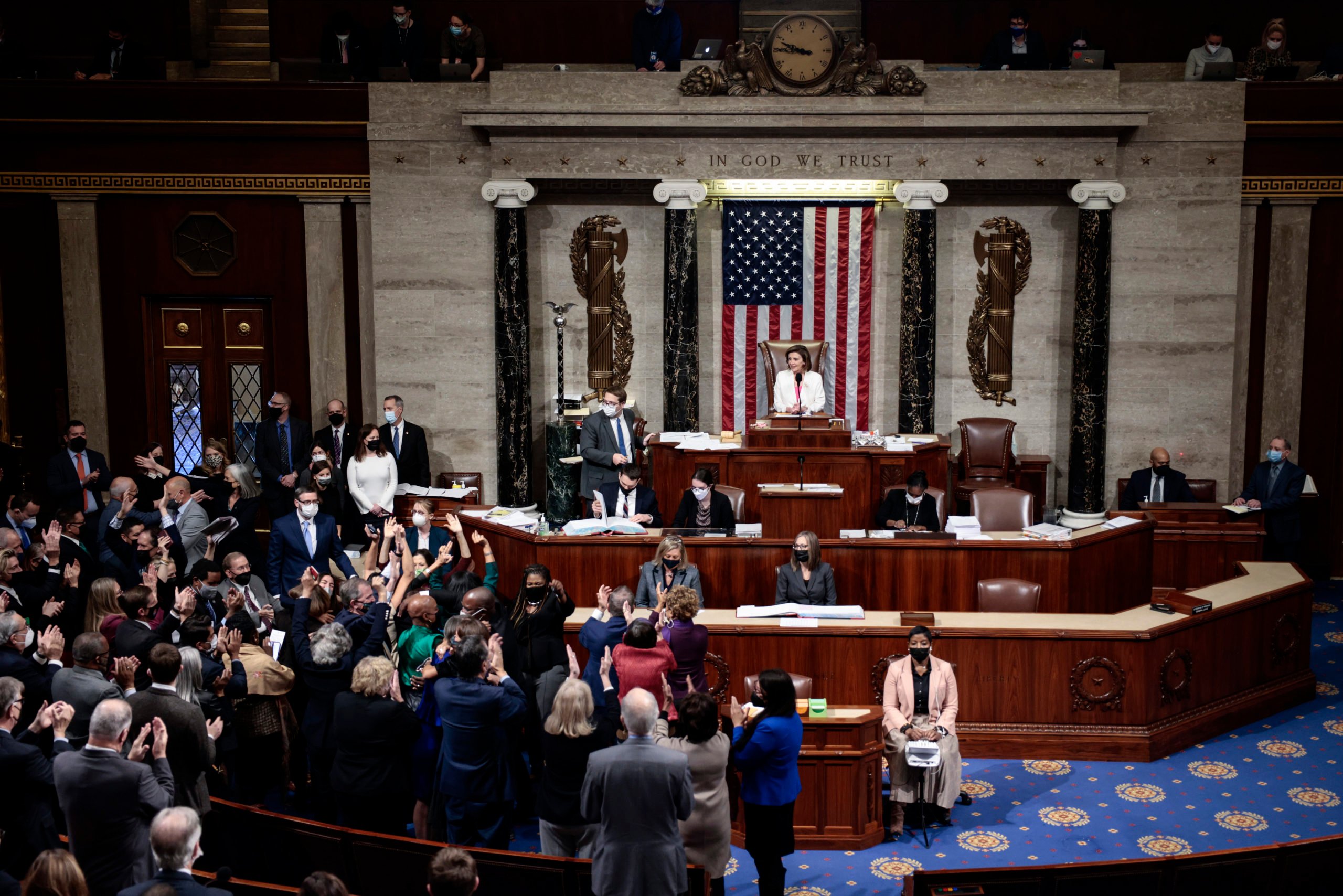 Democrats react to the passage of the Build Back Better Act the morning of Nov. 19. Its passage was undoubtedly a victory Speaker Nancy Pelosi.(Anna Moneymaker/Getty Images)

Manchin has repeatedly said that he opposes paid family and medical leave’s inclusion in the package, though he has also said he would support a bipartisan bill establishing it in the future. While the original proposal included 12 weeks of paid family leave, the House-passed bill has just four and would not begin until 2024. (RELATED: House Sends Largest Infrastructure Bill In Decades To Biden’s Desk With Bipartisan Support)

“That’s a challenge,” Manchin said in early November when news broke that Democrats were planning to re-add the provision to the bill despite his stated opposition. “I just don’t support ‘unpaid’ leave. That means getting more debt and basically putting more social programs that we can’t pay for.”

Manchin has also said that any reconciliation bill must include the Hyde Amendment, which bars Americans’ tax dollars from funding abortions in nearly all cases. The amendment was excluded from the House bill.

House Democrats from high-tax states like California, New York and New Jersey insisted that the SALT cap be lifted from the current $10,000 cap adopted in 2017 as part of former President Donald Trump’s Tax Cuts and Jobs Act. In their version of Biden’s package, the cap would be lifted to $80,000 annually through 2030.

While the policy was touted by coastal House Democrats, including Pelosi, some of their Senate colleagues have staunchly objected to including a tax cut that would overwhelmingly benefit the wealthy Americans.

“[I’m] not a big fan,” Montana Democratic Sen. Jon Tester said of the SALT provisions after the House passed the bill. “I think it gives tax breaks to the wrong people: rich people.”

Sanders, who has long opposed raising the SALT cap, was even blunter. “I think it’s bad politics, it’s bad policy … The bottom line is, we have to help the middle class, not the 1%,” he said.

Even Manchin, who constantly torpedoed Sanders’ attempts to broaden the overall bill, has opposed reigning in how much in taxes Americans can deduct via SALT. While he has not commented publicly on the provision, he was the only Democrat who endorsed Republicans’ effort to establish the cap four years ago. (RELATED: Sen. Sanders Rips One Of Democrats’ Proposed Tax Cuts: ‘A Terrible, Terrible Message’) 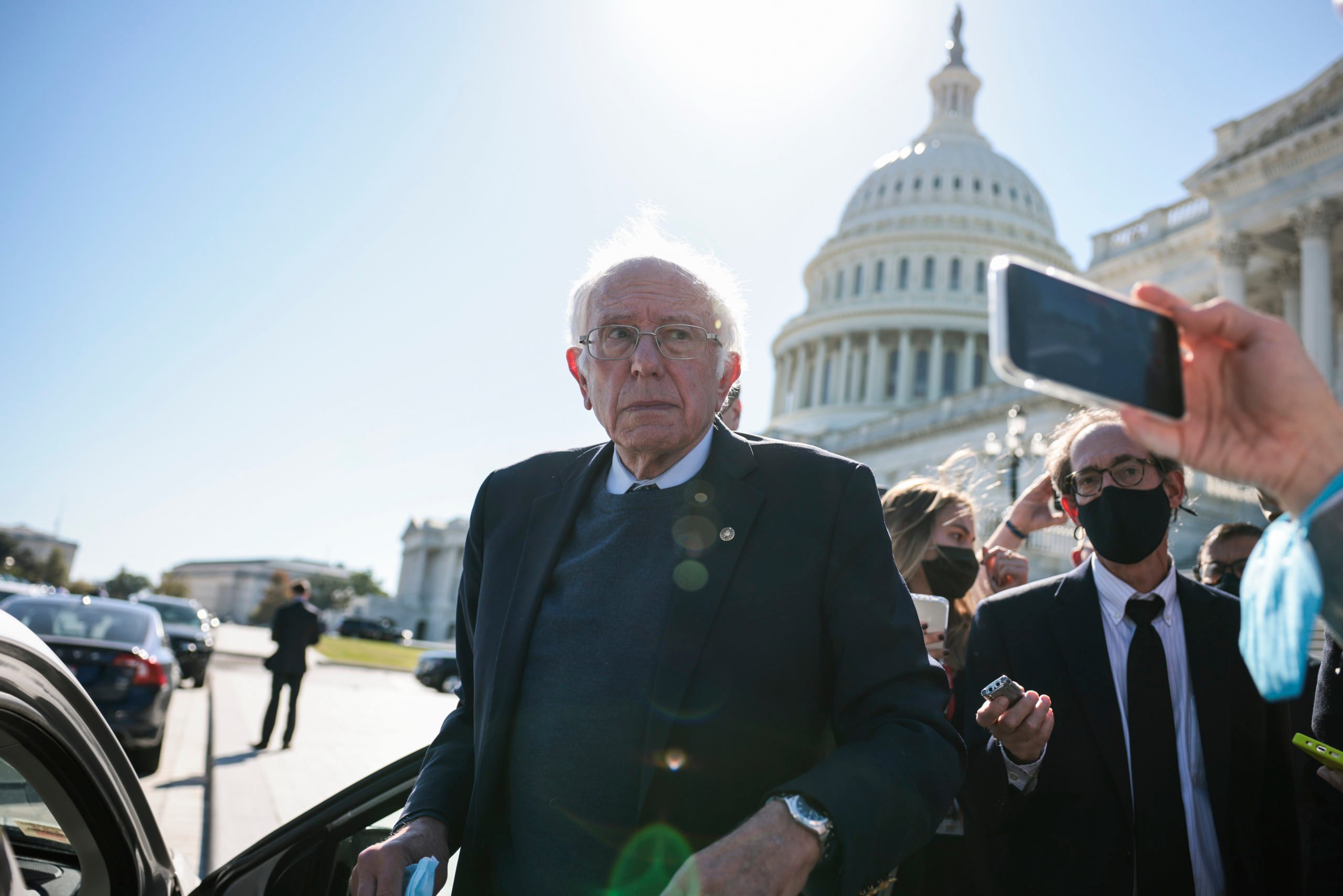 Sen. Bernie Sanders speaks with reporters as he leaves the Capitol in October. (Anna Moneymaker/Getty Images)

Manchin has already scrubbed the White House’s proposed Clean Electricity Payment Program from the bill, and, along with Tester, ruling out a carbon tax as a replacement provision shortly after.

As a result, an electric vehicle from General Motors or Ford could receive $12,000 in deductions, while one from Toyota, which has a large presence in West Virginia, could receive just $7,500.

“This can’t happen. It’s not who we are as a country. It’s not how we built this country, and the product should speak for itself,” Manchin told Automotive News on Nov. 11 while at a Toyota plant in his home state. “We shouldn’t use everyone’s tax dollars to pick winners and losers … Hopefully, we’ll get that … corrected.”

Climate change provisions also account for about $550 billion of the House-passed bill, and moderates, including Manchin, have insisted that the bill be fully paid for. The Congressional Budget Office estimated last week that the package would add about $367 billion to the deficit over 10 years, not including potential revenue from IRS enforcement, meaning that the provisions could be tampered down if senators object to the bill’s overall price tag. (RELATED: Republicans Agree With Democrats That Biden’s Budget Is ‘Transformational’)

Included in the House-passed bill is a provision that would grant provisional work permits to as many as 6.5 million noncitizen immigrants. Democrats hope that this will be the first step on a pathway to citizenship, but their last two attempts to include some type of immigration reform have been blocked by the Senate Parliamentarian, who ruled that the changes didn’t directly impact the budget to a point where they could be included in the filibuster-proof legislation.