A majority of Americans say President Joe Biden is to blame for how divided America has become, according to a Monday poll from the Trafalgar Group and Convention of States.

The poll surveyed 1,092 likely general election voters between Nov. 13 and Nov. 16 and reported a 3% margin of error. Trafalgar employs a number of methods for conducting its polls, including live phone calls, automated calls, emails, text messages, and two other proprietary methods it does not share publicly. (RELATED: POLL: Majority Of Americans Say Inflation Has Forced Them To Change Thanksgiving Plans)

While nearly 79% of Democrats didn’t connect Biden with any divisions in the U.S., 88% of Republicans and 64% of Independents responded that he was at least somewhat responsible.

The Trafalgar Group was one of only two polling firms that accurately predicted Trump’s victory in the presidential election of 2016. The firm was also among the few that predicted Republican Florida Gov. Ron DeSantis’ win in 2018, as well as Republican victories in New Jersey and Virginia in early November. 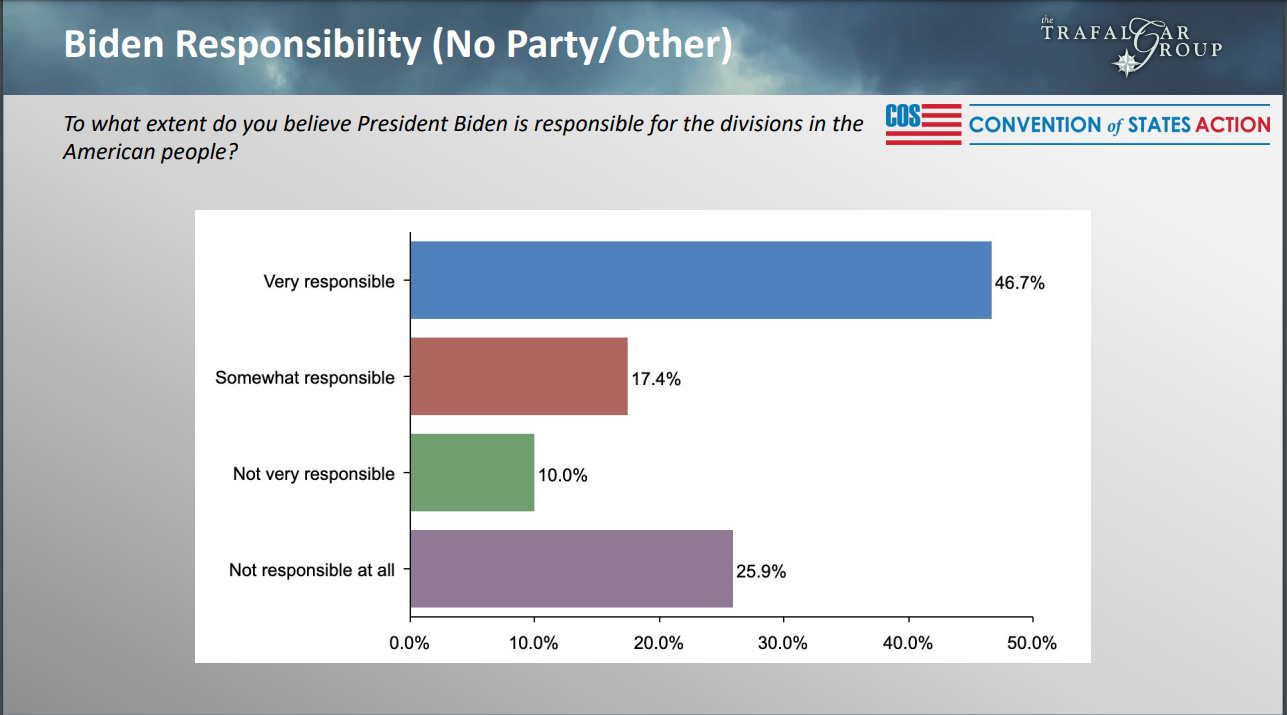 Biden campaigned primarily on a unity message for the 2020 presidential election, but many have criticized him for jumping to the left since gaining office.

“If Democrats remain on their current course and keep coddling and catering to progressives, they could lose as many as 50 seats and control of the House in the 2022 midterm elections,” Mark Penn, a former political strategist and adviser to former President Bill Clinton wrote in The New York Times. “Yelling ‘Trump, Trump, Trump’ when Mr. Trump is not on the ballot or in office is no longer a viable campaign strategy.”

Recent polls have shown that Americans have become deeply divided over the past 20 years since 9/11, when most Americans agreed that the country was moving in the right direction and maintained respect for opposing political parties, according to NBC News. Today, however, 60% of Americans say the country is on the wrong track, and both political parties are deeply unpopular.

Read more on the poll below.

Trafalgar/Convention of States poll by Anders Hagstrom on Scribd