The Metro Nashville Board of Education won’t comply with a Tennessee state law that bans transgender athletes from participating in girls’ sports, the Tennessean reported.

Some of the board members met earlier in November to review policies, and they recommended that the entire board vote to shelve the policy determining who can play on which sports teams, the Tennessean reported. Metro Nashville Public Schools’ (MNPS) current policy reportedly says “no person shall, on the basis of sex, be excluded from participation in, be denied the benefits of, be treated differently from another person, or otherwise be discriminated against in any athletic program of the school.”

Tennessee’s law requires students to provide their gender “determined by the student’s sex at the time of the student’s birth” to participate “in a middle school or high school interscholastic athletic activity or event,” but the law does not apply to students in kindergarten through fourth grade. The state’s board of education, MNPS board and public charter schools must enforce policies that align with the legislation’s language. 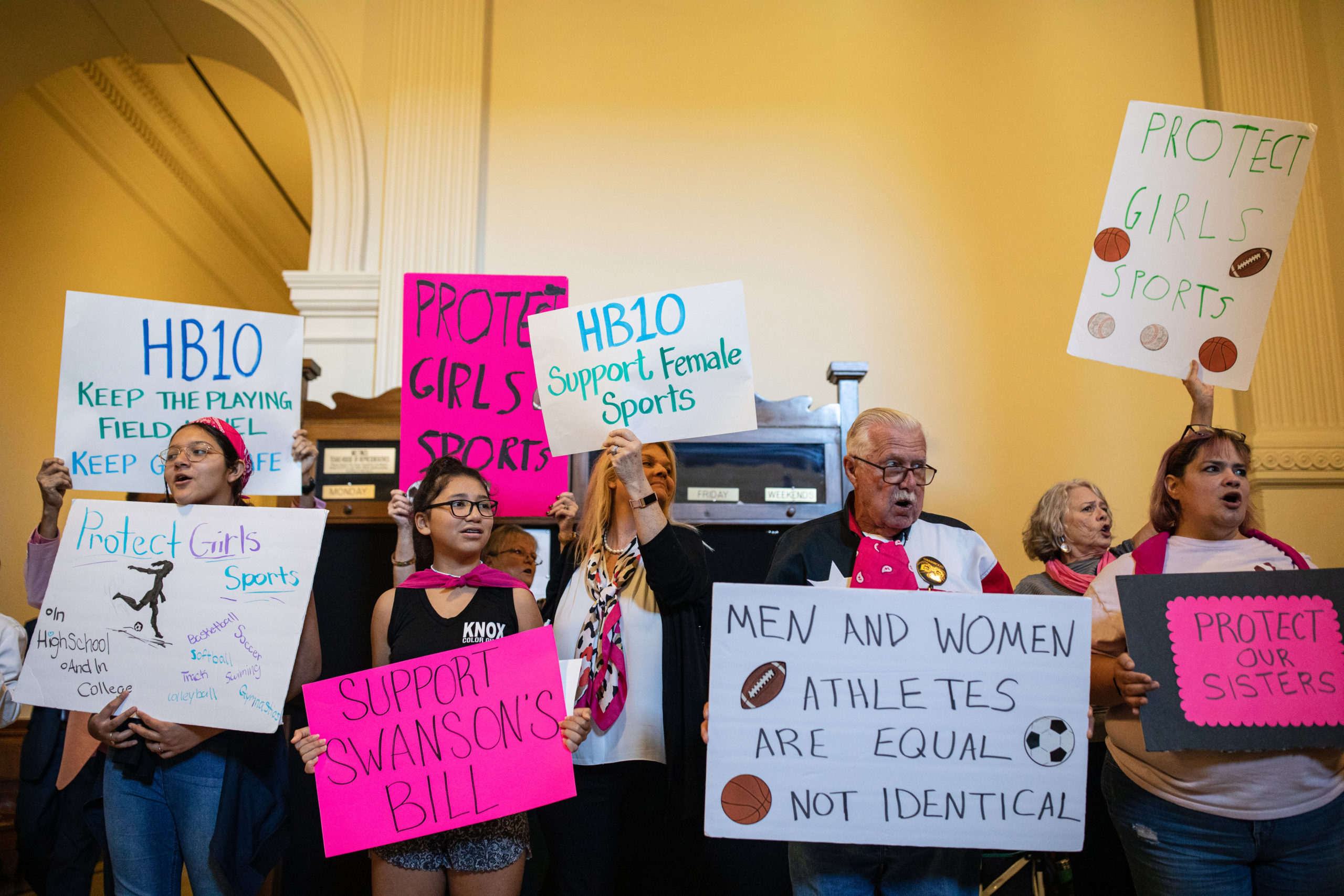 Demonstrators supporting restrictions on transgender student athletes are gathered at the Texas State Capitol on the first day of the 87th Legislature’s third special session on September 20, 2021 in Austin, Texas. Following a second special session that saw the passage of controversial voting and abortion laws, Texas lawmakers have convened at the Capitol for a third special session to address more of Republican Gov. Greg Abbott’s conservative priorities which include redistricting, the distribution of federal COVID-19 relief funds, vaccine mandates and restrictions on how transgender student athletes can compete in sports. (Photo by Tamir Kalifa/Getty Images)

MNPS has not approved an updated policy that would require students to “meet the eligibility requirements set forth by the state and the governing body of the sport,” the Tennessean reported. Some board members have reportedly suggested waiting until they know the outcome of a lawsuit challenging the new law.

A Knox County Schools transgender high school student, Luc Esquivel, along with the American Civil Liberties Union filed a lawsuit against Republican Tennessee Gov. Bill Lee, the state’s education commissioner, Penny Schwinn, the state board of education, the Knox County Board of Education and Knox County Schools’ superintendent, Bob Thomas, over the law, because it prevents Esquivel from trying out for the boys’ golf team, Fox 17 reported. (RELATED: DC Public Schools Tells Families To ‘Decolonize Their Thanksgiving,’ Describes It As A Day ‘Difficult For Many’)

“When I read this policy, I know that when we say ‘eligibility requirements,’ the reason for this is discrimination against trans students and I know when we say ‘necessary documentation,’ we are talking about asking children to provide documentation around their biological (sex),” MNPS board member Emily Masters told the Tennessean. “And that is why I find it immoral, unethical, a violation of civil rights, and not at all in line with what I know about our district and how we choose to care for students.”