Financial disclosures show a precipitous decline in contributions to the Clinton Foundation in the years following former president Bill Clinton and former first lady Hillary Clinton’s fall from the heights of their political power.

The Clinton Foundation received roughly $16.3 million in contributions in 2020, according to their newly released Form 990. This was a 93.6% decrease from the nearly $250 million the charitable organization raked in during 2009 after Hillary Clinton was appointed Secretary of State.

“Money was pouring in when Hillary Clinton was a senior official and a candidate for president. The fact that foundation donors received special access to the Secretary of State isn’t surprising, nor is the fall in foundation funding after her 2016 election loss. Many people thought people were supporting the former president, but it really looks like they were cozying up to who they thought was going to be the future president — a situation that can’t be repeated,” the POGO General Counsel told the Daily Caller.

“Now, with ethics concerns raised about Mnuchin and Kushner, as well as judges, it is vital that Congress put politics aside and pass an ethics reform package for all three branches of government. Congress must eliminate conflicts of interest, restrict special access, prevent trading on insider knowledge, and stop public servants who cash in for personal or private gain. Recent surveys show that corruption is a major public concern, but with the foxes guarding the henhouse, I’m unsure who will step forward to fix the problem,” said Amey.

“We’ve been seeing a decline in the cash flow to the Clinton Foundation since the 2016 presidential election,” Anna Massoglia told the Daily Caller. Massoglia is an Investigative Researcher at OpenSecrets, a non-profit transparency organization that tracks money in politics.

The Investigative Researcher said that when OpenSecrets spoke with the Clinton Foundation, they explained the strained revenue stream was “due to a lack of events due to an inability to have conferences” and “receiving less money from fundraising events, programs, and services.” Massoglia reasoned that “it would make sense for there to be a significant decrease in 2020 since there were even less in-person events around that time.”

“During the presidential election, of course, Clinton had said that they were going to step back from the foundation for the duration of the election, and if she came into office, that they would wind things down. However, because she was not elected, it was not expected that the foundation would get smaller for any other reason, at least externally,” added Massoglia.

In 2018, Massoglia and OpenSecrets were the first to obtain the Clinton Foundation’s annual 990 Form that showed a $38.4 million revenue stream. While slightly higher than the previous year, donations were still significantly lower than in years when Hillary or Bill Clinton were more influential in American politics. (RELATED: Former Clinton Adviser Is Helping Facebook Whistleblower Lobby Lawmakers)

In a letter accompanying the 2020 filing, Clinton Foundation CEO Kevin Thurm said 2020 “was a difficult year for philanthropy.” However, Massoglia pointed out that many other non-profits did not decline in 2020. In fact, Massoglia pointed out that “there are certainly non-profits in the left-leaning space who are aligned with either very liberal activists or politicians who did see growth last year.” She continued, “a number of left-leaning and liberal-leaning non-profits were positioning themselves within this non-profit space to push policies during the Biden administration. So you did see some non-profits on the left continue to grow pretty significantly in the lead up to the election, either due to fundraising around the election or anticipation of pushing certain policies.”

Giovanni Gallo, co-CEO of ComplianceLine and co-host of the Ethics Experts podcast, believes that it is “of the utmost importance that our political leaders act with the highest level of ethics.” Gallo told the Daily Caller, “whether it’s with the Clintons, or the Bushes, or the Trumps or whoever it is, I think we all have an interest in having transparency and honesty and ethical action, in the highest levels of our government. And I think that when things happen, that either give the appearance of unethical action or obviously, are actually unethical, that it degrades both that confidence and the effectiveness of our government, which is a big problem.”

The Clinton Foundation has faced scrutiny for potential unethical behavior throughout the past two decades. A 2016 report from the Associated Press highlighted that at least 85 of 154 individuals representing private interests who met with Hillary Clinton as Secretary of State donated to the Clinton Foundation and its global programs. In total, those 85 donors contributed as much as $156 million to the foundation.

During Hillary Clinton’s tenure as Secretary of State, the Clinton Foundation received tens of millions of dollars in donations from seven foreign governments with questionable human rights records, including Saudi Arabia, Qatar, Oman, and Algeria, according to the Washington Post. Although Clinton received her nomination as Secretary of State with the condition that only foreign governments who had donated to the foundation before 2008 could continue to do so, the Clinton Foundation accepted a $500,000 donation from the Algerian government in 2010, which violated the agreement with the State Department ethics office. At the time, Algeria was lobbying the State Department heavily amid a State Department report that the Algerian government was engaging in human rights violations.

A 2015 New York Times article investigated the January 2013 purchase of Canada’s Uranium One by Russia’s atomic energy agency Rosatom. From 2009-2013 as Russia steadily assumed control of Uranium One, and with it, a large chunk of the global uranium supply chain, Uranium One’s chairman used his family foundation to make four donations that totaled $2.35 million to the Clinton Foundation. The chairman’s contributions and other donations from company associates were not publicly disclosed by the Clinton Foundation, disregarding the agreement between then-Secretary Clinton and the Obama White House to divulge all donors publicly. Soon after Russia announced their intent to purchase a majority stake in Uranium One, Bill Clinton earned $500,000 after speaking at a Kremlin-linked Russian investment bank that promoted Uranium One stock. As head of the State Department, Secretary Clinton sat on a committee casting a vote to approve the Uranium One sale to the Russians. (RELATED: Evidence Mounting Against Clinton Foundation, Says Congressman)

In 2016, ABC News obtained State Department emails from 2010 between Huma Abedin and top Clinton Foundation official Doug Band planning a State Department lunch with then Chinese President Hu Jintao. Three executives from UBS, the Rockefeller Foundation, and Western Union, who all donated over $1 million to the foundation, were invited to join the lunch. Band asked Abedin if Vice President Joe Biden could sit with the Rockefeller Foundation president, to which Abedin replied, “I’ll ask.” 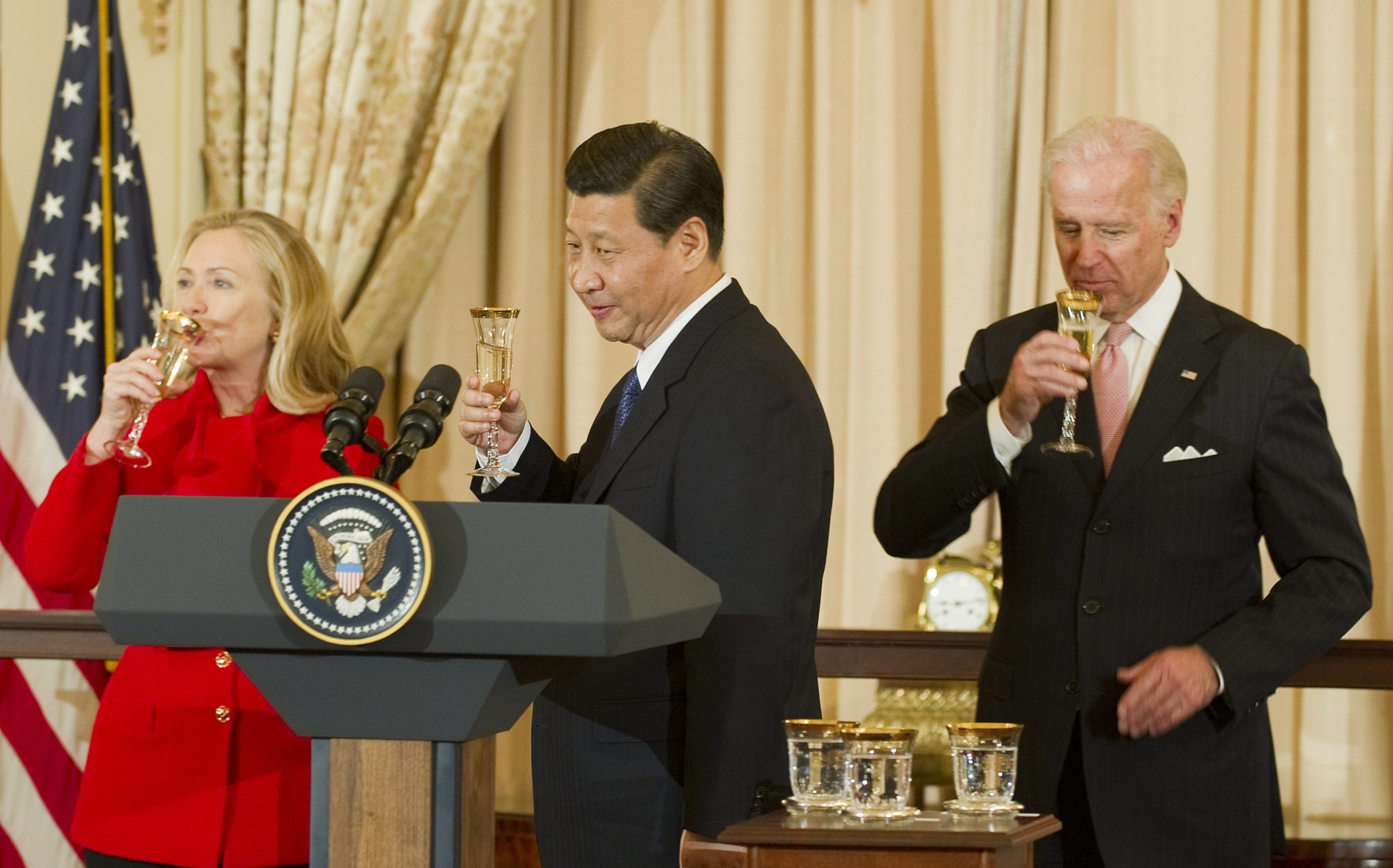 Massoglia, responsible for overseeing OpenSecret’s dark money in politics data, explained that there “is really a very clear picture of the revenue continuing to stay high during the [Clinton Foundation’s] peak when foreign governments and other donors might have had an interest in swaying policy versus when the revenue started to drop after Clinton’s election loss.”

The OpenSecrets researcher believes that “foreign actors, in particular, funneling money to a non-profit closely tied to a politician present the potential to sway the policies that the non-profit may push as well as the politician, which could not only buy influence but buy access to a politician and to others within that politico sphere.” Massoglia noted that “in particular with the Clinton Foundation, there are examples of these events with high profile individuals in DC, which can be a ripe environment for currying influence.”