Huge majorities of Republicans, Democrats and Independents say the U.S. media is biased and its main goal is to advance its own agenda, according to a Thursday poll from the Trafalgar Group and Convention of States.

More than 76% of poll respondents stated that the media is primarily focused on advancing their own political opinions and agenda, with 62.7% of Democrats, 76.1% of Independents and 90.3% of Republicans agreeing. (RELATED: POLL: Huge Majority Of Americans Oppose New Omicron Mandates)

The poll surveyed 1,084 likely general election voters between Dec. 4 and Dec. 7. and reported a 3% margin of error. Trafalgar employs a number of methods for conducting its polls, including live phone calls, automated calls, emails, text messages, and two other proprietary methods it does not share publicly. (RELATED: ‘Will Not Fix The Problem’: Biden Releasing Oil Reserves Due To Politics, Critics Say)

“Thanks to the decentralization of the news through the internet and social media, the mainstream press outlets no longer have a monopoly on controlling the news,” Mark Meckler, President of Convention of States Action, said in a statement provided to the Daily Caller. “Unfortunately, the mainstream media has been slow to adjust to this reality and don’t seem to realize that the average American can now see in real time the difference between the actual facts of a story versus what the mainstream media says. People are realizing the open bias and partisanship of the press, and it is making them increasingly cynical.” 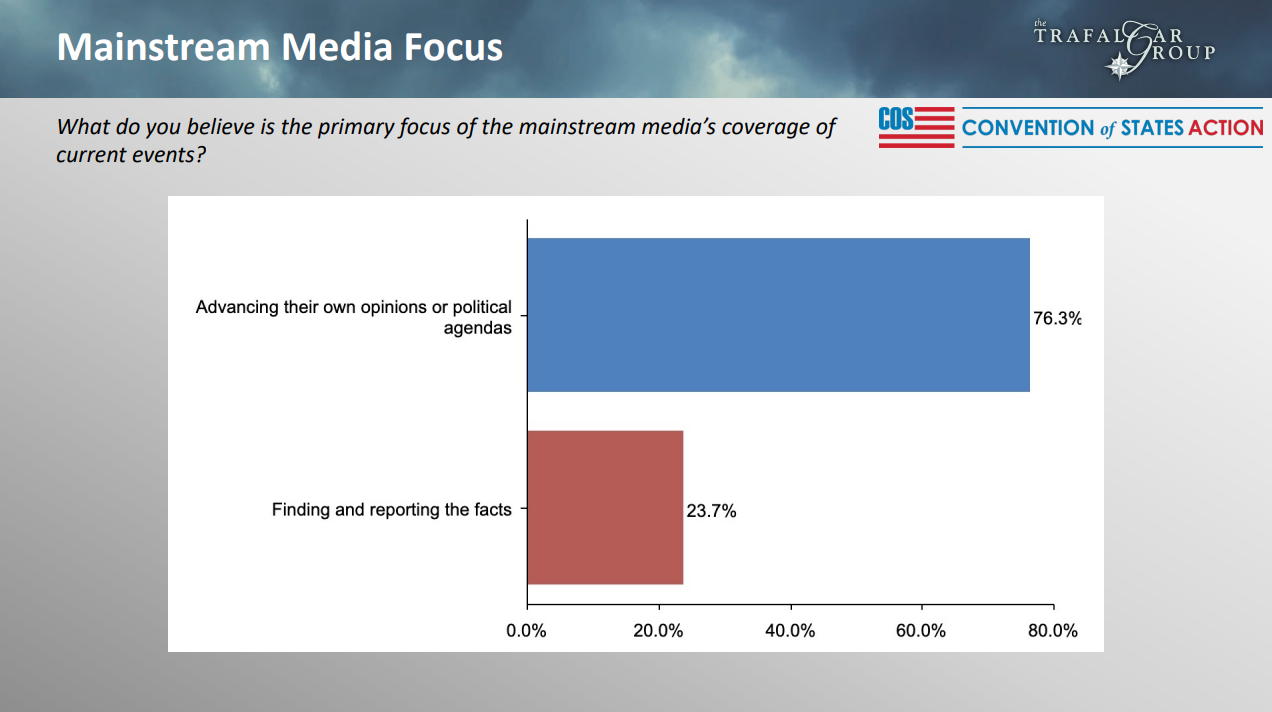 A Trafalgar Group poll on Americans’ trust in the mainstream media. (Daily Caller)

The Trafalgar Group was one of only two polling firms that accurately predicted Trump’s victory in the presidential election of 2016. The firm was also among the few that predicted Republican Florida Gov. Ron DeSantis’ win in 2018, as well as Republican victories in Virginia in November.

The poll is only the latest indicator of Americans’ loss of trust in the media. A June survey from the Reuters Institute for the Study of Journalism found that the U.S. ranked the lowest in trust for the media among 46 nations with developed media industries.

“This is an extraordinary (though unsurprising) finding,” journalist Glenn Greenwald said after the report’s release. “Most amazing is that the corporate sector of the US media is failing in every respect: financially, culturally, collapsing trust.”

The poll also shows a dramatic drop from the “new low” for trust in the media established in January 2021, when just 46% of Americans stated the media was trustworthy. The Trafalgar poll now puts that number at 23.7%.