President Joe Biden awarded the Medal of Honor to three Army soldiers on Thursday, two of whom died from wounds suffered during heroic actions during service.

“Our hearts are overflowing with gratitude today as we honor the unparalleled courage and commitment to duty and the indispensable, undisputable gallantry – it’s just hard to explain where your soldiers got the courage they got,” Biden said at the start of the ceremony, which took place at the White House.

Biden repeatedly lauded the soldiers’ courage during his speech, and this marked the first Medal of Honors given out by the president since the disastrous withdrawal from Afghanistan in August. Sgt. First Class Alwyn Cl. Cashe and Sgt. First Class Christopher A. Celiz died from injuries suffered in Iraq and Afghanistan, and their families stood to accept the medal from the president in their honor. Master Sgt. Earl D. Plumlee was the third solider awarded the Medal of Honor, and he stood at the White House on Thursday as the president draped it around his neck.

These are their stories:

Cashe, 35, was traveling in Iraq on Oct. 17, 2005 when the vehicle he was in came under enemy fire. An explosive device caught fire and Cashe pulled the driver out of the vehicle, soaking his own uniform with fuel and catching fire in the process. Despite being on fire, Cashe went back in and continued to pull soldiers out of the vehicle, rescuing six more.

Cashe’s heroism didn’t stop there. By request, he was the last to be evacuated by medical personnel as he wanted the others wounded in the attack to be taken care of first. His first words upon waking up in a Texas hospital, according to Biden, were: “How are my boys?”

Cashe died weeks afterwards and is the first African American solider to get the Medal of Honor since the Vietnam War, according to Biden, who dubbed him a “soldier’s soldier.”

“A warrior who literally walked through fire for his troops … He was a hero,” Biden said.

Celiz, 32, was in Afghanistan when enemies attacked an area he was clearing on July 12, 2018. Celiz was able to retrieve a heavy weapons system by exposing himself to enemy fire, and his actions allowed for the American forces to regroup.

Again, Celiz’s heroism continued – he then helped protect a wounded individual as they made their way to a medical helicopter and used himself as a shield so that it could take off. Wounded, he pressed for the helicopter to take off without him. Biden described Celiz as “courage made flesh.”

“He knew he was hit, but he waited for the aircrew to depart without him,” Biden said. (RELATED: Congressional Black Caucus Pushing To Posthumously Award Army Medic The Medal Of Honor) 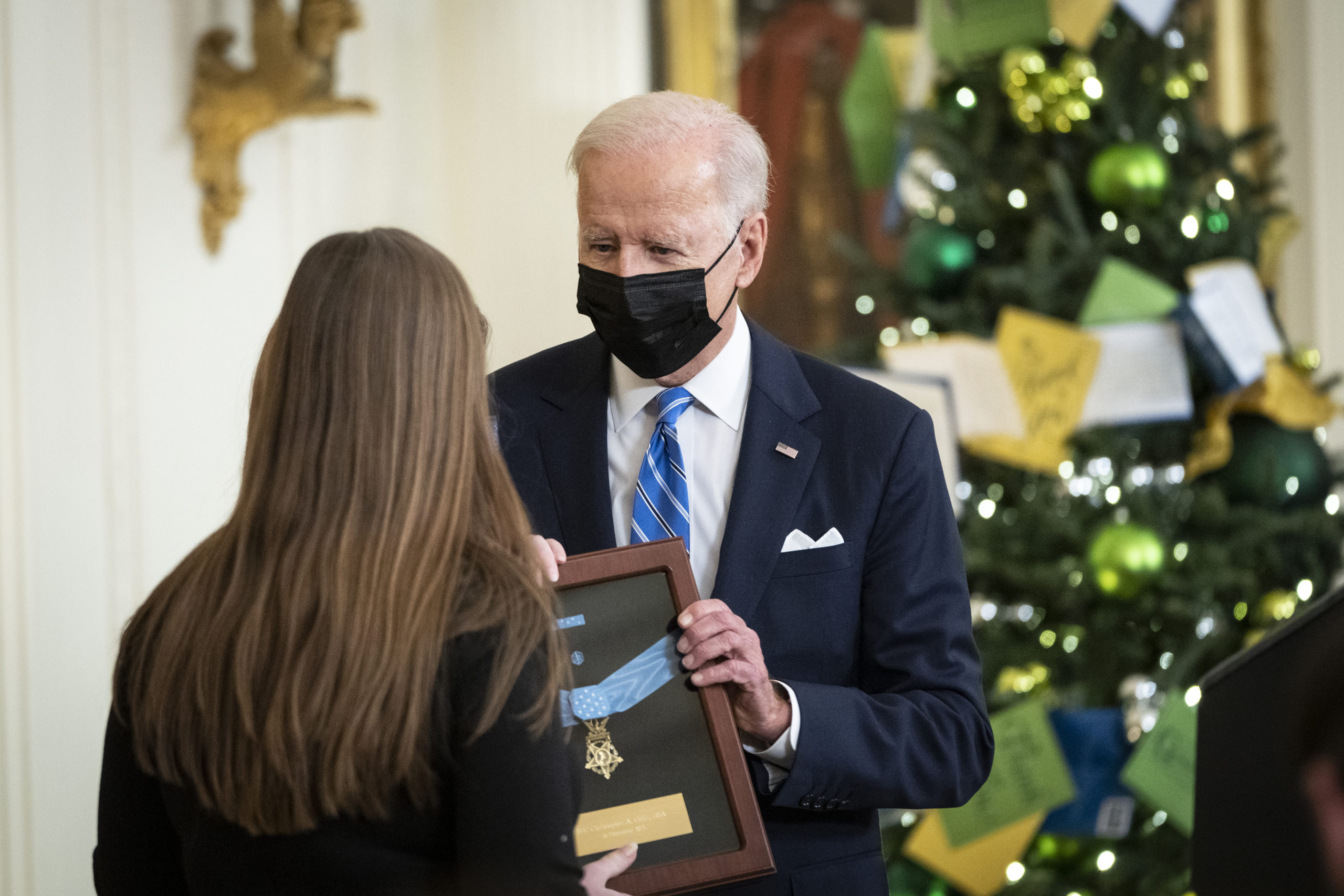 WASHINGTON, DC – DECEMBER 16: Katherine Celiz (L), widow of the late Sgt. 1st Class Christopher Celiz, accepts the Medal of Honor on his behalf from U.S. President Joe Biden during a ceremony in the East Room of the White House December 16, 2021 in Washington, DC. Sgt. Celiz was an Army Ranger and died fighting the Taliban in Afghanistan in 2018. He took on Taliban fighters to protect a helicopter that was carrying out a medical evacuation.(Photo by Drew Angerer/Getty Images)

Plumlee was in Afghanistan taking a picture at his base on Aug. 28, 2013 when a car bomb went off, blowing a hole in the wall of the base. Plumlee went to the blast site and was met with 10 enemy fighters wearing explosive vests entering the base. He ran towards rocket fire, killing one insurgent with a grenade and a second with a sniper shot.

Plumlee continued to press closer, using his body as a shield as the insurgents began detonating their suicide vests. At one point during the attack, Plumlee was injured after being thrown against a wall from a blast, but he got up and helped get a wounded soldier to safety.

Biden praised Plumlee for springing into action while under attack and called the recognition “too long in coming.”

“Bless Master Sergeant Plumlee, the Cashe and Celiz families, as the names of these men are etched into our nation’s proud history,” the president declared. “May their leadership and legacies mark the truest north for us to seek, and may we all strive to be strong and courageous in the face of challenges that life may bring.”