Two conservative Texas school board members are embroiled in a legal battle against their fellow trustees fighting their attempts to investigate and censure them, they told the Daily Caller News Foundation.

Mary Bone and Danielle Weston are up against the other five members of Round Rock Independent School District’s (RRISD) Board of Trustees, who are attempting to investigate and censure them for opposing their COVID policies and use of its police force to keep the public out of a Sept 14. board meeting, the two women told the DCNF. If the censure resolution passed, it would strip them of their powers and duties, restrict their access to school property and hinder their ability to do their job.

During Thursday night’s meeting, the school board initiated another attempt to censure Weston, separate from the original censure resolution involved in the lawsuit. The board passed both the first part of a three part censure process and a motion to launch an investigation into Weston’s emails.

In August, RRISD was still mandating masks for students, despite Gov. Greg Abbott’s Executive Order issued on July 29 that said no governmental entity, including school districts could require or mandate any person wear a face covering. 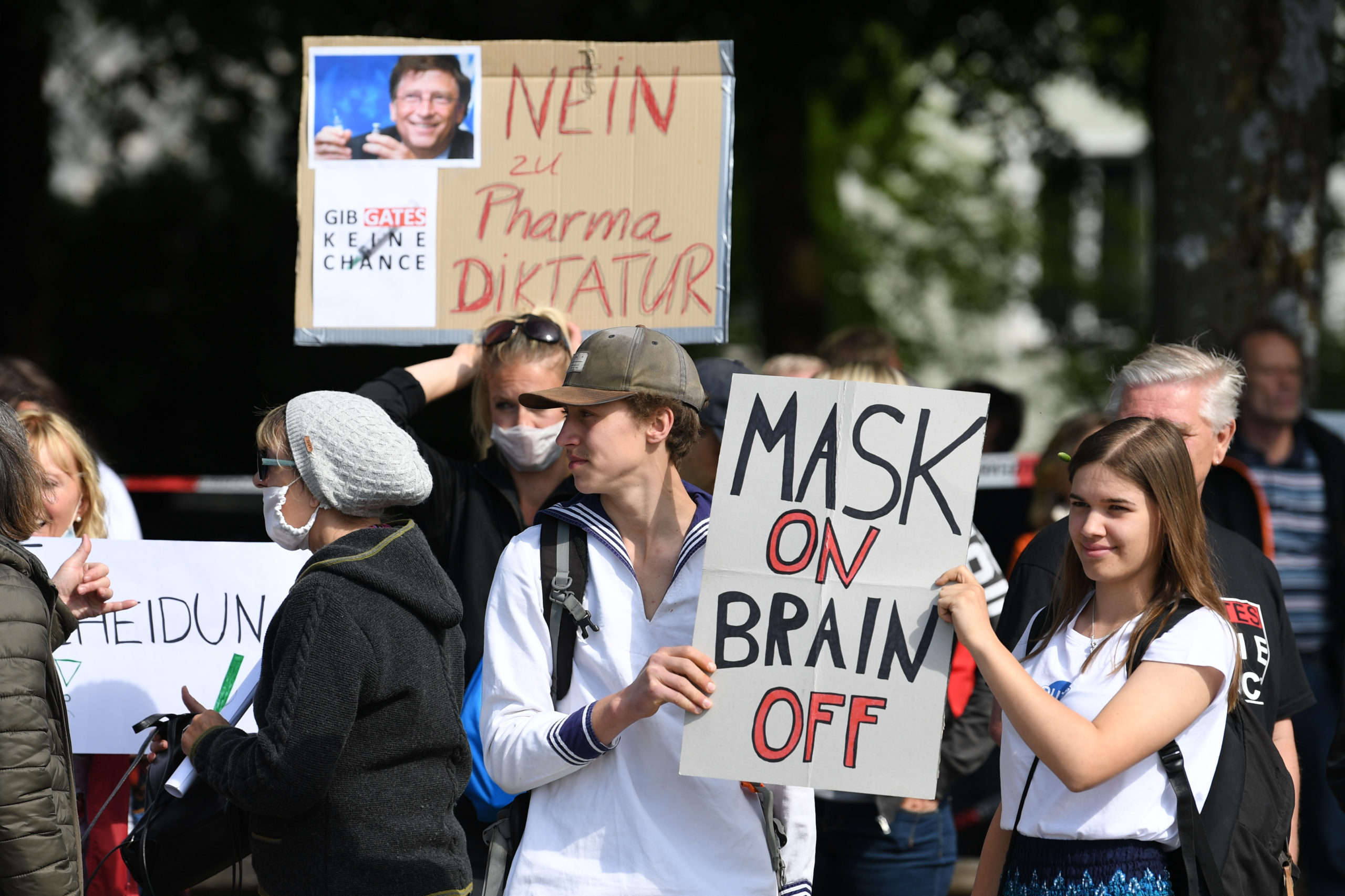 Protesters hold signs reading Mask on, brain off and I am not a conspirator, I am just a mother and Give Gates no chance during a protest of about 1000 people against lockdown measures and other government policies relating to the novel coronavirus crisis on May 16, 2020 in Munich, Germany. (Photo by Andreas Gebert/Getty Images)

Weston said she raised her concerns with the school board in August for not complying with the law.

Weston forwarded school board emails to government officials and community members in an attempt to get the district to comply, because she said they didn’t have the authority to require masks in RRISD schools.

Weston said since she and Bone have sued the other school board members for their attempt to censure them, they are now turning to other “mechanisms” to go after them. “Back in August no one cared about these emails, but now it’s ‘investigation worthy,'” she explained. (RELATED: Heated Confrontation At A School Board Meeting Ends Early When A Board Member Gets Punched In The Face)

The board claims Weston forwarded emails that were protected by attorney-client privilege while communicating with Texas Attorney General Ken Paxton, Williamson County Judge Bill Gravell and county attorney Dee Hobbs, along with community members, she told the DCNF. While emailing with community members, she blind carbon copied (BCC) people whenever she shared personal emails to make sure she in compliance with Texas law.

“If I just BCC people … it just simplifies things,” she told the DCNF. “So, they [RRISD Board of Trustees] didn’t like me doing that. They’re just they’re just complaining.”

Weston said the board was not able to articulate she had done anything wrong during the meeting Thursday.

“There are a total of three emails in question and some board members are asserting that two of them enjoy attorney-client privilege and that I should not have shared them with anybody without the approval of the entire board,” she said. “With regard to one of those emails, it is just a very threatening letter to me listing no specific dates, times, emails, actions etc that I supposedly did wrong.”

“It was vague and really only told me that I should not talk to members of the public,” she said. “This is not legal advice and me sharing it with others does not waive anyone on the boards attorney client privilege. In fact, Trustee Bone and I were the only ones who even received that email.”

Some Round Rock School board members said they are concerned that board member Danielle Weston sent confidential email form district attorneys in August out to 50 members of public.
Weston said the email was not confidential because it was meant to intimidate her.

At the end of the meeting, the board voted to investigate the trustees’ emails. Even though the board won’t explicitly clarify whose emails they are investigating, Weston told the DCNF they are specifically targeting her emails.

“They’re already combing through our emails, looking for when we said happy instead of glad, graveyard instead of cemetery … this is for two reasons: intimidation and retaliation for exposing what’s going on here,” Weston said.

Since they were elected to the board in November of 2020, they have seen that laws, policies and procedures often aren’t followed, Bone told the DCNF. They noticed that the lawyers who worked for the district “would just basically tell the board anything they wanted to hear.”

At a Sept. 14 school board meeting, public seating was limited to 18 chairs and the police were stationed outside the meeting room to keep the public out. For a district of over 50,000 students, Bone and Weston said they were shocked to see such a sparse number of chairs in a room that usually had at least 70 to 100 chairs.

“I go outside and the police are literally … not allowing people to come in,” she said. “At that point, there’s two children actually crying out in the hallway, two students … they’re crying and everybody’s kind of upset.”

One district lawyer told them the seating limit was “district policy,” when they asked why the room was set up with so few seats, the two mothers told the DCNF. When they asked to see the policy, the superintendent explained it actually wasn’t a policy.

Bone and Weston decided to leave the meeting because they believed the board was in violation of the Texas Open Meetings Act.

Four days later on Sept. 18, they said censure resolutions had been added to an agenda that was already posted, but they expected just a “slap on the wrist.”

“Fast forward to Monday, we actually get this into resolutions and they’re vicious,” Bone said. “They’re accusing us of breaking a law.”

They sued the other five board members who initiated the resolutions as part of the first step in the process and were granted a temporary restraining order by the judge hours before the Sept. 22 meeting, where the school board planned to vote on the censure resolutions.

“We’re spending all this time in our board meetings on this where they’re now going to use taxpayer dollars instead of educating kids, to investigate me because I’m basically the crime of being too transparent,” Weston said. “The board is paralyzed by politics and they are obsessed with silencing people who question them … whether it’s the school board members or parents.”

“I think school boards are used to running this way,” Bone said. “I don’t think this is something new. I think it’s just been exposed through people engaging in their school boards and asking for transparency and accountability.”

“Last year, with virtual learning and isolation and quarantine … we understand the suffering that these children have endured,” Weston said. “Whether it’s historic academic learning loss, whether it’s struggling with their mental health, we know the damage that has been inflicted on our children.”

Bone and Weston told the DCNF that they have spent almost $50,000 on legal fees with their personal and community-raised money, but their goal is simply to serve children and focus on education.

When the school board spends time writing censure resolutions, they are hiring lawyers with taxpayer money that will never reach the classroom, they said. The district has a yearly budget of over $460 million, which creates an environment of “cronyism,” as the district uses its budget to build and buy things that aren’t immediate necessities, Bone said.

Bone and Weston have a hearing for their lawsuit and temporary restraining order on Dec. 22, where the judge will decide if the case can move forward to the discovery phase.

“As we go into 2022, our community can look forward to these five school board members continuing to spend time, energy and money in trying to silence Mary and I,” Weston said.

RRISD did not respond to the DCNF’s request for comment.