Freedom kicked off the lengthiest interview he has done in the past few months by reacting to universities across Hong Kong removing statues commemorating the Tiananmen Square Massacre in which the Chinese government killed 10,000 pro-democracy protesters.

“What’s happening over there is heartbreaking, and we need to do whatever we can to raise awareness,” said the Celtic’s big man.

During the night, CCP officials removed the Pillar of Shame from the University of Hong Kong, which memorialized all those Chinese who were killed by their government during the Tiananmen Square Massacre.https://t.co/FDoz3MwGIK pic.twitter.com/rel8InPkK9

The NBA player then slammed athletes like LeBron James and Colin Kaepernick, along with American “social justice companies” like Nike that are quick to stand for causes like Black Lives Matter and #StopAsianHate, but “remain silent” when it comes to Chinese human rights abuses. Freedom said that “it doesn’t matter how much money is involved” because “while we’re talking right now there’s a genocide happening,” referring to Chinese Communist Party detention camps filled with Muslim Uyghurs and other ethnic minorities. (RELATED: Leaked Documents Show Chinese President Xi Ordered Uyghur Genocide In ‘Top Secret’ Speeches) 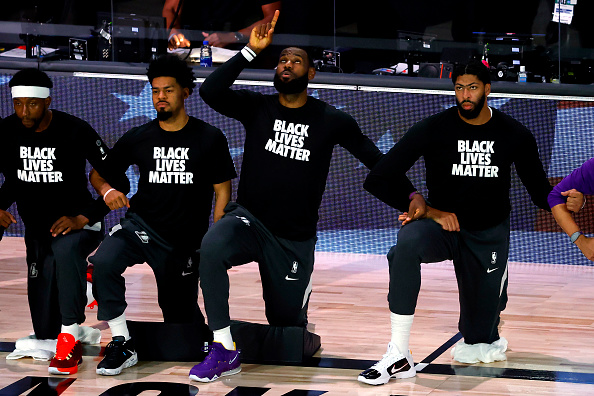 LeBron James #23 of the Los Angeles Lakers kneels during the national anthem during the 2020 NBA Playoffs. (Photo by Kevin C. Cox/Getty Images)

The interview shifted gears as Freedom disavowed the “culture wars,” explaining that “when it comes to attacking each other, whether it is to gain more votes or retweets or publicity, then it is just not good for the country.” Freedom emphasized that he will “go on any media outlet” because he “want[s] every part of the country to hear [his] message.”

“I’m not a Republican or a Democrat. I don’t have a side. I don’t do politics; I do human rights.” Freedom believes that his message could be one of the few things to unify a fractious American body politic. “There’s no right, left, east, west in human rights, there is only one human race, and we need to stand up for those innocent people.”

Freedom, whose goal is to reach as diverse of an audience as possible, dove into the challenges of trying to get his message across on legacy media platforms that may have conflicting interests. The human rights advocate, who has appeared numerous times on MSNBC and CNBC, was “sad” to learn for the first time during the interview that NBC was hosting the 2022 Beijing Winter Olympics on its platform. He has repeatedly called for a boycott of the event.

After the NBA player became a U.S. citizen and changed his last name to Freedom, he said right-leaning media began to focus more on his pro-American sentiments, sometimes not even asking him about his human rights advocacy during live interviews. “If they are going to mention my last name, please mention all of the human rights violations that are happening not just in Turkey in my home country but all over the world,” he said. (RELATED: Enes Kanter Changes Last Name To ‘Freedom’ Ahead Of Becoming US Citizen)

Freedom has traveled every year to Washington, D.C., for a decade to meet with both Democratic and Republican legislators, telling all politicians with whom he encounters, “I don’t want to do politics, I don’t want to take a picture and post it out there so people think I’m from this side or that side. I really want to bring awareness about what’s going on and find a solution. Not just talk about it but be about it.” Although having met with Democratic Massachusetts Senator Elizabeth Warren and then-Vice President Joe Biden to advocate Turkish human rights in the past, the NBA player is stumped as to why Democratic politicians do not take as hard of a public stance on Chinese human rights abuses as they do on social justice issues in the U.S.

Thank you for supporting innocent people in Turkey, standing tall for Democracy, Freedom, Human Rights and standing against Dictatorship in Turkey from day one. pic.twitter.com/Ev0asqSbpm

With the precipitous withdrawal from Afghanistan likely to result in millions of Afghans starving to death this winter, and a possible Russian invasion of Ukraine, Freedom recounted that the Biden administration “promised that they were going to prioritize human rights” “not just in America but all over the world.” Freedom said that when he sees America fail, it “breaks [his] heart,” but added he is “still waiting” and “still hopeful” for the Biden administration to protect human rights on the global stage. He urged the Biden administration to protect Taiwan by arguing that “all of the countries out there are seeing America as an example” that sets a standard for “democracy” and first amendment freedoms. He recommended sanctions, democratic reform, boycotting slave labor items and diplomatic pressure as adequate countermeasures the U.S. government should take to combat human rights-violating governments.

Freedom delved into how experiences with family and attending a secular Muslim “Gülen” school in Turkey helped shape his values growing up. Living in the U.S. as an outside observer of the human rights abuses in his home country refined his beliefs on liberty. Freedom has not seen his family in years after criticizing authoritarian Turkish President Erdogan resulted in backlash. Over the last few years, the Turkish government tried to capture the NBA player in Indonesia, revoked his passport in Romania, and placed him on an Interpol list. Throughout this saga with the Turkish government and in the present, Enes said his family faces discrimination in Turkey and was forced to disown him. Freedom’s father, Professor Mehmet Kanter of Istanbul University, was sentenced to 15 years in a Turkish prison under “terrorism” charges, but he was released after seven years partly due to the spotlight the NBA player put on his case.

-Haven’t seen or talked to my family 5 years
-Jailed my dad
-My siblings can’t find jobs
-Revoked my passport
-International arrest warrant
-My family can’t leave the country
-Got Death Threats everyday
-Got attacked, harassed
-Tried to kidnap me in Indonesia

FREEDOM IS NOT FREE

At the end of the interview, Freedom said he would love to start a “Freedom Foundation” and agreed to accept a custom “Free Hong Kong” Houston Rockets jersey as an auction item at the first fundraiser in exchange for a “Freedom” jersey. After being stuck at home in NBA COVID-19 protocols for the past eight days, the NBA player had not yet considered his New Year’s Resolution but settled on wanting to “learn more and listen more,” and advocated people around the world do the same.