Democrats four years ago rode a blue wave to governors’ mansions across the country, flipping Republican-held seats in the Midwest, Northeast and West alike.

Now, however, many of those governors face Republican challengers amid a political environment that looks potentially promising for the GOP, meaning that contentious races may lie ahead in some of the nation’s most pivotal battleground states. Republicans have already had two strong showings in states that lean Democratic, flipping the governor’s seat in Virginia and coming surprisingly close in New Jersey, a state that voted for President Joe Biden by 16 points in 2020.

Governors in less competitive states are also facing primary challengers from the left and right, making for multiple bitter, closely-followed primaries between candidates from different wings of the same party.

Below are states whose races are worthy of following as the 2022 election cycle kicks into overdrive.

Thrown into the center of the political universe in 2020, Georgia is set to remain there in 2022 and beyond. After the state narrowly voted for Biden and Democrats just weeks later flipped both Senate seats — giving Democrats control of the chamber — Georgia Republican Gov. Brian Kemp now faces both a serious Democratic challenger as well as one from within his own party.

Kemp drew the ire of former President Donald Trump after he refused to overturn Biden’s win in the state. Now, former Republican Sen. David Perdue is seeking to oust Kemp, and Perdue has Trump’s backing.

Perdue has alleged that Kemp divided Republicans in the battleground state, going so far as to blame him for his own loss to Democratic Sen. Jon Ossoff in January. While one Atlanta poll showed Kemp with a lead over Perdue, the race became a dead heat after respondents were notified of Trump’s endorsement.

Whoever wins the state’s May primary (or June runoff, if it comes to that) will likely face Democratic candidate Stacey Abrams in November. Abrams narrowly lost to Kemp in 2018, and she has since built a wide national profile.

Georgia Gov. Brian Kemp speaks on Jan. 5, 2021 in Atlanta, the night Democrats flipped both of the state’s Senate seats and with it control of the chamber. (Alex Wong/Getty Images)

Secretary of State Katie Hobbs is the Democratic frontrunner. She has repeatedly spoken out against Trump’s claims that the 2020 election was stolen, especially as the Republican state Senate sponsored a Trump-endorsed audit of the votes in Maricopa County.

While general election polling has been scant thus far, the race could be close in a state that Biden barely flipped in 2020. Democratic Sen. Mark Kelly also faces re-election in 2022, setting the stage for two consequential races.

Democratic Gov. Gretchen Whitmer won in a landslide in 2018, and she developed a national profile as her stringent coronavirus policies led her to become a frequent target of Trump. In particular, Whitmer’s personal violations of her own public health policies have made her a top GOP target since she took office.

The leading Republican challenger is retired Detroit police chief James Craig, but the GOP field is far from settled. Wealthy businessman Kevin Rinke recently announced a bid and has the ability to self-fund his campaign, and Trump-tied Tudor Dixon is also running, though both are polling behind Craig.

Two-time Senate candidate John James was also briefly rumored to be mounting a bid early on, but he opted out. Now, with the release of Michigan’s new congressional map, Republicans are reportedly urging James to run in the new 10th district, a seat on metro Detroit’s east side that narrowly went for Trump in 2020. (RELATED: Michigan Approves New US House Map, Two Democrats Say They’ll Run Against Each Other Minutes Later)

Democratic Gov. Tony Evers denied former Republican Gov. Scott Walker a third term in 2018, but the Republican state legislature moved almost immediately to limit his powers. Evers’ reelection effort may be close in a state that Biden won by just over 20,000 votes in 2020, while the Badger State also features a Senate race that could decide control of the 50-50 chamber.

Republican Rebecca Kleefish, Walker’s lieutenant governor, has emerged as an early frontrunner, but the eventual nominee is far from decided. Kevin Nicholson, who briefly tried to oust Democratic Sen. Tammy Baldwin in 2018, also may run, and while Trump has reportedly urged former Rep. Sean Duffy to launch a campaign, Duffy has not announced a campaign. (RELATED: ‘Run, Ron, Run!’: Trump Endorses Sen. Ron Johnson Before He Even Announces He’s Running) 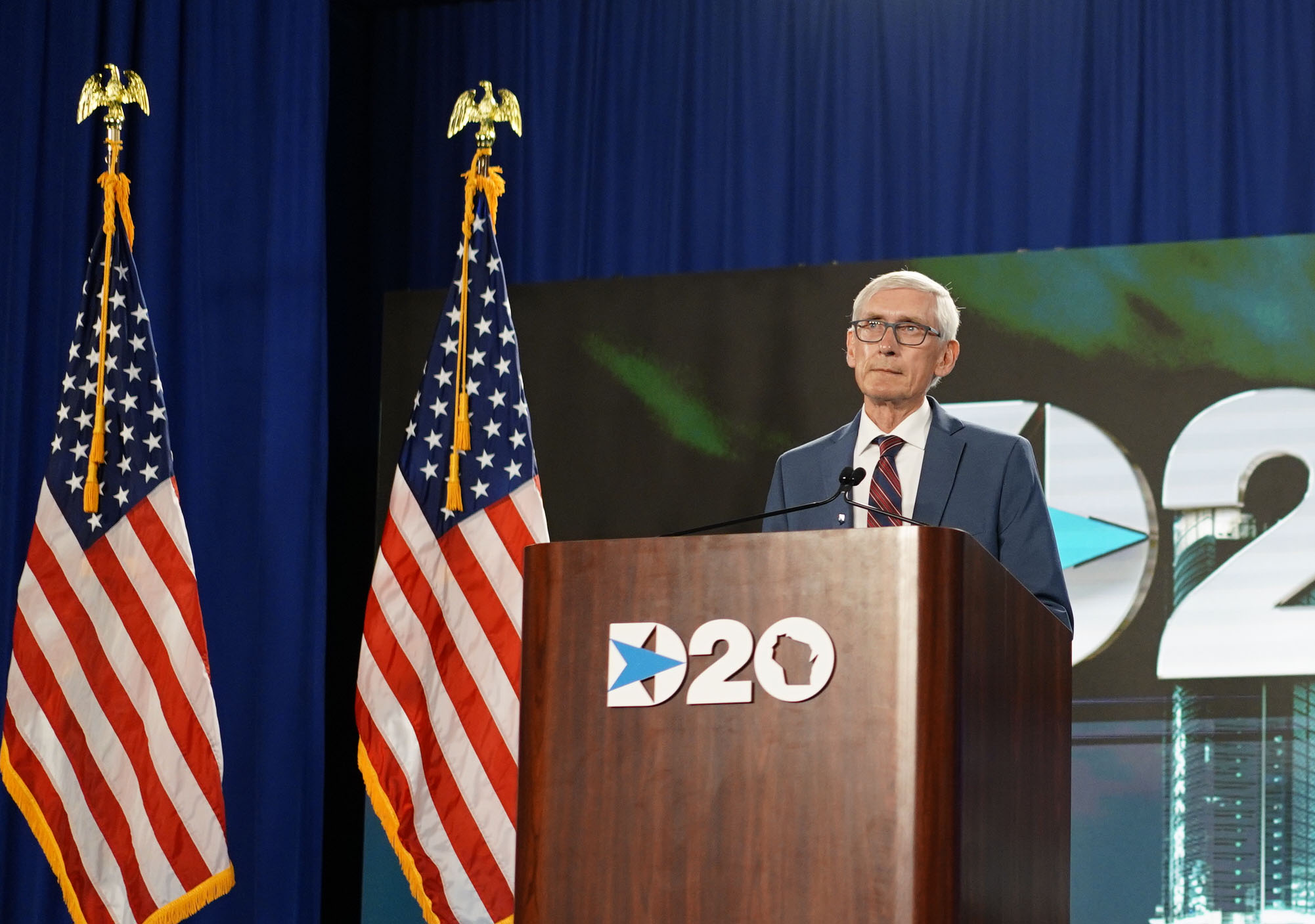 Democratic Gov. Steve Sisolak flipped the governor’s seat in 2018, and while the state has been friendlier to his party than to Republicans in recent years, it remains a hard-fought battleground nearly every election cycle. Former Republican Sen. Dean Heller, who lost his seat to Democratic Sen. Jacky Rosen in 2018, is now seeking a political comeback, and Heller is favored to win the nomination.

While most polls show Sisolak with a narrow lead, several Republican-leaning surveys have given a wider lead to Heller or Clark County Sheriff Joe Lombardo, though he trails Heller in name recognition.

While DeSantis has been rumored to be a 2024 presidential candidate, multiple Democrats are first trying to deny him a second term serving in Tallahassee. Agriculture commissioner Nikki Fried and former congressman and Gov. Charlie Crist are the top two contenders for the Democratic nomination, though polls show DeSantis with a healthy, but not impregnable, lead as Republicans look to continue their electoral success in the state.

Though Gov. Tom Wolf is term-limited, Democrats are rallying around Attorney General Josh Shapiro to succeed him. Shapiro outran Biden in 2020 on his way to getting reelected by five points, and other potential contenders, including Lt. Gov. John Fetterman and Rep. Conor Lamb, opted to run for Senate instead.

The Republican field, however, includes multiple candidates who seek to tie themselves to Trump and his discredited claims that the state’s 2020 election results were rigged. State Sens. Doug Mastriano and Jake Corman are both vying for the nomination as is former Rep. Lou Barletta, who ran an unsuccessful campaign against Democratic Sen. Bob Casey in 2018.

While Republicans may have little chance of winning the governorship in the solidly Democratic Empire State, multiple Democrats have launched primary campaigns against Gov. Kathy Hochul, who took over for former Gov. Andrew Cuomo in August. Hochul has earned praise from several of the state’s most influential figures, including Senate Majority Leader Chuck Schumer and New York City Mayor-elect Eric Adams, but she has not shielded her from members of her party who are trying to block her from being elected to a full term.

Among those are Rep. Tom Suozzi and New York City Public Advocate Jumaane Williams, who represent the moderate and left wings of the party, respectively. Attorney General Letitia James also announced a challenge before reversing course, and outgoing Mayor Bill de Blasio has flirted with a potential bid.

Though Hochul has led in recent polls, she has not clinched the nomination, and whoever wins the state’s primary will enter the general election as the heavy favorite over the GOP nominee. 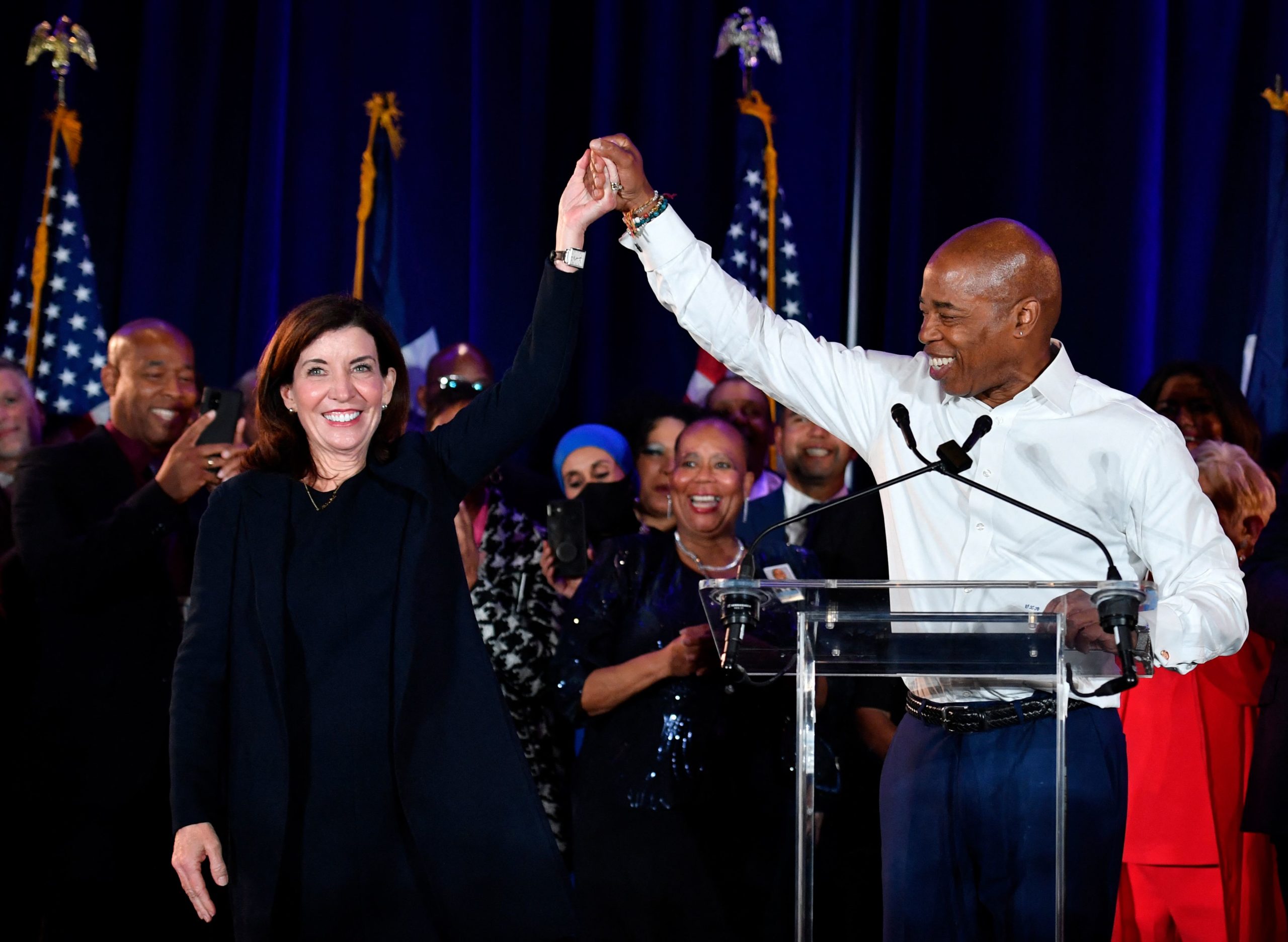 Odd Ones Out: Kansas and Maryland

Simply put, Kansas is to Democrats as Maryland is to Republicans.

Democratic Kansas Gov. Laura Kelly won in an upset over Republican Kris Kobach in 2018, but now she is one of Democrats’ most vulnerable incumbents in the solid-red state. Kelly is also likely to face Kansas Attorney General Eric Schmitt in the general election, a candidate with fewer vulnerabilities than Kobach.

Maryland Republican Gov. Larry Hogan is term-limited in 2022, making the GOP’s effort to hold the seat much more challenging in a state that Biden won by 33 points in 2020. Hogan built a national profile as a moderate that sometimes clashed with the Trump administration, and he endorsed Secretary of Commerce Kelly Schulz to succeed him. Trump, however, endorsed state lawmaker Daniel Cox, but the former president remains unpopular in the Old Line State, and Cox would likely have almost no chance at winning in the general election.

Ohio and Texas: GOP Primaries that Could Get Testy

While Ohio Gov. Mike DeWine and Texas Gov. Greg Abbott are both favorites to win reelection in their Republican-leaning states, both face primary challengers from the right that have labeled them as insufficiently conservative.

DeWine faces a challenge from former Rep. Jim Renacci, who criticized DeWine’s coronavirus restrictions early in the pandemic and subsequent mandates in an effort to contain the virus. If DeWine prevails, he would face either Nan Whaley or John Cranley, the mayors of Dayton and Cincinnati, respectively. (RELATED: Ohio GOP Lawmakers Launch Bid To Impeach Gov Mike DeWine Over Coronavirus Mandates)

Abbott lifted coronavirus restrictions earlier than almost any GOP governor, but that was not enough to dissuade Allen West, a former congressman from Florida and a one-time chair of the Texas Republican Party, from seeking to oust him. Abbott also faces a challenge from state Sen. Don Huffines.

Abbott is still favored to win the nomination, and if he does, he will likely face former Senate and presidential candidate Beto O’Rourke in the general election.