Pope Francis called attention to the “selfishness” of couples who choose to have pets instead of having children in his general audience Wednesday at the Vatican.

“The other day, I spoke about the demographic winter there is nowadays, in which we see that people do not want to have children, or just one and no more,” the pope said in Rome.

“And many, many couples do not have children because they do not want to, or they have just one — but they have two dogs, two cats,” Pope Francis continued. “Yes, dogs and cats take the place of children.”

This “denial of fatherhood or motherhood” reduces people’s humanity and leads to an aged civilization, the pope stated. (RELATED: Pope Francis Shares His Advice For Married Couples)

While acknowledging that questions such as how the lack of children will affect pension payments are sometimes met with laughter, the pope said this statement contains truth. 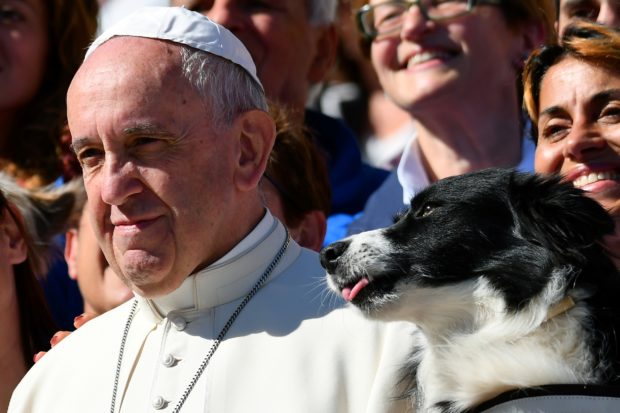 Pope Francis poses for a picture next to a dog after his general audience in St. Peter’s square at the Vatican on October 5, 2016. (Photo by VINCENZO PINTO/AFP via Getty Images)

“Fatherhood and motherhood are the fullness of the life of a person,” the pope added, going on to advise married couples to consider having children or adopting.

“And also, if you cannot have children, think about adoption. It is a risk, yes: having a child is always a risk, either naturally or by adoption,” the pope said. “But it is riskier not to have them.”

Pope Francis offered his remarks during a general audience about Saint Joseph, part of a series focused on the father of Jesus, according to Vatican News.

The Pope made similar comments in 2014, when he stated that choosing pets over children was “another phenomenon of cultural degradation,” BBC reported.